The year is 2001. You are in a brand-new, state-of-the-art library. Over the hushed whir of computer fans and the muted sound of footsteps on the carpeted floor, you hear a librarian say, ever so quietly: “Please wait while the information you requested is being downloaded.”

With the groundbreaking for WVU’s new downtown campus library facility on June 20, and numerous library improvements underway campus-wide, a scenario like this is not idle speculation. The future of libraries at WVU is now.

So, what will the new libraries be? Already the Internet, on-line databases, CD-ROMs, and other technologies have changed the way libraries store and access information. Whether filled with books, journals, computers, or all of the above, the WVU Libraries are the center of the University, with facilities, personnel, and information resources to inspire and support serious learning and research.

That research is conducted much differently than in years past, says Jo Ann Calzonetti, head of WVU’s Evansdale Library. Most people know that the WVU Libraries catalog and many databases are on-line, and that today’s reference rooms are lined with computer stations as well as card catalogs. But, much more has changed, or will change soon. 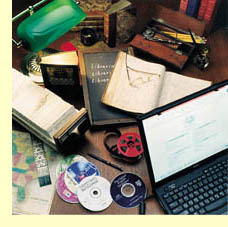 “At Evansdale, students or faculty members can borrow a laptop computer from the circulation desk and use it anywhere in the library,” says Calzonetti. The laptops are connected to the library’s main computers by wireless technology. Users can search the World Wide Web or on-line databases, use a word processing or spreadsheet program, or search through bibliographic records. Evansdale Library bought 10 of these special laptops as a pilot project, and users love them. Soon, they will get 20 more.

Much more information is now available at the WVU Libraries in electronic form, including the full text of many newer journal articles. According to Calzonetti, a user can access the electronic databases to find a reference to an article, click a button on the computer screen, and read, print, or download the entire text. In the past, users had to find references to journal articles, then hunt for the journal in print form to see the full text. That involved browsing around in the library stacks, making a trip to another campus library, or, if the journal was not available on campus, putting in a request for it through interlibrary loan and waiting.

In the recent past, a user might wait two weeks or more to get materials through interlibrary loan. Books still take a while. But, using document scanning software, librarians can now get some materials much faster. According to Calzonetti, “Librarians can scan a journal article into the computer, then send it electronically to the library from which the request came. It might take only a day or two. In an emergency, we can sometimes get an article from another library in less than an hour.”

Another service made possible by new technology is electronic reserves, which are now available at the Colson Hall Library. Instructors can scan materials they want to make available to their students—such as tests, notes, or articles—and give students a password to access them from their own or WVU computers.

The Internet, of course, is revolutionizing information access. “Some people think that everything you need is on the Internet,” says Nancy Davenport, a WVU alumna who is director of acquisitions at the Library of Congress. “The Internet is a great resource, but it is not indexed.”

WVU reference librarians can be extremely helpful at narrowing such searches. They know how to help library users find and use all available resources, including the Internet.

Over the past 25 years, according to Calzonetti, an “unbelievable sea change” has occurred in the way librarians work. She says that librarians have been at the leading edge of developing ways to apply new information technologies—streamlining the process of cataloging, storing, and accessing information, and developing better ways to share resources.

“Librarians have been in the forefront of implementing the new technologies and seeing the possibilities,” says Calzonetti, “and this is definitely a trend that is going to continue.”

Frances O’Brien, who became the new WVU Libraries dean on June 16, says that “the challenge for the coming years is to move ahead with fresh initiatives in a rapidly-changing information world, and at the same time continue to provide better traditional resources and services.”

Now more than ever, students expect access to the very latest information in a field of study as well as older scholarly sources. “To get this information, I use books and journals as well as the Internet and on-line catalogs,” says Michele Molinari, a higher education administration graduate student. “Having all these resources available in one place saves valuable time.”

Public relations senior Phil Caskey agrees. “If the library doesn’t have a certain item I need,” he says, “some articles and sections of books can be printed right from electronic databases.”

For students, libraries fill an important social need, too. Students want to interact with other people, and many of them enjoy the atmosphere in the campus libraries.

Cynthia Fallon, a foreign languages and computer science senior, says that “especially when I lived in the residence halls, I went to the library every night. I needed a place where I could concentrate on what I was doing, but wasn’t locked away, isolated in some room.”

According to Gerald Lang, WVU provost and vice president for academic affairs and research, “It’s not about discarding all the books and making the library into a computer lab. A modern academic library must bring together information in all forms—electronic and paper-and allow easy access.”

Bringing the new and old together in one place, in service of the overall mission of the University, is what the modern academic library is all about, says Lang.

“Now more than ever before, the library is the center of information management and retrieval, responsible for both traditional and new forms of information,” he says. “The WVU Libraries are vital to creating and maintaining an intellectual environment, nurturing student learning, fostering research, and supporting economic development as part of the University’s statewide mission.”

Frances O’Brien, WVU’s dean of libraries since June 16, recognizes that technology and the needs of society—today and in the future—will soon make the musty, dusty library a historical relic. Especially at WVU, where library facilities are being expanded and improved. “I’m afraid that the days of serendipity in the stacks will be largely gone,” O’Brien says, referring to the old tale of the professor who discovered the focus of his life’s research when a book fell on his head as he browsed the stacks. “I like the stacks, myself—the feel and the smell of books. But the fact is, on-line information is getting better, and it will improve more as further research is completed on how best to deliver on-line resources. And there will certainly be behavioral changes in the way scholars do research.” 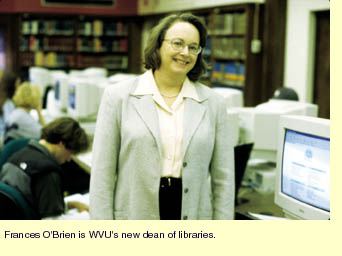 O’Brien, who was born in Roanoke, Virginia, retains a subtle accent that she calls “standard south-west Virginia.” Her father attended WVU in 1927-28, and she, a Virginia Tech graduate, earned a master’s in library science at Peabody College and an MBA at the University of Georgia in 1979. She has worked in academic libraries since 1973.

She was deputy university librarian at the University of Illinois at Urbana-Champaign before being named dean of WVU Libraries. She replaces Dr. Ruth Jackson, who left in December 1998 after a 10-year administration that achieved the computerization of many library resources.

O’Brien is concerned about the impact on library users and librarians of the enormous changes taking place in modern libraries. “It will be a long time before the Library of Congress fits on the head of a pin,” she says. “We’re going to be running two libraries for a long time. We’ll still need to take care of print materials and, at the same time, we have to figure out how to move ahead with technology. We don’t have to choose between the two—the question is: How do we serve clients with both?

“A collection of data on-line is not a library,” she says. “A library has people, interactive services, not just access mechanisms. Technology extends the library’s reach. But the challenge is that we don’t lose our experience of face-to-face interactions.

“Human interaction should be a cornerstone in education. There must always be a place for instruction in libraries. We’re pretty good about talking with people at the reference desk in a non-threatening way. Now, how do we translate this to on-line services?”

The culture of librarians is changing along with library facilities and their holdings. O’Brien remembers how, at the University of Tennessee in the early 1970s, librarians observed a ritual surrounding the card catalog. Every morning, library staff placed the cards of new acquisitions in the catalog above the metal rods in each drawer that held the cards in place. Then, librarians checked their placement and moved each card to a permanent position below the rod. This ritual allowed time to discuss the profession, a chance for elders to pass their knowledge to novices, a time for librarians to become colleagues. “Librarians don’t file cards anymore. All of a sudden that wonderful ritual, that very personal way to start a day, is lost,” O’Brien says.

“I know the importance of recognizing employees as your most important resource. I look forward to working with WVU librarians and staff in becoming more customer-driven and continuously examining what we do, how and why we do it, to deliver high-value, high-quality library service,” she says.

And, in joining the student-centered learning community that is WVU, O’Brien understands that service to students in a rapidly-changing environment is paramount. “I want the WVU Libraries to help give students the foundation they need to understand and use the concepts and tools of information technology. We will give them the opportunity to become information literate—to find the information resources they need and to learn the form, format, location, and access methods for a diverse set of resources relevant to the work of today’s scholars and practitioners.

WVU’s main library, officially named the Charles C. Wise Jr. Library, was built in 1931 to support a student body of 3,500 and a 300,000-volume collection. Today, 10 libraries around campus provide 22,000 students with access to over 1.3 million volumes, with technology adding millions more.

The University has begun a $33 million library building project as part of the WVU Master Plan. The project includes construction of a new library facility adjacent to Wise Library, renovation of the Evansdale Library, and construction of an off-site storage facility.

When the project is completed, the WVU Libraries will provide optimal seating and study areas, ample space for books and book preservation, and state-of-the-art technology for accessing and distributing library resources.
According to Provost Gerald Lang, “The enhancement of the WVU Libraries is essential for the University to continue its mission of service to the state and to maintain its status as a Carnegie I research institution. An effective library system is also vital in attracting top faculty members, and producing students who are prepared to function in a global society.”

The University’s $33 million investment will help introduce a new era for the WVU Libraries. The funds will not, however, enable the WVU Libraries to meet fully the needs of students and faculty into the 21st century. Private support is being sought to cover some of the cost of construction projects, computer equipment, furnishings, and-importantly-collection development.