WVU students looking to kick back, grab a snack and use a Mac can do it all on the newly renovated first floor of the Evansdale Library.

The university celebrated the completion of the $500,000 renovation project Thursday with an open house. Jo Ann Calzonetti, director of the Evansdale Library from 1994-2001, was among the speakers featured at the event, according to the WV press release.

Calzonetti, who is now in charge of the University of Akron’s Science and Technology Library, discussed the changes at the facility. Among other things, WVU added new carpeting, movable furniture, study rooms and a service desk that combines circulation, reference and technical services. 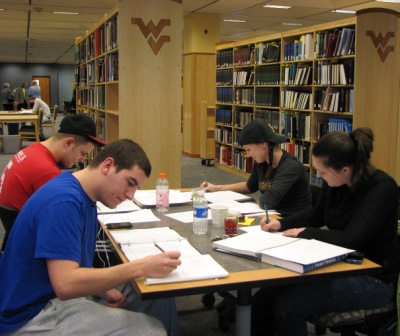 Evansdale Library Director Mary Strife said the renovations were based on student input, and she’s received positive feedback so far. She said students particularly like the display areas reserved for student work and the facility’s new blue-and-gold color scheme, though some were thrown by the new look.

“Some of them said, ‘Are you still a library?’ ” Strife said, laughing.

WVU senior Abby Hess, 31, of Grafton, said she likes the facility’s calming colors and the new snack area, which gives students access to vending machines, coffee and a microwave while they’re studying.

“It’s all new, and it feels really comfortable,” said Hess, who’s majoring in speech pathology and audiology. “It’s a nicer atmosphere. It’s not outdated like it was before.”

Terry Weimer, a 23-year-old senior majoring in psychology, said he likes the technology available to students. The Evansdale Library added six desktop Macintosh computers and five MacBook laptops to its arsenal as part of the renovation project.

“They have more computers for students to access,” Weimer said. “Since they renovated White Hall downtown, it’s kind of hard to find computers, and this is a good place.”

WVU closed the underused White Hall Computing Center to create more space for the physics department, which will move into the building after a $33 million renovation project is finished in fall 2011.

Strife said most of the renovations at Evansdale Library wrapped up late last November, but WVU Libraries Development Officer Monte Maxwell said officials opted to wait until after the spring semester began to celebrate with an open house.