Broadsides tacked on buildings and telegraph poles spoke to the fierce debate swirling around western Virginia at the start of the Civil War in 1861. While one poster rallied citizens to follow their brothers in Richmond and join the Confederacy, another called for people to remain loyal to the United States and stand firm against their treasonous eastern brethren. 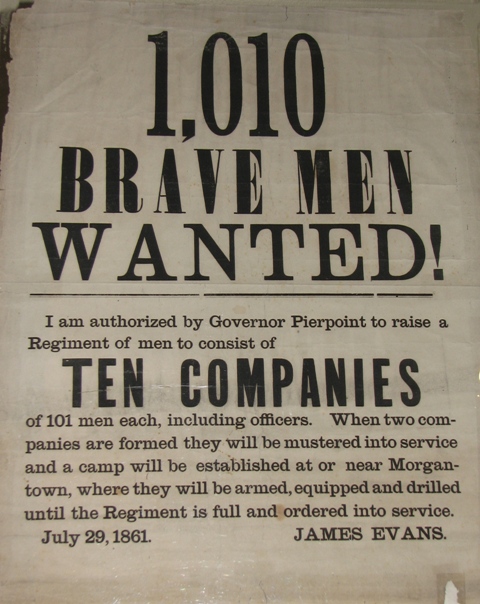 A broadside posted in Morgantown by Gen. James Evans at the start of the Civil War.

What transpired between the start of the Civil War and two years later when President Abraham Lincoln welcomed the 35th state, West Virginia, into the Union will be the focus of the annual West Virginia Day Celebration presented by the West Virginia University Libraries and the WVRHC on June 20.

Activities begin at 9:30 a.m. with a reception in the Wise Library’s Milano Room. At 10 a.m., distinguished historian and author Dr. John E. Stealey, III will talk about the political developments that took place in western Virginia in 1861 in response to the Richmond government’s secession.

Stealey, a history professor at Shepherd University, is an authority regarding the conventions and events that led to the establishment of the Reorganized Government of Virginia and the new state of West Virginia. He has written or contributed to several books and articles that pertain to this critical period of West Virginia history. His article, “West Virginia’s Constitutional Critique of Virginia: The Revolution of 1861-1863,” appears in the current issue of the journal Civil War History.

Following his talk, the WVRHC will open its exhibit. On display will be artifacts and documents concerning the Civil War and the birth of West Virginia including:

The WVRHC will also use the event to launch its online version of the Francis H. Pierpont Civil War Telegram Series. Pierpont served as governor of the Reorganized Government of Virginia. The collection consists mostly of telegrams received by Pierpont between 1861 and May 1863. A majority of the communications concern military matters, including one from Gen. George McClellan requesting Pierpont to appoint military officers.

Along with viewing actual telegrams, visitors can learn how to use the new website dedicated to Pierpont’s correspondence.

“The telegrams are incredible,” Cuthbert said. “They provide nearly a daily record of the progress of the war in western Virginia for the first two years.”

At noon, attendees can enjoy a piece of birthday cake in the Atrium and receive a complimentary copy of the colorful 2011 West Virginia Day Poster. The poster features a map of “East and West Virginia” issued 150 years ago when no one knew what lay ahead for the two states of Virginia.