Penny Pugh, Head of Reference for the Downtown Campus Library, has received national recognition for work benefiting the libraries at WVU and around the state.

LYRASIS, an organization for librarians and information professionals that serves more than 6,000 institutions, has named Pugh its Excellence Award winner for 2011 based on her dedication to libraries of all kinds and for her work with the statewide database program, as well as her enthusiasm, vision and dedication to forwarding the success of libraries.

“One of the reasons we selected Ms. Pugh is the breadth of the impact she has had and the transformational work she has done,” said Kate Nevins, LYRASIS chief executive officer. “We were able to see the positive effects she has had at WVU and statewide.” 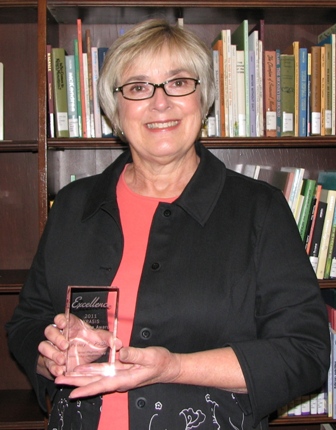 Nevins commended Pugh for staying at the forefront of library innovation, from playing a role in creating the WVU Libraries’ first website to working to ensure faculty and student access to cutting-edge eResources.

Pugh has also demonstrated leadership at the state level. Through her work with the West Virginia Library Association, she earned the respect of librarians throughout the state. Her stint as WVLA president for 2004-2005 is especially noteworthy.

Her term was marked by increased membership and outstanding fall and spring conferences. She also served as the organization’s spokesperson when interacting with the media and elected officials in Charleston. She previously served as chair of WVLA’s Academic Division and as a member of the Executive Board. She was on the committee that initiated discussions and conducted early planning for what later grew into West Virginia Info Depot, a collection of online library resources.

“Librarians throughout the state are smarter and more effective in their professional roles because of their interaction with her,” Nevins said. “These are not theoretical impacts. These are tangible results for real people serving real library users.”

Receiving an award for excellence is a bit intimidating for Pugh, who believes she was only doing her part to serve the University community and her fellow West Virginians.

“It certainly is encouraging, and it gives me a sense of satisfaction that my contributions have been noticed,” Pugh said. “I’m honored and humbled to know that I was even nominated.”

A driving force behind Pugh stepping beyond campus to serve is a strongly held belief in the value of free public libraries providing their communities with places where anyone can go to read, to think, to write, to engage in literacy and educational efforts, and to be able to check out an armload of books.

Pugh smiles as she talks about the great feeling kids get when they can take home a stack of books. She was one of those kids. A book mobile made regularly stops at her elementary school, and she selected several titles on every visit.

While it has required long hours and dedication, she enjoys the opportunities she has had to work alongside librarians from around the state and speaks enthusiastically about her love for public libraries and librarians.

“I got a lot more back than I ever gave because I learned so much and have developed so many wonderful friendships,” Pugh said. “The award is the icing on the cake.”

“I told Frances that winning the award is absolutely wonderful, but knowing that she thinks I deserve it is priceless,” Pugh said. “It means a great deal to know that you have the support of your leader.”