On September 19, 1931, residents of Harrison County, West Virginia, mobbed the county jail in Clarksburg.  The confessed murderer, Harry Powers, waited inside in his cell.  Less than a month earlier, he had admitted to the horrific murders of two women and three children on his farm outside of Clarksburg in the small community of Quiet Dell.  The mob, upset with the slow progress of the court, wanted justice and wanted it fast. Realizing violence was very likely, police slipped Powers away to the State Penitentiary in Moundsville to wait for his trial.

The scene at the jail makes headlines.

Harry Powers, a married man and proprietor of a small grocery store in the Broad Oaks section of Clarksburg, had made contacts with wealthy women through a match-making service.  Using aliases and describing himself as a civil engineer, Powers lured his eventual victims with love letters.  Widow Asta Eicher came to the area from Park Ridge, Illinois with Powers, who shortly after returned to Illinois pick up her children, Greta, Harry, and Anabel, ages 14, 12 and 9.  Another widow, Dorothy Lemke of Massachusetts, also traveled with Powers to north central West Virginia.  Both women presumed they would marry him.  Powers only wanted their money. 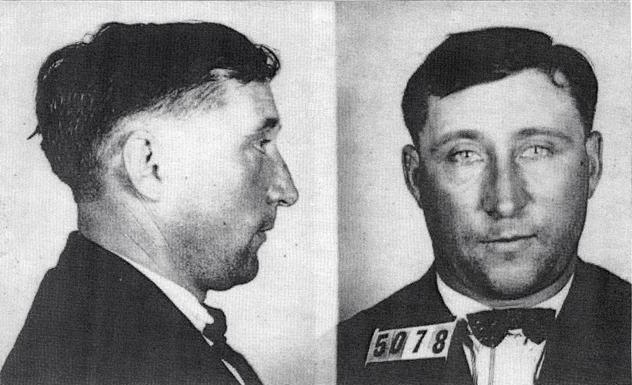 A 1920 mugshot of Powers from the Police Department of Dayton, Ohio.

Inquiries into the disappearance of the Eichers led local police to Powers – who had letters to other women in his pockets at the time of his arrest.  He eventually confessed to the murders of the family and led the police to the small garage at Quiet Dell.  After searching, the bodies of the victims were found buried in a sewage trench on the property.  They had been starved, beaten, and strangled. 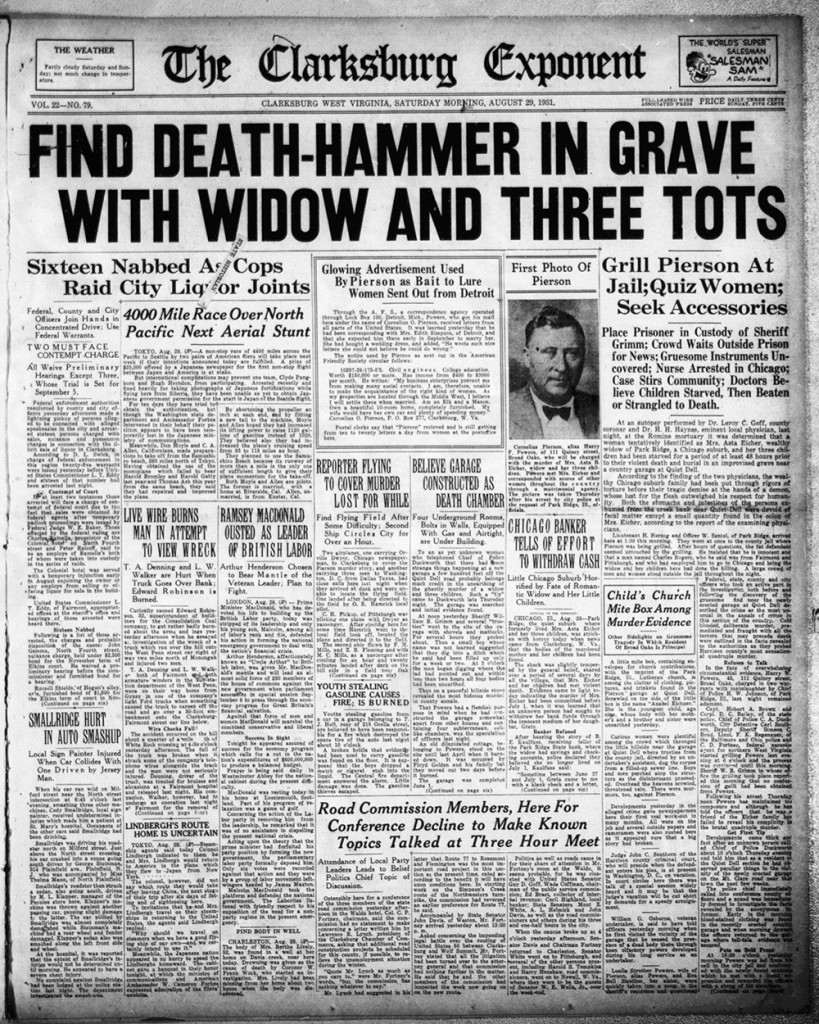 News coverage shortly after Powers’s confession.  Powers is referred to as Pierson in the articles as Cornelius Pierson is the alias he used in his communication with Mrs. Eicher.

The terrible crime shocked the local community.  The gruesome nature of the murders brought national attention to the story as well.  Media from across country traveled to Clarksburg for the trial.  The proceedings were held at Moore’s Opera House in Clarksburg to accommodate the large crowds who wanted to attend and because the new Harrison County courthouse was under construction at the time.  On December 12, 1931, Powers was found guilty and sentenced to death by hanging.  His sentence was carried out at the State Penitentiary on March 18, 1932.

The senseless murders have inspired a number of documentary and fictional works.  Perhaps the most well-known is the movie, The Night of the Hunter, based on the book of the same name by West Virginia author, Davis Grubb.  A noted writer, Grubb wrote 10 novels and a host of short stories, some of which were adapted for television by Alfred Hitchcock and Rod Serling.  Grubb was born in Clarksburg, but grew up in Moundsville.  He knew the Powers story and used it as a loose basis for the characters in The Night of the Hunter. 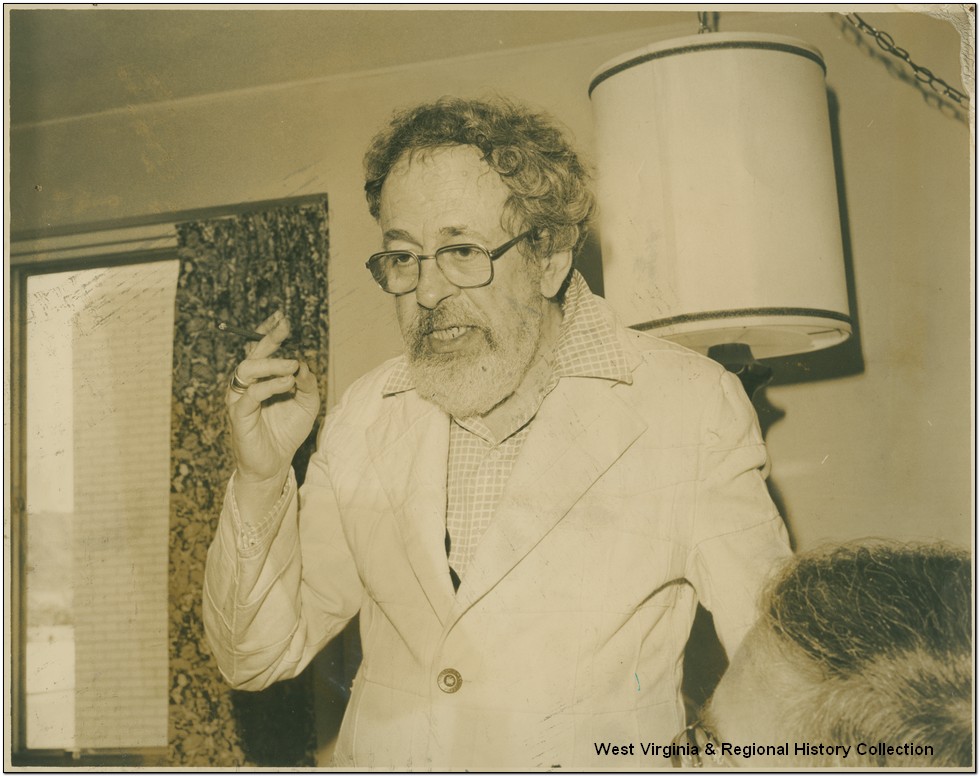 An undated photo of Davis Grubb.

The WVRHC holds original typescripts for “Gentleman Friend,” Grubb’s short story that became The Night of the Hunter, as well as a first draft with revisions of the later work.  The film, The Night of the Hunter, starred Robert Mitchum and Shelly Winters.  It was not well received when released, but has gained a cult status over time.  In recent years it has been cited in many lists of influential films and was selected for preservation by the Library of Congress. 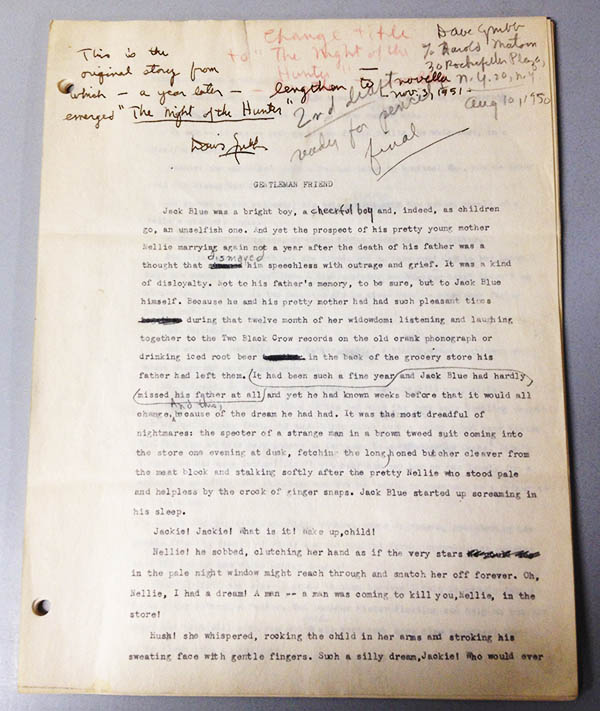 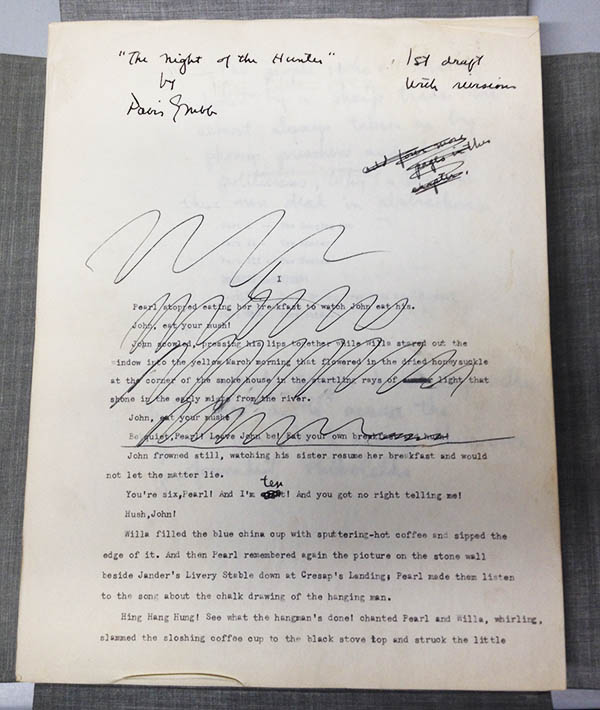 Original typescripts for “Gentleman Friend” and The Night of the Hunter. Note the hand-written comments from Grubb on both.

The WVRHC also holds books relating to the Powers murders.  Love Murders of Harry Powers: Beware Such Bluebeards was written by Powers’ former lawyer and published in 1931, the same year as the murders.  It is presented as a report of the facts of the story, but at times becomes highly sensational.  In 2013, Jayne Anne Phillips, a native of Buckhannon, West Virginia, released Quiet Dell: A Novel.  While parts of the story are fictionalized, the book relies heavily on the historical record and uses the real names of the victims and others involved in the tragic tale. The book brings the tragedy to a new generation of readers. 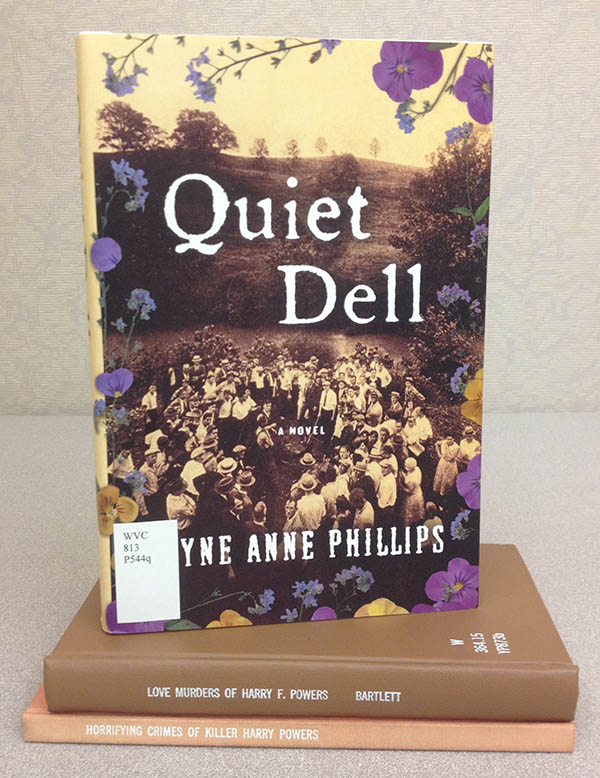 Quiet Dell and other Powers inspired books.  Powers was called a Bluebeard in reference to the folktale about a nobleman who habitually kills his wives.

“The Night of the Hunter,” http://en.wikipedia.org/wiki/The_Night_of_the_Hunter_(film)