4H Scrapbook Shares Memories of the Summer of 1925

This fall I have had the pleasure of displaying a small exhibit on the History of Extension at WVU to two events, the Smith-Lever Act Research Symposium and the WVU Extension Annual Meeting.  The exhibit contained photographs, books, and early extension bulletins, but the item that generated the most interest was a scrapbook that documents camp life at Jackson’s Mill in 1925.  The scrapbook contains fantastic images of campers at work and play at the state 4H camp in Weston, W. Va. The unique album is a part of A&M 198, the Howard M. Gore Papers.  Born in 1877, Howard Mason Gore lived in Harrison County and ran his family farm after the death of his father.  Gore earned a degree in agriculture from WVU, eventually becoming assistant secretary of agriculture during the Coolidge administration.  A Republican, Gore won the governorship of West Virginia in the 1924 election.  He briefly served as secretary of agriculture before taking office as governor in 1925.  He served one term as governor and later held several public positions before his death in 1947. 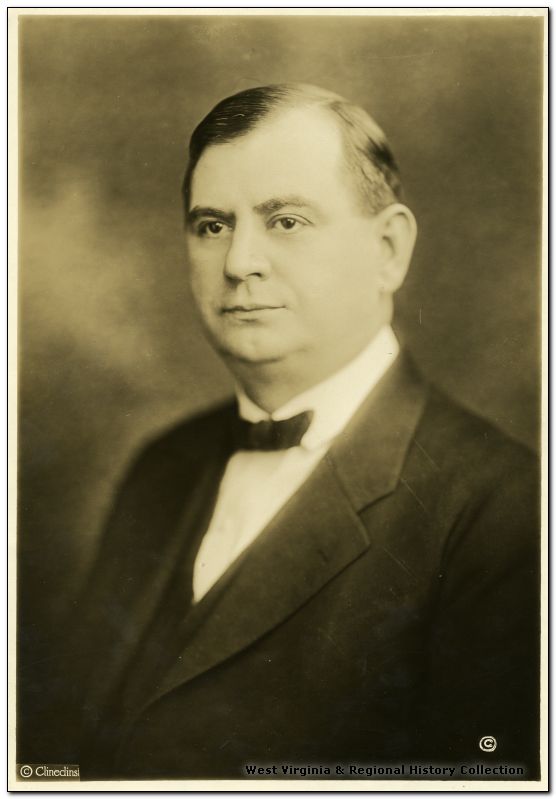 The Gore collection contains photographs, printed material, speeches, scrapbooks, and extensive correspondence.  I didn’t find any documentation on who sent the Governor the scrapbook, but the first page is inscribed:

“To His Excellency, The Governor of West Virginia:

This booklet has been prepared so that you may have an idea of the life at Jackson’s Mill this summer.  I hope that through it you may to the greatest possible extent catch the spirit of the 4H work there.

Jackson’s Mill became the official state 4H camp in 1924. The scrapbook gives an intimate look at these early camp activities and also documents the facilities at the Mill as they developed.  The scrapbook focuses on four camps held in the summer of 1925: Volunteers Conference, Home Beautification Camp, Older Boys, and Older Girls.  At the Volunteers Conference, leaders trained volunteers to become future leaders.  They also broke ground for the Monroe County Cottage during the camp. 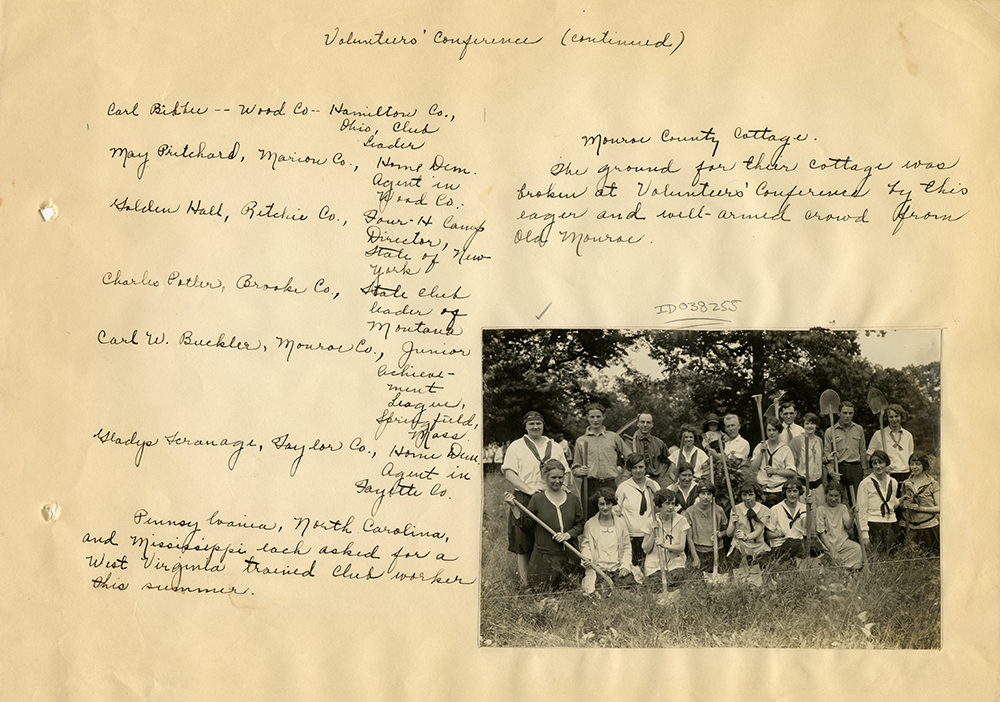 During Home Beautification Camp, campers got to go swimming in the “new pool” on the lawn in front of Mount Vernon Dining Hall.  This pool is no longer in existence. 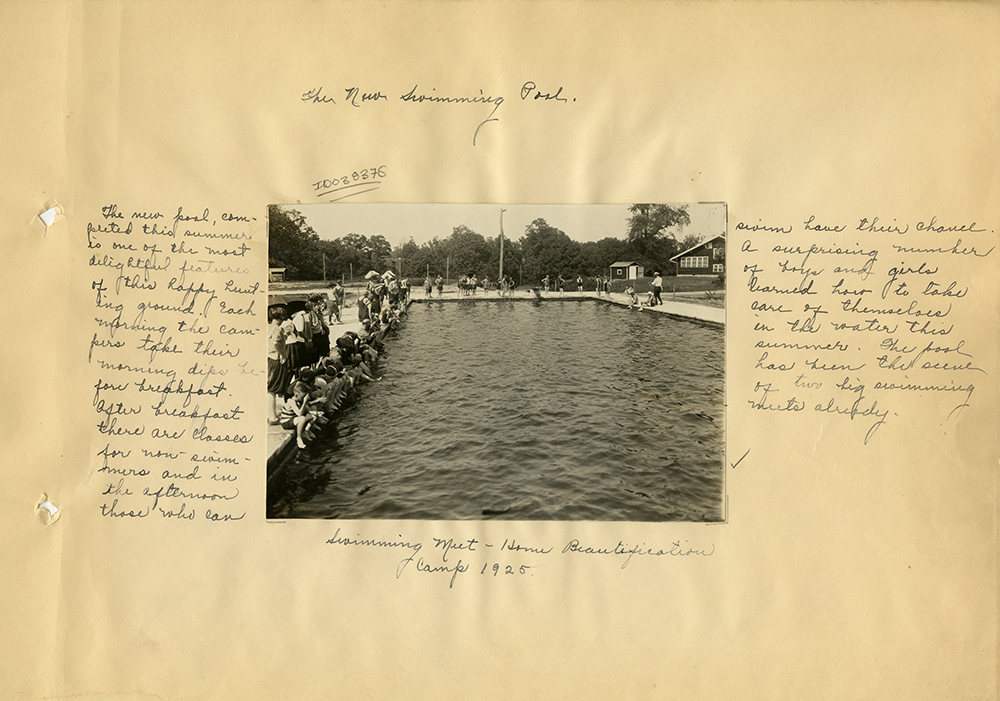 The scrapbook images show campers engaged in a variety of learning experiences.  Girls baked bread, made baskets, and hand painted furniture. They learned to weave and dye fabric, and practiced sewing with electric sewing machines.  Boys took courses on woodworking, blacksmithing, and butchering.  They built a poultry house and roadside market building and made repairs to the foundation of the Old Mill. 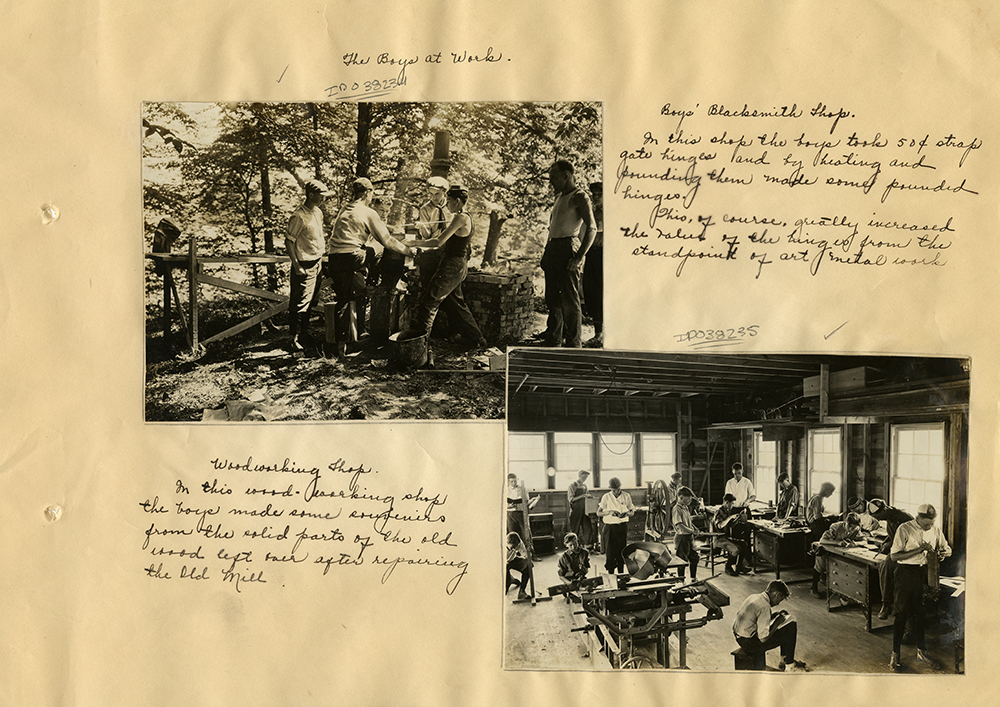 But it was not all hard work. Swimming, tennis matches, picnics, and parties helped campers to connect and have fun.  All this prompted the scrapbook writer to describe the summer of 1925 as not just good times, but “the best on earth.” 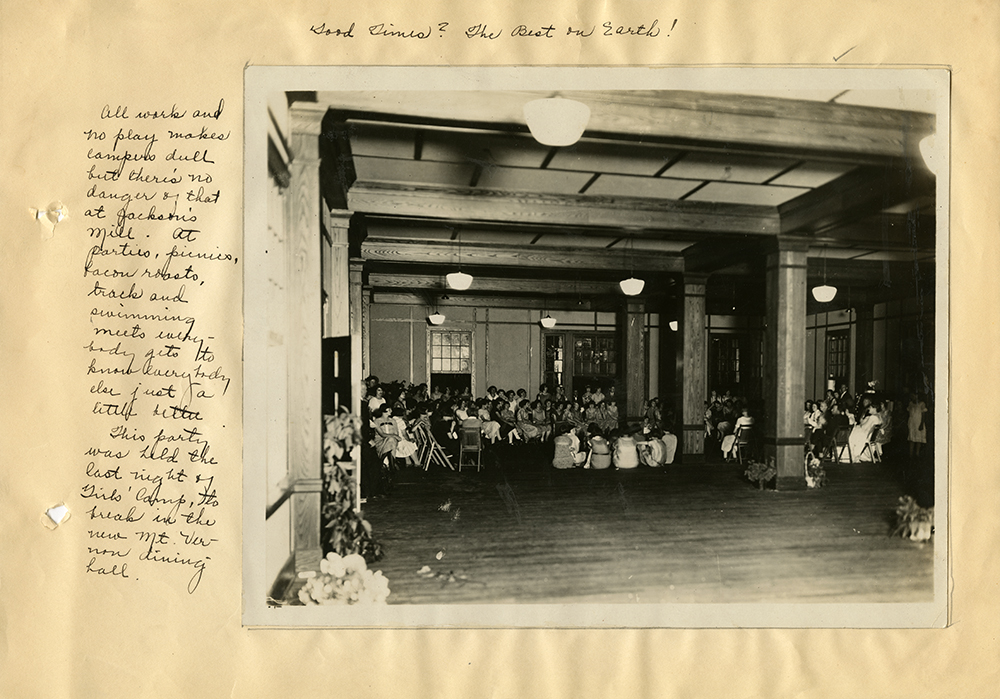 This girl’s camp party was held to break in Mount Vernon Dining Hall which was newly opened in 1925.  (Click picture for enlargement.)

The scrapbook is a wonderful artifact that illustrates the history of extension and 4H in West Virginia. The lovely imagery and handwritten captions make it easy to “catch the spirit of 4H” and get a glimpse of camp life all those years ago.  While the intended purpose was to educate a new governor, the scrapbook has now reached many more as part of the holdings of the West Virginia & Regional History Center.