Thousands of pages of newspapers at the West Virginia and Regional History Center have been digitized and are now searchable, with additional installments to be added in the future.  They’re available via the Library of Congress website “Chronicling America.”

Now that a substantial quantity of our newspapers have been digitized for Chronicling America, I wanted to test the website’s search engine — what could be discovered in one computer search that would previously have required hours of page-by-page reading of microfilm?  I chose to research a topic in popular American culture, “ragtime.”  Although the ragtime era extended from about 1895 to 1918, I could only search for the term “ragtime” in the period 1895 to 1910, the latest date of our currently digitized newspapers.

My Search Query in Chronicling America 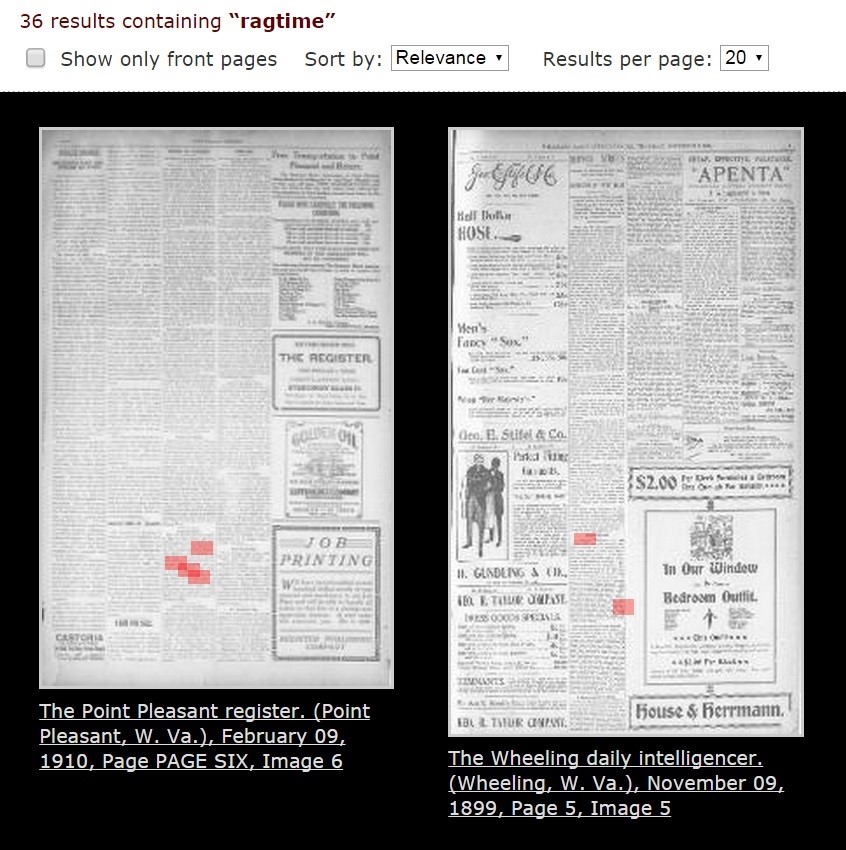 My Search Results in Chronicling America

Ragtime music caught on big in America in the late 1890s, especially after Scott Joplin’s Maple Leaf Rag sold a million copies of sheet music in 1899, thus inaugurating a new genre of popular music.  Although it began as an instrumental genre for solo piano, ragtime’s catchy syncopated rhythms and steady pulsation soon led to a transformation of popular music in general, including the vocal genre of popular song emanating from the publishers of New York’s “Tin Pan Alley,” and the dance and theater music of the era as well.

The interesting variety of search results I obtained confirms this picture, one of ragtime permeating the popular culture of the time in a multiplicity of ways.  My first example shows that, although popular, the new sounds of ragtime were shocking to some, drawing push back as evidenced in this humorous story from The Point Pleasant Register of 9 February 1910:

The men here of late have another fight on their hands, and it is with daughter’s music teacher. Men, having low tastes, like ragtime music, buy a piano and hire a teacher, that daughter, in the evening, may make them forget the day’s worries with ragtime pounded out with enthusiasm. But daughter isn’t allowed to play ragtime. Her teacher, if she is anybody at all, would not let her touch a ragtime sheet, and father has to hear music in which there is a whole lot of hand gymnastics and not a jingle. This is in accord with the plot in which all women are implicated to uplift father in spite of his screams. 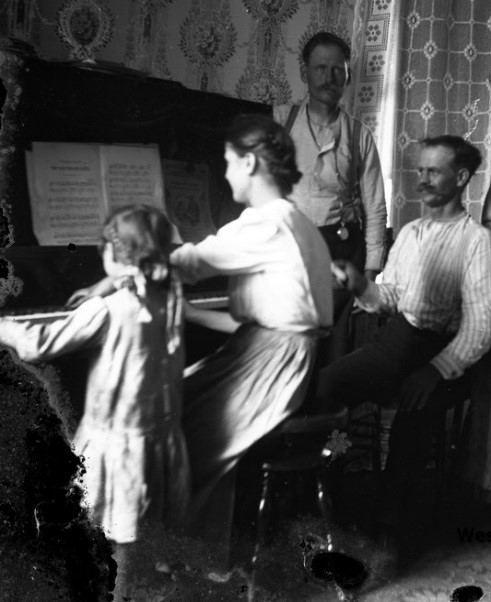 Photo by Scott Gibson, Morgantown photographer, ca. 1900-1915.
From the collection of the WVRHC.

It’s difficult to determine whether this specific news story was made up or based on fact, but the resistance it documents was real for the time.  The Library of Congress website on ragtime history, for example, quotes from the 1901 convention of the American Federation of Musicians in Denver:  “Resolutions were adopted characterizing ‘ragtime’ as ‘unmusical rot.’ Members were encouraged to make every effort to suppress and [to] discourage the playing and the publishing of such musical trash.”

In spite of such resistance, the style quickly caught on and became a part of popular culture.  In my research, for example, I found numerous references to theatrical entertainments and concerts in Wheeling, West Virginia featuring ragtime, such as this theater review that appeared in the 11 November 1899 issue of the Wheeling Daily Intelligencer:

“A Rag Time Reception” opened at the Opera House last night to a large audience and if one continuous round of applause is any criterion, the performances this afternoon and this evening will-be-packed to the doors. The show scored an emphatic and generous hit and it deserved it, for it is a clean-cut comedy, free from any vulgarity in either word or action, and is replete with witty dialogue, sparkling music, catchy songs and specialties away [sic] above the average. The individual members of the cast are all excellent and all scored hits. … Edith Kingsley in rag-time songs was a pronounced favorite, and her rendering with double notes of “Why Don’t You Get A Lady Of Your Own” was a gem and beautifully sung. … 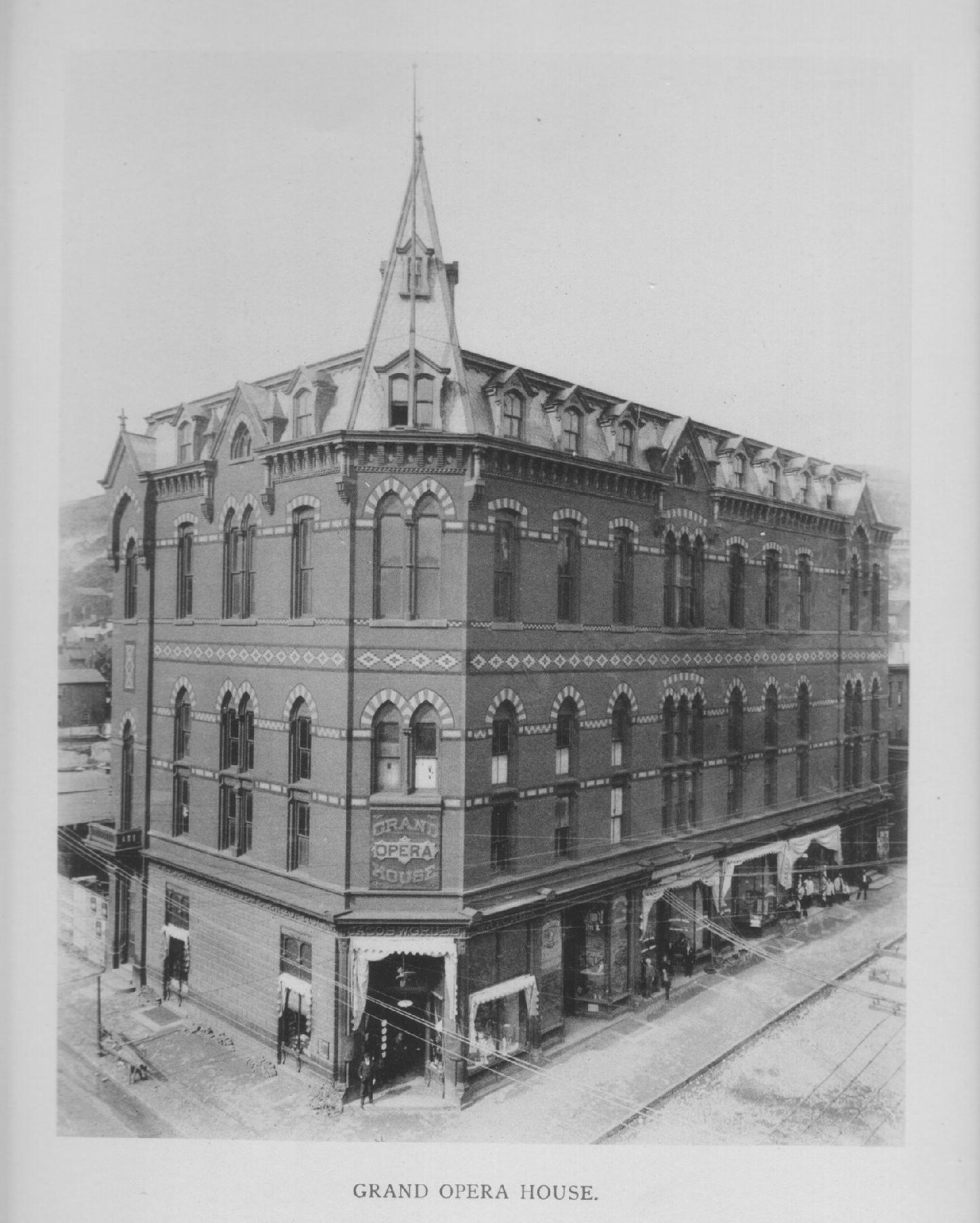 Wheeling Opera House, ca. 1889, where
“Rag Time Reception” was performed in 1899.
From the “Pictures from Wheeling Illustrated: 1889” collection of the Ohio County Public Library 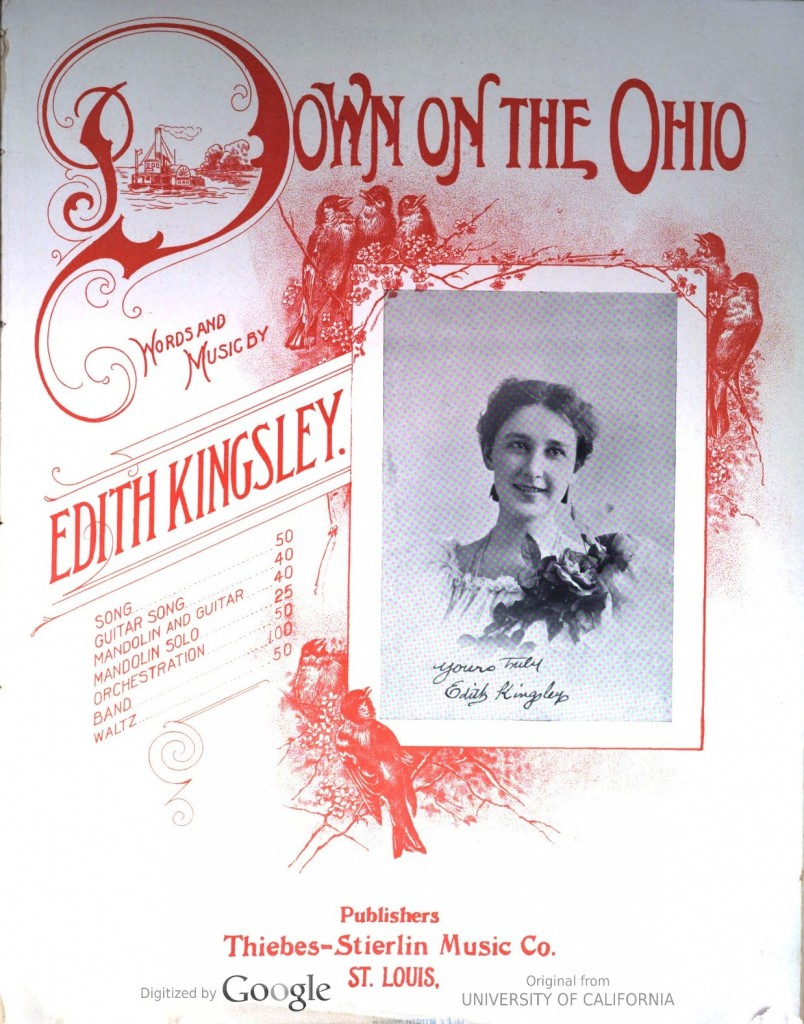 A photo of Edith Kingsley, a star of “Ragtime Reception” when performed in Wheeling in 1899, on the cover of sheet music composed by her.
Kingsley’s work as a composer isn’t unique for the era — one of the
most famous ragtime artists of the era, Elsie Janis, was a composer and author as well.

In September of the previous year, 1898, a concert was held at Wheeling Park in the “Casino,” a building serving double duty as concert and dance hall.  Again, it was the ragtime number that was the hit of the show, as reported by the Wheeling Daily Intelligencer on 1 September 1898:

THE SOMMERNACHTSFEST
Of the Opera House Orchestra Drew a
Large Audience.

A large crowd, representative of Wheeling society, attended the concert and Sommernachtsfest given by the Opera House orchestra, at Wheeling Park, last evening. Two special trains left the Sixteenth street station at 7:30 o’clock, conveying a large number of music-loving [sic] and pleasure-seekers to the casino station.  …

Of the popular music on the programme “Georgia Camp Meeting,” a rollicking, rag-time melody, made the hit of the evening.  At the conclusion of the concert, a short intermission ensued, after which dancing on the casino floor commenced.  Special motors left the casino station at 12 and 1 o’clock. 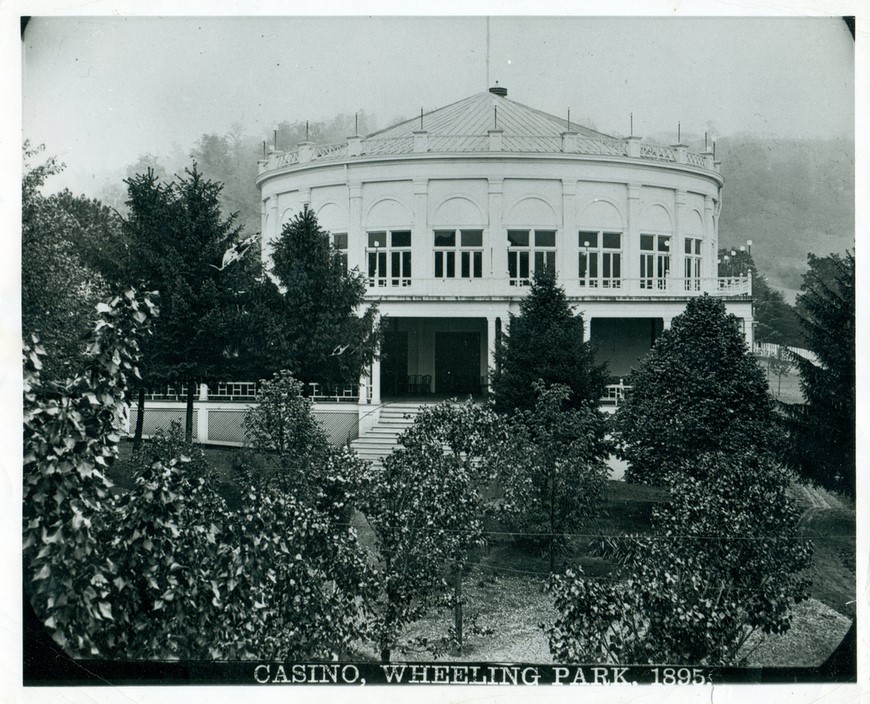 From the Flickr collection of the Ohio County Public Library

Today, we have an excellent idea of how orchestral ragtime sounded, as in the concert described above, through authentic recreations by Rick Benjamin and the Paragon Ragtime Orchestra.  They’ve even recorded the piece mentioned in the 1898 article, “Georgia Camp Meeting.”

These West Virginia newspaper stories provide some evidence of the variety of ways ragtime was known to the general public in those days, including direct evidence of both resistance to and acceptance of the music, and of its rendering in the genres of solo piano, theatrical music for voice, and concert music for instrumental ensemble.

Access to these articles was efficient, my one search yielding many hits in a moment or two, and investigation of each hit was a convenient process.  I look forward to the future growth of the database Chronicling America.

For other blog posts related to music, see

Pete Seeger, “Fifth Face on Mount Rushmore”: In Memoriam, and