This Day in History: The Liberty Bowl

50 years ago today, December 19, 1964, the WVU Mountaineers football team faced the University of Utah’s Utes in the Liberty Bowl at Convention Hall in Atlantic City, New Jersey.  Unfortunately, WVU lost that game by a wide margin.  Let’s hope our return to the AutoZone Liberty Bowl redeems us. In the meantime, we can glimpse back at the 1964 game through yearbooks, newspapers, and photographs available at the West Virginia & Regional History Center. 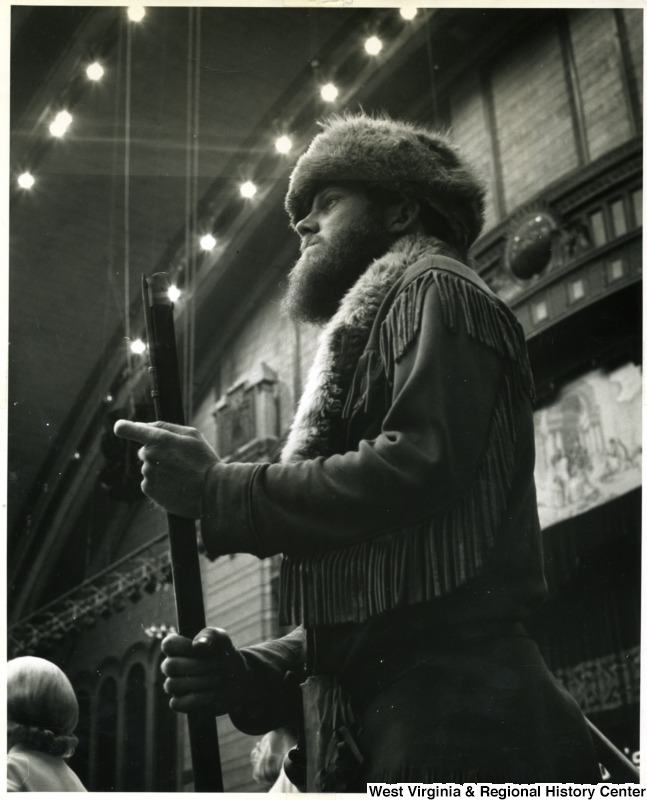 Mountaineer Mascot Ed Pritchard looks on during the 1964 Liberty Bowl.

Wally Snider detailed the travel plans of the football team as well as the marching band in his “Snider on Sports” column in the Daily Athenaeum on Tuesday, December 15, a few days before the game.  The team would leave Morgantown on a chartered bus on Thursday, December 17 and visit Convention Hall once they arrived.  They would be able to tour Atlantic City on Friday before practice that afternoon.  The WVU Marching Band would arrive in Atlantic City on Friday and have two opportunities to practice their field show in Convention Hall.  Their seven minute field show was scheduled to be televised without any commercial interruptions.  The band would also form the numbers 1964 and play during the crowning of the Liberty Bowl Queen at halftime. 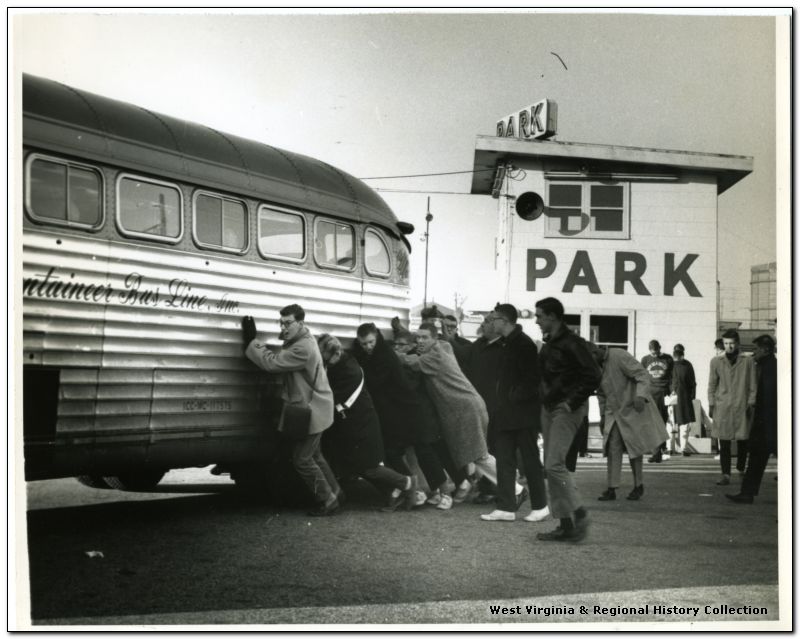 The WVU band bus needed some help in Atlantic City, so band members gave it a push.

The WVU band performing the field show.  The final number was the Beatles’ song, “Please Please Me.”

The Utes came into the game with an 8-2 record and were favored to win by five to eight points. Their quick running speed gave them an advantage.  The Daily Athenaeum advised in a headline, “Liberty Bowl Success for Mountaineers Will Hinge on Strong Defensive Effort.”  The Mountaineers basic defense for the game was the “wide – tackle six” with alternative defensive strategies “the over – shifted six and the seven diamond.”   Seniors Don Young, Jim Mazzella, and Alan Hoover had the most tackles during the 1964 season.  On the offense, quarterback Allen McCune was known for his fluttering knuckleball pass “that baffles everyone but his receivers.” Tight end Milt Clegg and fullback Dick Leftridge provided additional offensive capacity.

Convention Hall was a new venue for the Liberty Bowl.  It had been the site of the 1964 Democratic Convention a few months before.  Artificial turf did not come into use until a year later, so a four inch sod layer was placed on a regulation field a little less than a month before the game.  WVU players lamented the firmness of the field before the game saying it was hard on their feet and that cleats didn’t dig into it well.  While the indoor temperature and conditions were welcomed by Coach Gene Corum and the players, there was some concern from Milt Clegg about fielding punts with all of the indoor lights shining into his eyes.

This photo shows a game in play at Convention Hall.  It had been mistakenly identified as a scene from the 1964 Liberty Bowl, but further research revealed it to be from an earlier game, possibly between military teams.  Nonetheless, it is a nice long shot that shows the Convention Hall arena.  If you can identify the game, let us know!

ABC cameras filmed from the opposite side of the field from WVU seating, making Mountaineer fans the background for the broadcast.   Jim McKay, Paul Christman, and Curt Gowdy announced the nationally televised game.  Although the game was heavily promoted, only a little over 6000 people were in attendance. 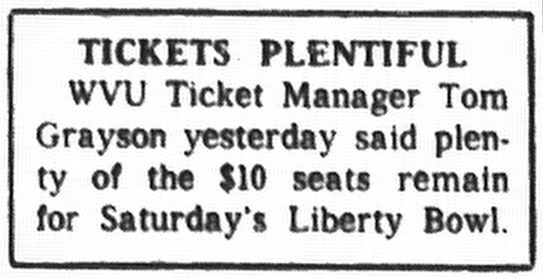 Tickets were still plentiful just days before the game.  The above announcement appeared in the December 15 Daily Athenaeum. 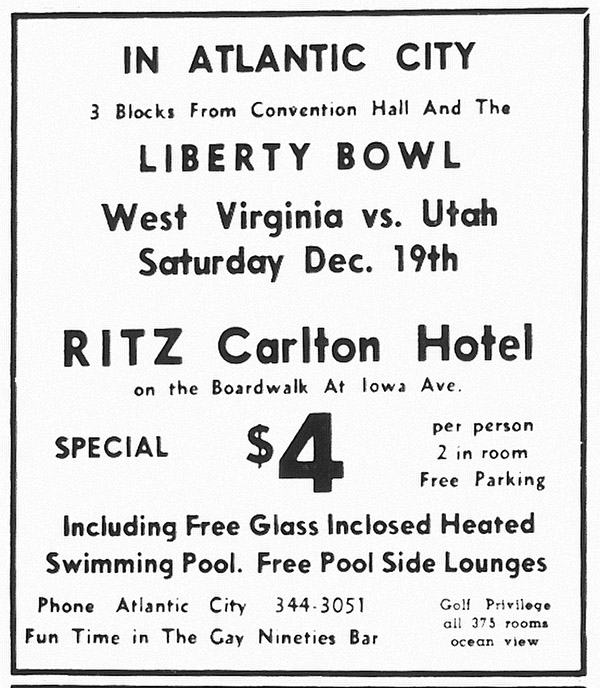 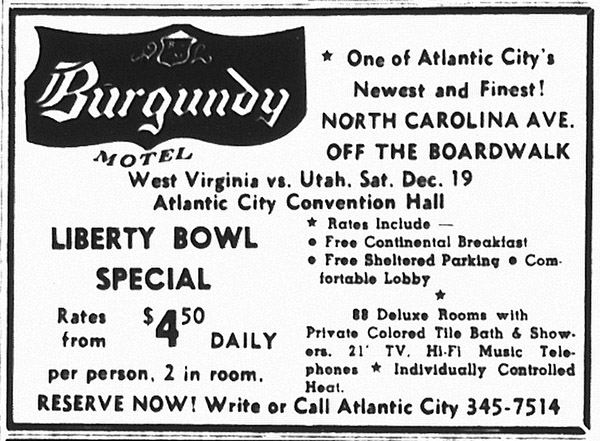 Atlantic City hotels and motels advertised in the Daily Athenaeum. A $4 room at the Ritz Carlton sounds like a good deal.

The end result was a 32-6 defeat for the Mountaineers.  Sports writers at the Morgantown Post were disappointed but not surprised by the loss.  The WVU squad was young and Utah was the better team.

Despite the crushing defeat, the Morgantown Post was optimistic for the 1965 season.

The 2014 AutoZone Liberty Bowl takes place on December 29 when the Mountaineers will take on the Texas A&M Aggies and hopefully avenge our loss half a century ago.

Posted in West Virginia Collection | Comments Off on This Day in History: The Liberty Bowl