A Mountaineer and the Sultan of Swat

Trivia Question:  What do Babe Ruth, Shoeless Joe Jackson and Powley’s Creek, WV have in common?

Jack Warhop, from Powley’s Creek near Hinton, delivered up a few home run pitches during his major league career to baseball greats such as Joe Jackson and Ty Cobb, but none as historic as the one he threw to Babe Ruth. Warhop’s Piedmont Tobacco Card, 1909-1911 series, is considered one of the most important issues in the entire hobby of baseball card collecting.

On May 6, 1915, at the Polo Grounds in New York, Boston Red Sox rookie pitcher Babe Ruth went to bat against the Yankees top hurler, submarine throwing right hander Jack Warhop (the family name was “Wauhop” but he played under the name “Warhop”).  Ruth stepped into a Warhop fastball and parked it in the right field stands. It was Ruth’s first major league home run, no. 1 of the 714 record-setting homers he would hit in his career, forever changing the game of baseball. 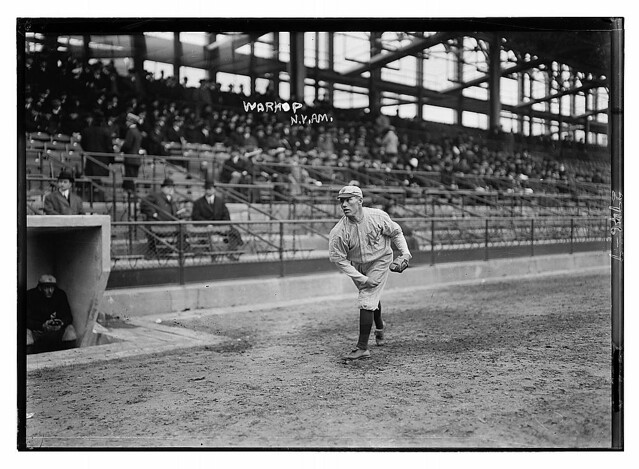 As Jack explained it years later, “In those days, the ball was dead. When you hit the ball it would sound like a croquet ball. A homer was rare and we didn’t think too much of it …it was just another game.”

Warhop’s road to the big leagues started in Hinton where he pitched on the Chesapeake & Ohio Railroad’s company baseball team in 1902. At one point he played on a “Bloomers Girls” team, which fielded both men and women players. When a Native American club came to Hinton, Warhop joined the team, toured with them and was subsequently dubbed with the name “Chief” by other ball players. He moved on to other minor league clubs and in 1908 the New York Highlanders of the American League (later renamed the Yankees) signed Warhop. He lost no time in earning a spot in their pitching rotation where he remained through 1915. During Warhop’s eight years in the majors, he accumulated an unimpressive record of 69 wins and 93 losses but had a respectable 3.12 ERA (earned run average). This placed him 445th on the all-time ERA list.

After leaving the “show”, Warhop played several more years in the minors. The last time he took the mound, Jack pitched two complete games, winning both ends of a double header. The nightcap was a 10 inning, six hitter, final score, 1 – 0. Warhop had just turned 43 and had not one performance enhancing drug in him. In April, 2000, his hometown of Hinton honored the legend of Jack Warhop by raising this historic marker at the Bellepoint Little League Park, documenting Jack’s place in the history of our national pastime.

And by the way “. . . just another game” happen again. On June 2, 1915, almost a month after Babe Ruth’s first home run, the “Sultan of Swat” hit his second major league career home run off of Jack Warhop.

All biographical information, statistics, and photographs used in this blog can be found in the Southeastern West Virginia Historical Records, A&M 3762 at the WVHRC.