Finding Money in the Archives

It’s no secret that archivists love to find stashes of great things, the hidden and often unexpected gems of a collection, like a letter from a famous person mixed in with other correspondence, a broadside advertising a concert by a musician who was famous 100 years ago, an account of a famous battle written into a soldier’s journal, or hair from the tail of T.J. “Stonewall” Jackson’s horse (yes, we actually have that).  You can imagine my excitement when I opened a wooden lap desk to find a trove of letters, report cards, and money.  As I gently separated the colorful paper currency, you can imagine my disappointment when I saw the paper currency marked 25 cents and thought that the money I found was fake. 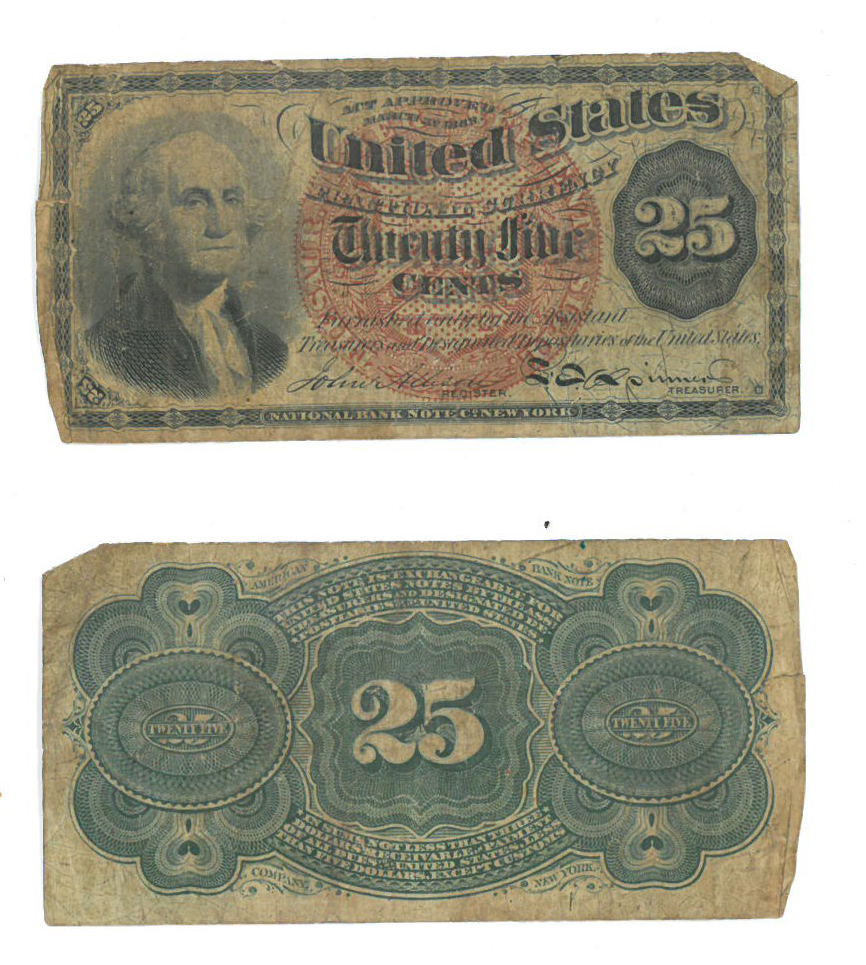 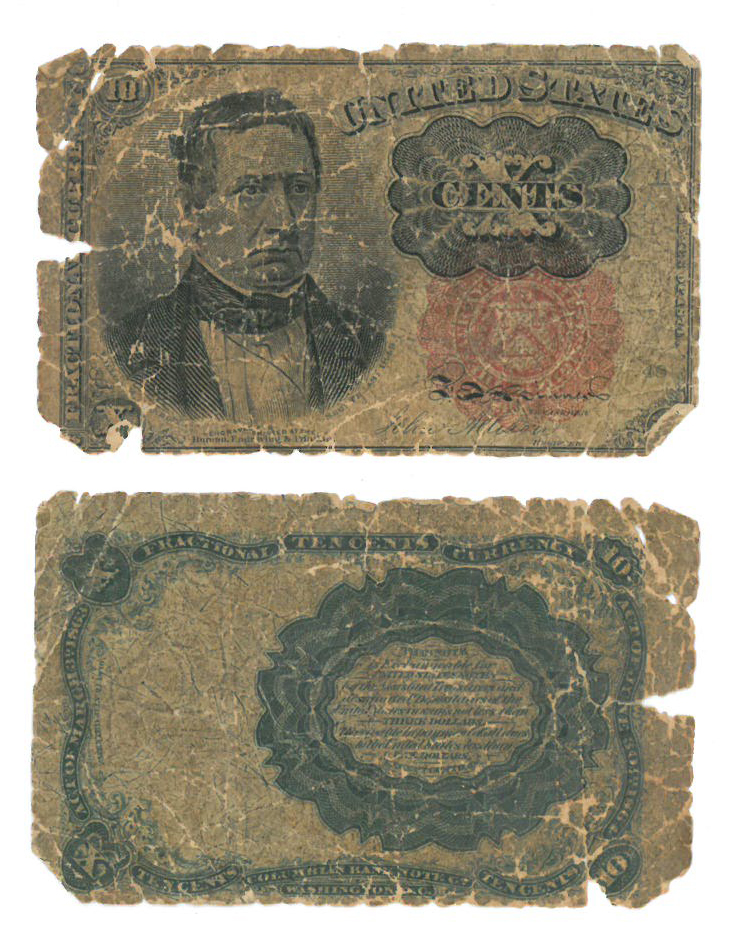 Luckily, I was wrong (mostly).  According to Wikipedia, fractional currency was issued by the US government after the Civil War, in part due to hoarding of gold and silver coins—people were really struggling with making change because there were so few coins in circulation.  The story of how the government arrived at the fractional currency solution to try to deal with the coin shortage and combat counterfeiting is pretty interesting, and it resulted in beautiful notes like the ones you see above.  In 1876, Congress authorize the minting of coins to buy back the last of the fractional currency.  Obviously, some of these still linger in private hands.

$1 note from the Sandy River National Bank of Farmington in Maine (damaged, undated)

I also found what looks like a national bank note, or a piece of paper money issued by a bank that was chartered by the U.S. government.  However, I am not entirely convinced that this note is genuine, since the back is blank, which seems unusual for national bank notes.  I’m getting a book through interlibrary loan that might help me with this, so I’ll update the blog post if I come across any new information.

Update (5/23/16): It looks like this bank note may be real after all!  I checked out Standard Catalog of United States Obsolete Bank Notes, 1782-1866, thanks to our Interlibrary Loan department (for finding it) and the Oklahoma Department of Libraries (for lending it).  The book has a record of the bank notes of Sandy River Bank (1853-1865), which later became the Sandy River National Bank of Farmington (the book actually lists the city as Farmingham, which I think is a typo, since all the bills pictured in the book show “Farmington” and Google acts like Farmingham, Maine is not a real place).  Only one $1 note is listed, on page 595 for the curious. It was printed in the 1850s and its description matches the appearance of the note in our collection–the center image shows women at looms, the left image shows a woman holding a tablet and pencil, and there is an eagle at the bottom between the signatures.  Apparently, the piece that is ripped off would have an oval portrait of Webster (probably Daniel Webster).  The book also says that “most notes produced in the U.S. obsolete period have plain, unprinted backs” (page XV) which answers my initial suspicions.  It is also interesting to note that the book has marked this particular bill as SENC, or Surviving Examples Not Confirmed, meaning that they didn’t have any known specimens when the book was made…in 1988.  Now that I’ve found this resource, I want to check every piece of paper money in our collections!  If only I had the time. 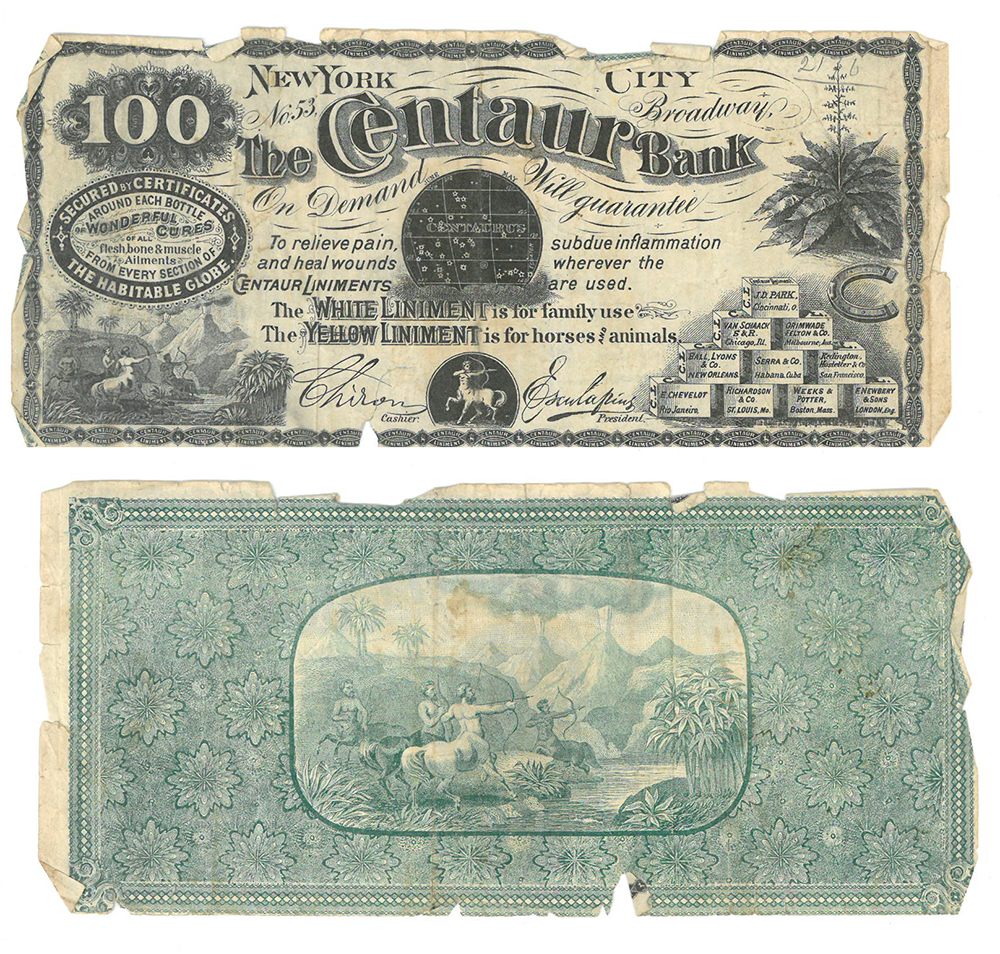 Sadly, one piece of the money actually is fake, but not counterfeit.  The image above shows an advertisement for Centaur Liniments—it feels like real money but it isn’t! How nice, though, that they make a separate liniment for humans.

If you’d like to take a look at these items, they are in A&M 4151, the Thompson Family of Canaan Valley’s Business and Family Papers—the finding aid should be available online in about two weeks.  Budding numismatists may also be interested in A&M 32, Confederate Money, and A&M 2096, the Currency Collection. For even more, check out the National Numismatic Collection of the Smithsonian Institution.

Also, the book I looked at to review the Maine bank note is also worth checking out.  Here is the citation:

One Response to 'Finding Money in the Archives'