Records were recently discovered at the West Virginia and Regional History Center that document one of the prominent pioneers of western Virginia in the 18th century, William Haymond (1740-1821).  Since the threads of so many significant historical events pass through the episodes of his life, his story merits attention.

He was born in Frederick County, Maryland.  His first encounter with history occurred in 1755 with his participation in the French and Indian War when, at the age of fifteen, he joined the Braddock expedition.  On General Braddock’s staff, incidentally, was a young George Washington serving as a senior officer in the colonial militia.  Although the expedition aimed to capture Fort Duquesne, it met with disaster at the Battle of the Monongahela on July 9th.  Haymond survived, as did Washington, but General Braddock did not.  He later joined the Forbes Expedition of 1758, which finally dislodged the French from Fort Duquesne and the Ohio River region.  He then served as a member of the Virginia Regiment from 1759-1762, a unit that George Washington had trained and commanded from 1754-1758.  The Regiment garrisoned territory captured from the French, among other duties, and was finally discharged in 1762.

Haymond moved from Maryland to Morgantown in 1773, and when Monongalia County was formed in 1776, he served in various capacities such as justice of the peace and deputy surveyor.  When the American Revolution broke out he joined the American side, and was appointed a militia captain in 1777 to command troops at Prickett’s Fort.  He was later promoted to Major in 1781 for his service during the French and Indian War.

After the Revolution, Haymond moved to Harrison County in 1784, the year of the county’s founding, at which time he was appointed the county’s principal surveyor, a position he served in for years.  This appointment followed an examination he undertook at William and Mary College.  Haymond continued to live in the Clarksburg area, working as a surveyor, and passed away on 12 November 1821.

In 1822 the government of Harrison County appraised the estate of William Haymond, and documented the sale or assignment of Haymond’s property for his widow, Mary Haymond.  These records exist at the West Virginia and Regional History Center. 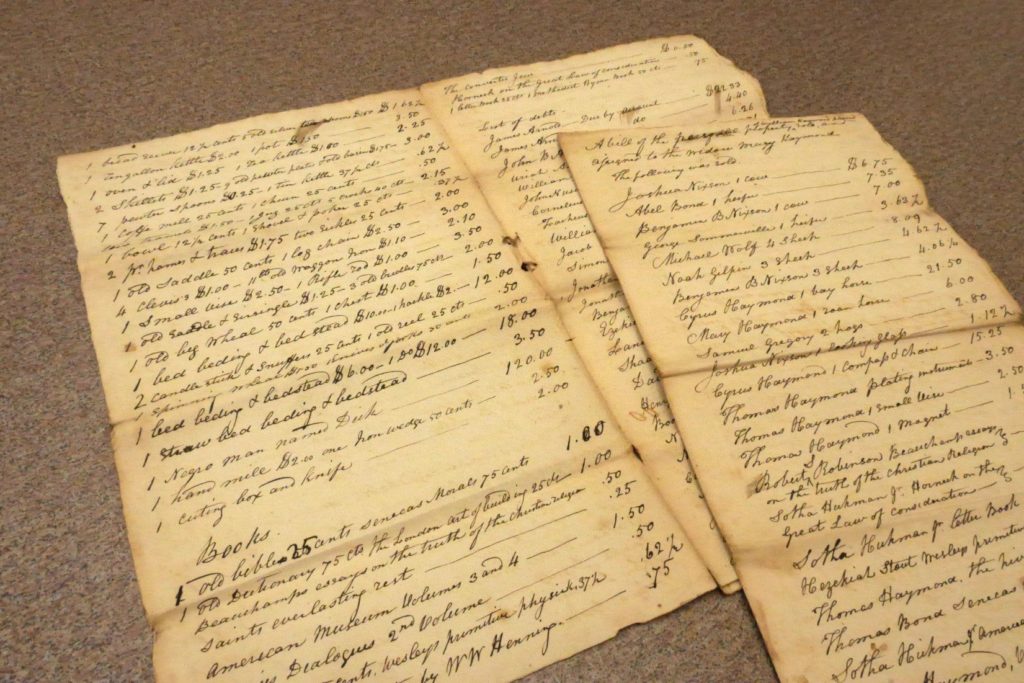 Appraisal Records for the Estate of William Haymond, 9 March 1822.

As one would expect, there is evidence of his life story to be found, such as the listing of a “compass and chain,” the tools he would have used in his survey work in Monongalia County in the 1770s, or in Harrison County in the 1780s and later.

Detail of Appraisal of William Haymond Estate, including
“Compass and Chain,” 9 March 1822.

There is also evidence of his work in county government in the State of Virginia, as documented by the listing of the book Virginia Justice by William Hening, a volume that describes the duties of and legal framework for a justice of the peace.

Detail of Appraisal of William Haymond Estate showing list of books,
including the title “Virginia Justice,” among others, 9 March 1822. 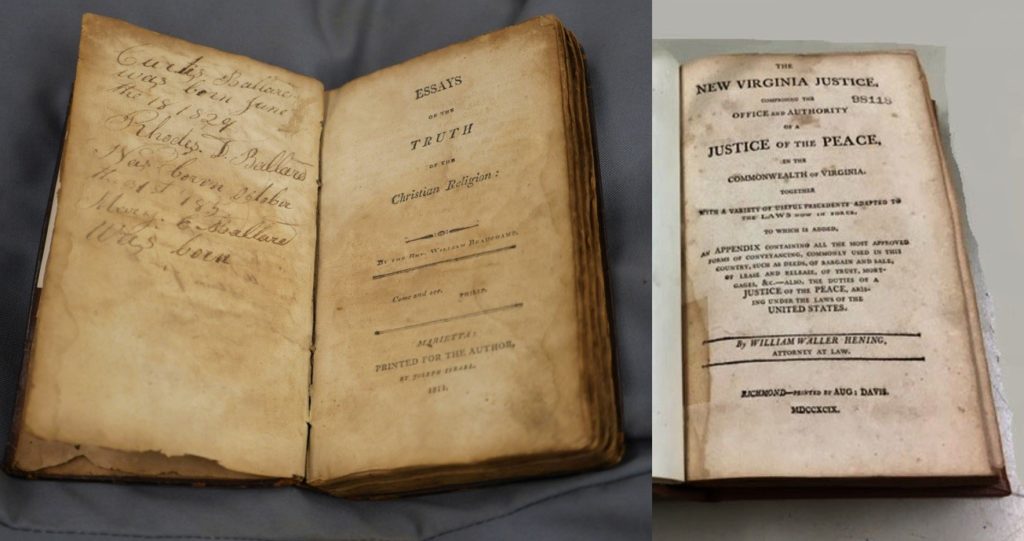 Pictured above are exemplars of two of the books that are listed on the Haymond estate appraisal as they would have appeared to the original owner, including Essays on the Truth of the Christian Religion, published in Marietta, Ohio in 1811, and The New Virginia Justice, published in Richmond, Virginia in 1799.  These rare volumes are from the collections of the West Virginia and Regional History Center and the Law Library respectively.

There are other leads to follow in the Haymond estate appraisal, but they’re beyond the modest scope of this blog.

Working with historical records can be rewarding in different ways, especially when tangible connections are made to pioneers that have had some influence in shaping the times we live in today, as is the case with William Haymond of western Virginia.

For other blogs in this series related to the Harrison County court records, see: