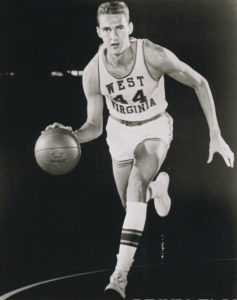 This year’s West Virginia Day celebration will include a homecoming for revered basketball legend, “Mr. Clutch” Jerry West, who will dedicate the Jerry West Collection to the West Virginia & Regional History Center, part of WVU Libraries, beginning at 9 a.m. Monday, June 20 in the Wise Library Atrium.

Members of the public are invited to attend the day’s events, in addition to West’s book signing the evening prior (June 19) at the WVU Visitors Center from 5 to 6 p.m.

In addition to the dedication, the celebration will include refreshments, a West Virginia Day forum and the opening of the Jerry West Exhibit, which will include an array of artifacts from Jerry’s personal collection, including his NBA championship ring, trophies and uniforms. Special guests scheduled to attend the dedication include Willie Akers, President Gordon Gee, Dean of Libraries Jon Cawthorne, Senator Joe Manchin and Rod Thorn.

A Jerry West website will also be launched, which includes clips from oral history interviews with his fellow NBA peers through the years, including Michael Jordan and Shaquille O’Neal.

For West, a 1960 WVU graduate and three-year member of the WVU Men’s Basketball Team, bringing his collection back home to the state and institution that built the foundation for his storied NBA career with the Los Angeles Lakers is his way of showing his gratitude for the many gifts his alma mater afforded him.

“I have led a life that I could have only imagined, the foundation of which was growing up in West Virginia,” West said. “The kindness and humility that was instilled in me has been such an important factor in the successes I’ve had in my life. It seems only fitting that West Virginia Day will give me the chance to say hello to many life long friends and to have the honor of having the Jerry West Collection housed in the Wise Library on the WVU campus.

“I am personally grateful to WVU and am deeply humbled to be back in Morgantown and to share the process of my journey.”

Cawthorne says the significance of the collection will allow WVU students, fans, media and state residents alike to gain insight into the story of the state’s legendary athletic hero.

“Jerry West will forever be among the great West Virginians, and we are honored to be the caretakers of an archive of letters, photographs, recordings and artifacts that chronicle his life,” Cawthorne said. “The Jerry West Collection will be a tremendous resources for researchers. I imagine we will see sports reporters writing about the legends of the game, graduate students seeking insight into reaching peak athletic performance, and Mountaineer fans and basketball enthusiasts wanting to learn more about their hero.”

West is a native of Chelyan and earned his bachelor’s degree in physical education. He had a 14-year career with the Los Angeles Lakers, where he amassed 25,192 points and still holds the title of as the Lakers’ all-time scoring leader. Additionally, he served as the co-capital of the gold medal winning U.S. Olympic basketball team in Rome in 1960. He transitioned from the court to the sidelines in 1974 and went on to serve as the Lakers’ head coach and general manager following his retirement as a player.