During colonial times, agricultural products were stored and transported in heavy wooden barrels or boxes. By the mid-1850s, cotton bags became the preferred method of transporting flour, sugar, seed, animal feed, and fertilizer. Especially in rural communities, these bags, commonly known as feed sacks, were reused to make clothing, curtains, sheets, towels, quilts and more. (To see a fantastic example of a feed sack dress, take a look at this dress made for the 1959 Cotton Bag Sewing Contest, preserved by the National Museum of American History.) Company logos printed on the bags with water soluble inks could be removed by soaking the bags in a combination of lye, soap, and bleaching agents. By the end of the 1950s, almost all of the products previously packaged in cotton bags were sold in paper or plastic sacks which were cheaper to produce and considered more sanitary.

The S. George Company in Wellsburg, West Virginia printed company logos on paper flour barrel labels and paper flour sacks by using metal and wood engravings.  Amazingly, many of these engravings survive today and are preserved in the GramLee Collection, curated at WVU’s College of Creative Arts.  Some S. George Company flour sack proofs made for West Virginia mills and businesses are now in the WVRHC’s A&M 3868. 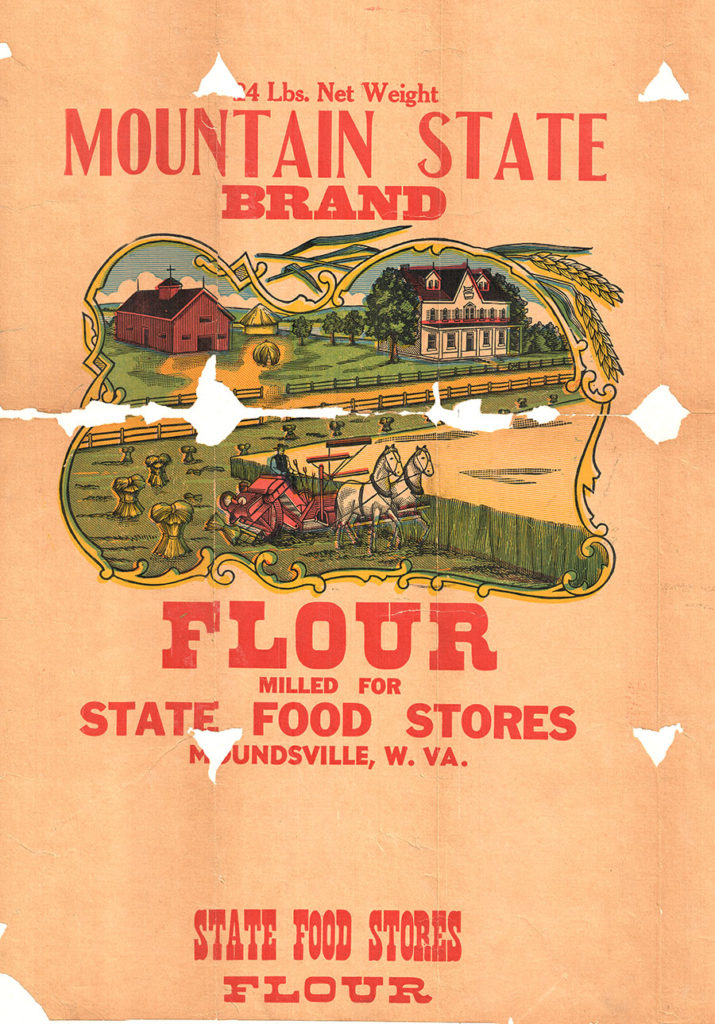 The S. George Company was incorporated in 1892, when Samuel George (1827-1903) bought his partner’s interests in their paper manufacturing business and made himself the company’s president.  The company plant, which was located in Wellsburg, WV, near the Ohio River, manufactured flour barrel labels and all kinds of paper sacks.  Interestingly, Mr. George transitioned from a farming background to become a man of business and finance, and in 1900 was elected to serve in the WV State Senate for two terms. George actually began his work in paper manufacture in 1878.  Even before the paper business was his alone, he was well-known as one of its proprietors and well-respected as a benefactor and leading citizen of Wellsburg.  “There has never been anything projected or undertaken that had a tendency to entrance Wellsburg’s interests that Mr. George was not among the first to take hold, and it has always been the case that when he exerted a helping hand the work was successful.”  This glowing praise is from The Wheeling Daily Intelligencer, September 14, 1886 (Special Natural Gas edition), as cited here: http://www.ohiocountylibrary.org/wheeling-history/wellsburgwv-1886/3044.

His son, Samuel George Jr. (1868-1931), managed the paper mill (among other things) beginning in 1890.  After his father’s death, he continued on as a director and officer of the S. George Company.  Samuel Jr.’s younger brother, Thomas H. George (1872-1929), served as treasurer and general manager of the paper company as well.

The company operated both a paper mill and a paper sack factory.  The S. George Company records from ca. 1900-1975 (which are held in the West Virginia & Regional History Center as A&M 2799) include a 1936 price list for several types and sizes of paper sacks produced by the company. 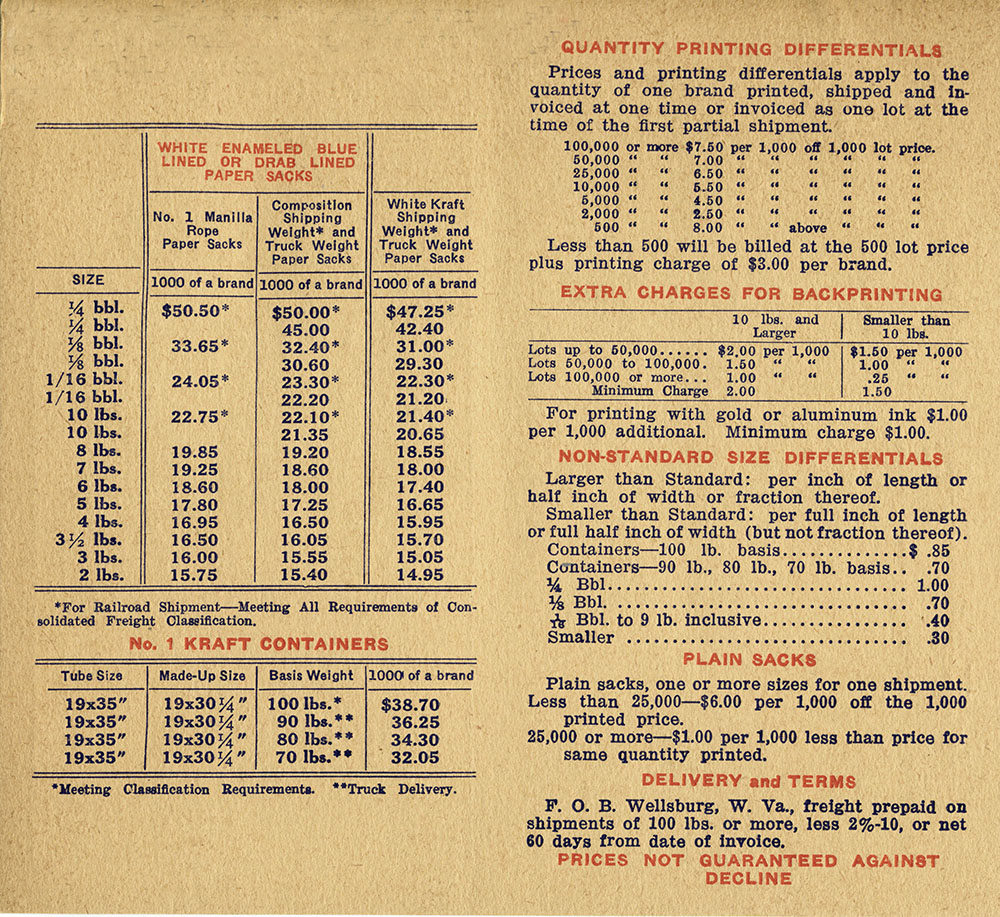 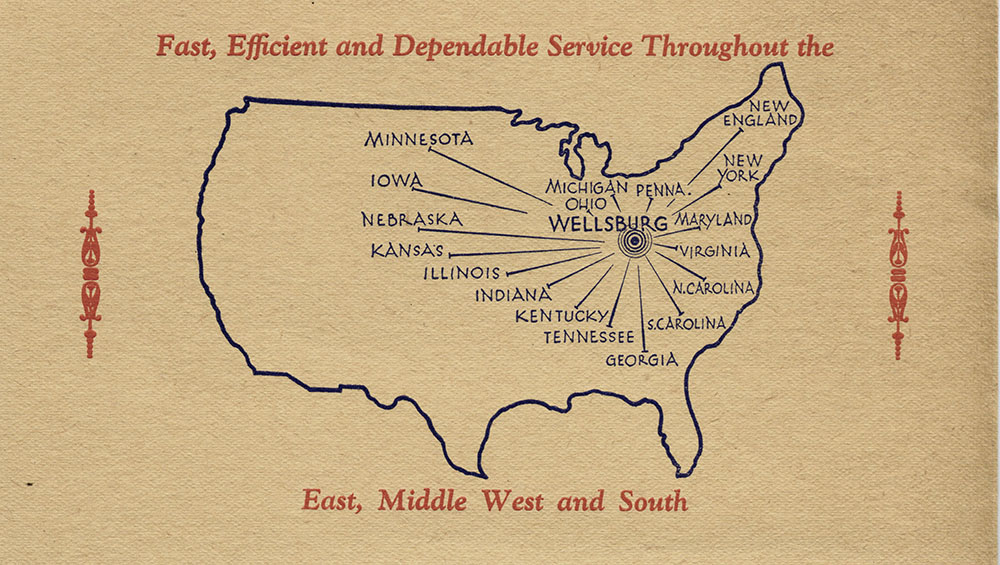 As you can see from the map above, this West Virginia company served a very large area of the US with paper sack products.  Work for one of their Michigan customers is represented below.  We have 5 other flour sacks printed for the Voigt Milling Co. in Grand Rapids in A&M 4206, the S. George Company Flour Sack Collection. 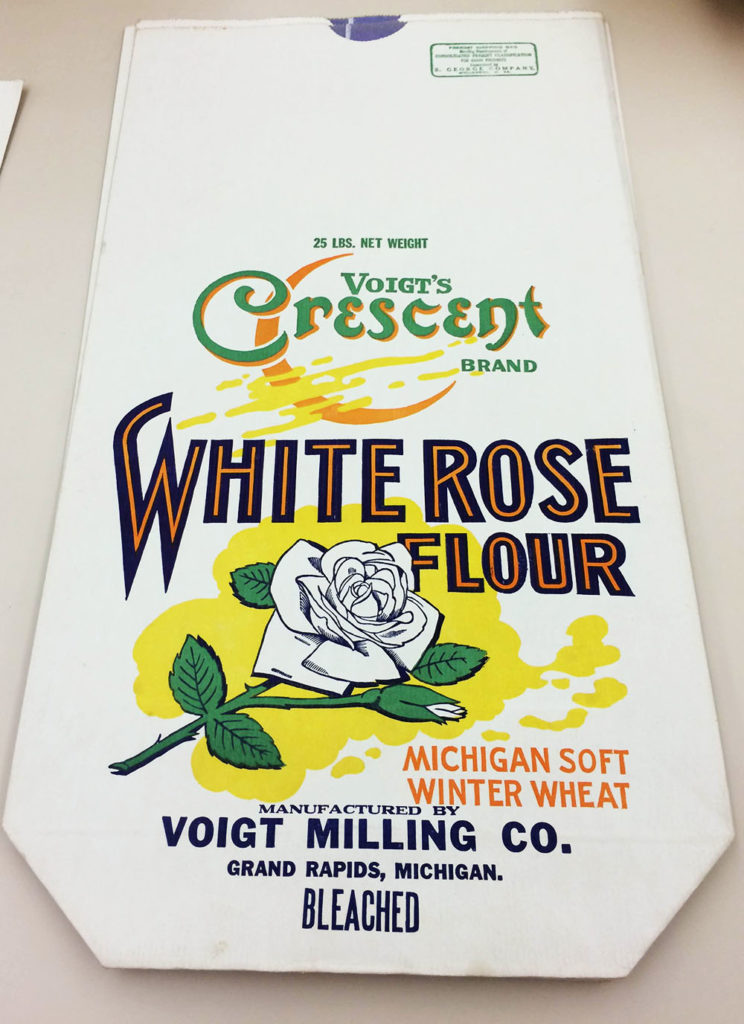 The S. George Company name is stamped at the top right corner of the sack. 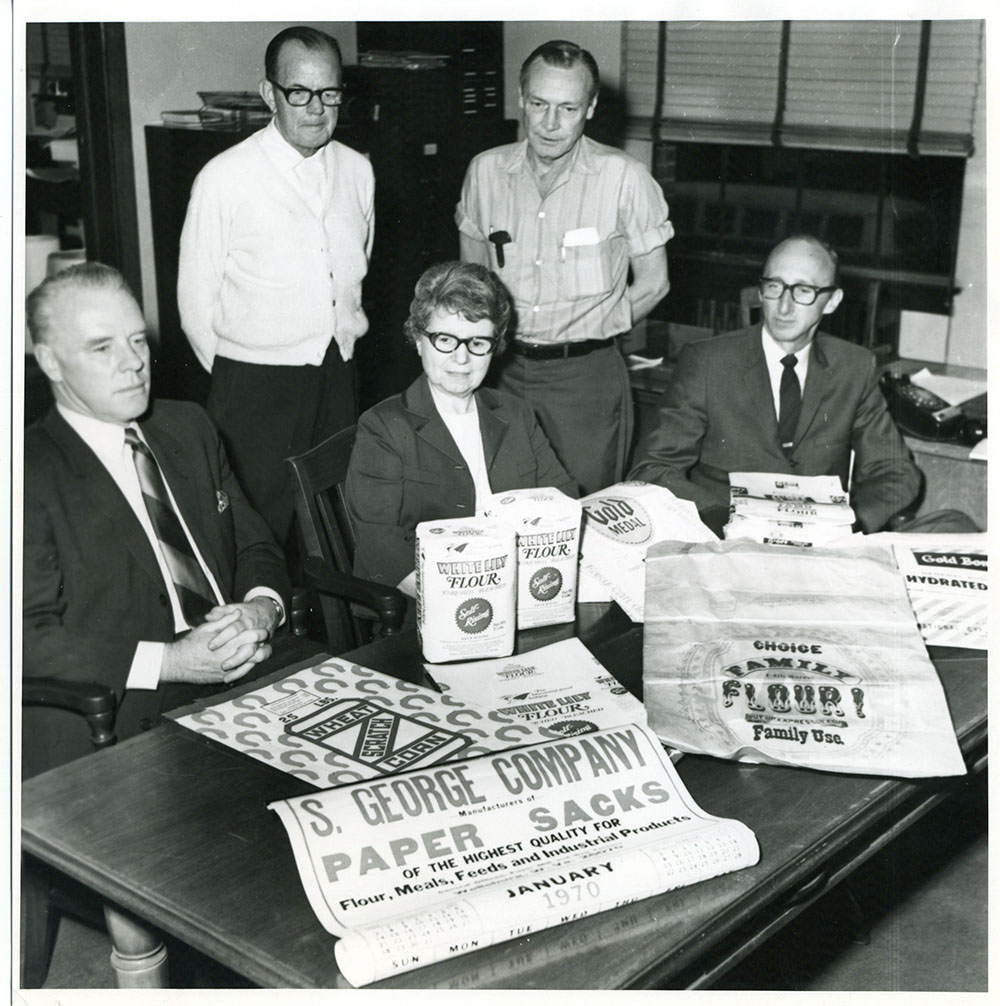 S. George Company employees with paper sack products, 1970 (from A&M 2799). (Katherine) Jane Watson is the woman in the center of the photograph.

Additional Sources of Information about the Georges:

6 Responses to 'Preserving the History of West Virginia Flour Sacks'