Looking at Appalachia is a juried collection of images by amateur and professional photographers directed by West Virginia native Roger May. It chronicles life in the 13-state region more than 50 years after President Lyndon Johnson’s War on Poverty. The pictures line three walls on the Library’s first floor. 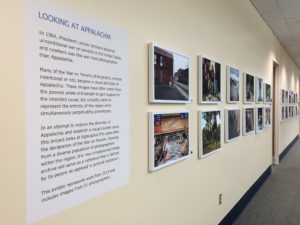 Looking at Appalachia provides a glimpse into the 13-state region, photo by Alyssa Wright.

Hollow is an award-winning web-based interactive documentary created by WVU alumna and state native Elaine McMillion Sheldon. It examines the issues facing McDowell County residents and the reasons behind the massive exodus from the area over several decades. Hollow won a Peabody award in 2013 and was nominated for an Emmy in 2014. An exhibit in the Downtown Campus Library Atrium showcases the participatory project. 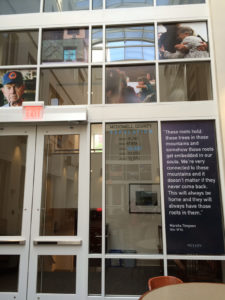 Images from the documentary Hollow adorn a wall in the Downtown Campus Library Atrium, photo by Alyssa Wright.

“The Libraries see art as a tremendous tool to inspire people to see the world from a different perspective and question long-held beliefs,” said Alyssa Wright, chair of the Art in the Libraries Committee. “This event offers a great opportunity to learn more about the life and concerns of our fellow Appalachians.”

The reception begins at 1 p.m. in the Milano Reading Room in the Charles C. Wise Library with music by WVU Bluegrass Band alumni Hillary Kay (vocals), Judith Myers (Fiddle) and John Posey (guitar). Heavy appetizers and local beer and wine will be served. At 1:30 p.m., May and Tricia Fulks Kelley, associate producer of Hollow, will speak and take questions.

The event is open to the public. For more information, contact Wright at 304.293.0337 or alyssa.wright@mail.wvu.edu.