This year, 2016, marks the 50th anniversary of the iconic science fiction TV show, Star Trek, which debuted in 1966.  Today, following an unprecedented series of spin offs, the first Star Trek is referred to as TOS or The Original Series.  To celebrate Star Trek’s 50th anniversary I would like to share with you a new acquisition to the Rare Book Room in the West Virginia and Regional History Center, a miniature book titled Star Trek: A Television Series, 1966-69. 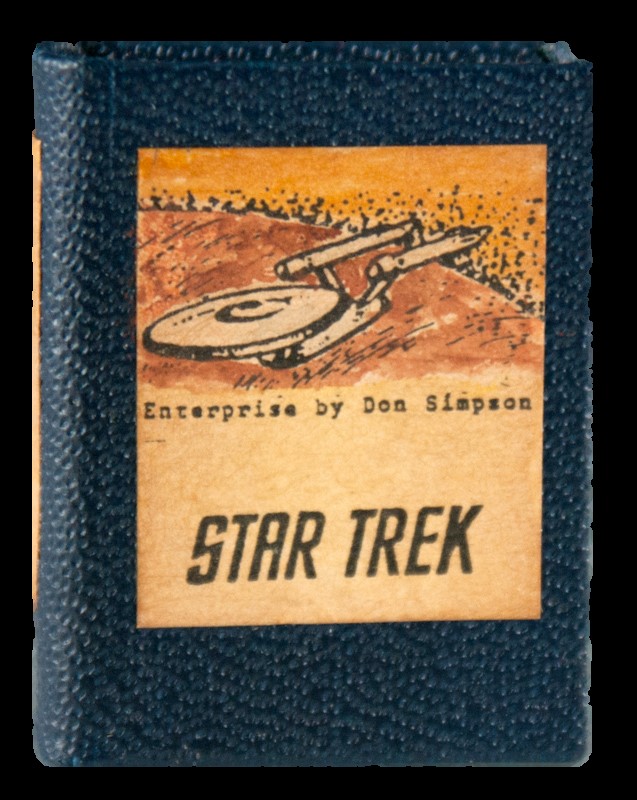 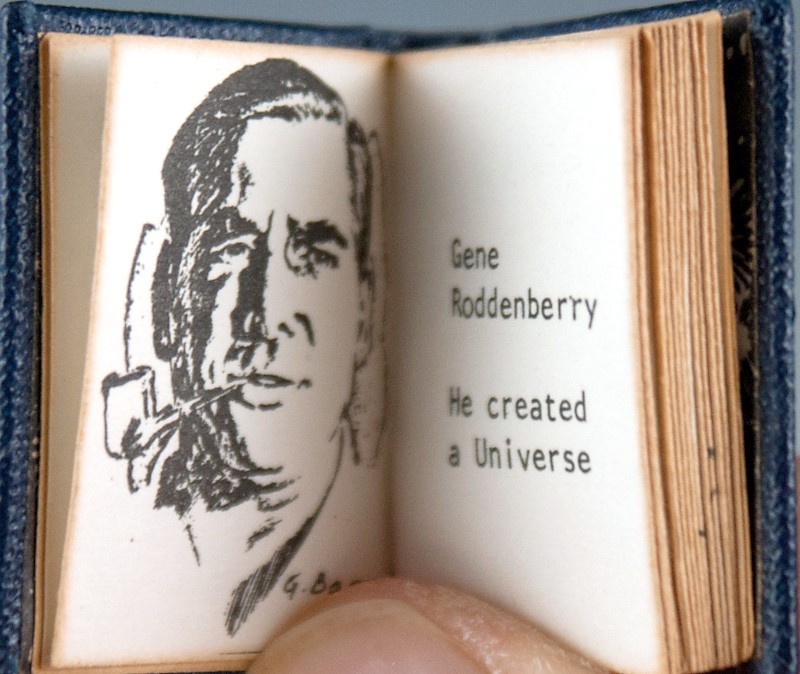 This new acquisition is a miniature book measuring only 1/4 by 5/8 in. or 30 x 24 mm! Truly a rarity, this tiny tome is one of only 300 copies, and signed by Yolanda Carter, the publisher and binder of Amistad Press. This miniature may be small but it’s packed with portraits including twelve black and white illustrations by a variety of artists.  The portrait shown above is a two page frontispiece spread of Star Trek series creator Gene Roddenberry.

One of the most popular miniature books produced by the Amistad Press, Star Trek: A Television Series, 1966 –69, was published at a crucial moment in Star Trek history; after the series’ demise, yet released at the dawn of fan resurgence.  Star Trek: The Animated Series, which debuted in 1973 and ran for two seasons (1973 – 1974) voiced by the original cast, was developed as a direct response to the Star Trek fan base whose aggressive campaign pushed for the series revival.

Highlights in the Star Trek timeline for 1976 include James Doohan’s (Mr. Scott) appearance at the American Star Trek Convention (the first convention was held only 4 years prior), NASA’s first space shuttle named, you guessed it, the Enterprise, and the landing of the first spacecraft on Mars, the Viking 1, a unmanned U.S. planetary probe.  The first Star Trek movie, Star Trek: The Motion Picture, opened in theatres only 3 years later in 1979. 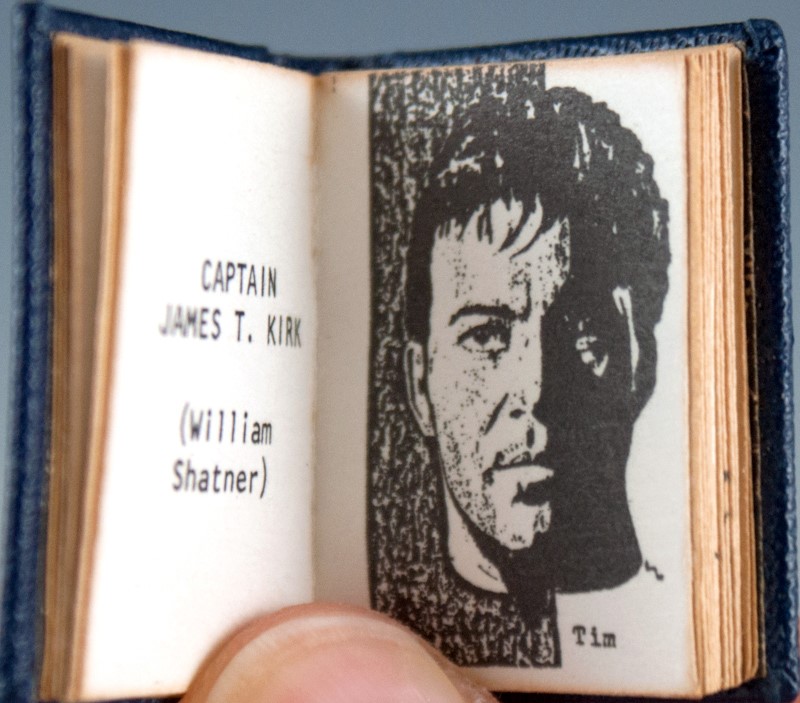 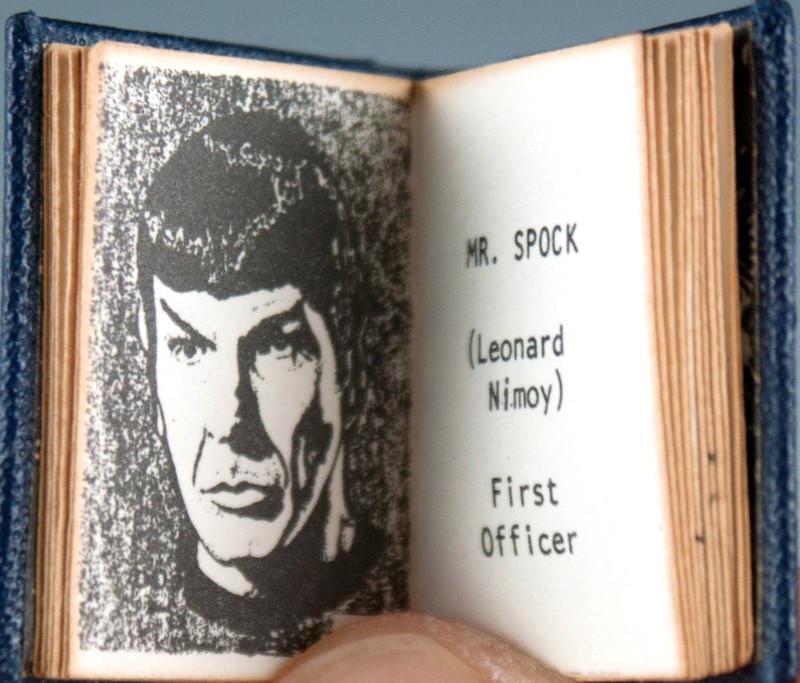 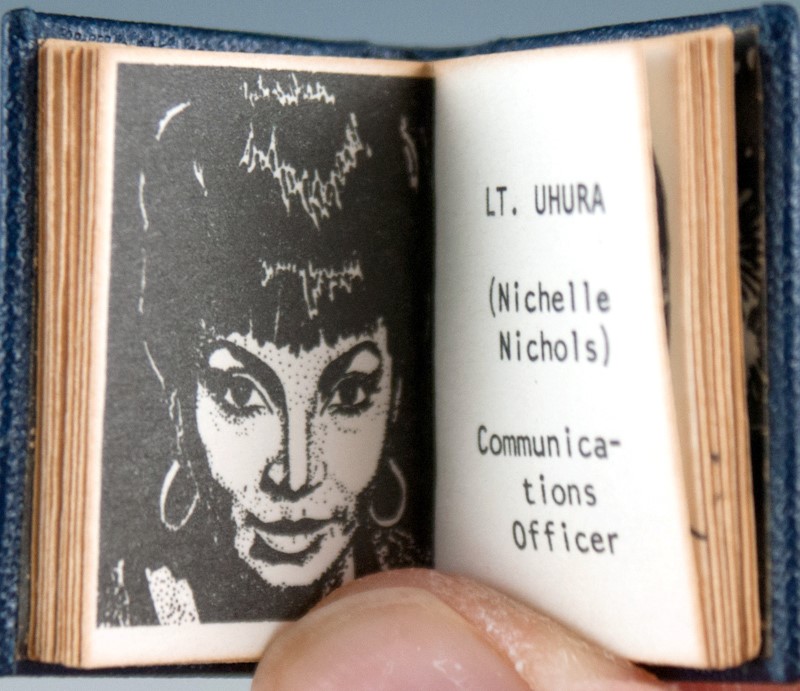 The book is also illustrated with the portraits of other crew members, two Star Fleet insignias, and a two page spread of the starship Enterprise. 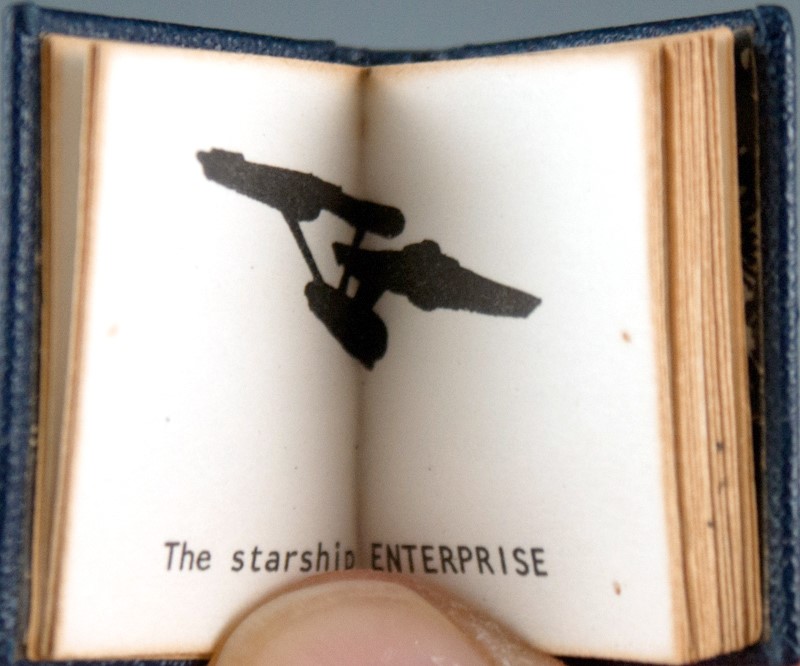 This book is but a small addition to the West Virginia and Regional History Center’s extensive Science Fiction collection that includes a significant collection of the works of Isaac Asimov, a prolific 20th c. author of science fiction, children’s books, and novels, among other genres.  Asimov is best known for his science fiction trilogy, Foundation, and the sci-fi classic, I, Robot.

In the world of Star Trek, the West Virginia and Regional History Center also has an archival collection of the musical scores for the series, Star Trek, the Next Generation, a gift from the composer plisherJay Chattaway, an alumnus of WVU.  Stay tuned for an upcoming blog post on this wonderful gift.

This tiny tome joins other miniature books in the Rare Book Room including a miniature by Pearl Buck, West Virginia author and winner of both the Nobel and Pulitzer Prizes, and Ambrose Bierce, an author best known for the short story, “An Occurrence at Owl Creek Bridge” and the satirical lexicon, The Devil’s Dictionary.

Miniature books are a hot collectible in the rare book world.  Another Star Trek miniature book by Yolanda Carter of the Amistad Press can be found in The Charlotte M. Smith Collection of Miniature Books at the University of Iowa.  According to the Miniature Book Society newsletter, (yes, there is one), prior to the 1960s, miniature books were issued at an approximate standard size of three inches in height.  It was during the 1960s that a new style in miniatures emerged, referred to as “one-inch doll house” books.  Yolanda Carter of the Amistad Press, designer and publisher of this Star Trek series miniature, was among the forerunners of the doll house book miniatures.

You can see this book, or any of the other miniature books in the Rare Books Collection, by contacting the West Virginia and Regional History Center to make an appointment.