From highways to buildings and even a giant radio astronomy telescope, U. S. Sen. Robert. C. Byrd left his mark on West Virginia. The eloquent Byrd, the only U. S. Senator to work his way through law school while in office, often held his pocket Constitution high as he argued for it, not the emotion of the day, to rule Senate votes.

Byrd died in 2010 while still in office. A traveling exhibit chronicling his life opens November 10 in the West Virginia University Libraries’ Rockefeller Gallery. A reception, to be held from 4:30 p.m. to 6 p.m., will include remarks from Dr. Raymond Smock, director of the Robert C. Byrd Center for Congressional History and Education, as well as David A. Corbin, former aide to Senator Byrd and author of The Last Great Senator. 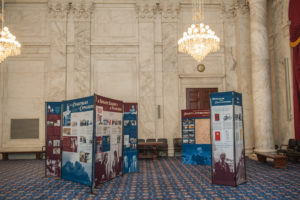 The Byrd Traveling Exhibit on display in the Kennedy Caucus Room of the U.S. Senate, photo provided by the Byrd Center.

“This exhibit shares the story of the longest serving United States Senator,” Smock said. “People who view the pieces will learn about the Senator’s early life and entrance into politics, his devotion to family and to the people of West Virginia, his public service and rise to leadership positions in the U.S. Senate, and his role as defender of the U.S. Constitution.”

The exhibit features more than 100 photographs and replicas of documents from the extensive Robert C. Byrd Congressional Papers Collection, housed in the archives of the Byrd Center.

The centerpiece presents a narrative of Senator Byrd’s life and career, with three main sections: “From Coalfields to Congress,” “Party Leader and Statesman” and “West Virginia’s Billion Dollar Industry.” Another segment highlights Senator Byrd’s faith, skill as an Appalachian fiddler, his historical scholarship and his defense of the U.S. Constitution. Capping the tribute is a section listing the many projects in West Virginia for which Senator Byrd obtained appropriations.

“Senator Byrd is an iconic figure in modern West Virginia history” said John Cuthbert, director of the West Virginia and Regional History Center. “While his name is no doubt familiar to the vast majority of WVU’s student body, it is likely that few know the remarkable story of his personal odyssey from humble origins to one of our state and nation’s most powerful and inspiration leaders.”

The exhibit will remain on display in the Rockefeller Gallery through November 28, when it relocates to the adjacent Milano Reading Room until December 7.

“Robert C. Byrd: Senator, Statesman, West Virginian” then resumes its state tour, which culminates in a celebration of Senator Byrd’s 100th birthday in November 2017 in Charleston. The tour is supported, in part, by a grant from the West Virginia Humanities Council, and from corporate and private sponsors including First Energy Foundation, Comcast and Piper Jaffray.