Rush Dew Holt, Sr. and His Fight for the Senate

I thought Rush Dew Holt, Sr. would be a fitting blog post subject, considering our upcoming elections.  (Remember to vote on November 8!)  Holt is generally credited with being the youngest popularly elected senator in the U.S. Senate.  However, that does not mean he was the youngest senator—depending on what you read, he is cited as being fourth or fifth youngest.  These gentlemen actually joined the Senate under the radar, since they all broke the rule that Senators must be 30 years old (U.S. Constitution, article 1, section 3, clause 3).

A piece of Holt campaign ephemera—he looks so young!

Holt gets his special distinction because those four senators listed above were not popularly elected, since state legislatures used to elect senators.  This changed in 1913, thanks to the 17th Amendment to the U.S. Constitution, which provided for the direct election of U.S. Senators.  If you are casting your vote in a senatorial race tomorrow, you can thank that amendment.  (If you, like me, wonder why there is no U.S. Senate race on West Virginia’s ballots this year, Wikipedia’s article on the Classes of US Senators can fill you in.)

However, Holt didn’t get his place in U.S. political history without a fight.  The Democrats’ primary race in 1934 was contentious—Holt had the support of Senator Matthew Neely, but not of Governor Kemp, and there were many candidates running against him.  After Holt’s victory in the primary, he was running against the incumbent, Henry Hatfield, who was a Republican, a doctor, and former West Virginia governor.  Holt won by nearly 70,000 votes. 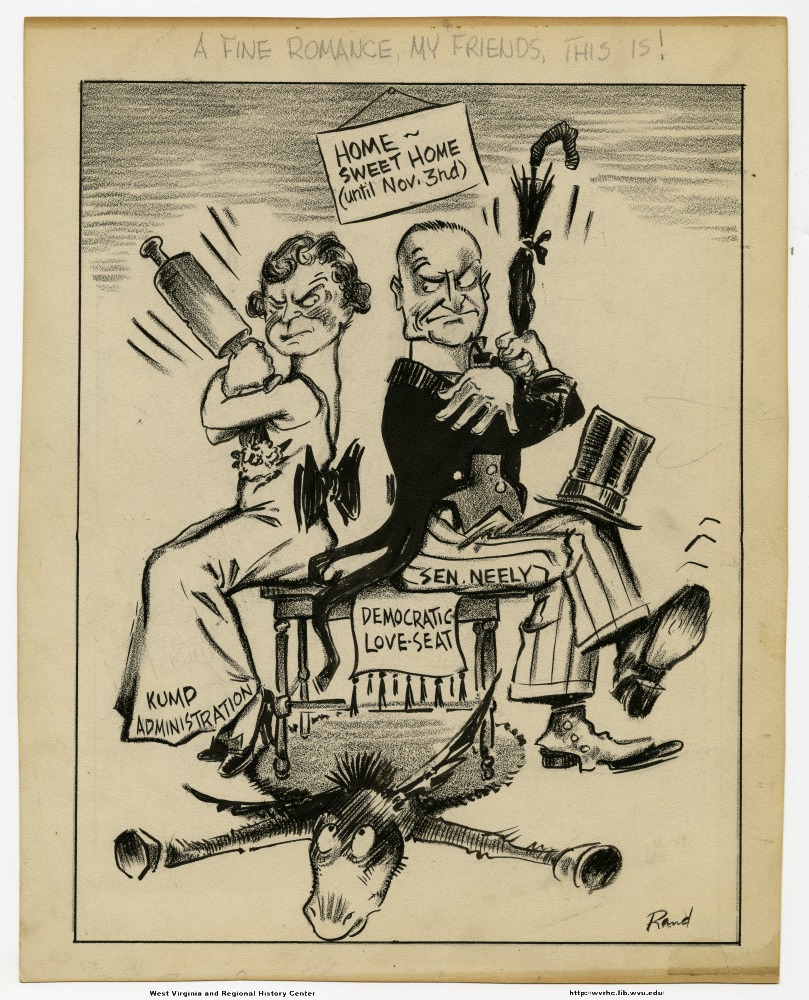 Political cartoon depicting the tense relationship between Democrats Kump and Neely, undated but likely from 1933-1937.

The question of Holt’s age had been raised in the primaries and his victory meant the Democratic party had to come up with a strategy to fight the Senators that thought Holt ineligible.  It was decided that Holt would not present himself to take the oath of office until he turned 30, though he still participated as much as he could, sitting in the back of the Senate next to Huey P. Long.  This solution was not satisfactory to everyone.  We find a good summary of the opposition’s argument in a New York Times letter to the editor, printed July 18, 1935:

“… that provision in the Constitution must have been made with the intent of fixing 30 as the minimum age at which a Senator could be chosen. Therefore Mr. Holt was ineligible, no matter what age he waited to reach, since he was elected at the ineligible age.” [emphasis added]

As noted by Politico’s Andrew Glass, due to this argument that Holt was ineligible because of his age at the time of the election, “Hatfield asked the Senate to declare him as the winner because he received the most votes among the eligible candidates.”

Naturally, this concerned people who voted for Holt, and they made their feelings known.  The WVRHC’s collection of Sen. Holt’s papers includes multiple copies of this form letter from various UMWA members to the chair of the Senate Elections and Privileges Committee. 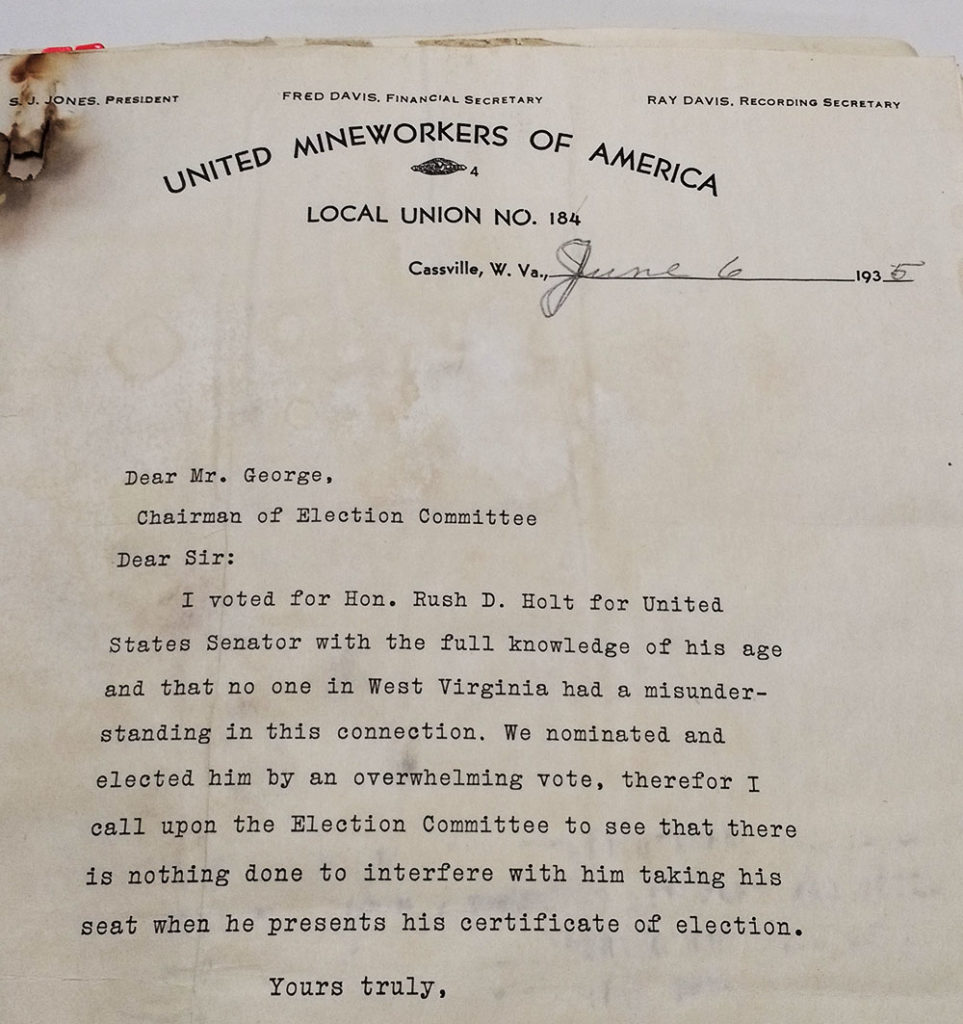 The Senate Elections and Privileges Committee started considering the case of Holt’s eligibility in late May of 1935, and the committee finally accepted him on June 21, two days after his 30th birthday. 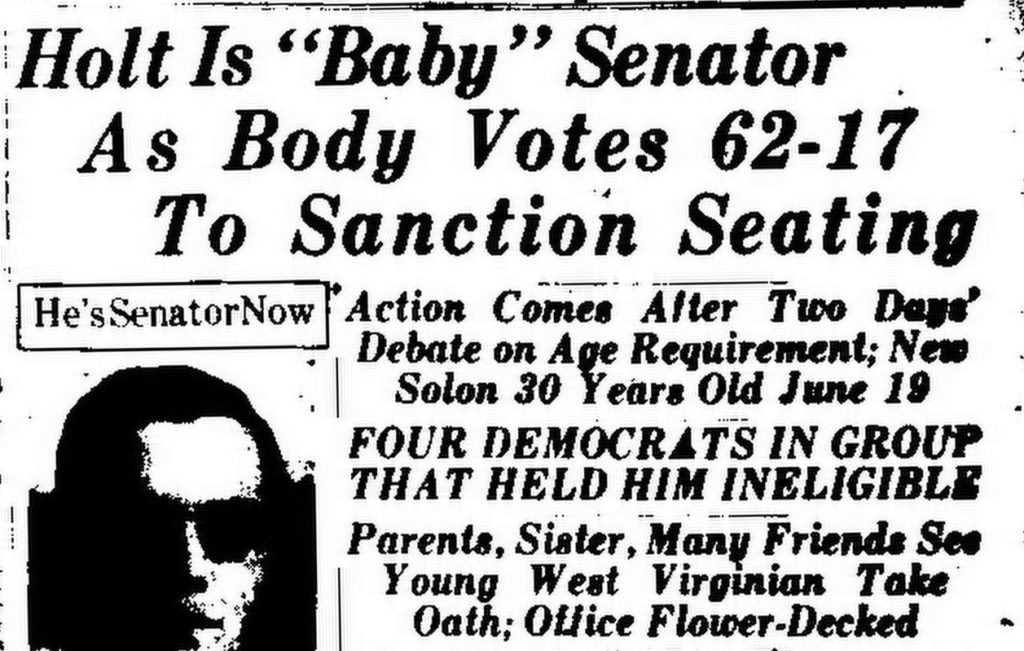 Holt’s situation was front page news in West Virginia in mid-June.  Above is the headline from the front page article on his seating that ran in the Charleston Gazette on June 23, 1935.

The WVRHC is currently working on a project to improve the arrangement and description of the collections of Rush Dew Holt, Sr. and his wife, Helen Holt.  We hope to have the new and improved finding aids available online by mid-2017; in the meantime, the collections can still be used by visitors to the Center. 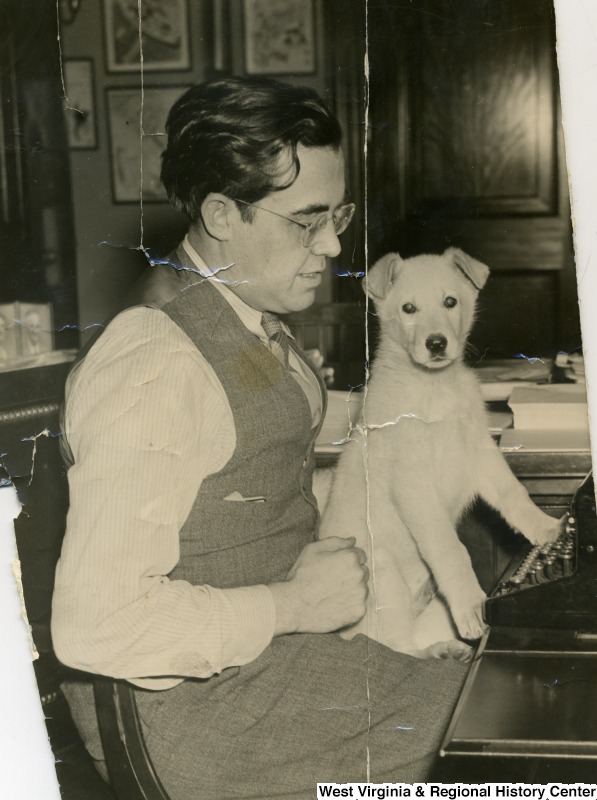 Photo of Holt with an adorable dog, probably taken some time after securing his Senate seat

6 Responses to 'Rush Dew Holt, Sr. and His Fight for the Senate'