Up in Smoke: The Fascinating Story of a West Virginia Newspaper, The Volcano Lubricator

In 1857, William Cooper Stiles, Jr. (1839-1896) arrived in Wood County with plans to search for suitable oil fields for his new enterprise.  The sandy soil of Wood County seemed to Stiles to be perfectly suited for his plans.  Stiles purchased 2,000 acres in Wood County in 1864, just as the Civil War was drawing to a close, and formed the Volcano Oil and Coal Company.  Stiles commenced drilling on the undeveloped land and then began to lay out the town of Volcano.  His future employees and their families would need residences and businesses with access to markets.  At its peak, the population of Volcano reached just short of 4,000 residents.

The growth of the oil industry in Wood County and the surrounding area brought substantial increases in population and the establishment of new towns like Volcano.  Newspapers such as the Volcano Lubricator, Sistersville Oil Review, West Virginia Walking Beam and West Union’s Derrick Herald served the oil fields and the boomtowns that arose overnight making West Virginia a leading center of America’s oil industry during the late nineteenth century. 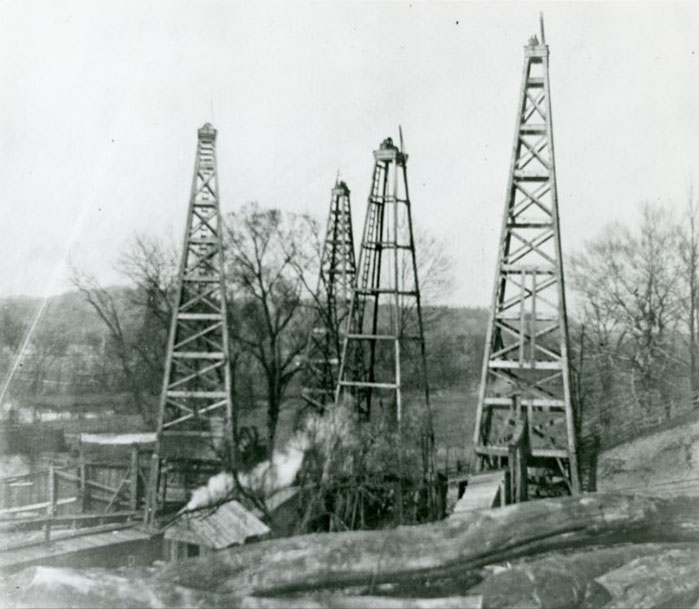 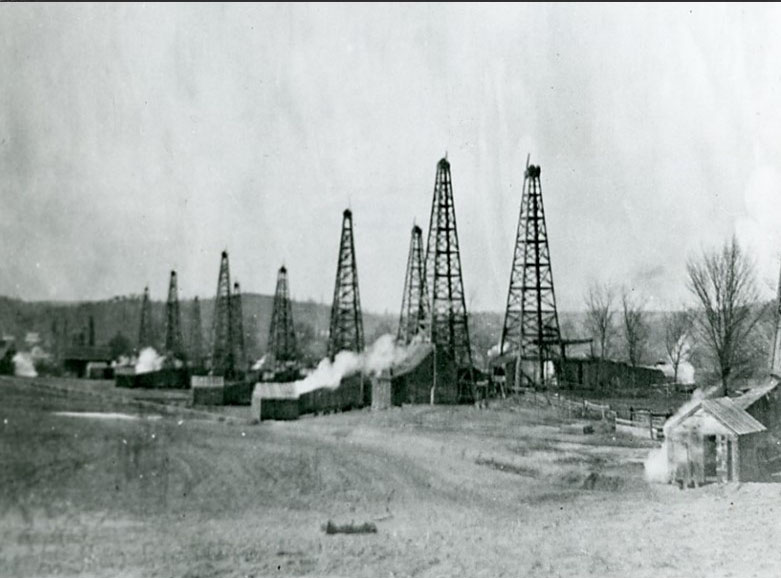 The Oil Fields: Wooden derricks stretching across the horizon.

George Perry Sargent (1843-1899) was the editor and publisher of the Volcano Lubricator.  The newspaper ran from 1871-1879.  The newspaper’s name derived from the newly discovered use for oil as a lubricator, which was invented in Volcano.

Sargent, as publisher and editor of the Volcano Lubricator, reported on daily events in a boomtown that seemed to expand overnight, and he tended to shape this new population with editorials that were moralistic in tone.  The following is an example of the type of content Sargent printed when he saw or heard of something that didn’t fit with his high moral standards of behavior:

Although Sargent holds back on the names of the men in this report, he has no compunction naming the woman involved.

Business information regarding the oil fields was regularly reported in the Volcano Lubricator and in turn, its reporting was repeated in such important reference resources as The Derrick Hand-Book of Petroleum Reports:

In addition to business reporting, readers also found advertisements in the pages of the Volcano Lubricator.  Here are a few examples of what subscribers could expect to see:

Contents of the issue include:

Columns:
All Sorts – “Grapes are so cheap in Iowa they sell for 3 cents a bushel!”
“A Detroit 11 year old girl chews tobacco!”

Perhaps the first question that comes to mind concerning the arrival of fresh oysters, a real treat for the oil hands and their families, would be to ask from what body of water might the oysters have originated and how were they shipped to Wood County?  Just how “fresh” were they upon arrival? 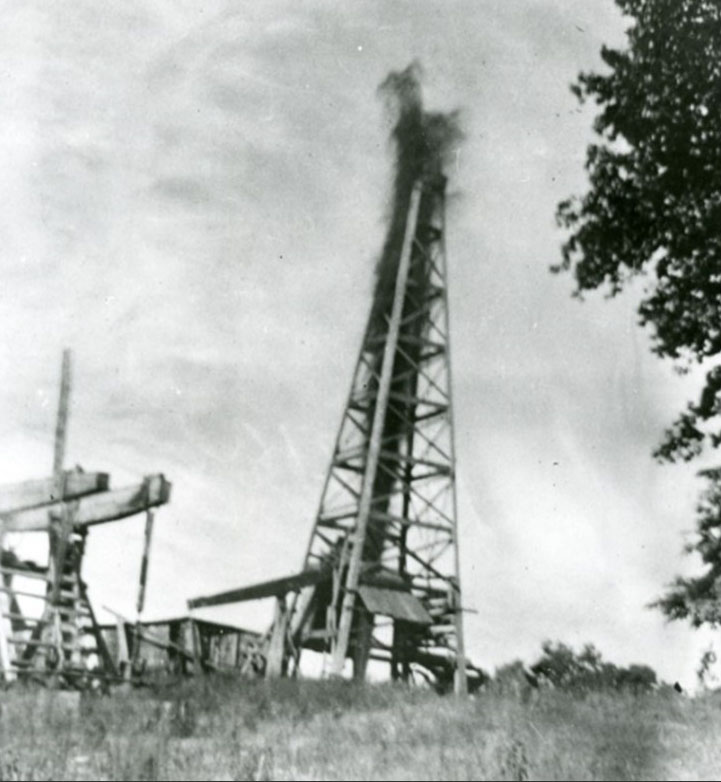 A gusher!  The pumping apparatus to the left behind the derrick is referred to as a “walking beam,” for the movement it makes while pumping the oil.

Volcano had not one, but two newspapers in town.  The other newspaper was called the Walking Beam, for the pumping mechanism used to bring oil to the surface. According to Wikipedia, “A pumpjack is the overground drive for a reciprocating piston pump in an oil well.  It is used to mechanically lift liquid out of the well if not enough bottom hole pressure exists for the liquid to flow all the way to the surface.  The arrangement is commonly used for onshore wells producing little oil. … The engineering term for this type of mechanism is a walking beam.”

Here’s a taste of what subscribers could expect from the pages of the Walking Beam:

“Story of an Artic Expedition”

“How to Become a Comic Writer”

Although it might seem surprising to see an article on the art of the comic writer in the pages of an oil field newspaper, humorous stories were very popular at the time.  Comic writers of the day included Samuel Clemens, better known as Mark Twain, and Bret Harte, a comic writer even more popular than Twain.

Unfortunately, tragedy was soon to strike the town of Volcano.  Fire broke out in one of the businesses downtown and though attempts were made to contain it, the fire quickly spread, consuming nearly the entire town as well as many of the residents’ homes.  In the end, the combination of highly flammable oil, homes, businesses, derricks, oil rigs and pumps constructed from wood, and nonexistent firefighting techniques allowed the fire to sweep through the town destroying everything it touched.

The Volcano Lubricator reported the tragedy with this headline:

The newspaper included a partial list of the businesses destroyed in the fire, including both the offices of the Volcano Lubricator and the Walking Beam:

The town of Volcano never recovered from the devastating fire.  Both newspapers, the Volcano Lubricator and the Walking Beam, moved to Parkersburg in an attempt to revive their businesses.  Van A. Zevely, the publisher of the Walking Beam, issued this ad seeking support in the August 3, 1879 fire edition. 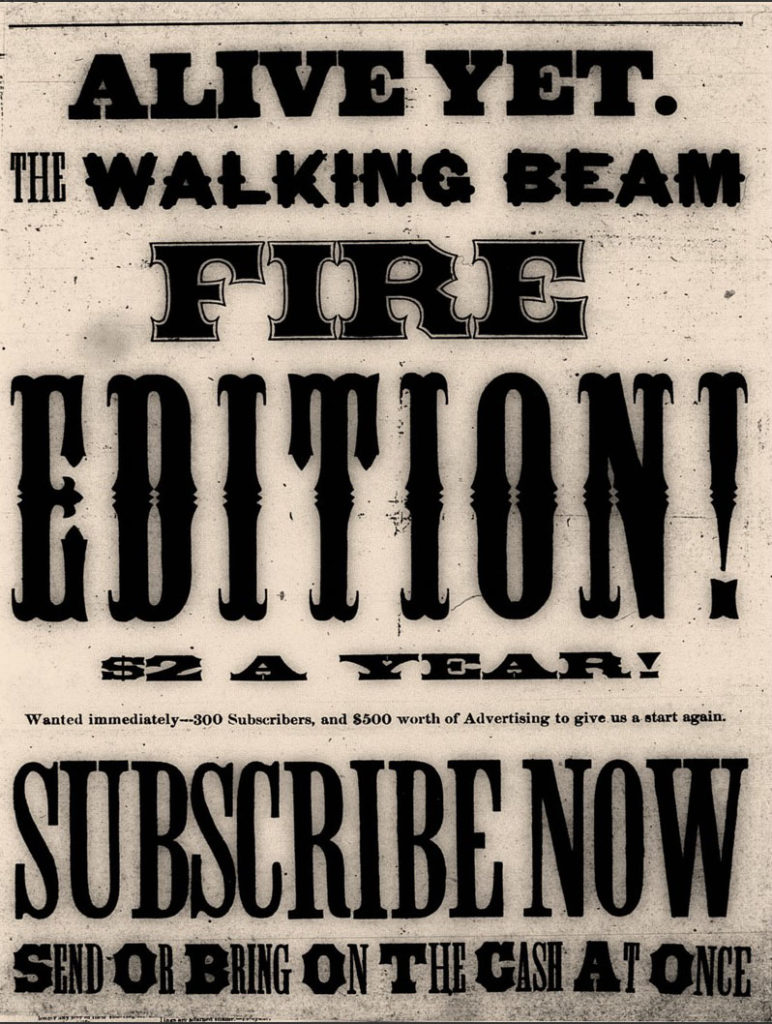 This advertisement relates the dire straits both newspaper publishers were under after the fire.  Zevely’s plea for 300 subscribers at two dollars a year and five hundred dollars’ worth of advertising would have been a stretch for a town that was completely consumed by fire and residents who were struggling to rebuild.  Neither paper survived the transition in Parkersburg.

The WVRHC will be digitizing both newspapers as part of the third grant awarded by the National Endowment for the Humanities/Library of Congress National Digital Newspaper Project.  In the near future, both newspapers, as well as several others in the third grant cycle, will join the WVRHC’s digitized historic West Virginia newspapers from the first and second grant cycles on the Library of Congress Chronicling America website:  http://chroniclingamerica.loc.gov/newspapers/west_virginia/

Come on in and read more about it!

One Response to 'Up in Smoke: The Fascinating Story of a West Virginia Newspaper, The Volcano Lubricator'