This Day in History: Farmers’ Week

While searching for a blog post topic, I came across a mention of Farmers’ Week, January 5-9, 1920.  I had never heard of Farmers’ Week before, so I combed through the WVRHC’s printed ephemera, photos, and our vast collection of university publications till I found out about this great educational program from WVU’s College of Agriculture. 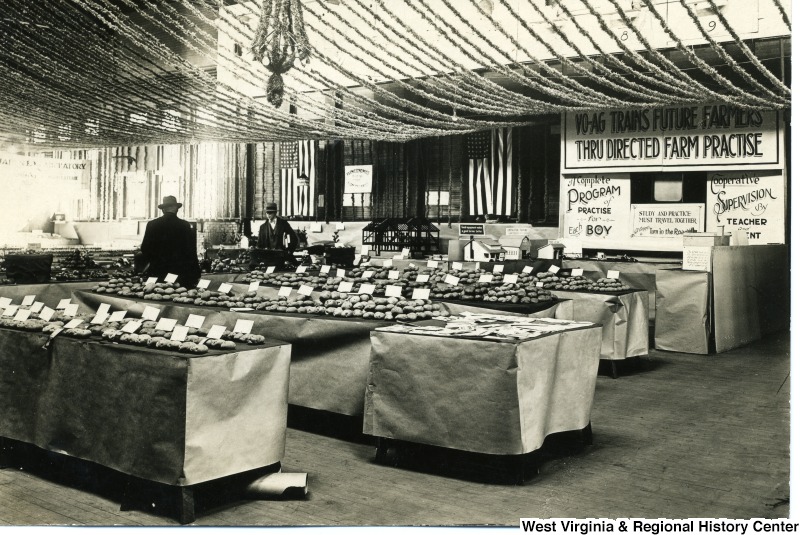 I haven’t found a distinct beginning for Farmers’ Week, but it looks like the idea was already brewing in 1902, when the College of Agriculture advertised six- to twelve-week short courses on agriculture. By 1905, it seems they were really getting into the swing of it.  Below is an excerpt from the 1905 WVU College of Agriculture pamphlet “Special Courses for Practical Farmers”:

It is now realized that the farmer must be specially educated for his business as well as the engineer or the doctor or the teacher for his… To help in supplying this demand, West Virginia University offered last winter (in addition to its regular courses in Agriculture running through the school year and its short courses confined to the Winter term) a special FOUR WEEKS’ LECTURE COURSE in the month of January. The immense good received by those present and their hearty appreciation of the course, led the University management to continue this work for the farmers of West Virginia. And so during the four weeks beginning the second Monday in January, 1905, special opportunities for the farmers of West Virginia will be again offered.

You can find more information about that pamphlet and see a full PDF scan here: https://pec.lib.wvu.edu/catalog/wvulibraries:57584.

I found other university publications that reaffirmed Farmers’ Week as WVU’s effort to address the needs of farmers across the state who couldn’t attend WVU for a full bachelor’s degree in agriculture but who could learn practical information and techniques in these short concentrated courses at the beginning of the year.  I think this was a great way for WVU to fulfill its land grant mission! 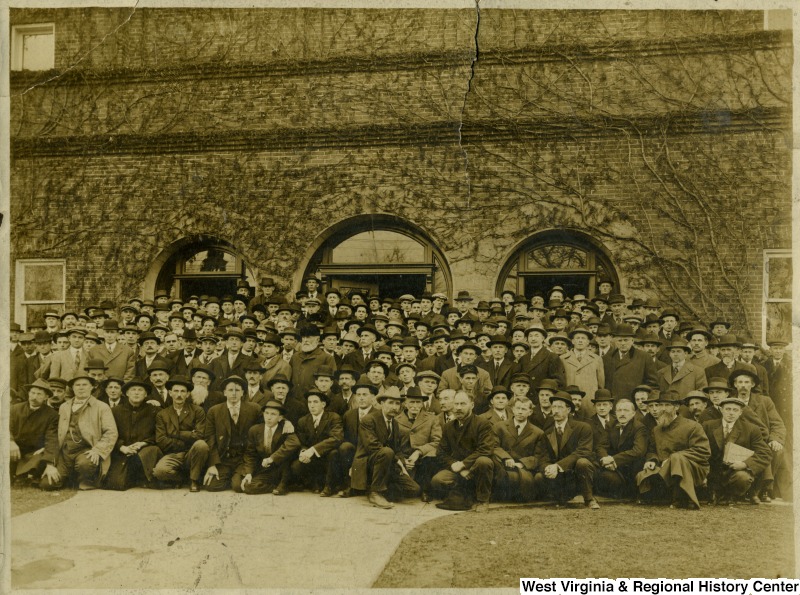 The Fairmont West Virginian newspaper also provides more detail on the program.  Below are articles from December 15 and 18, 1914. My favorite part of the first article is that one county agricultural agent promised to pay the expenses of anyone who attended and didn’t think it was worth the money.  What a ringing endorsement!  The article also mentions that other states hosted similar Farmers’ Weeks at that time.

(The Dec. 15 image has been cropped and rearranged for easier reading.) 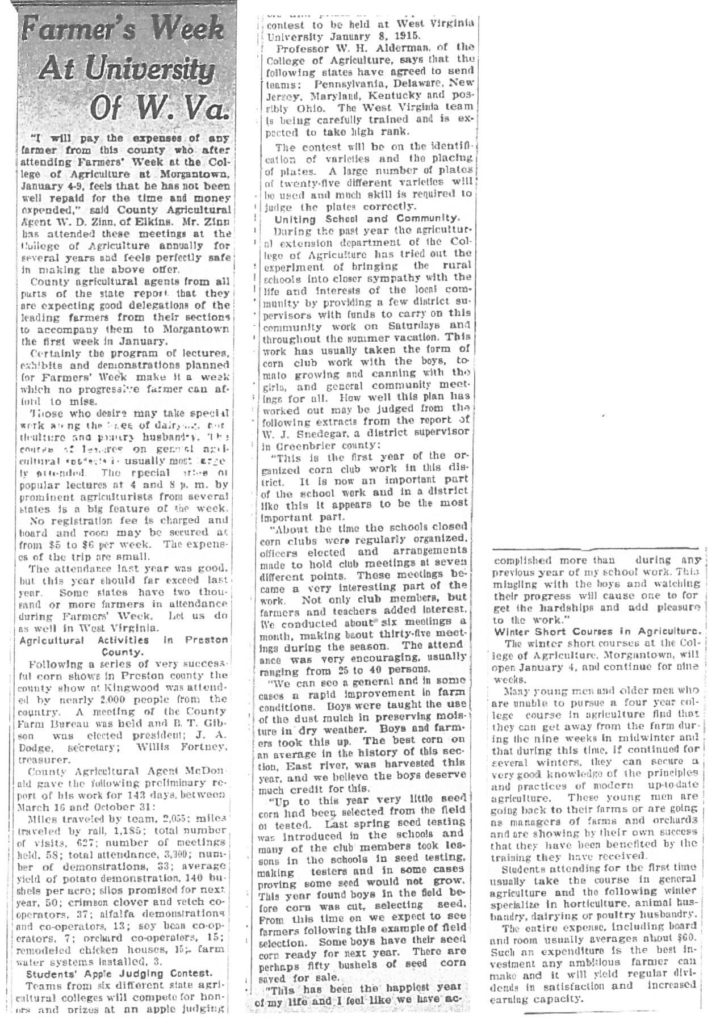 For your reading pleasure, I’ve also scanned the bulletin announcing the program and courses for Farmers’ Week 1915, the very one that the Fairmont paper was touting. You can read more about the three sections: general agriculture, dairying, and horticulture. The program also lists the titles of the lectures available, everything from berry growing to hog cholera.  There was no registration fee and no textbooks to buy, so farmers only had to pay for travel and room and board. Click here for the Farmers Week 1915 Program 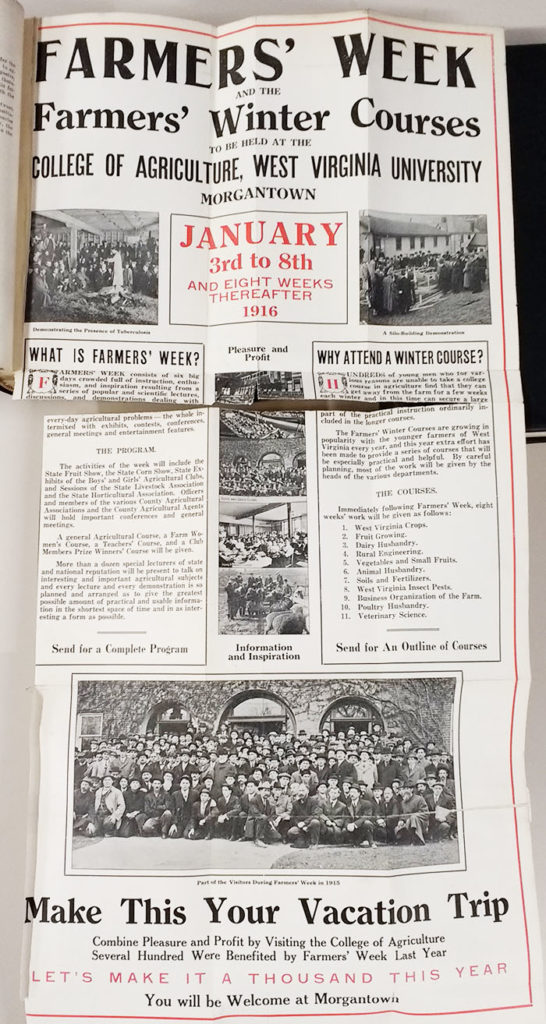 Side note: The above image is also a good example of why we don’t suggest gluing oversize pages into books, notebooks, etc.  It used to be common practice to bind the University bulletins together in large books each year; that’s how this poor poster ended up stuck in a book.  One of the WVRHC’s staffers is working to get this poster out of the book so we can stabilize it for future researchers.

The Farmers’ Week of 1922 was a big enough deal that Governor Ephraim F. Morgan came to give an address on January 13.  Topics in the speech include Morgan’s love of WVU (he was an alum) to farmers’ politics to taxation, but this is my favorite excerpt:

Those who are unable to understand the whisperings of the giant elms, who are unfamiliar with the stories told by the tiny rivulets that flow and trickle through wooded fields, who have not stood mute as the branching hemlocks in the mossy valleys sang to the stars above, do not comprehend the fullness of nature and have but faint conception of the natural beauties of the universe, although they may have lived where man’s art has reached the highest pinnacle and science has achieved renowned and enduring fame.

If you’d like to read the full speech, come to the Center and ask to see P7676.

Another short course for Farmers’ Week was offered in January 9-13, 1928. Other week-long courses on topics such as poultry, farm management, and bee keeping, were also advertised, so farmers could attend any that they liked or all of them.  By this point, the registration fee was raised to $1.

I haven’t yet found out when the Farmers’ Week courses ceased; I have a feeling they morphed over time into something new.  A University Bulletin from 1941 advertises for a “Farm and Home Week,” which had separate sessions for men and women. You can see the schedule for the fourth day below.  It looks like similar educational offerings may have been available at least through the 1950s.  I expect that a detailed review of the College of Agriculture materials in our series of University bulletins would reveal the progression of these courses over time. 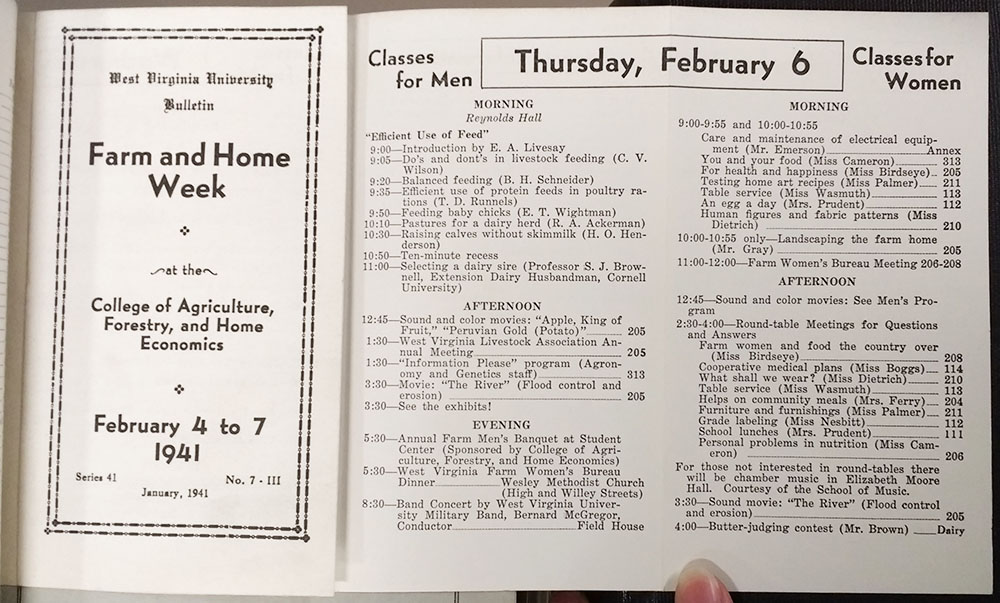 If anyone has more information on Farmers’ Week or Farm and Home Week, please share with us in the comments!

One Response to 'This Day in History: Farmers’ Week'