The display will include more than 30 prints made from glass plates from the holdings of the West Virginia & Regional History Center that illustrate the formative years of WVU from 1867-1920. The exhibit will be open to the public Monday-Friday, 8:15 a.m. to 4:45 p.m. and remain on display through March 31.

“These photos reveal just how much the University has changed from its early years to the present,” WVRHC Director John Cuthbert said. “Morgantown was a sleepy little village, Westover was non-existent and WVU consisted of just a single building at times. The founders would be stunned to see the sprawling globally significant institution it has become.” 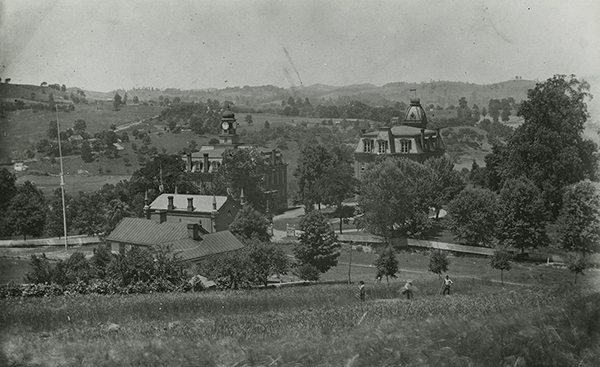 One image in the exhibit is this early photograph of the West Virginia University campus taken from the hill now occupied by Stalnaker Hall, ca. 1878.

It would be three years before the school opened its first new building, Preparatory Hall, which would later become Martin Hall. The first section of Woodburn Hall, initially called University Hall, would be built in 1876.