Blog post by Jane Metters LaBarbara, Assistant Curator, WVRHC (with big thanks to Jessica Eichlin, Photographs Manager, for finding many of these great photos).

Since Stansbury Hall has been in the news recently, I decided to investigate the history of the building and the man for whom it was named.  The first thing I learned: Stansbury Hall was once the Field House for our sports teams.

When was it built?

Wikipedia’s short article on Stansbury Hall tells us it was formerly the WVU Field House and it opened in 1928/1929.  The full story is far more dramatic.

WVU Basketball got started around 1904.  The basketball team first played in the basement of Commencement Hall, then the basement of the Armory, before a few years’ hiatus.  Then, the Ark was built.  (If anyone knows why they called it the Ark, please let me know.)  A “barn-like structure” (Antonik 2010, p. 5), the Ark had playing space and seats for 900 but no dressing rooms or showers–players had to run to the adjacent heating plant building for that. The Ark was built in 1916, sitting where Stansbury Hall does now, and served as the home of Mountaineer basketball until it had to be deconstructed to make way for the Field House. 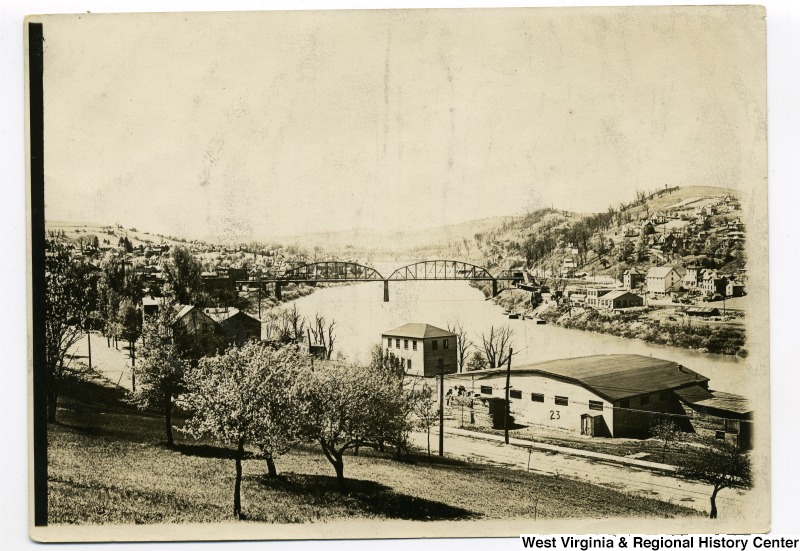 The Ark is the white building with a curved roof.

The Ark was apparently a bit drafty, and lacking in the space and amenities that the university’s sports program, students, and alumni wanted.  The space was used for more than just basketball, as the headline below shows. 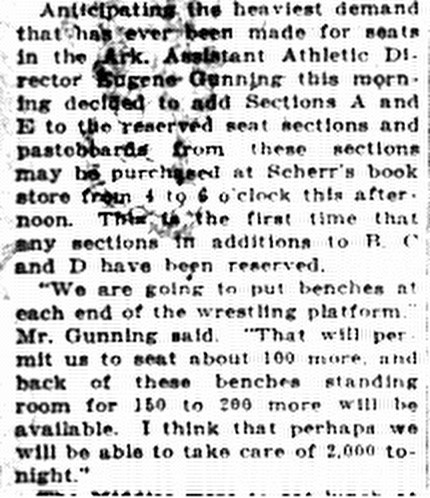 This clipping from the Morgantown Post’s March 14, 1925 article shows that seating in the Ark was inadequate for the events they wanted to hold.  Apparently, complaints about the space were pretty regular.  The construction of Mountaineer Field (1924) probably stoked the fires even more. Finally, enough was enough.  Students got fed up.  They got organized, and they took their fight all the way to the governor. 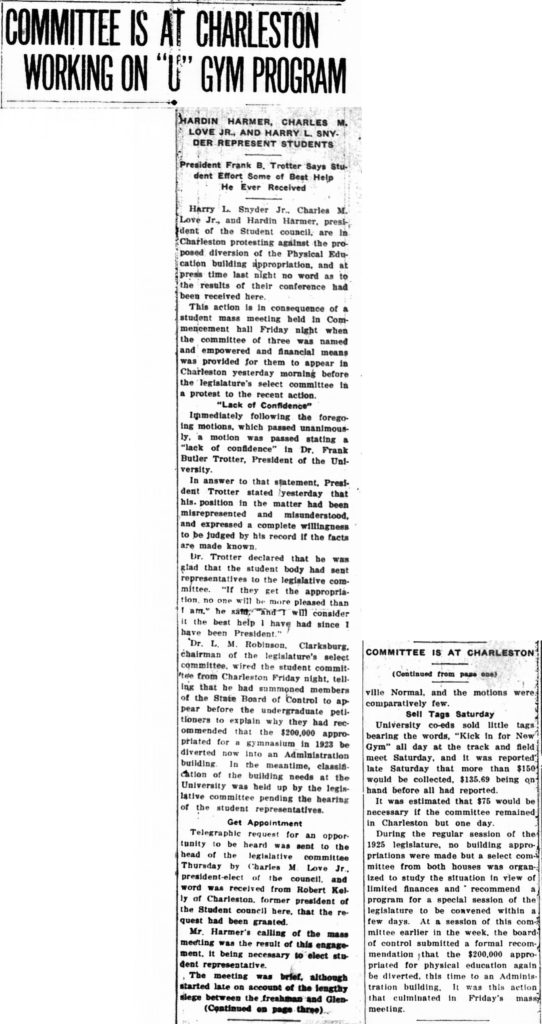 WVU students had a mass meeting on May 16, 1925, and voted to take on the expenses of sending three student representatives to the state legislature to protest lack of appropriations for a gym.  Apparently, they raised the money for this by selling little tags that said “Kick in for the New Gym.”  The students also passed a motion stating “lack of confidence” in the University President at the time, Dr. Trotter.  Trotter, for his part, said he was glad for the help that the students were providing.

The three student delegation went to Charleston, appeared before the joint legislative revenue committee, and dined with Governor Howard Gore on May 18th to talk about their proposal for appropriations for the physical education building.

It worked.  The appropriations were approved!

Additional appropriations were gathered, and in the end the Field House cost $250,000 to build (and a further $60,000 to equip) and was probably finished in late 1928.  The WVU Mountaineer basketball team played (and won) their first game in the Field House on January 3, 1929.  Not only did the facility have the space (and probably the showers) the students wanted, it “gave WVU the biggest and most modern athletic arena in the tri-state area and it also housed the School of Physical Education” (Antonik 2011).

It was a good thing the Field House was built then; the stock market crash started the Great Depression in October 1929, and probably would have put dreams for the building on ice had the students not taken charge. 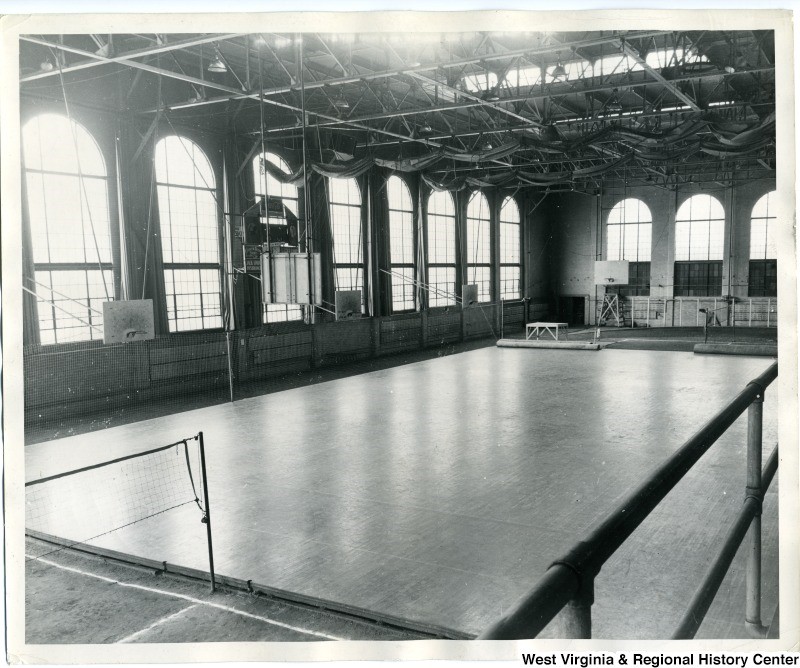 Interior View of the Field House 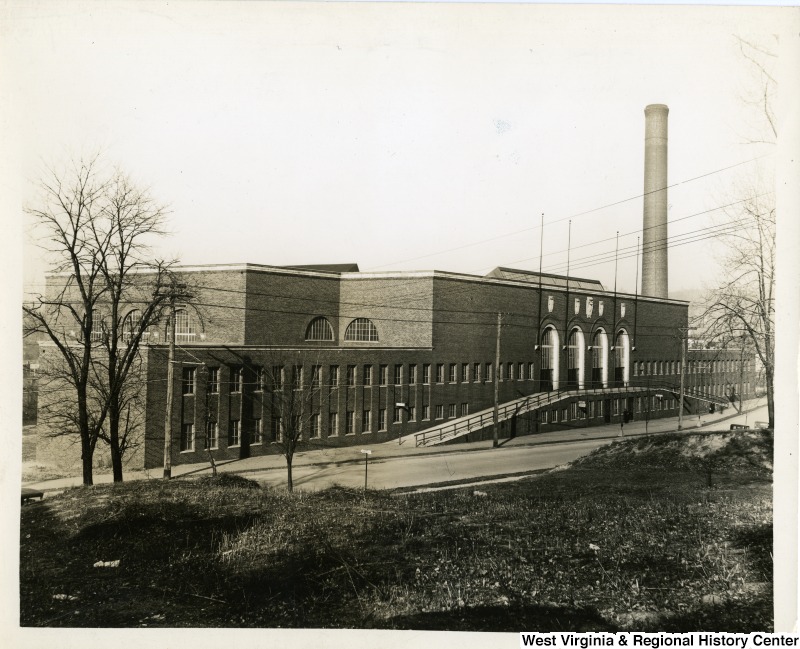 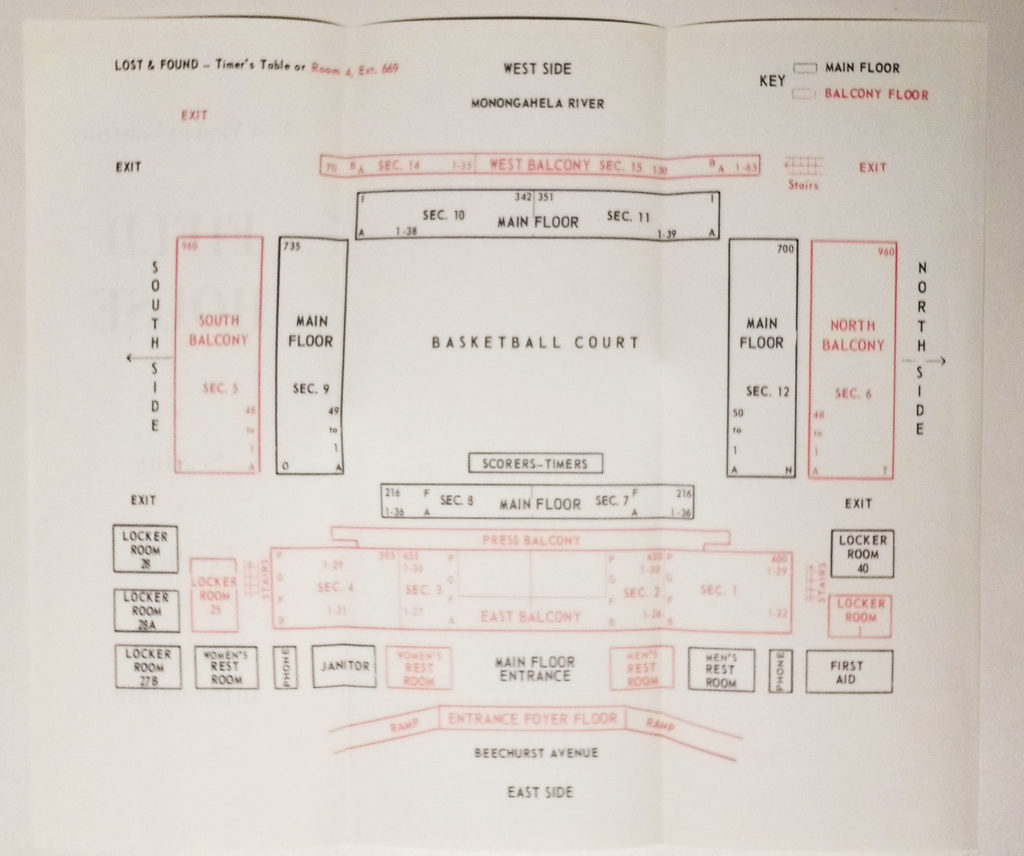 The Field House served as more than just the site of WVU basketball games, where the likes of Hot Rod Hundley and Jerry West played.  It was also the site of events like WVU presidential inaugurations, commencement, registration, and more. 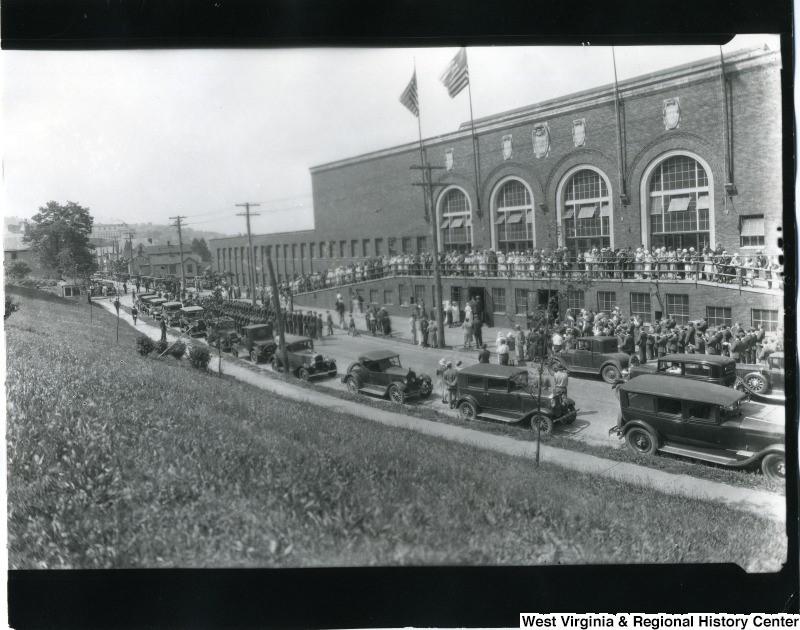 A presidential inauguration at the Field House, 1929 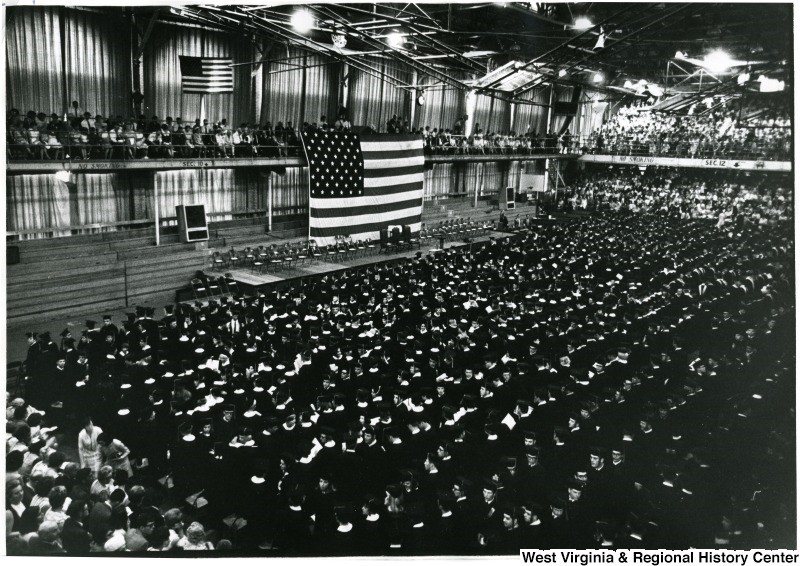 Commencement inside the Field House, 1967 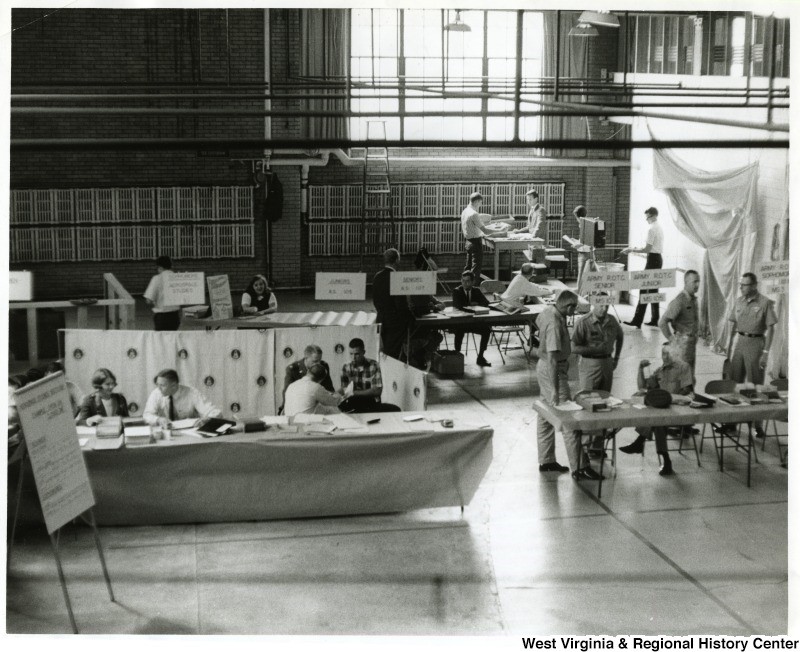 Registration inside the Field House, ca. 1966

When did the Field House get renamed, and for who?

Stansbury actually started work as the WVU Athletic Director long before the Field House was built—he served from 1916 to 1938.  In 1915, he was athletic director at his alma mater, West Virginia Wesleyan. His appointment was contentious—the sports rivalry back then between WVU and WV Wesleyan was bitter.

His contributions included pushing for the building of the old Mountaineer Field, the Field House, adding new sports (wrestling and boxing) to WVU, and overseeing successes of our football and basketball programs.  “He also sponsored and directed the WVU Indoor Track Games that brought some of the nation’s greatest track and field athletes to the WVU Field House from 1929-39. The list included Olympic sprinters Jesse Owens, Ralph Metcalfe and Eddie Tolan, Olympic 800-meter champion John Woodruff and broad jumper Eulace Peacock” (Antonik 2011).

In June of 1938, Stansbury resigned to become the director of the West Virginia Chamber of Commerce. 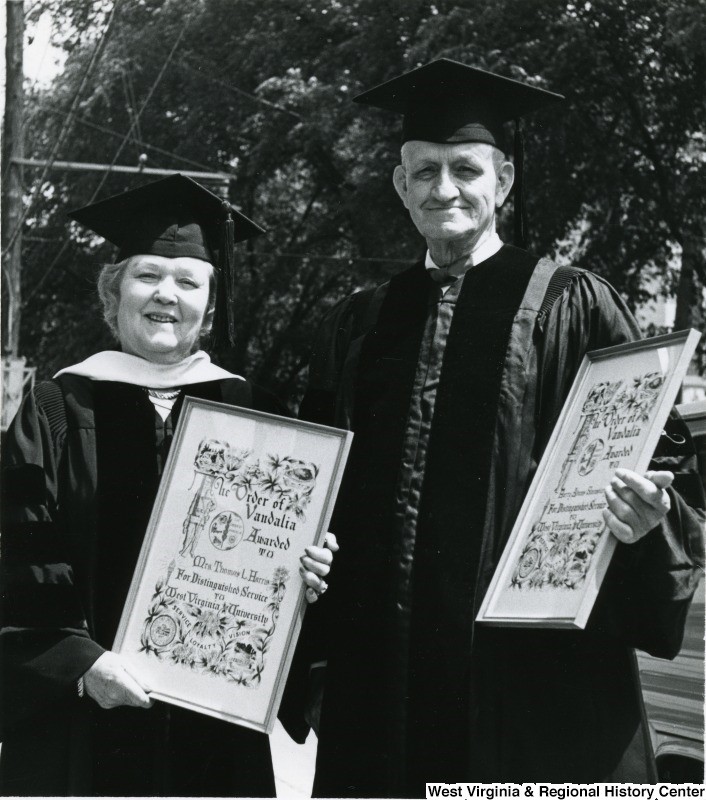 The Building Through the Years

In 1947, a fire in the Field House destroyed the bleachers.  Mrs. George Hardwick reported the fire in time for the building to be saved, and was awarded a lifetime pass to University games (Doherty 1980 p. 553 n. 104).

The building also had a few interesting next door neighbors.  In the 1940s and 1950s, a school building beside the Field House was use as a grade school for training education majors. The building was an African-American school prior to that. In the 1951/1952 WVU student handbook, it is marked on the campus map as the “Alexander Wade School”—by the 1956 campus map, it became the “Laboratory Elementary School.”  You can see what it looked like in the photo below. By 1957, the little school house had been replaced.

The 1957 campus map shows Engineering Building Number 2 (see below) occupying the old school’s space beside Stansbury Hall.  I haven’t yet learned when they tore that down.  Today, that space is lot 11, where I park every day. 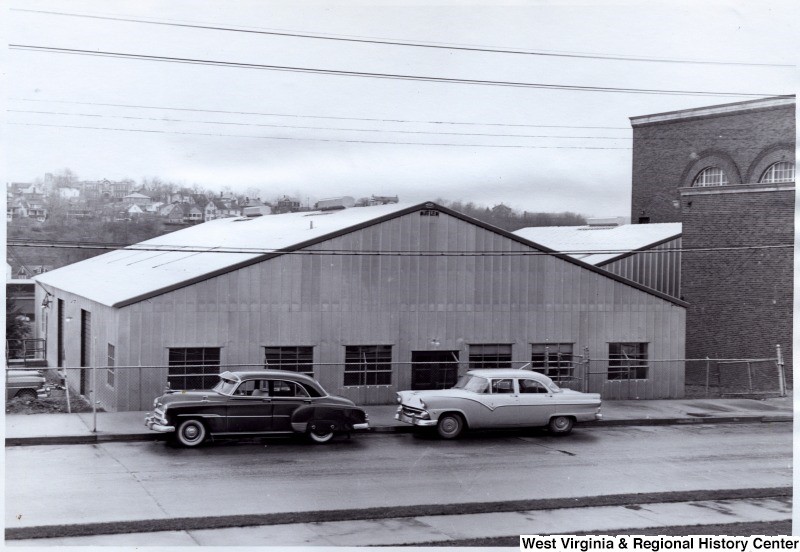 Eventually, crowd sizes got the better of Stansbury Hall, and it ceased to serve as an arena in 1970 when WVU Coliseum opened.

On Friday, February 10, 2017, WVU announced that Bob and Laura Reynolds had gifted $10 million to the WVU College of Business and Economics to provide the initial funding for a new business school complex in their name.  Fundraising is still ongoing, so there is no timeline for construction yet, but we do have conceptual drawings, one of which you see here: 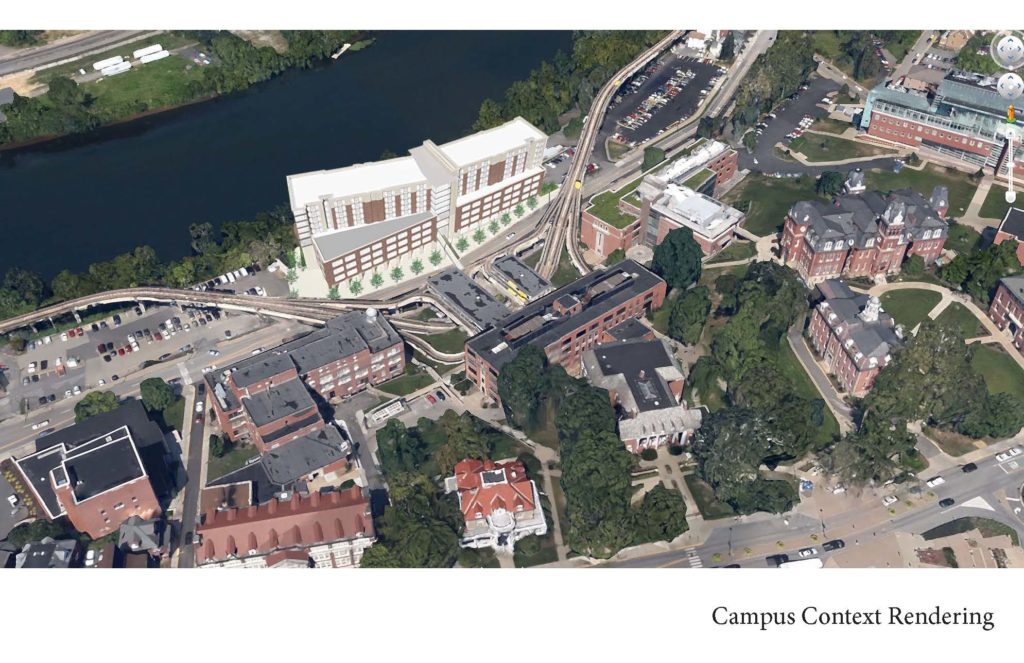 If any of our readers have fond memories of Stansbury Hall, feel free to leave comments below. This blog is moderated, and I am sometimes slow to approve comments, but I’ll keep my eyes peeled!

For conceptual drawings and to learn more about the gift, the givers, and the College of B&E, check out: http://business.wvu.edu/reynolds

7 Responses to 'Stansbury Hall: A Piece of Campus History'