I recently processed a new collection for the archives here at the WVRHC – A&M 4179, the Larry Jones, Collector, Postcards and Photographs.  Among this lovely collection of West Virginia related postcards and holiday postcards are three mounted photographs of the Student Army Training Corps (SATC) of West Virginia Wesleyan College–two of them include Ralph Jones. One of them is below. 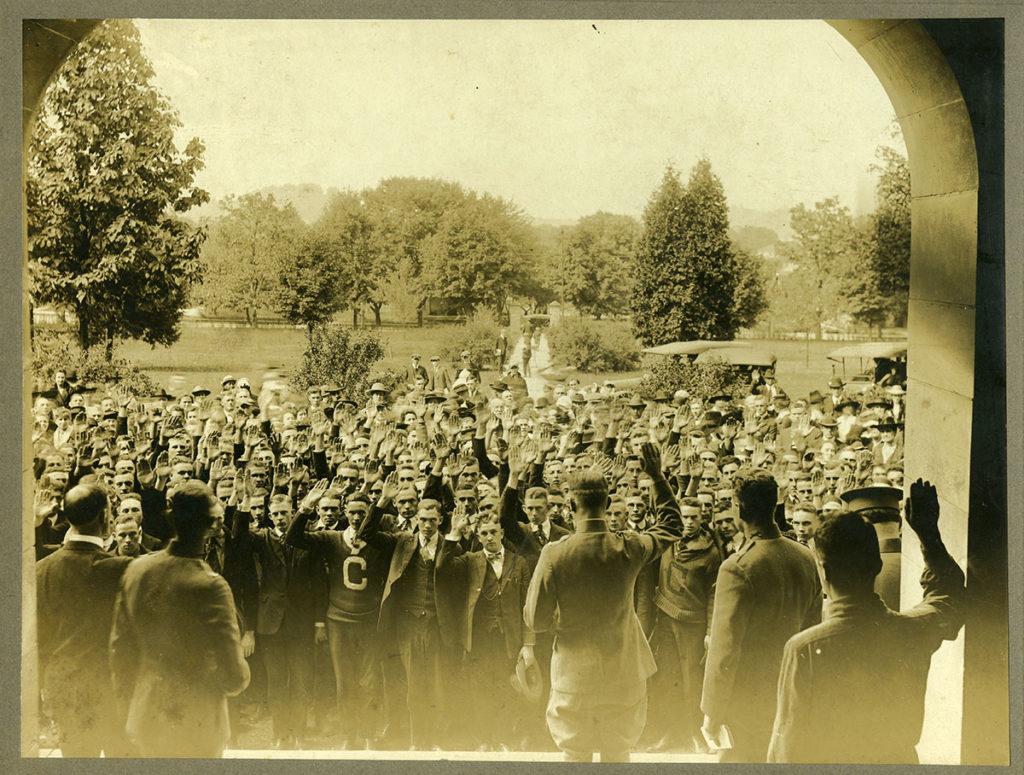 Ralph Jones is behind the right shoulder of the fellow in the “C” sweater—can you tell which one?

A quick search of the WV Vital Research Records database shows that Ralph Reynold Jones was born June 20, 1900. It also shows that Ralph’s father, listed as a “baggage master” (railroad clerk), had to provide an affidavit to have some of the birth record information corrected in 1941.  You can view the corrected image of the register of births at this link: http://www.wvculture.org/vrr/va_view.aspx?Id=1971433&Type=Birth.

My curiosity led me to look for Ralph in the WV Wesleyan yearbook, the Murmurmontis, and I found his picture in the 1920, 1922, and 1923 volumes—because of the way they produced yearbooks back then, this means that he was a senior in the 1921-1922 academic year.  Digital copies of all of these volumes can be found in the Internet Archive. 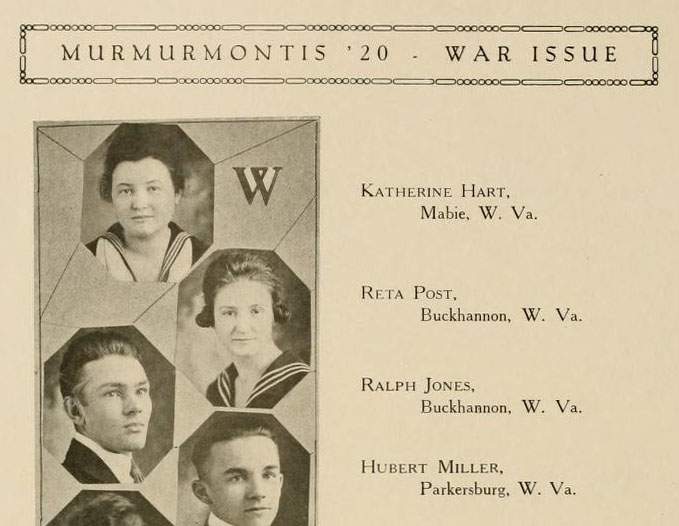 From the 1921 Murmurmontis–sadly, dashing young Ralph’s photo doesn’t appear in this volume, but he is listed as a member of the sophomore class. I was less disappointed about him not appearing in this yearbook when I was told that his signature appears on the front endpapers.  Thank you, Ralph, for donating this yearbook to WV Wesleyan! 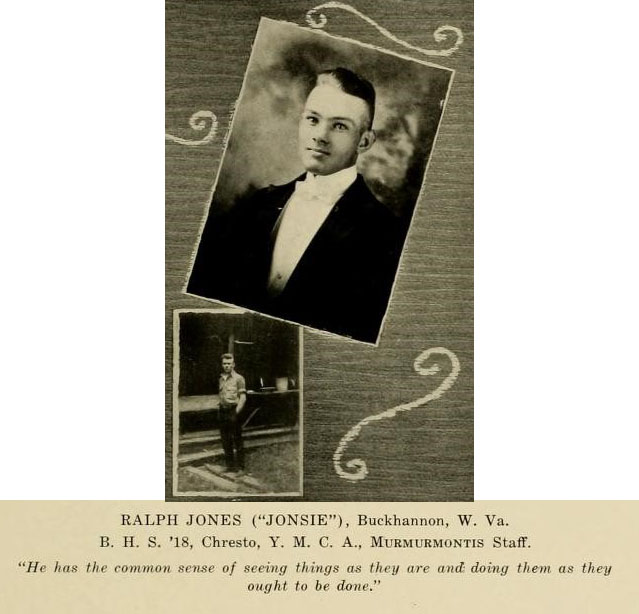 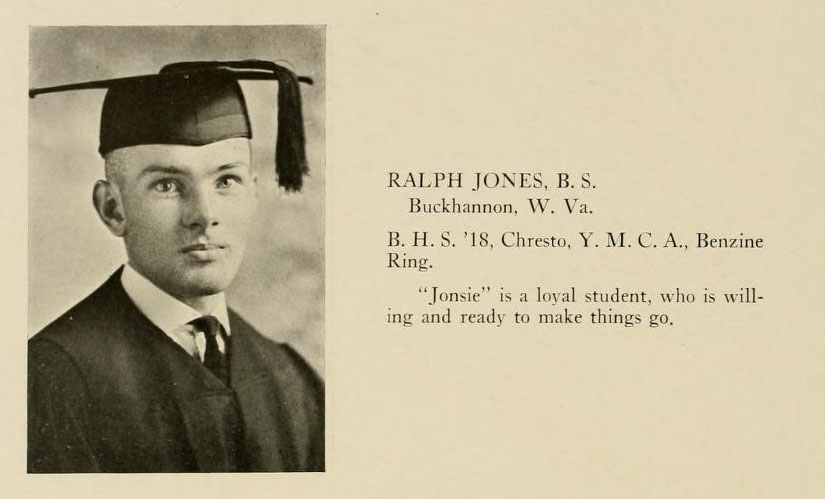 Now that we have a little more information on Ralph, what was SATC? I had never heard of it before, but I assumed it was something like the ROTC.  It turns out that I was close, but it’s a little more complex than that. Thankfully, the Murmurmontis anticipated my question almost 100 years ago. In the 1920 volume, page 115-116, the SATC is described as follows: 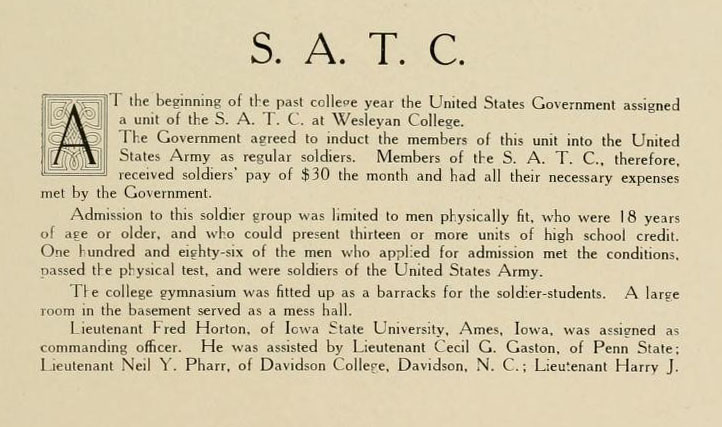 At the beginning of the past college year the United States Government assigned a unit of the S. A. T. C. at Wesleyan College.

The Government agreed to induct the members of this unit into the United States Army as regular soldiers. Members of the S. A. T. C., therefore, received soldiers’ pay of $30 the month and had all their necessary expenses met by the Government.

Admission to this soldier group was limited to men physically fit, who were 18 years of age or older, and who could present thirteen or more units of high school credit. One hundred and eighty-six of the men who applied for admission met the conditions, passed the physical test, and were soldiers of the United States Army.

The college gymnasium was fitted up as a barracks for the soldier-students. A large room in the basement served as a mess hall.

On the 21st day of December [1918] the men were discharged, and it was a jolly crowd of young fellows who arrived home in time for Christmas, conscious that they had done their duty for their country.

You can read more about the purpose of the SATC in the October 7, 1918 issue of The Pharos, which WV Wesleyan has made available digitally here: http://cdm16111.contentdm.oclc.org/cdm/compoundobject/collection/p271901coll13/id/7243/rec/5.

The purpose of the S. A. T. C. is to secure officer material and at the same time to allow the student to continue his school work…The first quarter will probably end about December 21st, and it is then that the first transfers from here will be made. Men will be transferred to Officers’ Training Corps, to Non-Commissioned Officers Training Camps, to Vocational Schools and to Line Regiments for active duty.

Since these men were under 21, the SATC would have made them more prepared to serve in the event that they were drafted after turning 21, the youngest age eligible for conscription at that time.  The end of hostilities removed the pressing need for the SATC.  The December 15, 1918 issue of The Pharos tells us that the War Department decided to disband the SATC by the end of the term, and that many of the SATC members had indicated their desire to continue studying at WV Wesleyan.

In case you think that WV Wesleyan was alone in helping train West Virginians as soldiers for America’s military, William T. Doherty, Jr. tells us in his West Virginia’s University that WVU, Bethany College, and Davis & Elkins College also had SATC programs. To see images from WVU’s SATC and their training, check out this link: http://wvhistoryonview.org/?f%5Bcorpnames_sim%5D%5B%5D=United+States.+Army.+Students%27+Army+Training+Corps.&search_field=all_fields

After Ralph’s time with the SATC, the 1920 and 1930 censuses list him as living with his parents in Buckhannon, working as a clerk in a bookstore. He went on to less book-oriented things, as you can see in his obituary from the June 14, 1973 issue of the Nicholas Chronicle, available on microfilm in the Center.  I’m glad that a little piece of the history of this well-liked West Virginian resides in our archives. 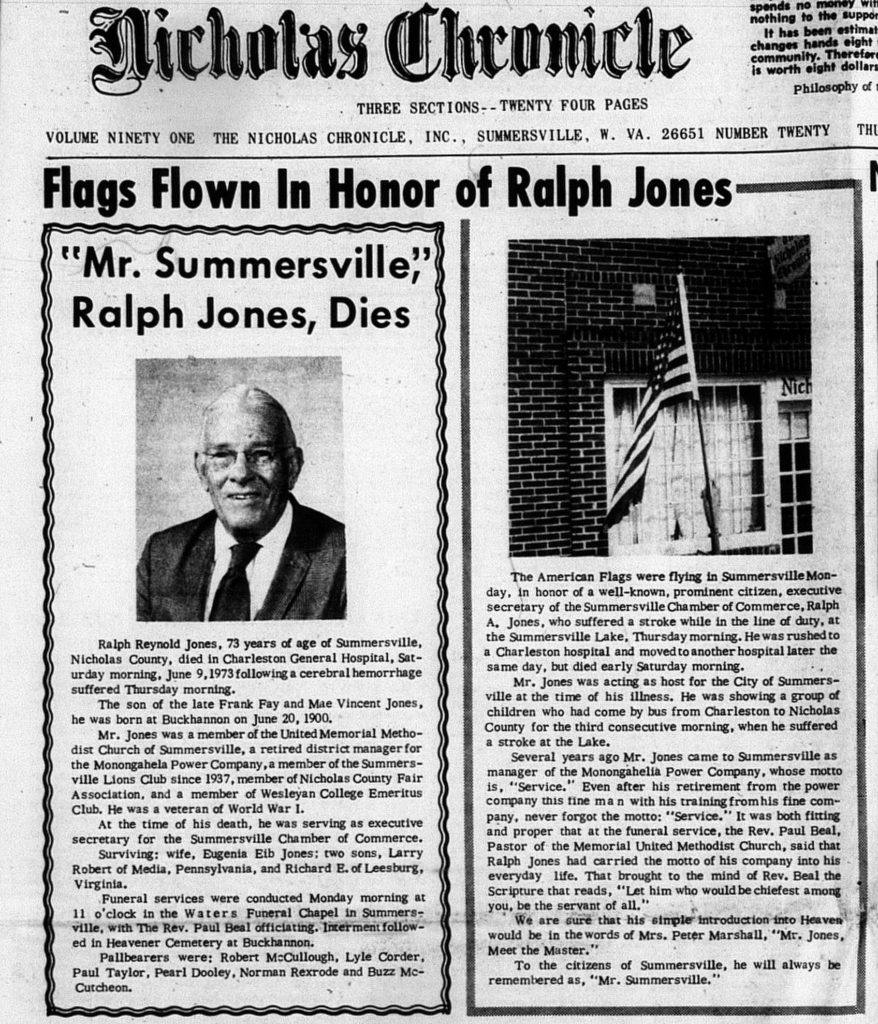 If you want more information on SATC rules and regulations, check out the “Special Regulations No. 103” booklet available here:  https://archive.org/details/studentsarmytrai00unit.  To learn more about the SATC at WVU, check out pages 76-80 of Kenneth P. Stites’ A History of Military Training at West Virginia University (1935), which includes Dr. L. D. Arnett’s “University in the War” (1925).