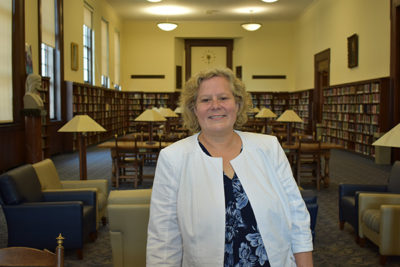 West Virginia University’s associate dean of Libraries, Karen Diaz, has been appointed interim dean of Libraries effective July 31. Diaz steps into the role following the departure of Dean Jon Cawthorne, who left for a position at Wayne State University.

“Having been a professional librarian in higher education for 30 years, Karen obviously has tremendous experience,” said Provost Joyce McConnell. “She also has a clear understanding of how university libraries like ours need to redefine their role and the nature of their collections in the 21st century. I know that under her leadership, our talented library staff will flourish and our libraries will grow as extraordinary campus resources.”

Diaz joined the WVU Libraries in January 2016. As associate dean, she has worked with department heads to meet the needs of the Libraries’ various departments. Diaz has also initiated efforts to meet the challenges of a growing a 21st century research library and has worked to bring two Open Access initiatives to fruition. Additionally, she has introduced a new “engaged librarian” model and created cross-functional teams within the libraries.

“I’m excited for the opportunity to continue the many initiatives begun at the WVU Libraries by Dean Cawthorne,” Diaz said. “Just like higher education in general, academic libraries are in a time of great change and so there is much opportunity before us. I am honored to work with the campus, the library staff and our many partners across the state and nation to make this the best library for WVU at this time.”

Diaz’s interim appointment will extend into the 2018-2019 academic year. McConnell said that the University will likely conduct a national search for a new dean in fall 2018.