Looking Back (and Up) at Spruce Knob

Spruce Knob is West Virginia’s highest point and one of my favorite places. Located in Pendleton County, the Knob, the summit of Spruce Mountain, stands 4,861 feet above sea level.  The mountain takes its name from the growth of Red Spruce trees.  At Spruce Knob, many of these trees grow one-sided or in a flag shape due to high winds. 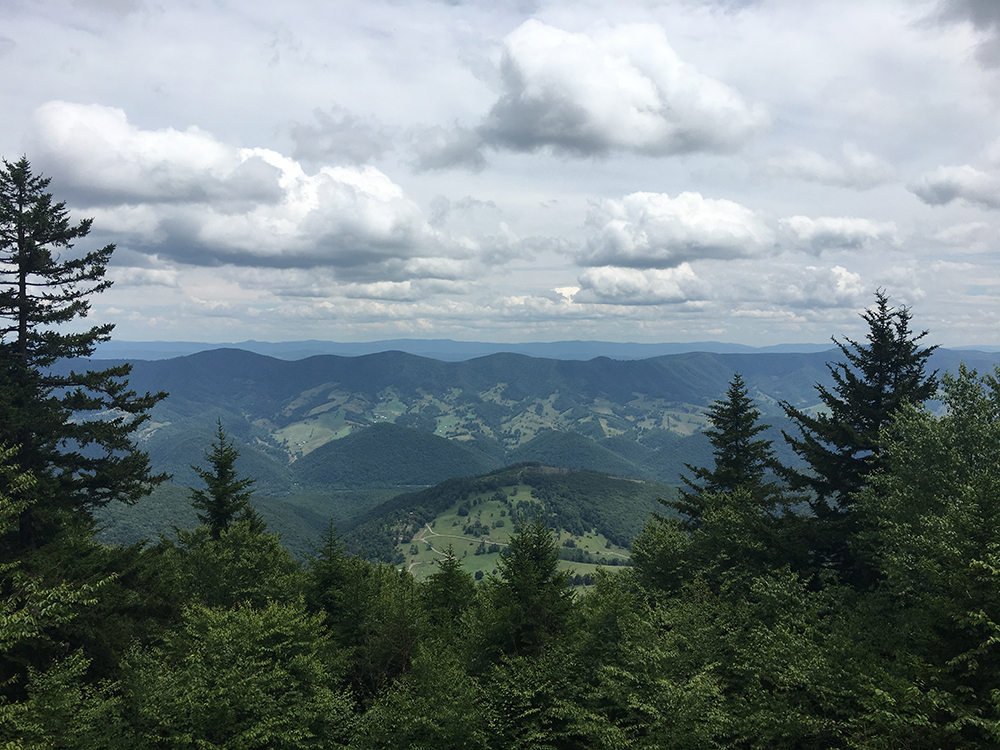 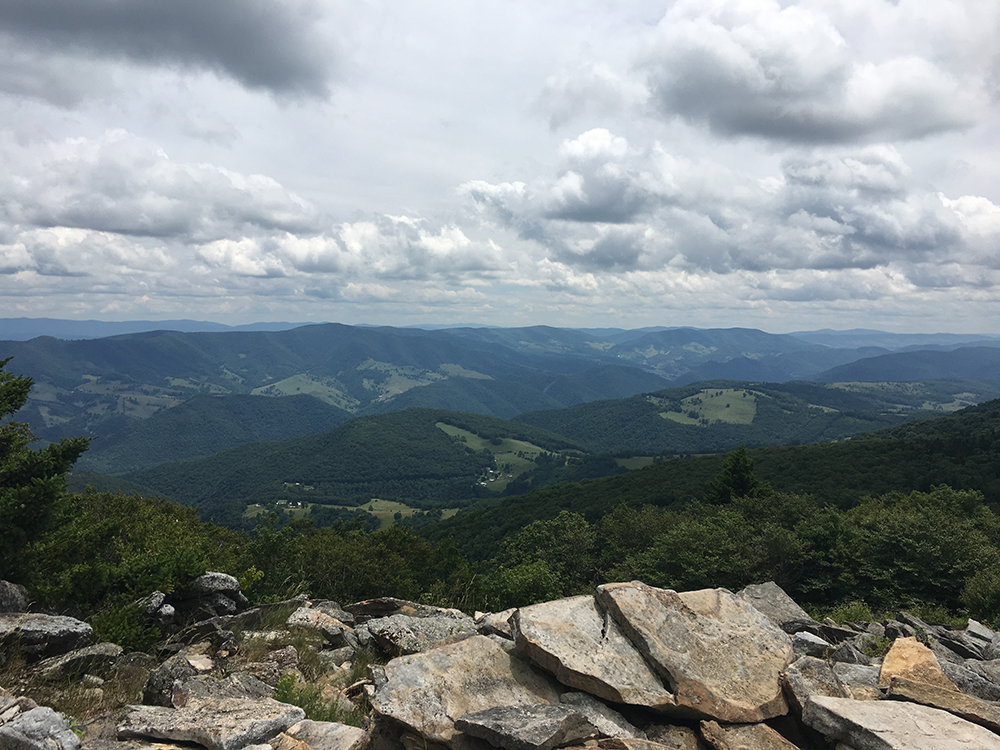 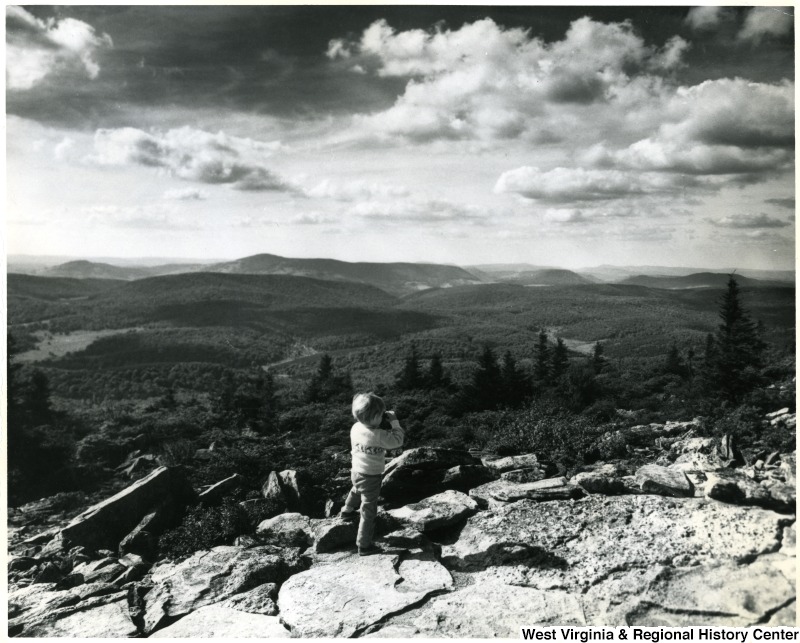 The resources and collections at the West Virginia & Regional History Center shed light on the history of Spruce Knob and the surrounding area.  Norma Venable’s short book, Sentinels in the Sky: Seneca Rocks & Spruce Knob provides a nice overview of the two West Virginia landmarks.  According to Venable, early settlers burned thousands of acres of land on Spruce Mountain to create pasture for livestock.  Timbering was the main industry in the area at the turn of the century and the last stand of old growth timber was cut down in the late 1920s. Forest fires were frequent, so much so that local residents called the Knob, “Big Burn.” 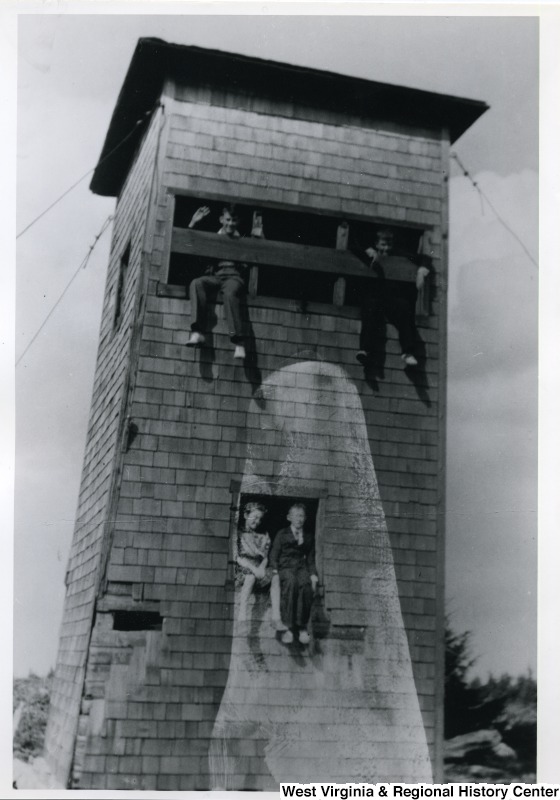 In 1921, Spruce Knob was acquired by the U.S. Forest Service as part of the Monongahela National Forest and since then it has been fire free. Travel to the area was greatly enhanced when a road was built across Spruce Mountain in 1936 but it was not until 1960 that a spur road ran all the way to the top. 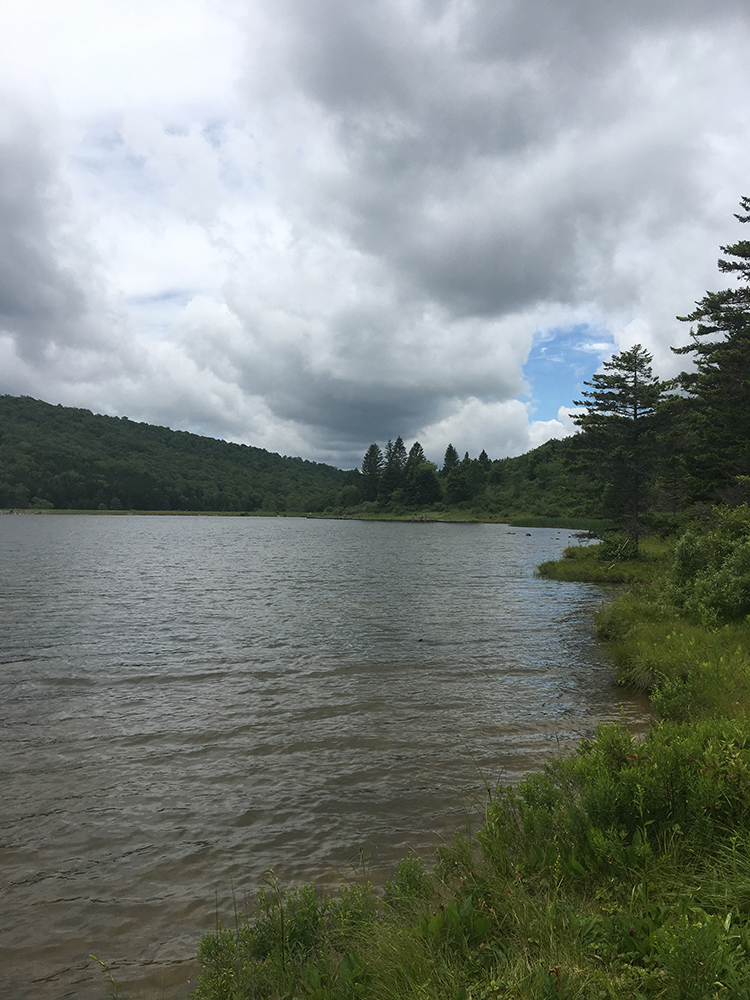 A partial view of nearby Spruce Knob Lake, July 2017, photo by Lori Hostuttler.

Spruce Knob Lake is only a short drive from the summit.  The lake was constructed in 1952 for fishing and is still regularly stocked.  The 25 acre lake is the highest in the state at 3,840 feet. 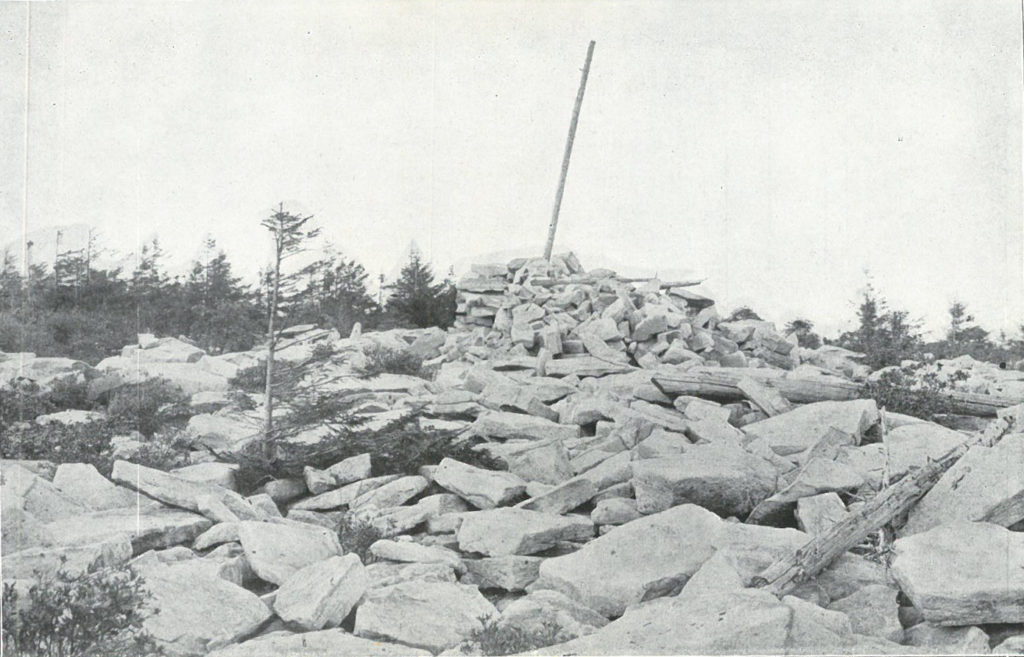 Conservationist and educator A. B. Brooks described Spruce Knob in the West Virginia Geological Survey in 1910.  He observed that “the crest of the mountain varies in width from one fourth to one half mile and is everywhere strewn with seamed and broken fragments of sandstone.” Brooks also provided detailed lists of plants and animals that could be found on the Knob at that time.  The most common trees were Red Spruce, but Yellow Pines and Mountain Ash trees were also plentiful.  Black Huckleberry, Wintergreen, Trailing Arbutus, Mountain Cranberry, Black Chokeberry, Red Raspberry, Yellow Clintonia, and Running Pine were also quite common.  Bracken Fern was then “the most abundant plant in the region covering thousands of acres of burnt lands.”  Black bears, red foxes, varying hares, and red squirrels frequented the area. They were accompanied by birds such as the Veery Thrush, Olive Backed Thrush, Gold Crowned Kinglet, Windsor Wren, and the Magnolia Warbler. 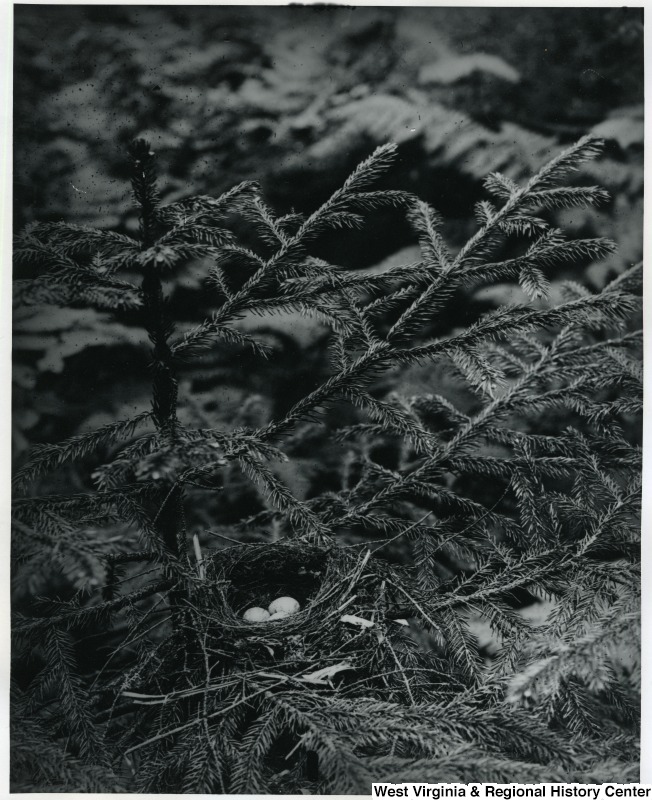 Fifty years later in 1960, William C. Robinson revisited Brook’s survey of vegetation on Spruce Knob in Castanea: The Journal of the Southern Appalachian Botanical Society.  He noted that the most significant changes during that time were the increase in the number of Red Spruce trees, the establishment of Red Maple trees in the area, the appearance of new shrubs and herbaceous species, as well as the disappearance of several shrubs that were common in the earlier survey. 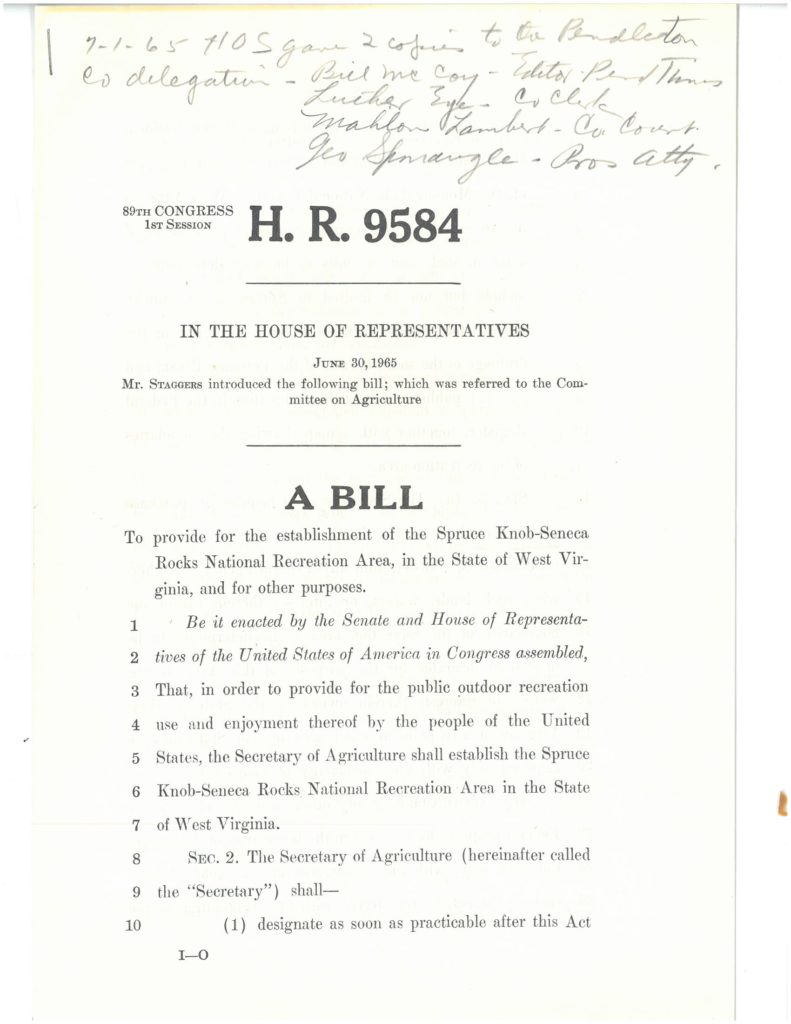 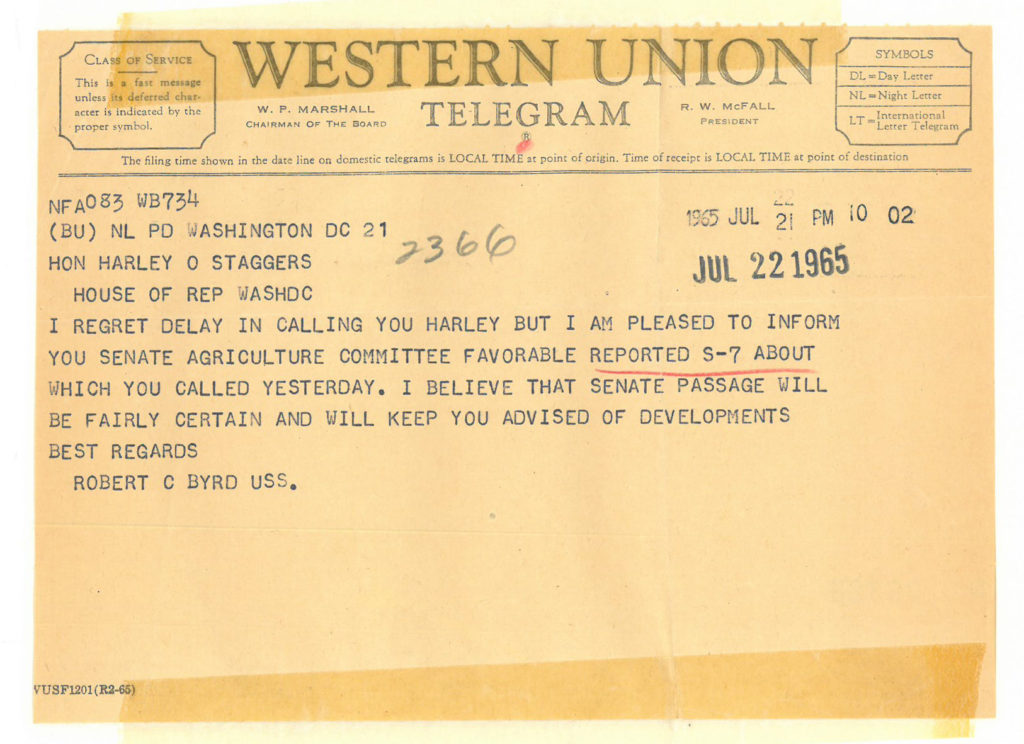 A telegram from West Virginia Senator Robert C. Byrd to Congressman Staggers indicating that his bill would pass. 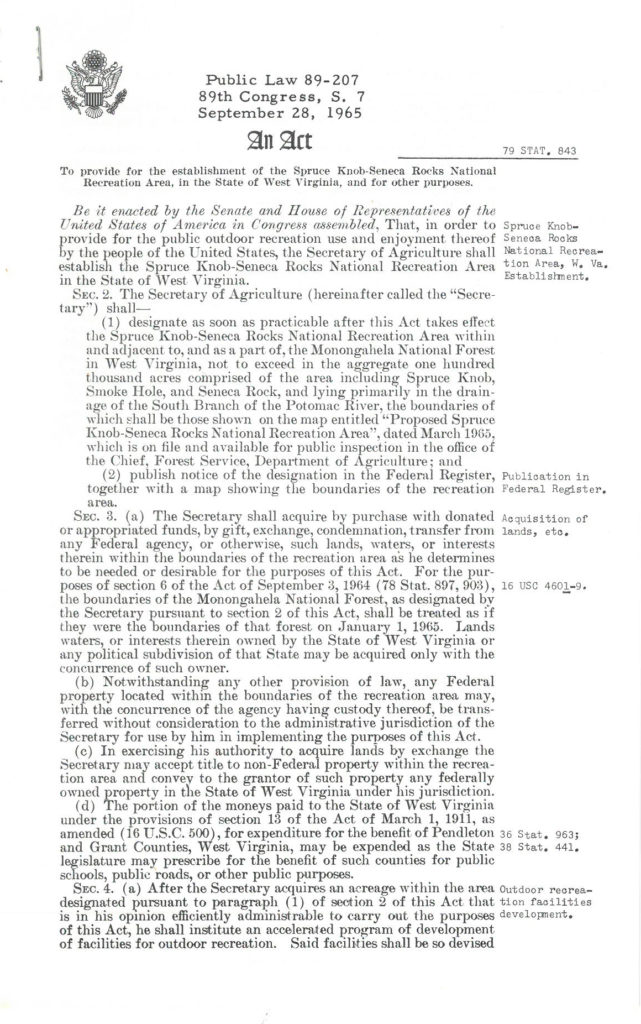 “To the purchaser of coal or oil, to the farmer or even to the lumberman, Spruce Mountain offers little or nothing.  But to the lover of mountain air and mountain scenery, to the student of nature and the collector it offers much and possesses for these a peculiar interest and charm.”

Spruce Knob has certainly charmed me over the years with its spectacular views, but this was the first time I reviewed our holdings to see what materials were available to document West Virginia’s highest point.  I only included a sampling of related books, photos, and manuscripts in this post.  I am very pleased that the rich history and changing ecology of the area are well documented at the West Virginia & Regional History Center.

One Response to 'Looking Back (and Up) at Spruce Knob'