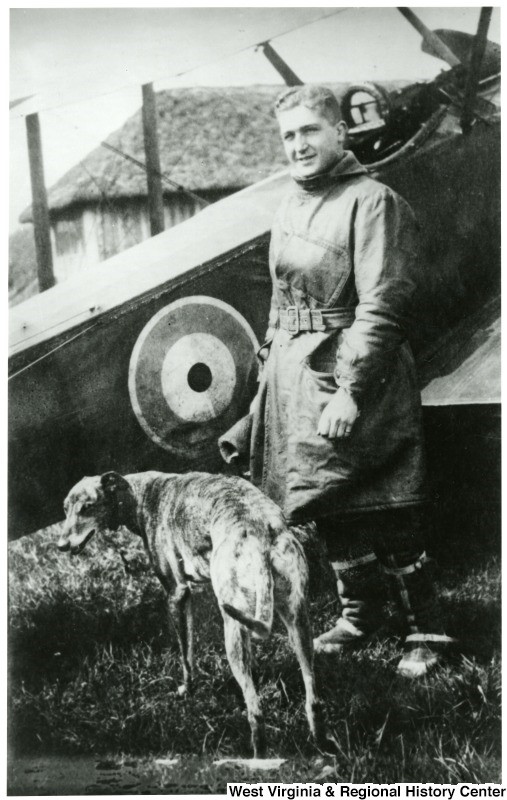 Lt. Louis Bennett, Jr. and his dog standing in front of a SE5a biplane

This year, 2017, marks the 100th anniversary of America’s entry into World War I.  While war had raged in Europe since 1914, President Woodrow Wilson was making every effort to keep America from committing soldiers and joining the war effort.  However, the tide turned in support of the war and America joined forces with Europe in April 1917.   Following that declaration, the U.S. then declared war on Austria-Hungary in December with troops arriving on the Western Front the following year, 1918.

While at Yale, Bennett began to envisage a West Virginia Flying Corps.  He left Yale briefly to return to West Virginia in order to put his idea for a flying corps into practice.  Once back in his home state, Bennett pursued his dream, fully developing a flying corps and situating it in Beech Bottom, a small town in Brooke County near Weirton.  Bennett established the corps with a full complement of pilots, crew and its own airfield.  With the attention of the governor, Bennett received a commission as the unit’s captain. 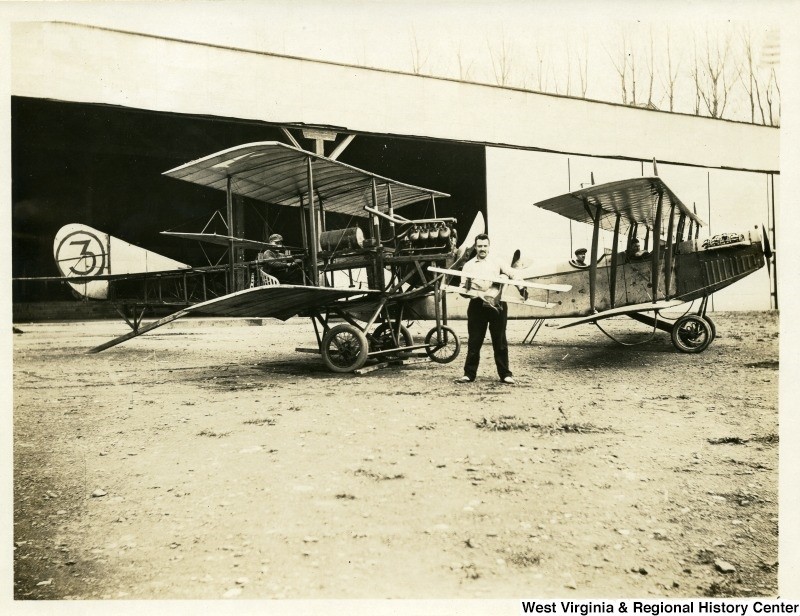 This endeavor met with both success, when the governor provided funding for the corps on July 26, 1917, and failure, following the Army’s refusal to accept the WVFC as a military unit.  Despite this disappointment, Bennett was still eager to fly.  He returned to Yale, graduating in 1917, then in October of that year he headed to Canada to enroll in Flight School.  There he joined the British Royal Air Force as a pilot.

Bennett was a born flying ace.  He was assigned to the No. 40 Squadron, RAF, and sent to France.  He developed great skill in shooting down observation balloons, whose use was critical in WWI.  Balloons, in the form of dirigibles, were able to be sent up to great heights in order to observe and locate military operations in advance, relaying locations to military intelligence for targeting.  Balloons of this nature were deployed all over the Western Front.  Bennett had developed the talent and the skills necessary for their destruction.

Bennett flew a SE5a biplane, the successor to the well-known Sopwith Camel, designed for the RAF and used during WWI.  Bennett’s time in service was short, a mere nine days, in which he flew twenty five missions against the Germans.  During this brief tenure he took out nine enemy balloons.  The crucial importance of balloon observation during the war led to a strong land defense from anti-aircraft guns.  On his final mission, August 24, 1918, Bennett’s biplane was shot down, but not until after he had destroyed two more balloons.    Bennett crashed when his wooden biplane was hit and burst into flames.  Although he was pulled from the wreckage, Bennett suffered severe burns and died shortly afterwards.  He was twenty-three years old when he died on the Western Front.

Bennett received a posthumous recommendation for the Distinguished Flying Cross, though it was never awarded.  His courageous acts live on today in the large number of memorials dedicated to him, both in the United States and abroad.  Devastated by the death of her only son, Sallie Bennett dedicated her life to memorializing her son.  Saint Martin’s Church, a chapel in Wavrin, France near the site of the crash, suffered during the war and was rebuilt by her in his honor.  Bennett had been buried in France, but the grieving mother had his body brought home to be buried in Machpelah Cemetery in Weston where a monument marks his grave, shown below.  Mrs. Bennett also commissioned a monument called “The Aviator,” sculpted by Augustus Lukeman, a sculptor known for his historical monuments.  The monument stands today at The Linsly School located in Wheeling, which was a military academy for young boys at the time of Bennett’s death. 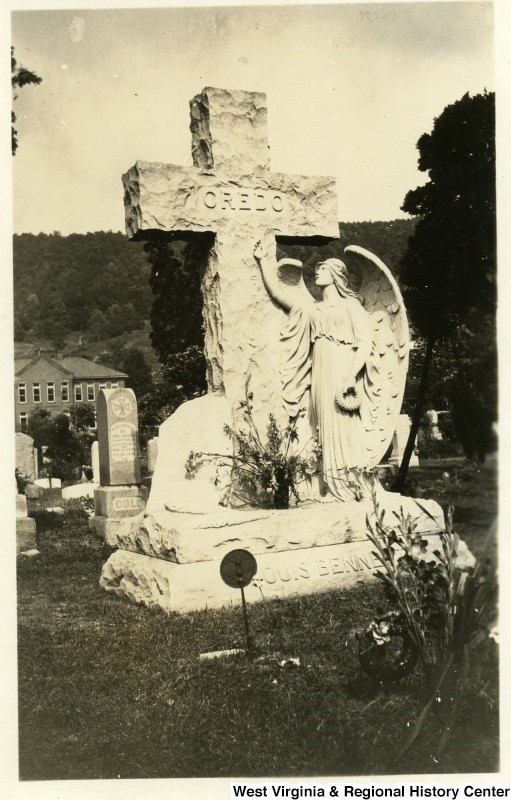 Among the memorials Mrs. Bennett dedicated to her son is a stained glass window, shown below, which can be seen to this day in Westminster Abbey, London.  The window was created by the artist Harry Grylls, which includes St. Michael, the patron saint of airmen.  Grylls included a portrait of Bennett in the face of the angel holding the shield.  The badge of the West Virginia Flying Corps, including the WV State seal, can be seen in the lower right corner of the window. 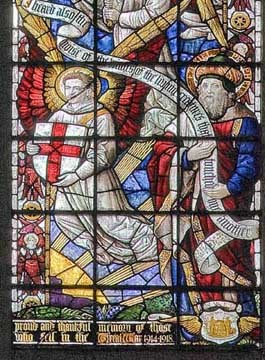 In a final act of remembrance, Mrs. Bennett gave her home to the town of Weston to serve as the Lewis County War Memorial and the Louis Bennett, Jr. Public Library. 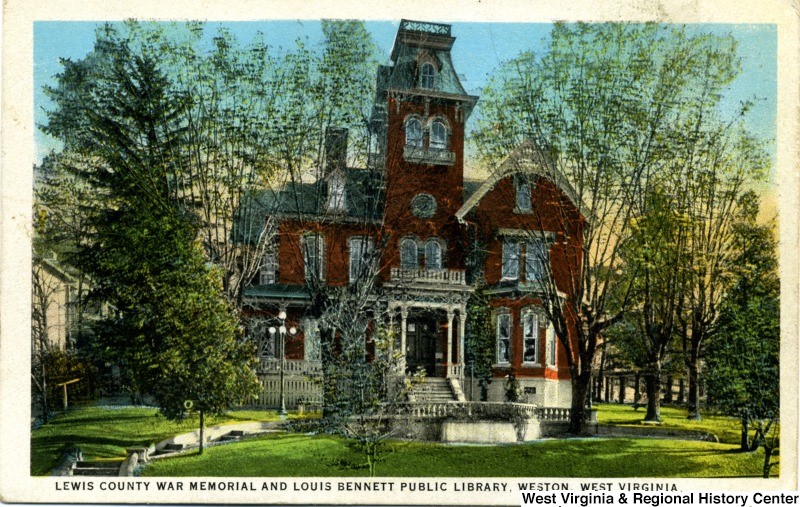 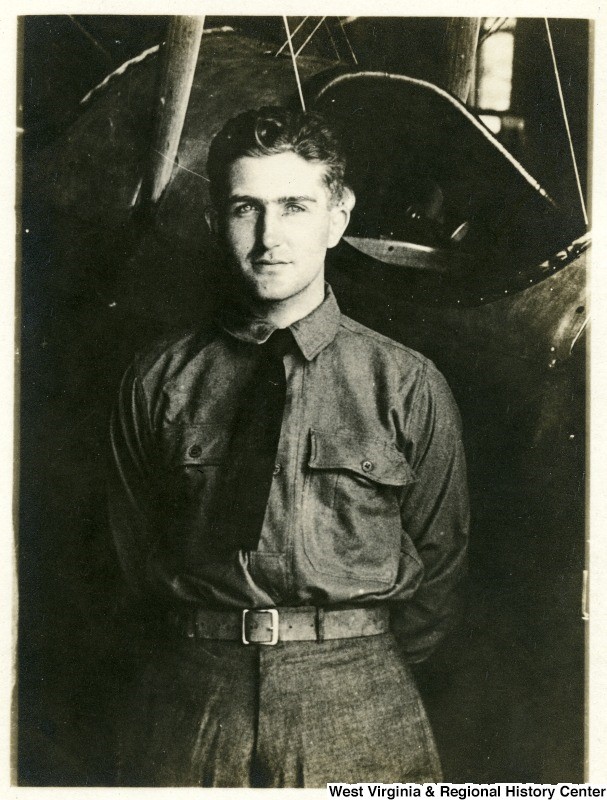 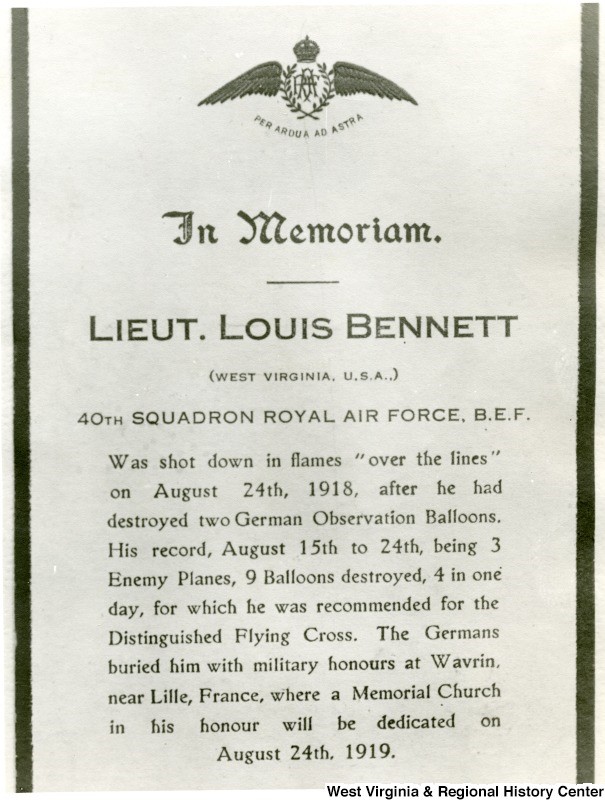 Watch a video of a vintage SE5a biplane, like the one Louis Bennett flew in WWI, on YouTube:  https://www.youtube.com/watch?v=Nl8R6q9zhTc