West Virginia and the Vietnam War

Blog Post by Catherine Rakowski, Administrative Associate at the WVRHC

The United States’ involvement in Vietnam (also known as French Indochina) began as early as 1950 in an effort to contain the spread of communism.  Throughout the next 25 years, the American support for the anti-communist government of South Vietnam escalated from supplying funding, military advisors and equipment to a full-scale involvement of U.S. forces fighting the war.

By the end of America’s most controversial war in 1975, more than 3 million Americans had served and 58,220 had died.  The state of West Virginia sent 36,578 troops of which 1,182 died. West Virginia suffered the highest casualty rate in the nation.

The West Virginia and Regional History Center is now displaying through December 2017, in the Rockefeller Gallery (2nd floor of the Wise Library) the exhibit, “West Virginia and the Vietnam War.” It includes political papers, maps, photographs, correspondence, artifacts, ephemera and the stories of individuals involved in the war on the front lines and at home. The photographs in this blog are from that exhibit.

The display case pictured below contains: A map of Saigon, the capital of South Vietnam, ca. 1965; a 1965 photograph of West Virginia Congressman Arch Moore with General William C. Westmoreland, Commander of U.S. forces in Vietnam, 1964-1968; a topographical map of the Indochina Area, ca. 1965. 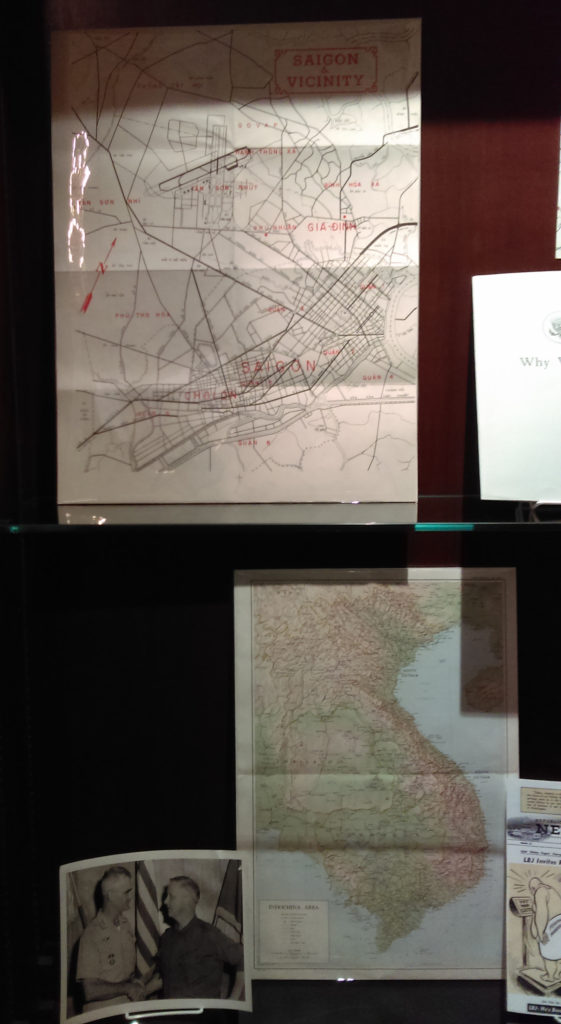 The case pictured below includes photographs, maps, and reports regarding the Unites States congressional delegation sent to Vietnam in November 1965. Among the delegates was Rep. Arch Moore from West Virginia. During their visit the group came under sniper fire from the Viet Cong, a communist guerrilla force embedded in the south.  The location where the delegation received the sniper fire is marked in red on the map. 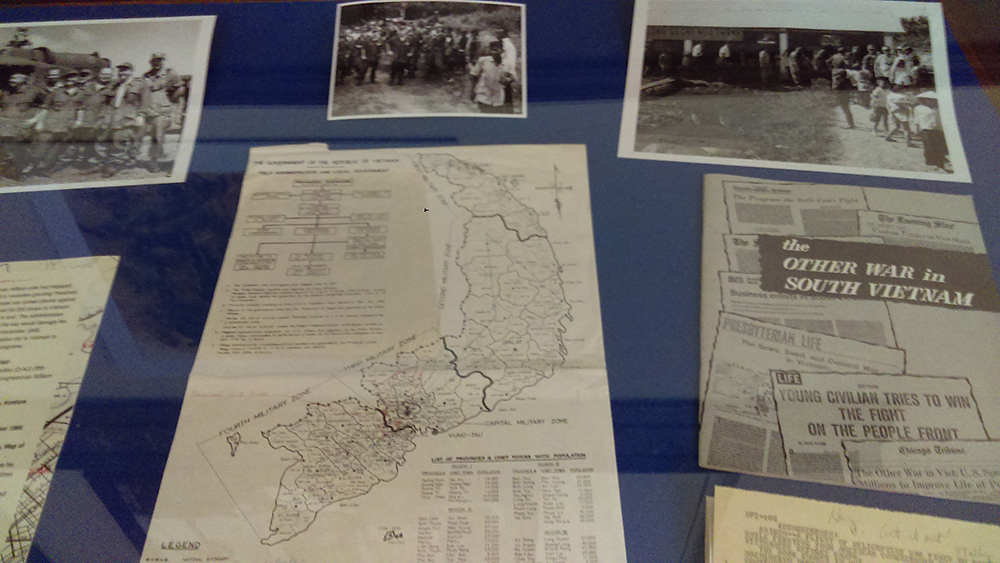 (From the Arch C. Moore Papers at WVRHC, WVU Libraries)

Below are pictured display cases containing several items loaned to the West Virginia & Regional History Center by Paul Casto from his tour of duty with the Marines.  Among the items are several letters to his family; photographs taken in Vietnam and a portrait of Paul Casto in his “greens”; a “Souvenir from Vietnam” album given to the military personnel; Casto’s combat helmet; and his medals. 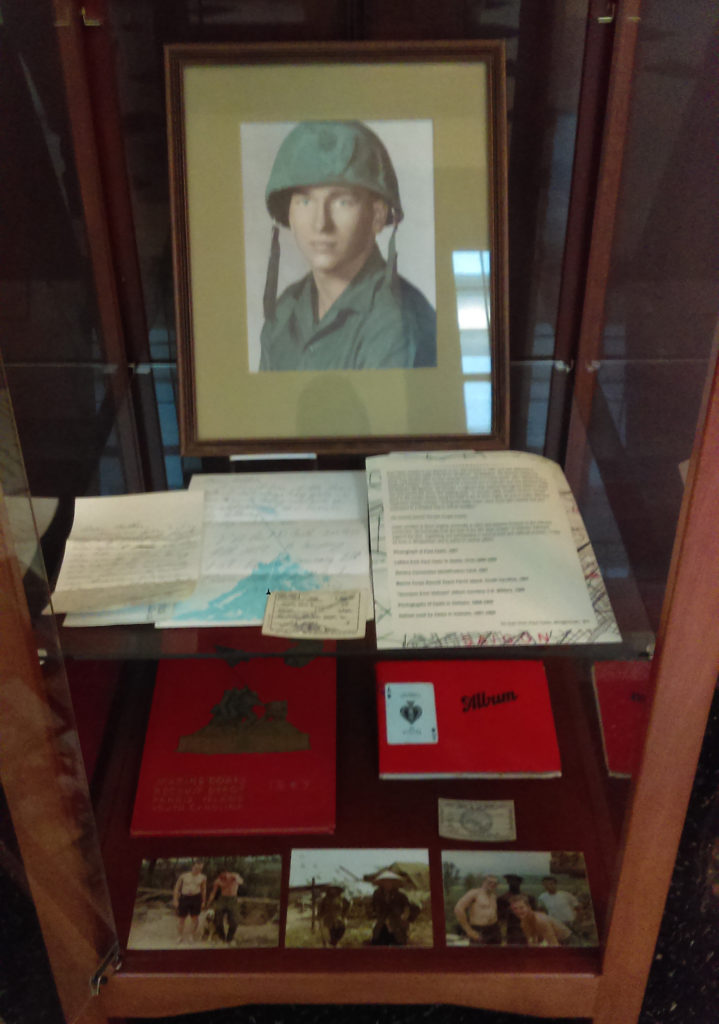 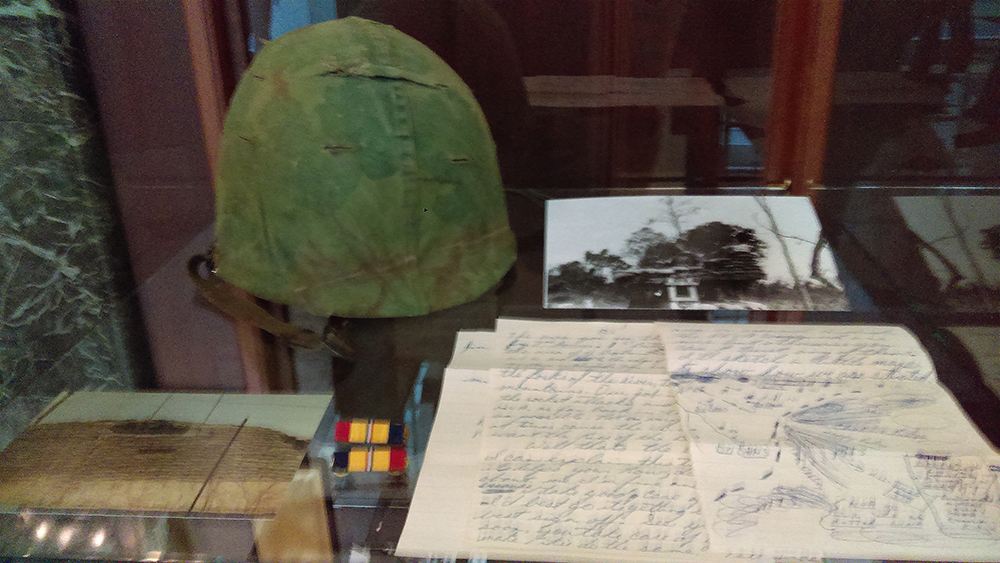 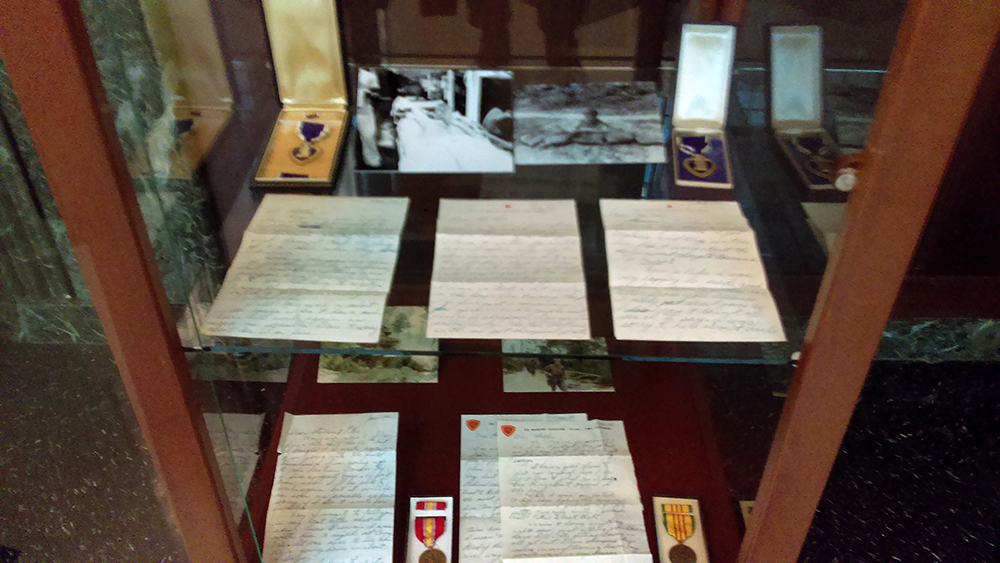 Paul Casto enlisted in the Marines on his 18th birthday in 1967 and was deployed to Vietnam in January 1968, attached to B Co. 60 Mortar, 1st Battalion, 7th Marines outside Da Nang. Five months later he was severely wound in a rocket attack. After release from a stateside hospital, Casto volunteered for a second tour in Vietnam and was attached to the 1st Battalion 9th Marines, 3rd Division. The 1/9 suffered the highest killed in action rate and earned the nickname, “The Walking Dead.”  In January 1969, Casto’s division was engaged in a major offensive along the DMZ in the A Shau Valley, “Operation Dewey Canyon.” During the battle Casto came down with malaria and was evacuated to a hospital ship in critical condition. His service earned him two Purple Hearts.

After being discharged, Casto enrolled at West Virginia University in 1970 and became involved in the anti-war movement. He eventually took the lead of the WV state chapter of “Vietnam Veterans Against the War”, organizing and participating in several local and national protests. Today he lives in Morgantown and is active in veteran affairs.

The image below, of items in the wall case, includes several anti-war broadsides, ephemera, newspapers and flyers. Most are on loan from Paul Casto. 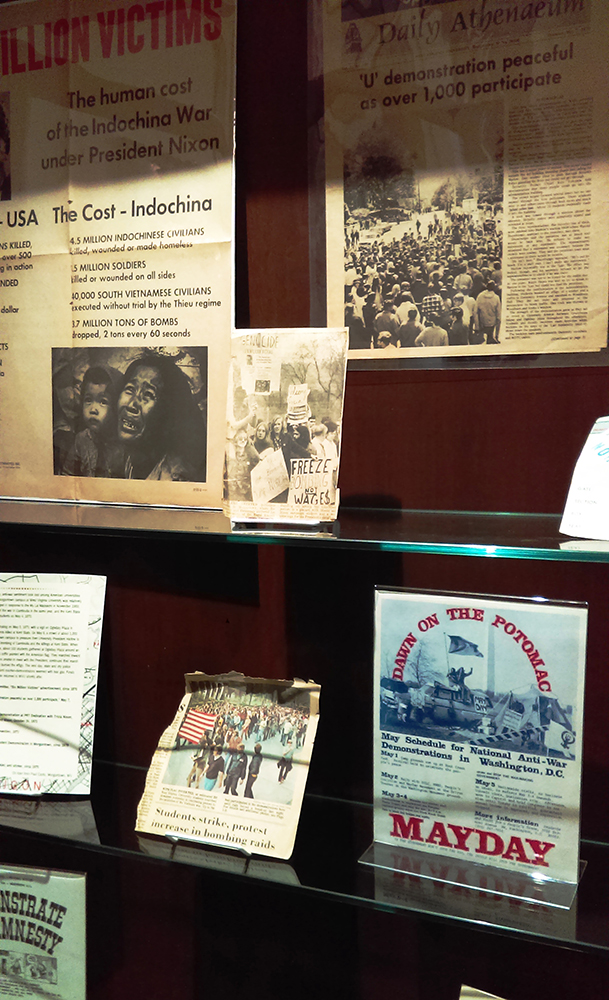 Several American men sought ways to stay out of the military during the war. Tom Bennett, a 1965 Morgantown High graduate, found a way to serve while also honoring his strong convictions against taking a life.

After losing his draft deferment when he was placed on academic probation at WVU, Bennett chose not to shirk what he felt was his patriotic duty and requested classification as a conscientious objector, willing to serve. He was inducted in the Army in 1968 and trained as a medic. Bennett wrote home: “If I am called to Nam I will go. Out of obligation to a country I love I will go and possibly die for a cause I vehemently disagree with.”

In late January 1969 Bennett joined Bravo Co. 1st Battalion 14th Infantry in the Central Highlands of Vietnam. He quickly earned the respect of the other men for his determination to save the lives of others without regard for his own life while under heavy enemy fire. In early February, the men in Tom’s outfit had requested platoon sergeant, James McBee put Bennett for a Silver Star. McBee reported to the Company Captain, “…He’s (Bennett) been doing an outstanding job . . . He took a lot risks to help the guys who got hit. In fact I had to chew him out for taking too many risks.” On February 11, enemy snipers attacked Bravo Co. wounding several. Bennett, ignoring McBee’s order to stay back, jumped out from his cover to aid the wounded and was killed instantly.

On April 7, 1970 President Nixon presented Tom Bennett’s posthumous Medal of Honor to his parents, making him only the second conscientious objector to earn the Medal. 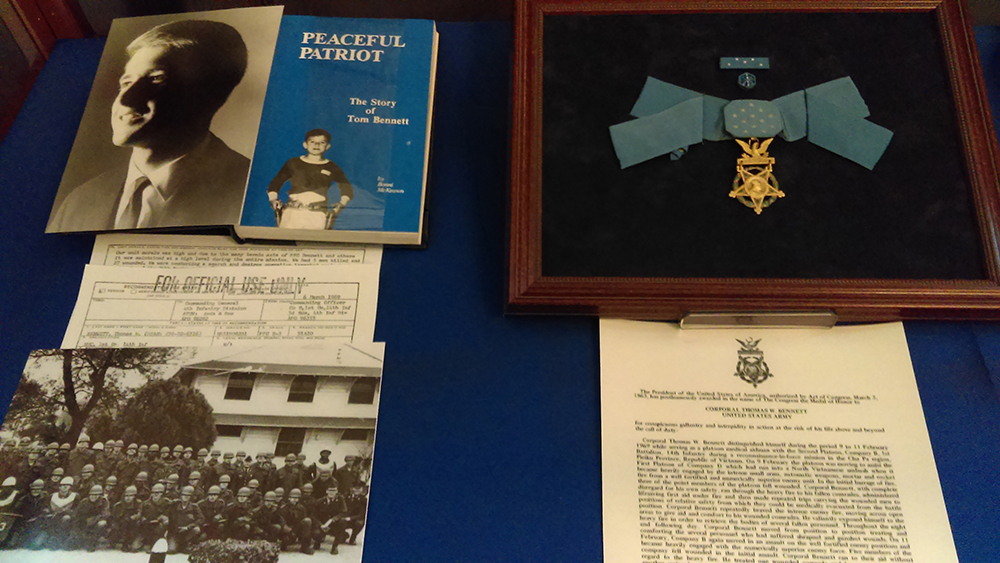 Bennett’s Medal of Honor was donated by his family to West Virginia University. It is displayed in the exhibit along with a copy of a biography by Bonnie McKeown, Peaceful Patriot: The Story of Tom Bennett; a newspaper clipping, “Two Prayers by Tom Bennett” published in the Morgantown Post, and copies of the recommendation for the Medal of Honor.

(From the Thomas Bennett Papers, at WVRHC, WVU Libraries)

One Response to 'West Virginia and the Vietnam War'