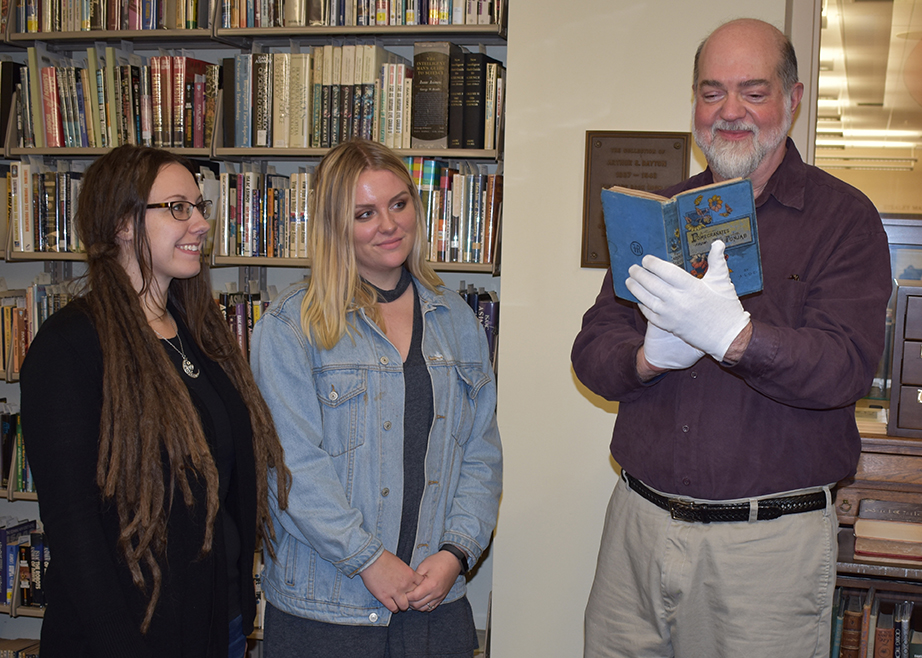 When Harold M. Forbes retired from West Virginia University as curator of Rare Books in 2013, bookseller Jim Presgraves wanted to pay a proper tribute to his colleague’s long career.

Rather than sending a card, Presgraves, approaching retirement himself, donated a large portion of his inventory at Bookworm and Silverfish Books in Rural Retreat, Virginia, to WVU Libraries in honor of the former Rare Books Curator. Library staff calculate the gift at more than 10,000 books, pamphlets, archives, maps and other materials with a value more than $500,000.

“WVU has been a very good customer over the years, and that was my reward,” said Presgraves, who secured books on West Virginia, Appalachia and other topics for Forbes.

As part of his donation, he requested the Libraries identify 100 books and add special bookplates recognizing Forbes. Rare Books Curator Stewart Plein, who worked with Forbes prior to his retirement, selected books she knew would interest him and invited Forbes back to the Rare Book Room in the West Virginia and Regional History Center to unveil the tribute.

“At first, I thought, ‘What a terrific selection’, and then I was stunned to see my name in the books,” Forbes said. “To receive something like this, something so substantial, it was exceptional. I felt truly honored.”

Forbes initially connected with Presgraves through his store catalogs that regularly arrived in the mail. The bookseller quickly developed a sense of the types of materials and the subject matters that Forbes would want to add to the WVRHC’s collections.

“For years, Harold was Mr. West Virginia University. He was the epitome of the University. If I had something I thought they needed to have, I’d contact Harold.”

Presgraves has been buying, selling and appraising books for over 50 years. His customers include national libraries in both hemispheres as well as state libraries across the U.S. and esteemed national collections such as the Smithsonian Institution and the Winterthur Museum.

Most of his donated materials are on the shelves at WVU, but Plein and her team – Melissa Brooks, head of Metadata and Data Services for the Libraries; Autumn Summers, a library associate in Data Services Project Management; and work study student Jamie Rood – are still working to process and catalog all of the books.

“Mr. Presgraves’ donation means so much,” Plein said. “It will enrich our collections in so many areas – the West Virginia Collection, the Appalachia Collection, the Rare Books Collection and our archival collection. We will also add items at Potomac State and WVU Tech.”

This donation was made as part of “A State of Minds: The Campaign for West Virginia University.” The fundraising effort by the WVU Foundation on behalf of the University concluded in December 2017, with donors contributing more than $1.2 billion.