One of the Libraries’ Instagram posts from last month inspired me to research a dog that showed up in a couple of Morgantown fire department photos in our collections. 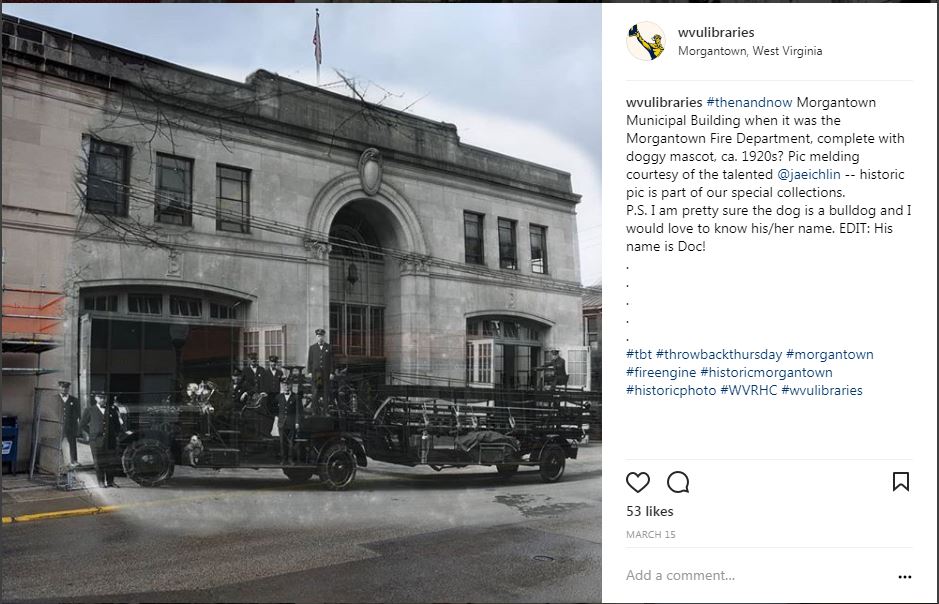 My research took me into the archives at the WVRHC as well as the wonderful historical material kept by the Morgantown Fire Department.  They have captain’s logs, scrapbooks, clippings, photos, and other material that tells the story of the MFD; if any of our readers have research interests about the MFD, you can get in touch with our fire chief, Mark Caravasos. He showed me their collection and gave me more information about Doc the fire dog to fill in the gaps in my research. 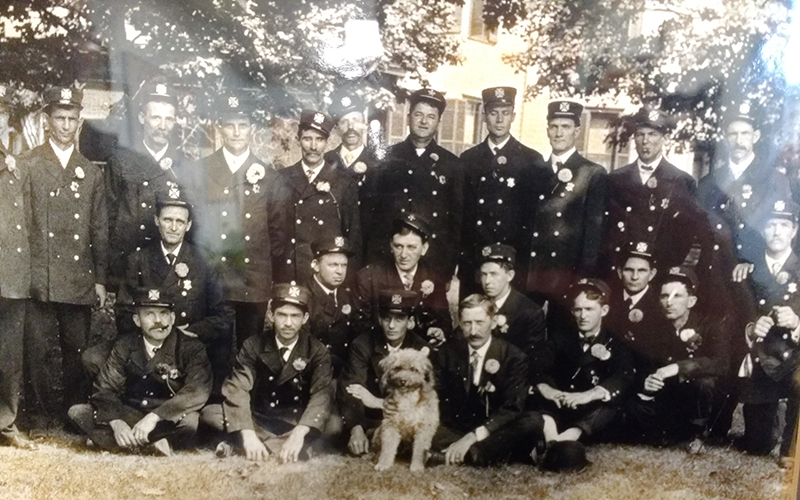 If we want to start at the beginning, we have to go back further than the bulldog I was interested in. Doc may not have been the first fire dog.  The MFD main office has a group portrait, ca. 1915-1920, of the firemen with a different dog in their midst. No word yet on who this very friendly canine was.

At some point, Doc entered the picture as the MFD mascot and fire dog.  Word on his parentage is mixed, but all sources agree he had a military parentage.

One of our photos, and a book about the Morgantown Fire Department, claim that Doc is the son of Jiggs, the bulldog mascot of the Marine Corps (enlisted in 1922 and died in 1927). However, according to a Morgantown Post article from February 23, 1927, Doc was the son of Sergeant Stubby, a mixed breed who was frequently cited as being the most decorated war dog of World War I. 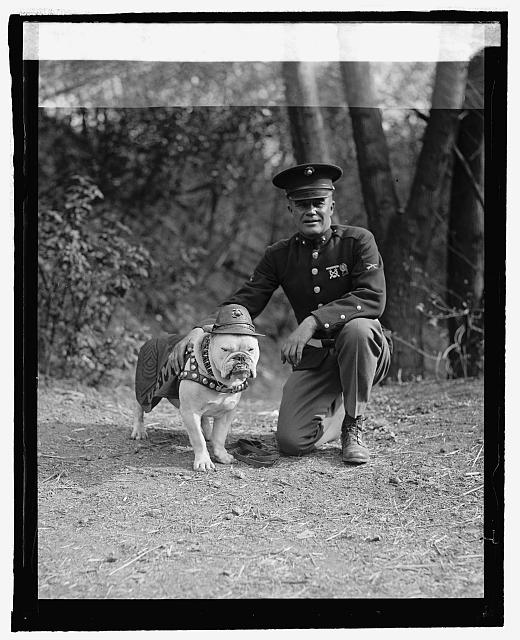 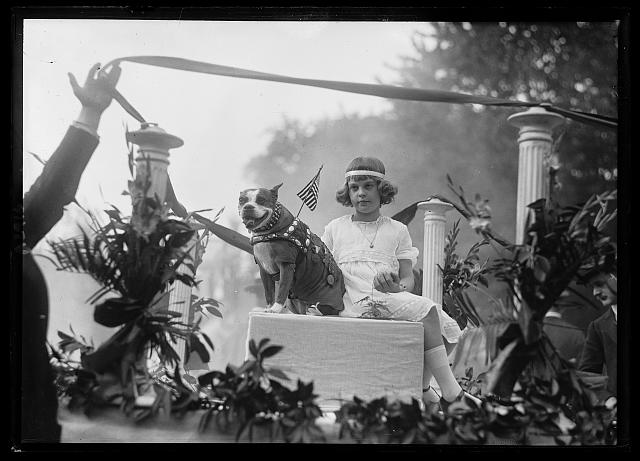 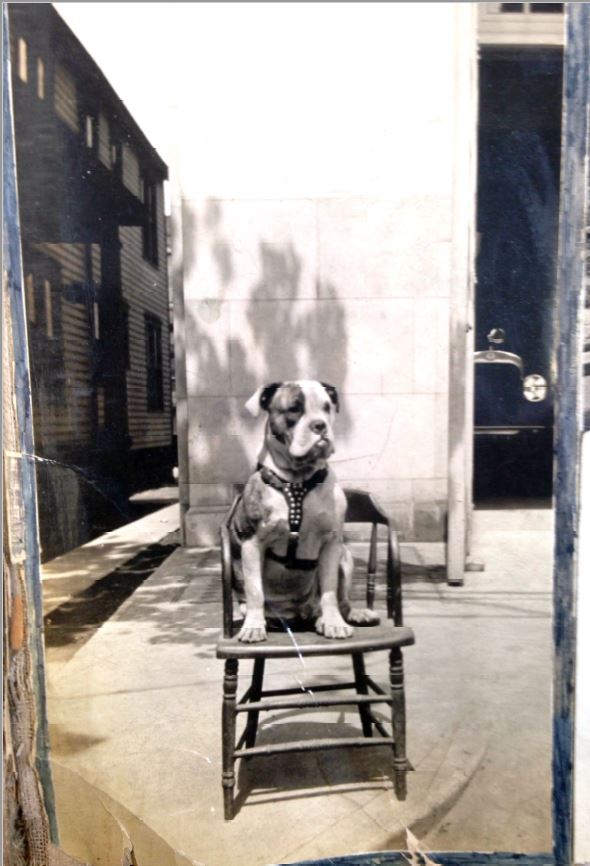 Photos of Jiggs (top, with man), Stubby (middle photo, with girl), and Doc (bottom photo, seated in a chair) for comparison. No info on Doc’s mother is available at this time, but I would guess he has some American Bulldog in him (a breed recognized by the UKC but not the AKC).
Jiggs and Stubby photos are from the Library of Congress; Doc on chair photo is from the MFD collection. 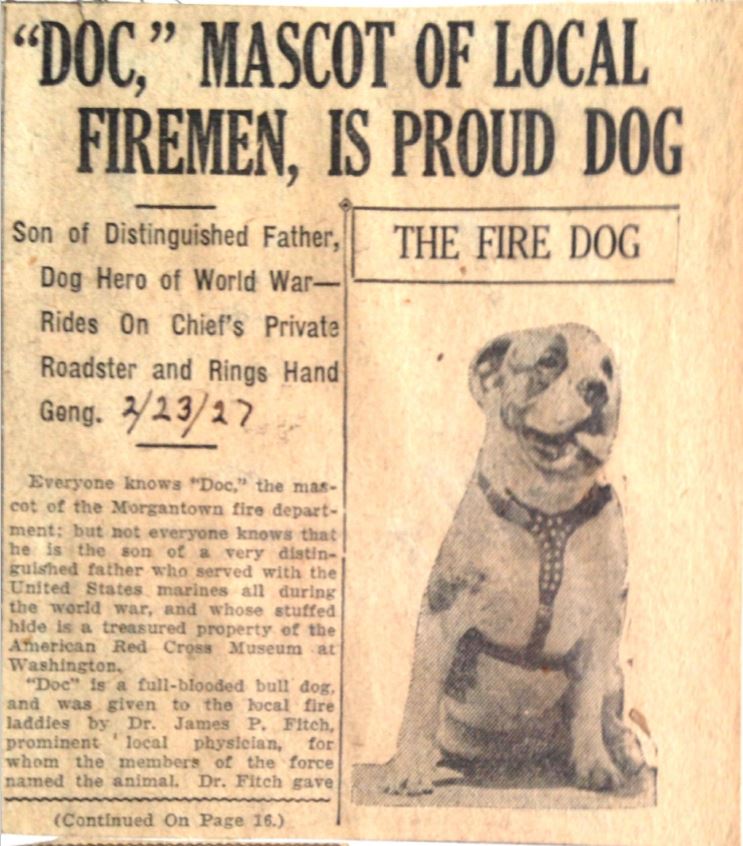 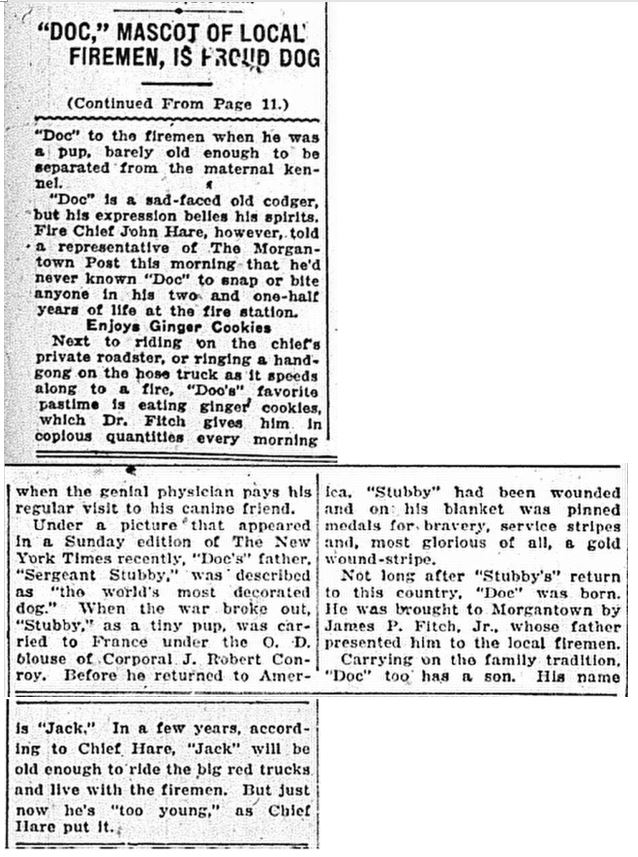 Article from the Morgantown Post, dated February 23, 1927, found in the MFD collection and WVRHC microfilm.
This article was part of a large section of the paper about fire safety and a new film, The Fire Brigade.

According to the Post article, Doc was a full-blooded bulldog given to the fire department by Dr. James P. Fitch, prominent local physician—this was the inspiration for Doc’s name. Doc enjoyed riding in a variety of vehicles and eating ginger cookies. 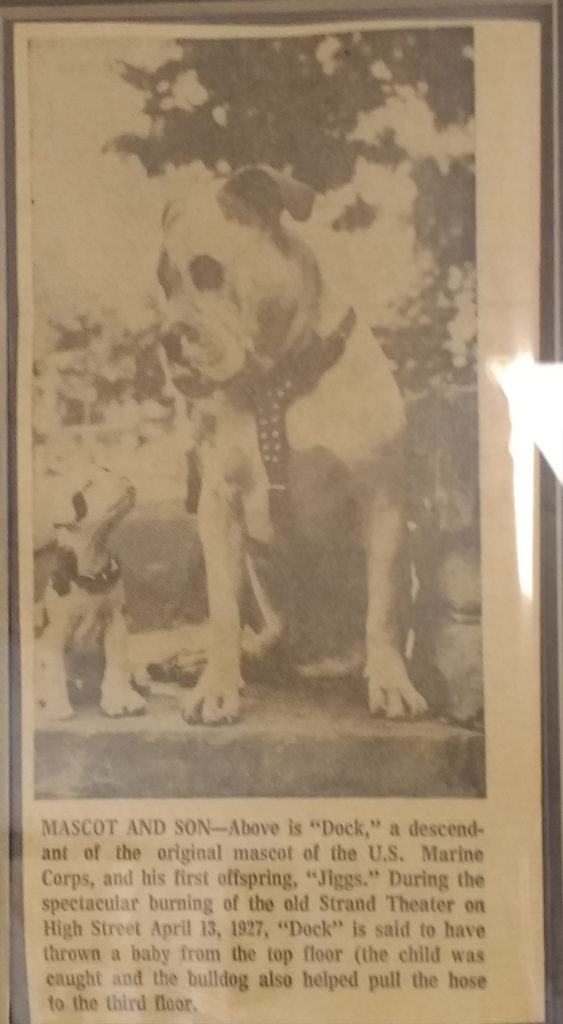 Photo of clipping in the MFD collection, telling Doc’s story of bravery and spelling his name with a K.

Rumor has it that one of Doc’s bravest moments happened during the large fire that occurred in Morgantown in the early morning hours of April 14, 1927.  Four firefighters, McKinney, DeVaughn, Hare, and Feck, were injured fighting the blaze, and units from out of town were called to assist. Apparently, Doc helped firefighters stretch a hose to the third floor and dropped an infant from one of the roofs, into the arms of onlookers below. What a hero! 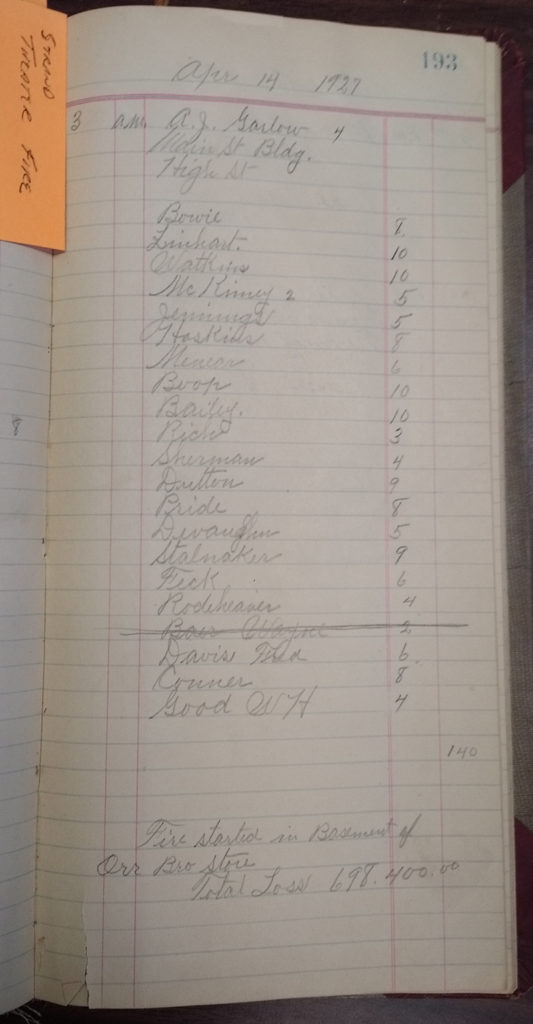 Page from the fire log in the MFD collection, showing details for the Strand Theatre fire of 1927.

In addition to eating ginger cookies and contributing to Morgantown’s fire safety, Doc got out and about.  In the image below, dated 1925, he is in the Cheat Lake area with C.P. Pride, Dick Pride, and Jack Hare—I think C.P. Pride was a firefighter and Jack Hare may have been the son of the Fire Chief at the time, John Hare. 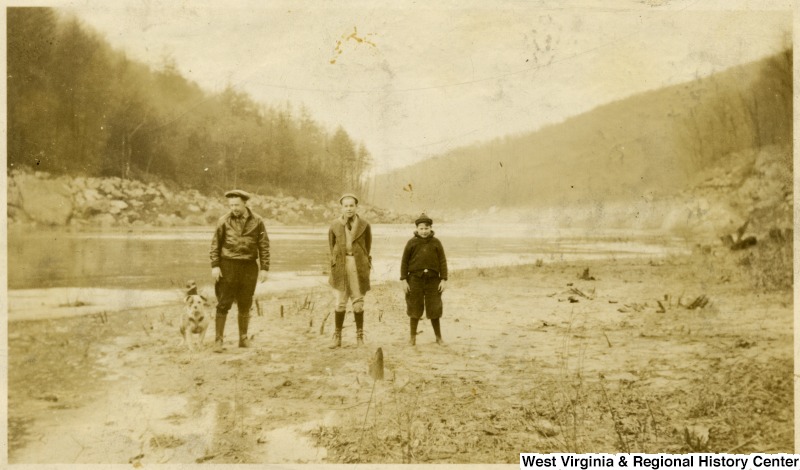 Dogs cannot work forever, and the day came for Doc to retire.  The article above, for which I don’t have a date, tells of the close of his career. My favorite tidbit from this article is this: “’Doc’ always tries to make the truck, though, and has been known to bowl over five or six bystanders when taking the corners in his spectacular last-minute sprints for the truck.” Thankfully, Doc’s son Major was able to take over his fire dog duties. If you were paying attention to the other articles in this post, Doc may also have had sons named Jack and Jiggs. We have photos of him with what I suspect is one of his sons, I’m just not sure which.  It looks like Major was the last of the Morgantown fire dogs. 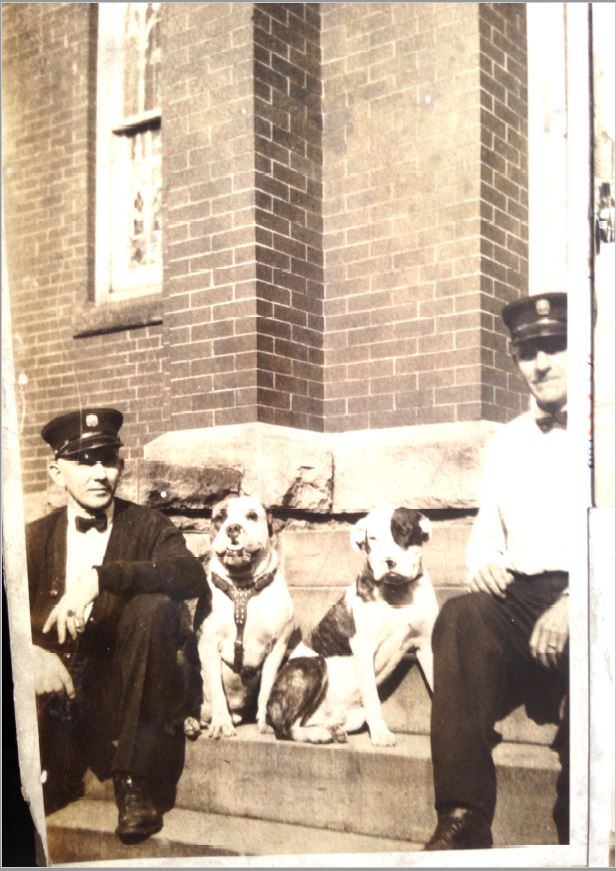 If you compare the second dog in the above photo to the pup in the newspaper article image above (also here), you may agree with me that Dog No. 2 is Doc’s pup and successor.

More photos of Doc on the job: 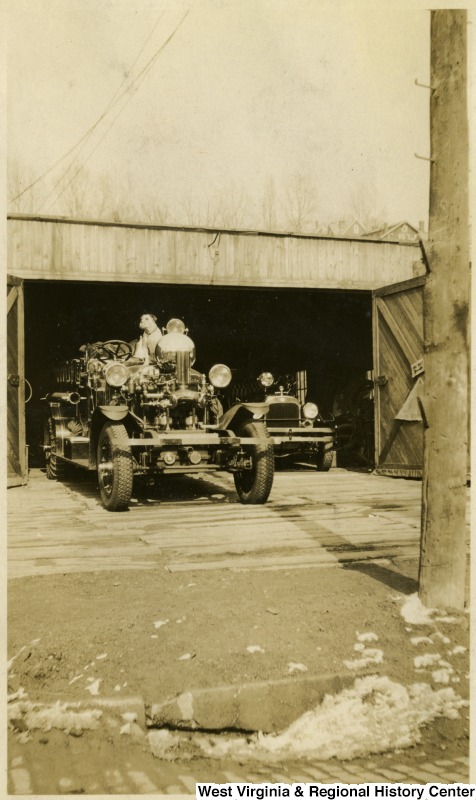 Doc enjoying some solo time in the fire truck, 1926. 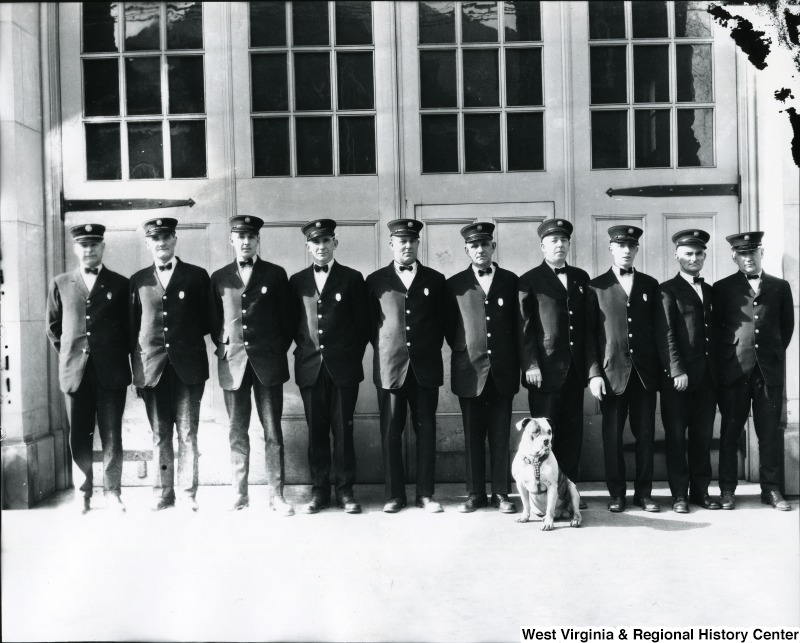 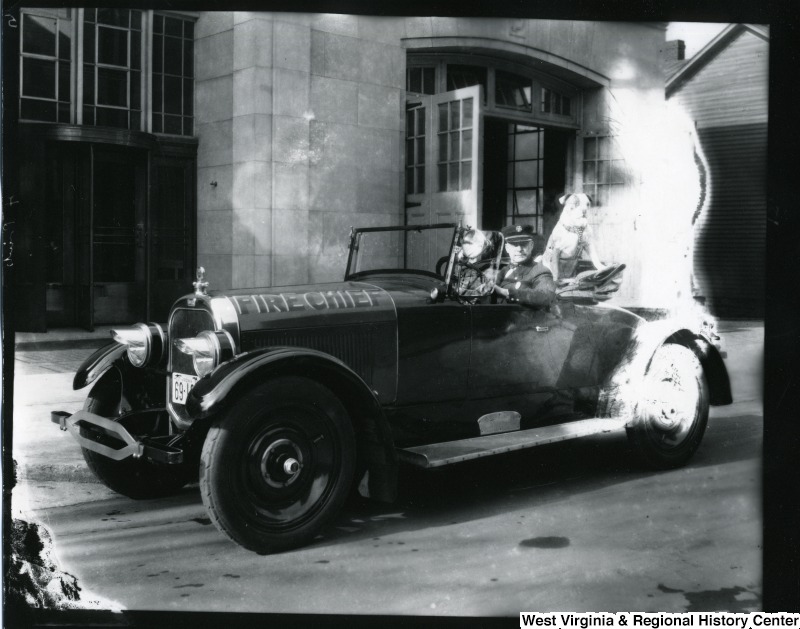 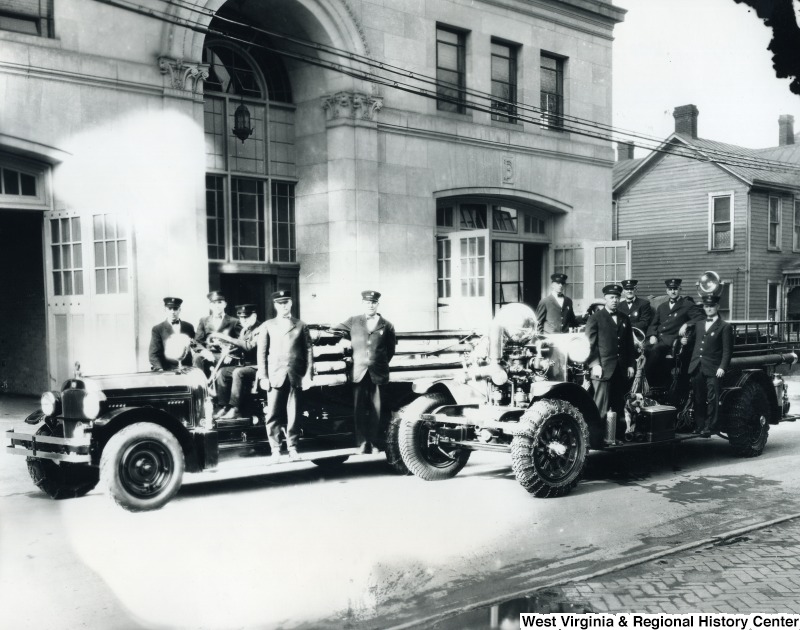 Doc, looking very pleased to be in the truck with his colleagues. 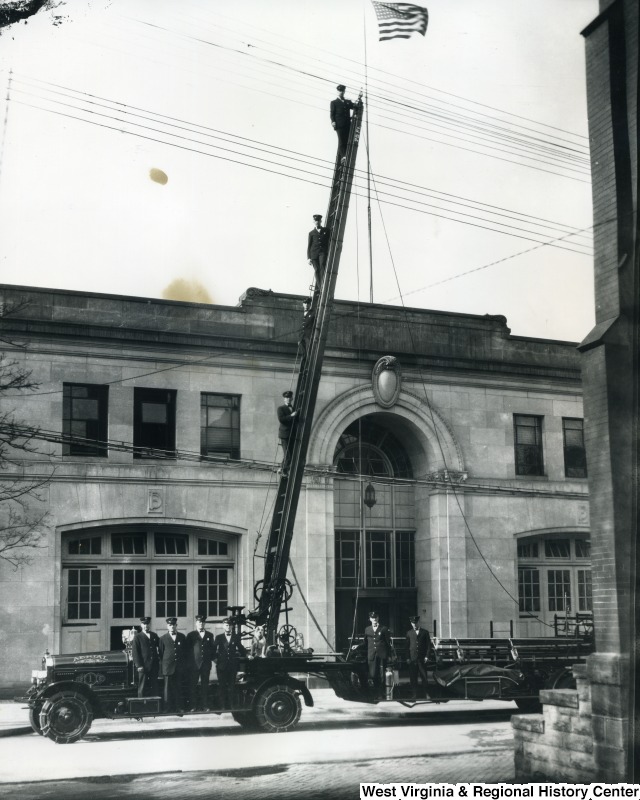 Doc with other MFD firefighters in the ladder truck.

While there is still room for more research on the life and times of Doc, I’m glad to have solved my mystery of the identity of the MFD dog.  We will work to update our online database of photos so that he is listed in the ones in which he appears.

Additional photos are from the WVRHC’s online collection at West Virginia History OnView.

One Response to 'Doc the Fire Dog'