“All of us at WVU Libraries are pleased to recognize Elizabeth Satterfield and Rachel Wattick for their tremendous achievements in researching their topics and presenting their findings,” Interim Dean of Libraries Karen Diaz said. “Our selection committee noted that they clearly dedicated a great deal of thought and time to gathering the necessary information and then writing their impressive works of scholarship.” 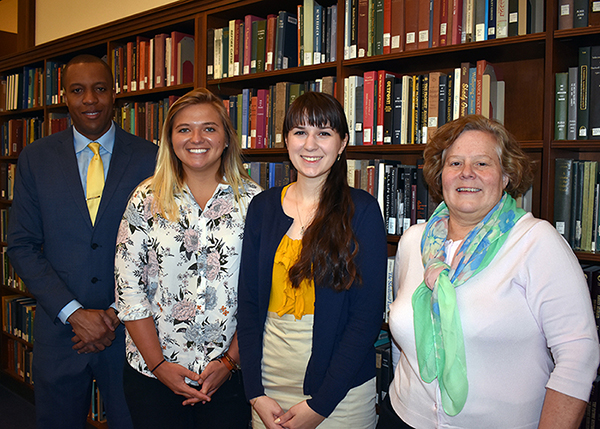 The WVU Libraries and the Honors College established the Robert F. Munn Undergraduate Library Scholars Award in 2009 to honor Dr. Robert F. Munn, dean of Library Services from 1957-1986. The award goes to one or more Honors students for an outstanding humanities or social sciences thesis based on research conducted in the WVU Libraries. Along with a $1,000 award, the scholar’s name is added to a plaque in the Downtown Campus Library.

“We are thrilled to celebrate Elizabeth and Rachel for their dedication and hard work in researching their topics and producing excellent examples of scholarship,” said Damien Clement, assistant dean of the Honors College. “The Honors College sets a high standard for students so it is always a proud moment when students exceed expectations.”

Satterfield, a junior from Independence, W.Va., won for her thesis, “Swiss Settlement in Randolph County, West Virginia: A Study of Land Deals, Policies, and Immigration,” which details the settlement of Helvetia, W.Va. While the Helvetia community has been covered from a cultural perspective, Satterfield’s extensive research at the West Virginia and Regional History Center illuminates a different dimension of the town by focusing on the sometimes shady land deals in the county.

Helvetia captured Satterfield’s attention when she first visited the small town a few years ago, but her interest grew when she came across Joseph H. Diss Debar while exploring potential research topics. Diss Debar designed West Virginia’s state seal and was involved in immigration and Swiss settlement.

“That’s where it became more interesting,” Satterfield said. “At the time, newspapers were run by Democrats or Republicans and what they printed had to do more with their political stance than the truth. So they might say really good things about an unsavory character that was involved with immigration when in reality he was involved in all these underhanded deals.”

Groups targeted immigrants through thousands of advertisements across the United States and in Switzerland, Germany and France.

“They would advertise ‘flat, good land’; but when settlers arrived here, they were sold wilderness that was a hillside that was rocky and not good for farming. So that was one of the swindles that occurred after the Civil War,” Satterfield said.

Satterfield completed her thesis early and will graduate in May 2019 with a bachelor’s degree in history and plans to pursue a master’s in historic preservation or public history.

Wattick, of Canonsburg, Pa., won for her thesis, “The Relationship between Dietary Quality and Mental Health in a Young Adult Appalachian College Population.” The paper relied not only on primary research conducted by Wattick but also in-depth secondary nutrition and medical research. Wattick’s work represents an important investigation into mental and public health issues in Appalachia.

While working in the Lifestyle Intervention Research Lab over the past two years, Wattick began studying nutrition and mental health, which is a new field. The focus has long been on the physical aspects of a poor diet and how it affects your mental capacity.

“The reason I wanted to examine the young adult population in Appalachia is because young adults have the highest rate of mental health disorders of any age group. Depression and anxiety are the two most prevalent disorders,” Wattick said. “I found lower fruit and vegetable intake and higher added sugar intake was significantly associated with higher rates of depression and anxiety.”

Typically, college students have problems with easily accessing healthy foods, and they face high-stress risk factors. She hopes research showing this relationship will encourage the University to implement efforts to support healthy eating.

“There are efforts to increase access to healthier foods. I think it has changed in the four years I’ve been here,” Wattick said. “There’s definitely an increase in people’s consciousness of their health; it’s just a matter of being able to pay for it and convenience as well.”

Wattick will graduate with a bachelor’s degree in Human Nutrition and Food, and plans to stay at WVU to earn a Ph.D. in social and behavior sciences from the School of Public Health.

“To make real changes, I need a better understanding of behavior and why humans behave like they do, as well as how society impacts our behaviors,” Wattick said. “That will enable me to actually encourage change.”