Why Did the Building Cross the Road?

[Editor’s note: October is American Archives Month, and I am grateful to Jessica for writing out her work process to show us how research in the archives can take you on an adventure! She also proves that archives aren’t just for big scholarly projects–they can be useful for local history research, genealogy, and more.]

We do our best to include all relevant information, and to identify the people and places in every photo we put onto West Virginia History OnView.  Sometimes, we just do not know who the people are, or where they are.  Recently, I came across this photo, which shows a group of men working to move a small building across the road.  The town is unidentified, and there is no additional information other than what is in the image. 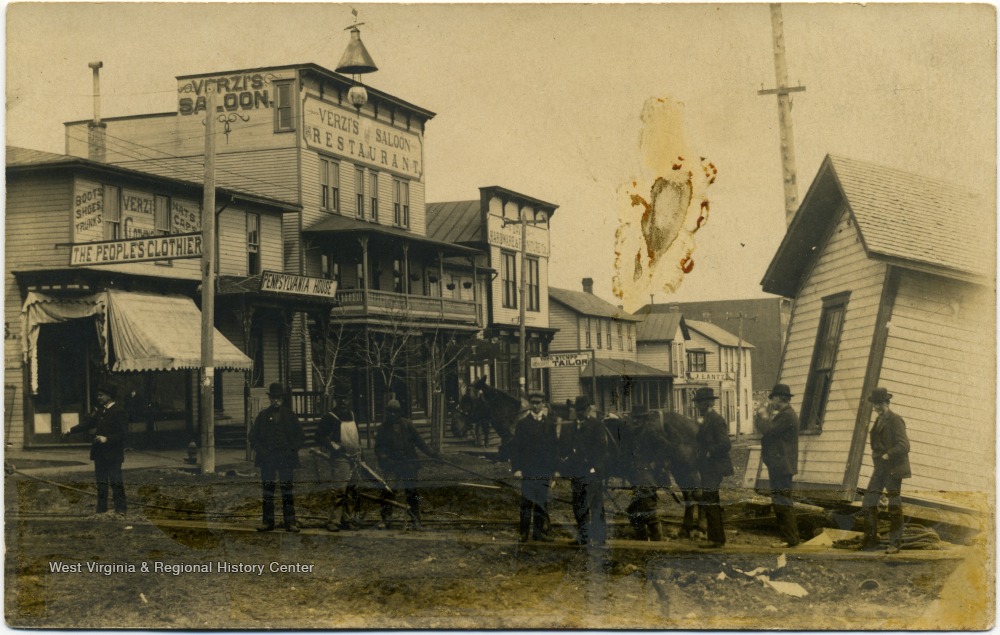 This image is ID number 050711 on West Virginia History OnView.

Pretty great, right? The buildings have interesting signs, and the group of men appear to be moving a small building with ropes.  Intriguing!  So I settled down and got to work.  First, I ran an online search for “The People’s Clothier,” “Verzi’s Saloon,” “Davis Hardware & Furniture Co,” and “Theo Stumpp Tailor.”  Businesses register with the state, and typically show up in the state “Report of the Treasurer.”  Not having any luck with this type of searches, I turned to Ancestry.com. 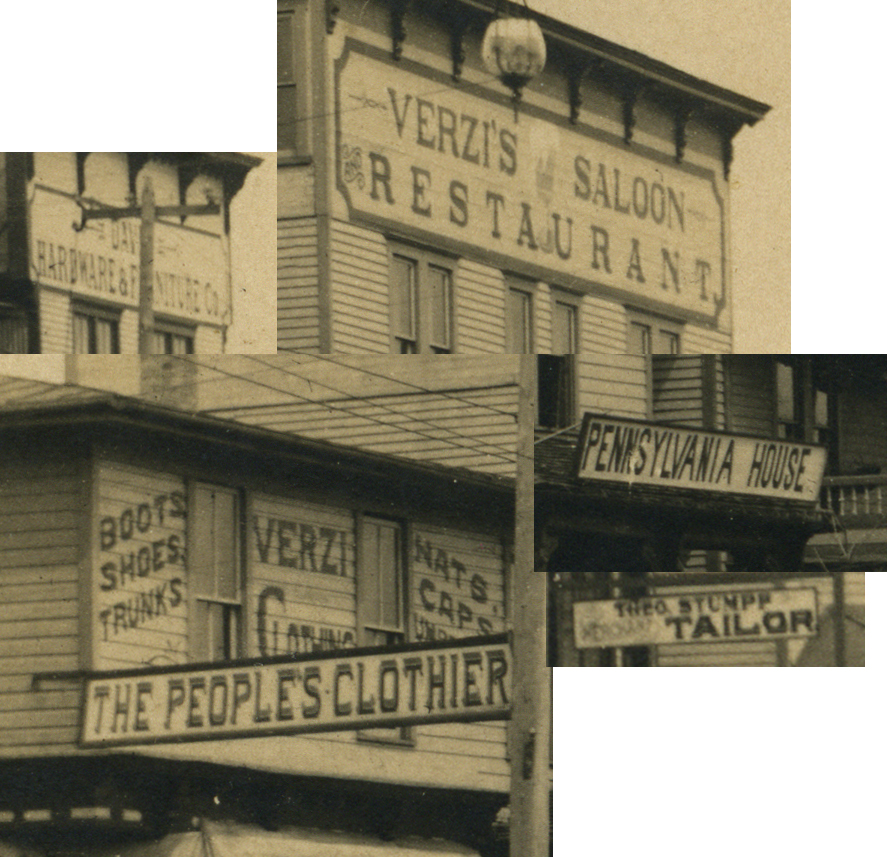 A closer look at some of the signs and advertisements visible in the photo.

Anyone visiting the WVRHC can utilize Ancestry’s Library Edition for free when working at one of our computers. (Ask a staff member to show you how next time you visit!).  I plugged in “Theo Stumpp” and West Virginia.  Multiple hits showed up, so I added the keyword “tailor.”  Bingo!  There was Theodore Stumpf, who briefly lived in Davis, WV.  The last step was to see if I could locate the particular street it was on, to confirm if it was really Davis, WV.  Not having any luck with Google searches– “”Theodore Stumpf Tailor” Davis WV” was not returning any hits–I turned to one of my favorite tools.

Theodore, his wife Mary, and his children, Elizabeth and Bruno, appear in the 1900 Davis, WV census.

Google Street View is so much fun to use when trying to track down a particular building or street.  I love seeing how buildings and towns have evolved over time (you may have seen my then-and-now series over on the WVU Libraries Instagram page).  I have found that early photographs tend to have been taken on or near the main street of any given town.  This theory did not disappoint.  William Avenue seems to be the main road through present-day Davis, so I started there.  A few minutes after “walking” down the street, I located a potential match. 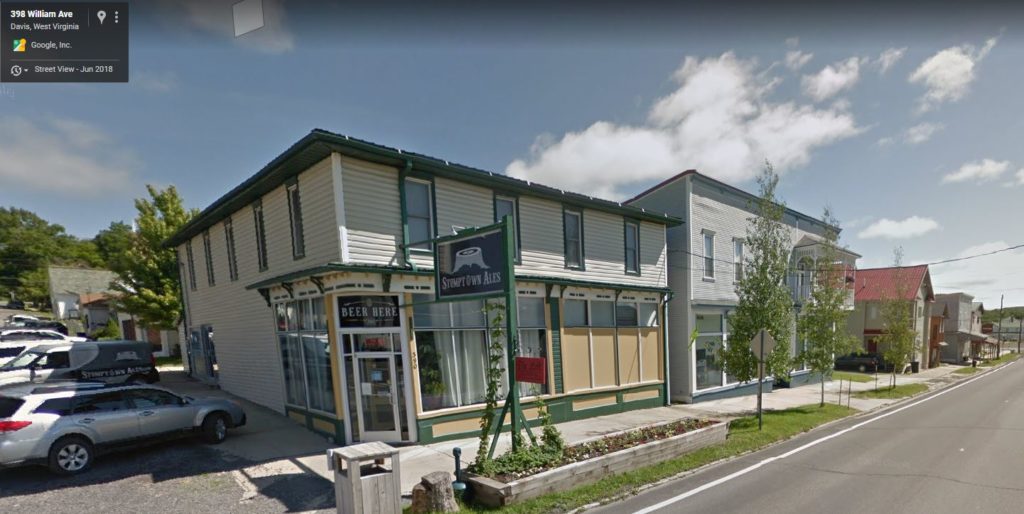 The building on the left looks like a very close match for the building with “The People’s Clothier” and “Pennsylvania House” signs in the original image. 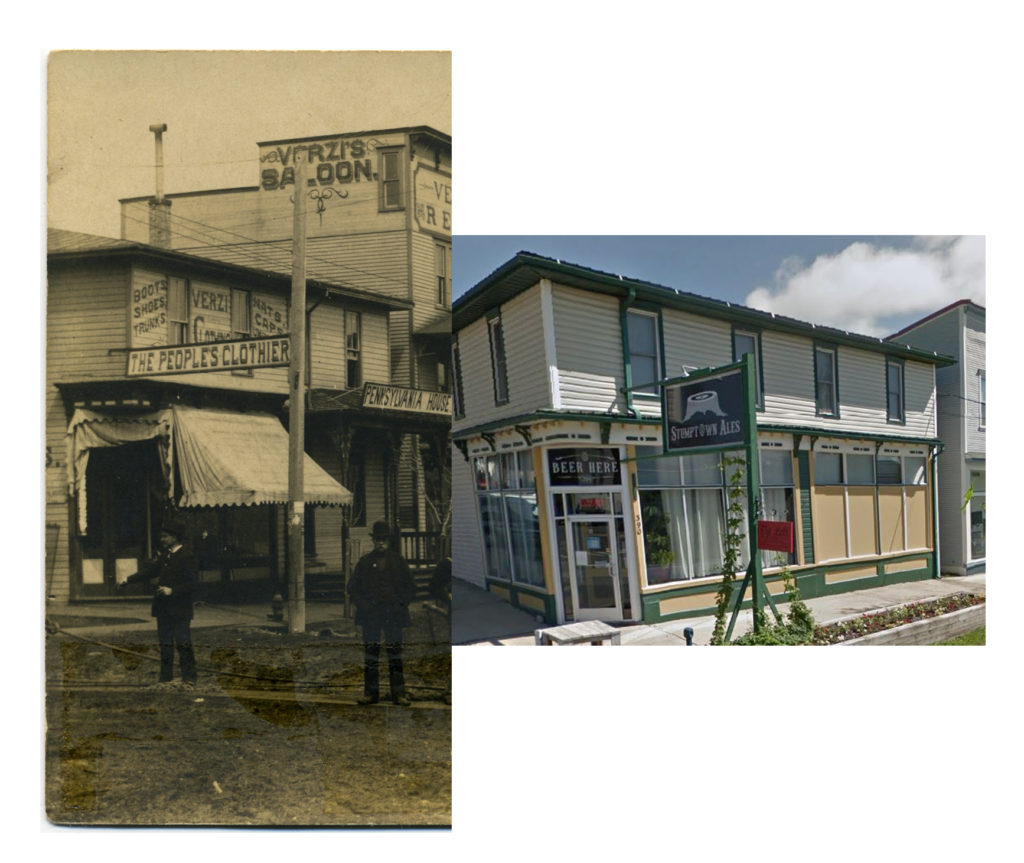 Note the similarities between the door on the left, the painted trim, and the general shape of the building.

There are a few details that stand out.  The door at left is set at the same angle on both buildings.  The light-colored trim above that door in the original is now the green trim on the present-day building.  The roof line, second story windows, and paneling beneath the window all confirm that it is the same building.  Clearly, additional windows were added at a later date, and the advertisements on the second story were painted over.

But one mystery remains… why were the men moving a building?? Theodore and his family appear on the 1900 census, but by the 1910 census, they are living in Missoula, Montana.  Sanborn Fire Insurance maps of Davis show this particular configuration of stores only in 1899, not on the previous map of 1894, or the following one of 1904. 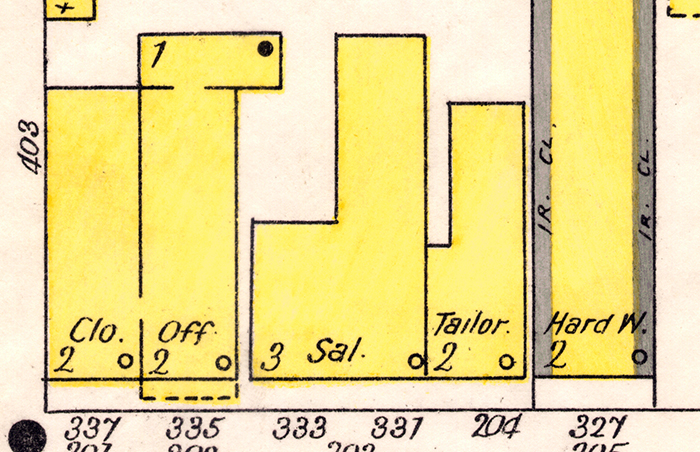 Taking all of this information into account, we can conclude that the photo was taken between 1894 and 1904.  So, sometime within that ten-year span, a group of men moved a building across William Avenue.  The collection the photo came from is A&M 4151, the Thompson Family of Canaan Valley, Business and Family Papers.  There might be additional information in some of the family papers regarding the move, but with almost six feet of materials, we cannot easily find the answer.  If anyone from Davis knows when or why this building was moved, please let me know! I would love to solve the mystery.

One Response to 'Why Did the Building Cross the Road?'