Recently I was looking at the West Virginia & Regional History Center’s Printed Ephemera collection when I came across a leaflet for West Virginia’s Golden Jubilee Celebration in Wheeling in 1913.  That year West Virginians were commemorating 50 years of being a state – not unlike the sesquicentennial activities that marked our 150th birthday three years ago. 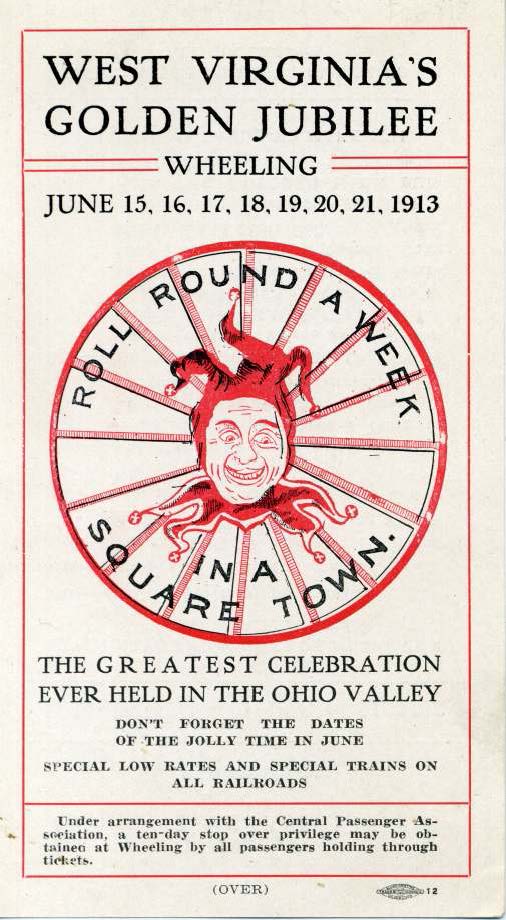 The front cover of the advertising leaflet.

In 1913, festivities were planned in cities across the state to mark the grand occasion. The two-page Wheeling advertisement caught my eye because of the imagery and especially the slogan, “Roll Around a Week in a Square Town.”  It boasts that the Golden Jubilee in Wheeling will be the “Greatest Celebration Ever Held in the Ohio Valley.”  As I looked it over, I noticed that the last item in the schedule of events on the second page advertised “Burlesque and Fantastic Parades” and in all caps, “DON’T MISS THE RUBBER NECK SUFFRAGETTES.” 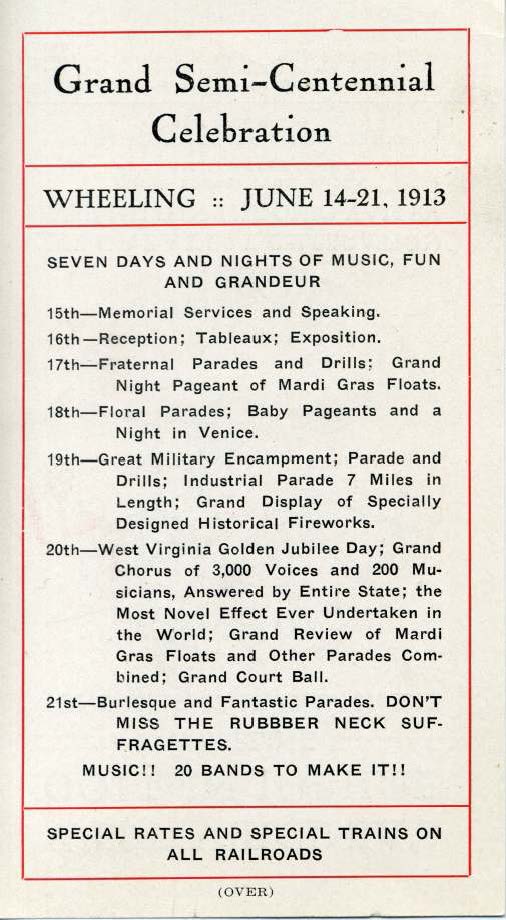 The reverse side which includes the schedule of events.

I was intrigued.  What was a “rubber neck suffragette?”  I thought maybe it was a musical group or some kind of slang term that I had not heard of before.  I did a quick Google search.  The top result linked to a news item. 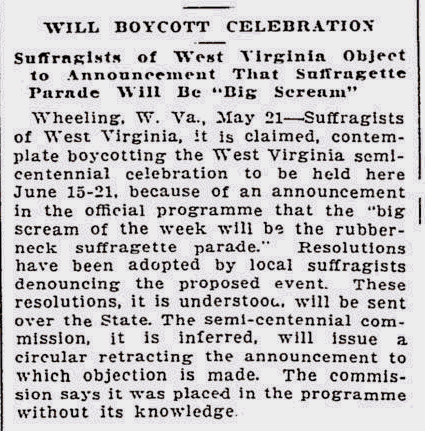 Article in the Boston Evening Transcript, May 21, 1913

I had stumbled upon a controversy.  Suffragists were outraged about a proposed burlesque “rubber neck suffragette” parade and threatened a boycott of the Semi-Centennial festivities.  A news service had picked up the report and it made it into a Boston paper.  To find out more about the story, I went to the local Wheeling newspapers on microfilm at the Center.  I found one article that directly addressed the situation. 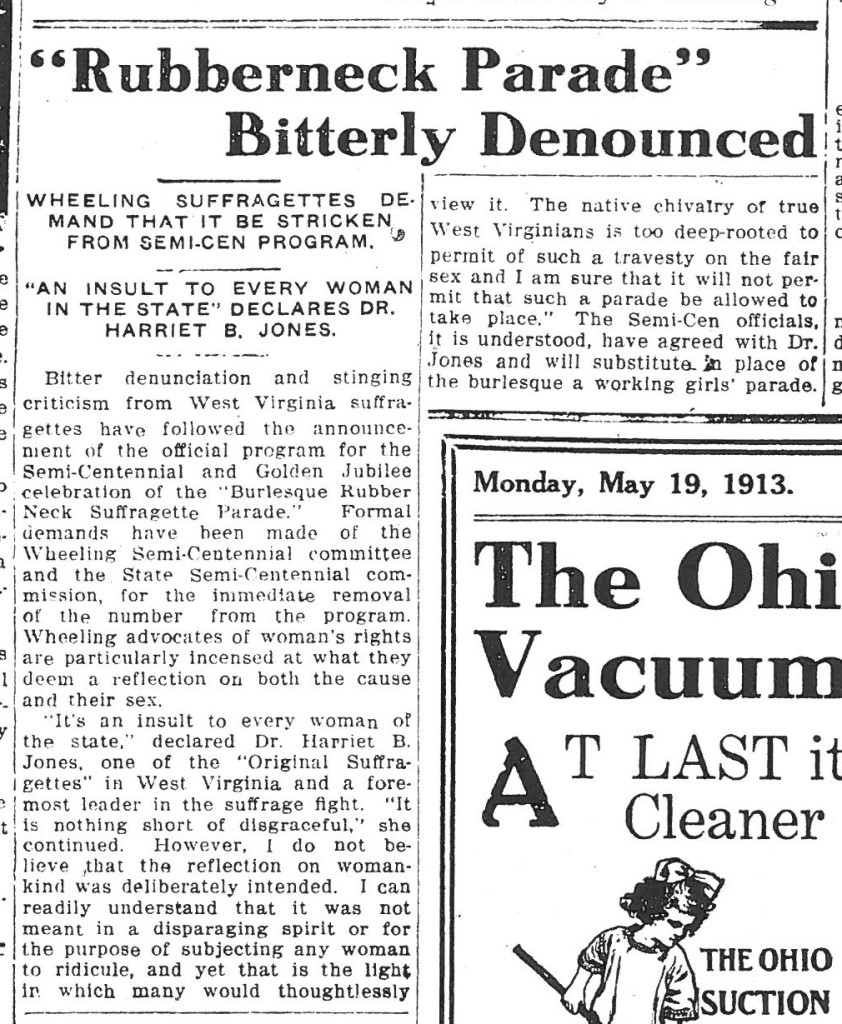 Noted West Virginia suffragette Dr. Harriet B. Jones declared the parade “an insult to every woman in the state.”  A large women’s suffrage parade had taken place in Washington, D.C. only a month before.  This event appeared to lampoon it. Women’s rights advocates in Wheeling were angry about the reflection of their “cause and their sex.”  Suffragists demanded that the parade be immediately removed from the program.

Dr. Harriet B. Jones, first woman licensed to practice medicine in West Virginia in 1885 and the first woman to be elected to the House of Delegates in 1924.  Jones was a noted leader of the women’s rights movement, serving as an officer in the West Virginia Equal Suffrage Association.

The unknown author of the Daily News article doubted the intention of the parade was to demean womankind and stated that the “native chivalry of true West Virginians is too deep-rooted to permit of such a travesty on the fair sex and I am sure that it will not permit such a parade to be allowed to take place.”  A working girls parade would take place instead.

And thus, it appears that the “rubber neck” parade was scrapped. No further mentions were found in Wheeling newspapers.  The WVRHC holds the official program of the Semi-Centennial as well as other souvenir books from the celebration, but none lists such an activity.  Perhaps this was a small victory for West Virginia suffragists, but they still faced judgement in the local newspapers. 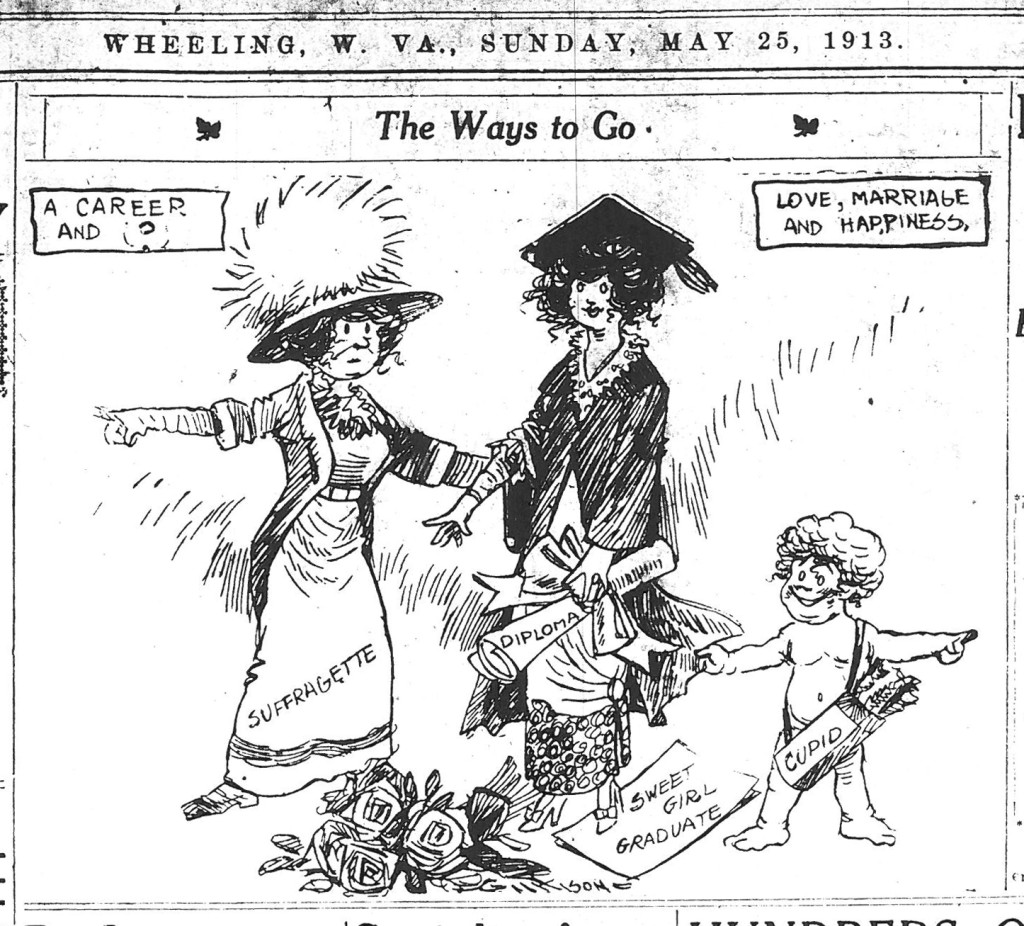 A cartoon on the front page of the Wheeling Sunday Register, May 25, 1913 shows a “sweet girl graduate” being pulled by a suffragette away from love, marriage, and happiness towards a career and the unknown.

The day following the publication of “The Ways to Go” cartoon, the Wheeling Register printed a letter to the editor from “A Suffragist Tho’ Married” who objected to the cartoon saying it was “direct slap at all suffragists and decidedly in error.” She asks “are all married women happy?” and “do all you men insist that marriage and suffrage cannot walk hand in hand?”  The letter write also notes that the Register had been progressive, but not on this issue.  She implores them to change.

In the cartoon accompanying the letter to the editor in the Wheeling Register, May 26, 1913, the suffragette embraces Cupid.

Changing the anti-suffrage mentality was a state and nationwide challenge. 1913 had begun as an encouraging year for West Virginia suffragists when the House of Delegates passed a state women’s suffrage amendment.  Unfortunately, the amendment did not have the support in the State Senate and so it went no further. The same amendment returned and passed both houses in 1915 but failed as a statewide constitutional referendum with two-thirds of the fifty-five counties rejecting the amendment.  Finally, in 1920 the West Virginia legislature ratified the national constitutional amendment granting women the right to vote.  The “Rubber Neck Suffragettes” controversy turned out to be only a small battle in the long and hard fought crusade for women’s suffrage.

Please note the WVRHC Printed Ephemera collection includes pamphlets, brochures, isolated periodical issues, news clippings, event announcements and programs, and advertisements.  The materials were primarily published from the late 19th century to the present.  The Center is selectively digitizing items from the collection and building an online index.

The Center also has an extensive collection of West Virginia Newspapers. Much is available on microfilm at the Center, but portions of the collection have been digitized and made available through the Library of Congress’ Chronicling America project.