Harriet B. Jones was born in Ebensburg, Pennsylvania, and grew up in Terra Alta, Preston County, West Virginia from the age of seven.  She attended Wheeling Female College in Wheeling, West Virginia, with a focus on music and art, graduating in 1875. Soon thereafter she concluded four years of Chautauqua courses.  Despite completing the traditional training for middle class women of her day, Jones was discontent.  She recognized the need for female physicians and pursued a medical degree at the Women’s Medical College of Baltimore.  She graduated in 1884 and later finished post-graduate studies to specialize in gynecology and abdominal surgery. 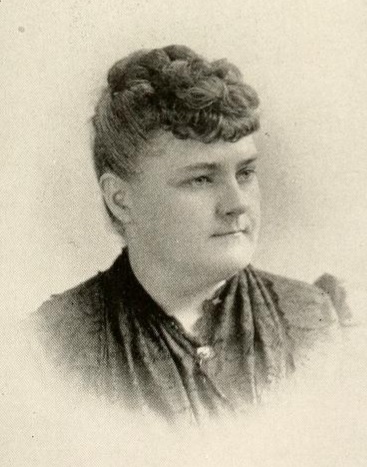 Harriet B. Jones ca. 1897. Image from American women: Fifteen Hundred Biographies with over 1,400 Portraits: a Comprehensive Encyclopedia of the Lives and Achievements of American Women during the Nineteenth Century, page 425.

In 1886, she opened a medical office in Wheeling making her the first licensed female physician in West Virginia.  She left private practice to be the assistant superintendent of the West Virginia State Hospital for the Insane in Weston in 1888, but returned to Wheeling three and a half years later to found a hospital for women that operated for the next twenty years. Dr. Jones regularly traveled around the state and gave talks on health and hygiene issues. She successfully lobbied for state sanitariums for tuberculosis victims, a state children’s home, and a girl’s reformatory. She served as secretary of the West Virginia Anti-Tuberculosis League and was active in the Women’s Christian Temperance Union and the West Virginia Federation of Women’s Clubs.  Jones also advocated for the admission of women to West Virginia University and other state colleges.

Despite her attention to many causes, Dr. Jones fiercely advocated for woman suffrage. For more than 30 years she was an enthusiastic supporter of the West Virginia suffrage movement and held numerous positions within the West Virginia Equal Suffrage Association (WVESA), serving as President in 1906. In 1907, along with National Association president Dr. Anna Howard Shaw, she addressed West Virginia lawmakers during a legislative hearing on resolutions for a suffrage amendment.  The resolutions, however, did not pass in either house.

In May 1913, she offered “bitter and stinging criticism” when the official program of the West Virginia Semi-Centennial celebration and Golden Jubilee in Wheeling included a “burlesque rubberneck suffragette parade.” The Wheeling Daily News on May 9, 1913 described Dr. Jones as “one of the ‘Original Suffragettes’ in West Virginia and a foremost leader in the suffrage fight.”   She declared to the newspaper that the burlesque was “an insult to every woman of the state” and “nothing short of disgraceful.”  Dr. Jones exhibited her savviness by adding that she did not think that the offense was deliberate and that “the native chivalry of true West Virginians is too deep rooted to permit of such a travesty on the fair sex.”  The celebration committee agreed and the burlesque was replaced by a “working girls parade.” For more information on this event, see this 2016 blog post. 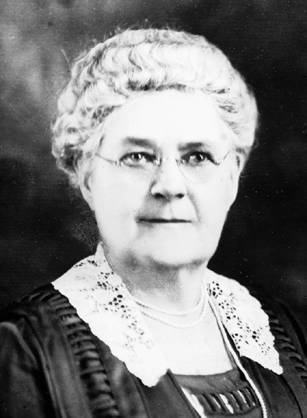 Harriet B. Jones ca. 1926.  This image can be found uncredited on a number of websites. It is published in the 1926 West Virginia Blue Book on page 190.

The West Virginia Legislature of 1915 brought the question of full suffrage to the voters in the 1916 election.  In preparation, the activities of the WVESA accelerated.  For her part, Dr. Jones arranged a speaking tour around the state for Mary E. Craigie, chairman of church work for the National Woman Suffrage Association, and two suffragists from Ohio.  She also organized a questionnaire and sent it to 150 newspaper editors, receiving 53 positive responses for suffrage.  Leading up to the vote, she spoke frequently for the campaign in West Virginia.  Still, the 1916 amendment failed by a wide margin. 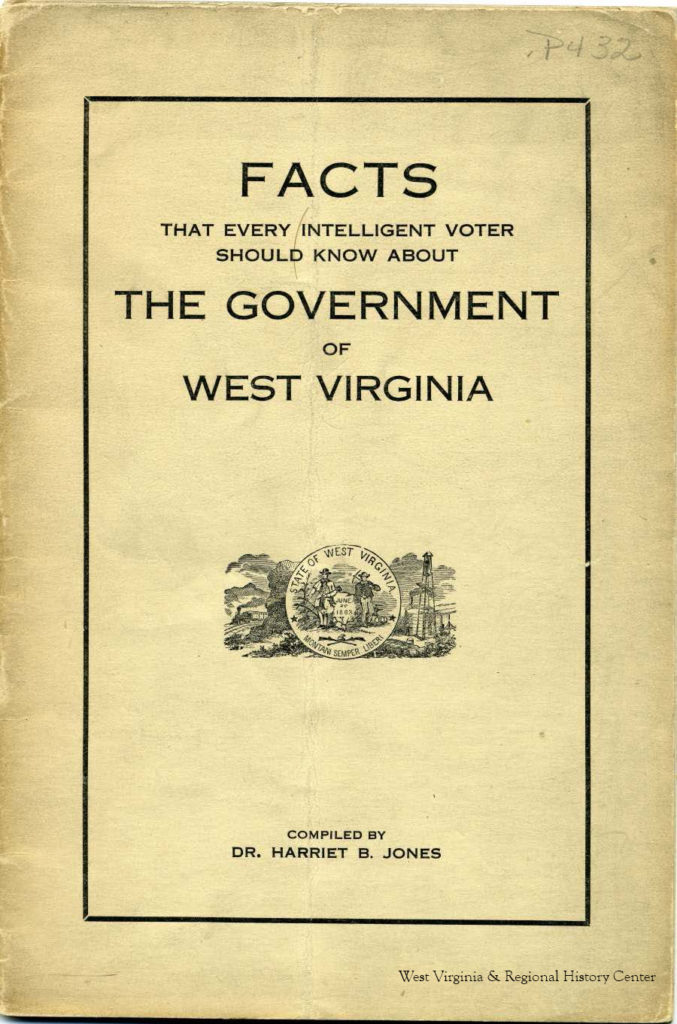 Dr. Jones authored several pamphlets, including “Parliamentary Laws,” “How We Got Our English Bible,” and “What You Should Know about the Government of West Virginia.”  The latter is part of the WVRHC’s Printed Ephemera Collection.  See and read the full text of the pamphlet here.

After ratification of the federal suffrage amendment in West Virginia in 1920, Dr. Jones continued her life of public service becoming active in the League of Women Voters. In 1924, she was first elected to West Virginia House of Delegates as a Republican representing Marshall County and served two terms. She was President of the Board of Directors of the West Virginia State Industrial Home for Girls for twelve years and a member of the State Board of Examiners for Nurses for several years as well.  She is credited for writing the history of the suffrage movement in West Virginia in the History of Woman Suffrage published by the National Association in 1922.  She died in Glen Dale, Marshall County, West Virginia, in 1943.