You Want A Coat? Give Me Apple Butter!: A Bartering Tailor in Early Morgantown

The West Virginia and Regional History Center recently acquired the daybook, or daily accounting log, for Morgantown tailor Sanford Pickenpaugh, who according to Ancestry, was born in Monongalia County on 30 October 1811, and passed away on 27 June 1898.  He married Aneliza Ramsey (1818-1899).  Dating from ca. 1838-1840, the daybook includes the names of the early residents of Morgantown, many of whom were descended from the earliest pioneers. 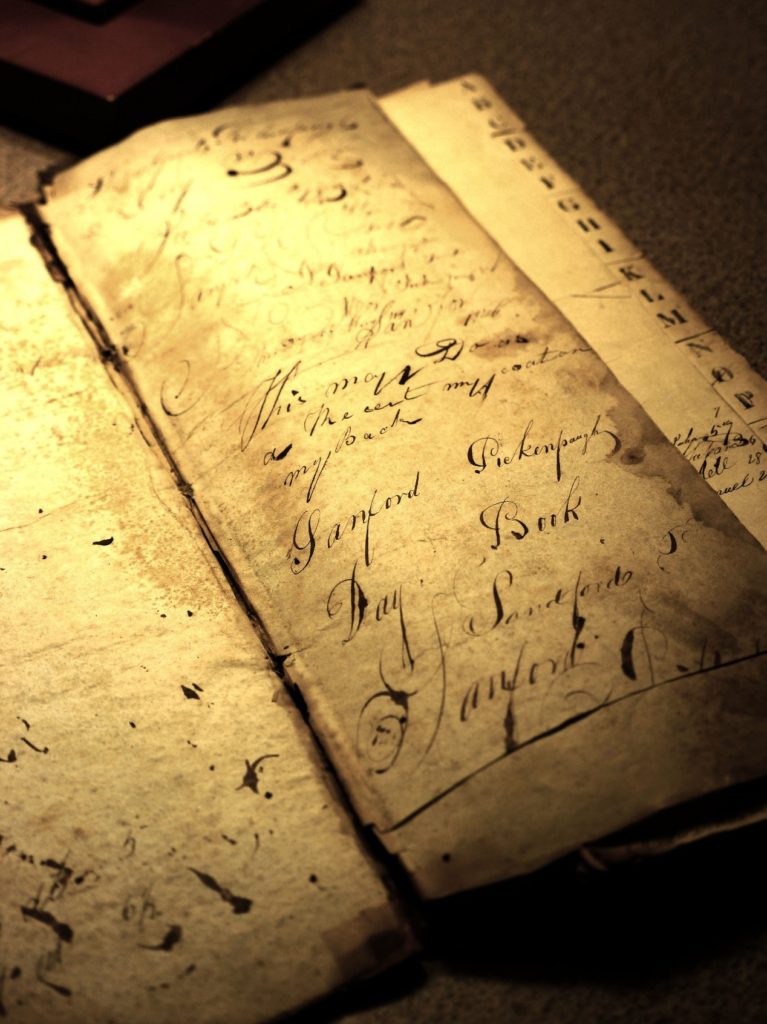 Inside the front cover of the 1838 Sanford Pickenpaugh daybook,
a Morgantown Tailor of 27 years at the time.

For example, one of his customers was Joseph Kerns (born 1798), a grandson of Michael Kerns (born 1740), a veteran of the Revolutionary War, and an early Morgantown pioneer responsible for building Kerns Fort.  Erected on a site overlooking Decker’s Creek, the fort featured a commanding view of the surrounding area. 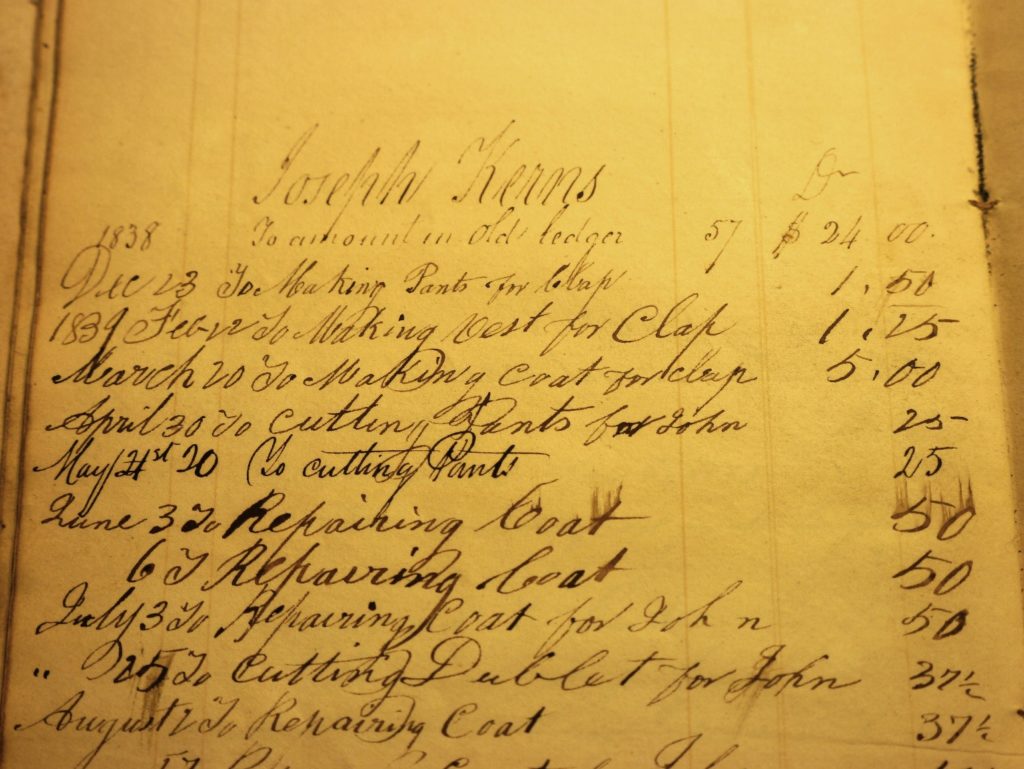 And then there’s Nimrod Dent (1792-1864) who was the son of John Dent (1755-1840), an early pioneer who settled in Monongalia County in 1776 at the age of 21, and then served during the Revolutionary War building forts and fighting Indians in the region of the upper Ohio.  After resigning in November 1780, he came back to Monongalia County and established a plantation on Dent’s Creek, about six miles from Morgantown.  A granddaughter later reminisced about the plantation, where Nimrod grew up:

“The principal productions were corn, wheat, tobacco, buck-wheat and flax. Large flocks of sheep were raised. All the clothing blankets were made at home. Yarn was spun, colored and knit into stockings. From the flax was made all the household linen, even the thread that was used being made from the finest of flax.”

“In the kitchen was a large fireplace where the cooking was done. Chestnut, hickory and oak were used for fuel. Fire was kept overnight by laying thick pieces of bark on the coals then covering them thickly with ashes. If the fire went out it had to be started with a flint as there were no matches in those days. There was a crane in the fireplace which had several hooks so that two or three kettles could hang over the fire at one time. The bread was baked in ovens and on the hearth.  There were two cook tables and plenty of cooking utensils in the kitchen. A little way from the kitchen, on the bank of a small creek, called “Dent’s Run,” was a large stone milk-house. There was a spring close by, and the water trickled from it across the floor of the milk-house, keeping the milk always cool.”

According to the granddaughter, John Dent’s children acquired land near their father’s plantation, and apparently the son Nimrod was one of them.  The daybook documents Nimrod purchasing clothing for his family, and his payment with bushels of corn and barrels of flour suggests that he had a farm like his father. 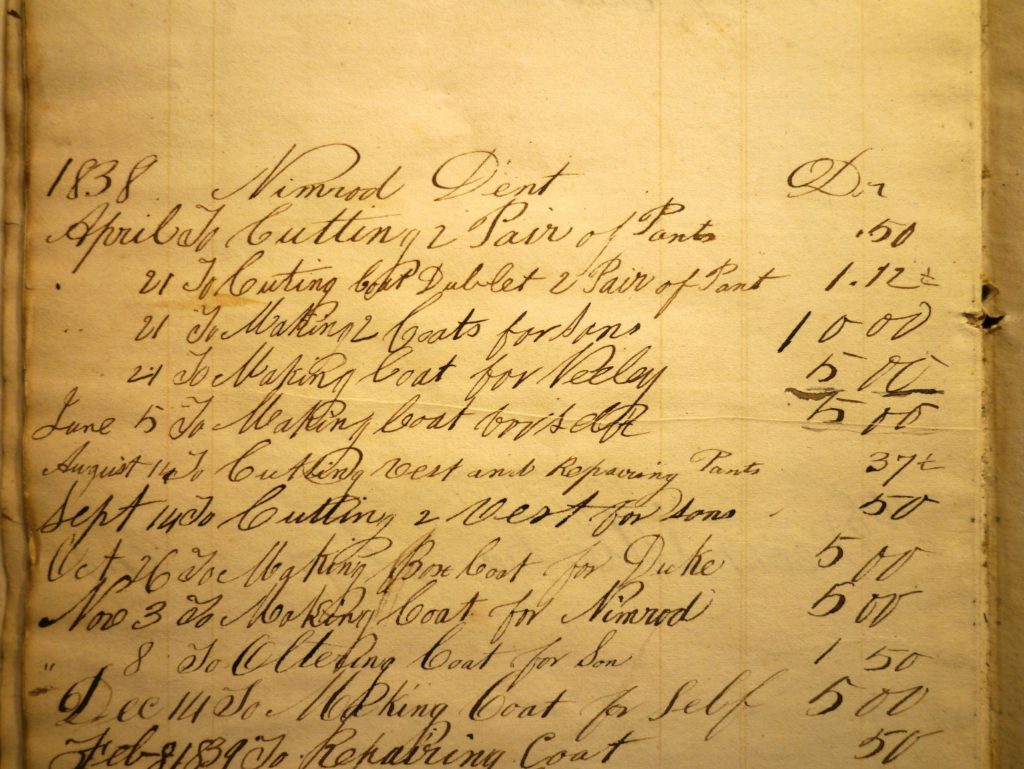 Record of billing Nimrod Dent for purchase of clothing. 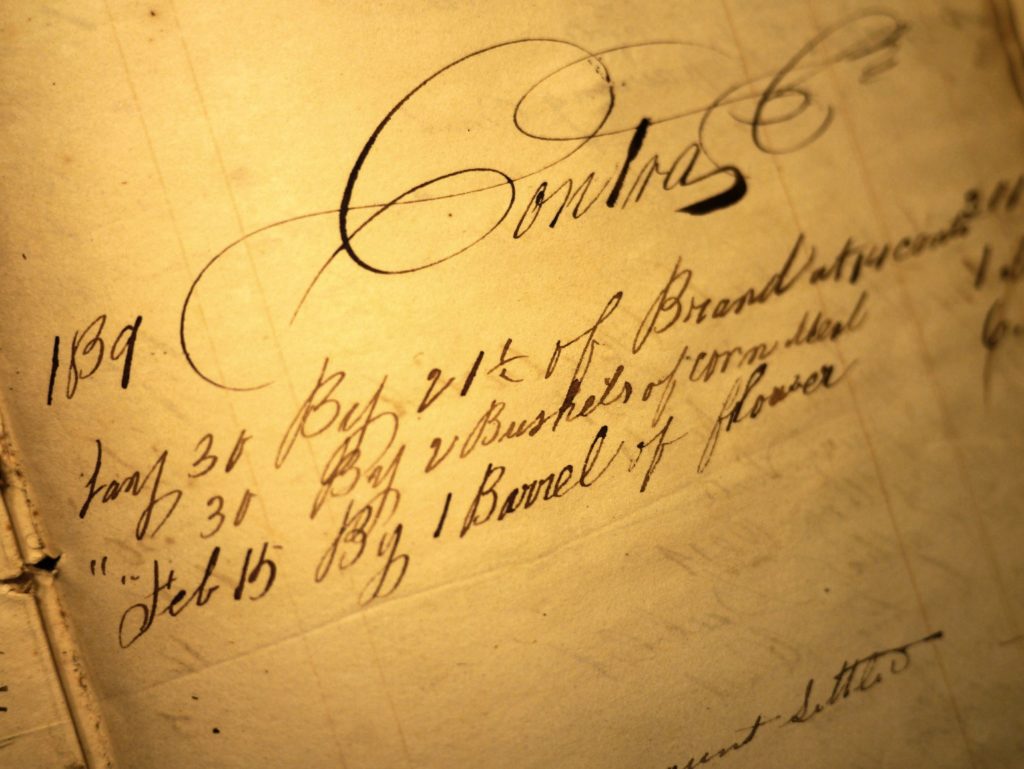 Record of Payment by Nimrod Dent for clothing,
including bushels of corn and a barrel of flour.

The daybook shows that many transactions, like Nimrod’s, involved payment by means other than currency, suggesting that a bartering economy was operative in Morgantown in the 1830s.  For example, Mrs. Owen Hawker purchased a coat for her son in 1839 by providing Pickenpaugh a large quantity of apple butter in installments of quarts and gallons. 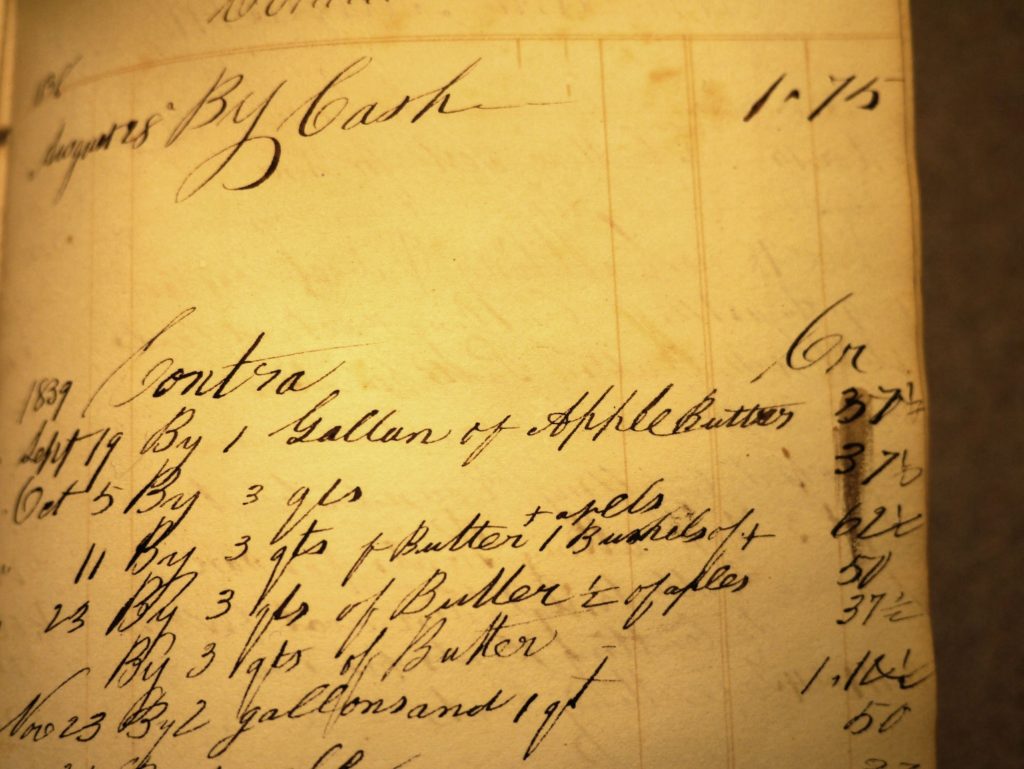 Record of payment with apple butter by Mrs. Owen Harker for a coat for her son.

Other goods bartered for clothing documented in the daybook include bundles of straw, bushels of potatoes, corn meal, and lumber, among others.

The Pickenpaugh daybook was a gift of the late Vaughan Kiger of Morgantown, and will be added to the Kiger collection under cataloging number A&M 3950. 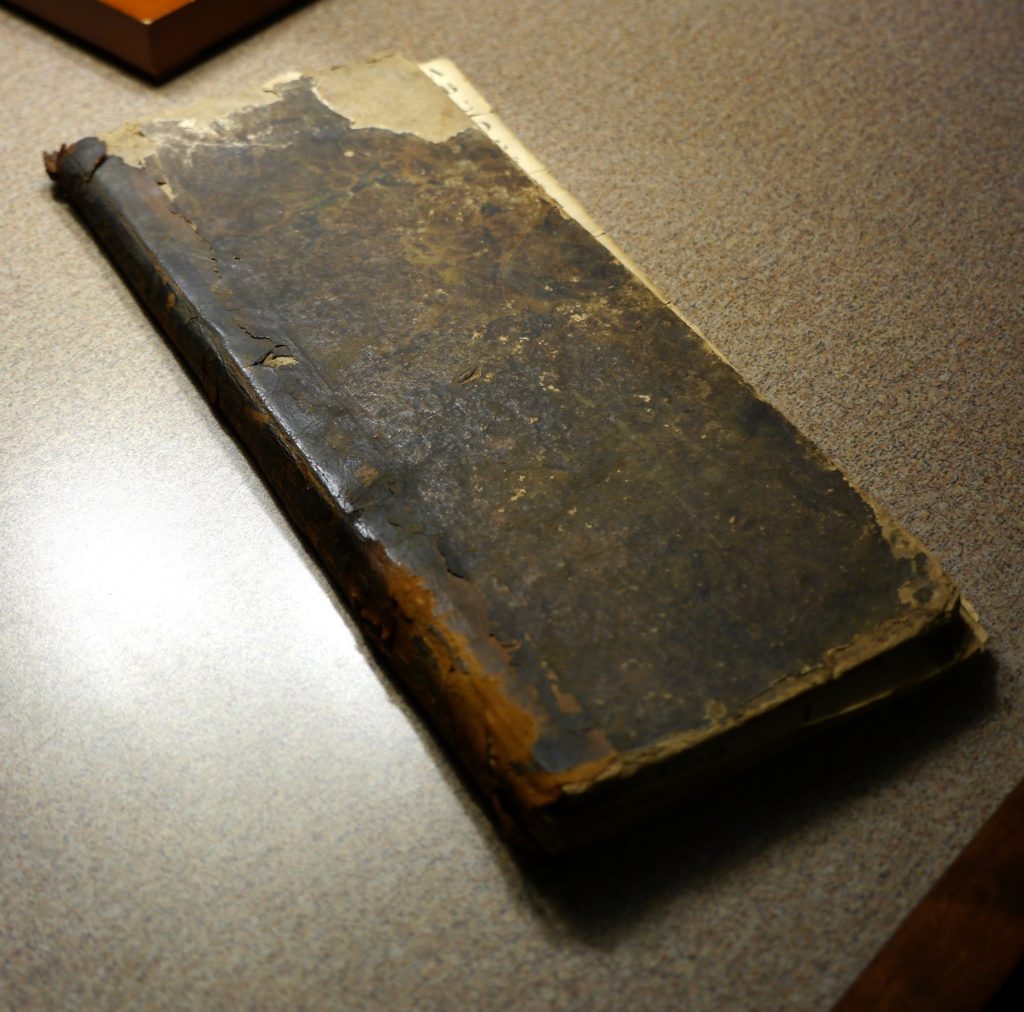 For information regarding Sanford Pickenpaugh, his page on the Ancestry website was consulted.

For information regarding pioneers Michael Kerns and John Dent, pages on the Hacker’s Creek Pioneer Descendants website were consulted.

For other History Center blog posts related to pioneers, see: