WVRHC releases digital photographs from the career of Senator Rockefeller

The images, taken by the Senate Photographic Studio, begin with the Senator’s first swearing-in ceremony in January 1985 and help tell the story of his many contributions in the U.S. Congress. The photographs capture the Senator through the years speaking at press events, presiding over committee hearings, and attending functions on Capitol Hill. He was photographed with policy leaders, business directors, and many of his congressional colleagues. 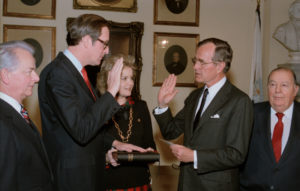 Photographs show Senator Rockefeller involved in causes that were most important to him. He is pictured being recognized for his work on the National Commission on Children, speaking to the media at a 1990 Pepper Commission on comprehensive health care press event, and chairing a 2011 Commerce Committee hearing for the Public Safety Spectrum Act.

There are lighthearted moments, as well. One such moment is the fruit diplomacy between Senator Rockefeller and Senator Graham of Florida, in which they were photographed trading West Virginia apples for Florida oranges following the WVU football team win over Miami in November 1993.

Additionally, a large portion of the photographs are of individuals, organizations, and school groups from West Virginia visiting the Senator’s office or posing with him on the steps of Capitol Hill. Because of the volume of photographs, it was not possible to identify everyone. The West Virginia & Regional History Center invites users with identification information to contact the Center via email or Facebook.

This is the third release of materials from the Rockefeller archives. In February, the Senator’s Legacy Memos were made available online, and the press materials were opened in May. To view more of the collection, visit https://rockefeller.lib.wvu.edu or West Virginia & Regional History Center on the 6th floor of the Wise Library.

The Libraries are releasing the digital photographs from the Rockefeller archives in October in celebration of American Archives Month, which occurs every year to raise awareness about the value of archives and archivists. The John D. Rockefeller IV Senatorial Archives was given to the Libraries in November 2014 and joins in excess of two dozen congressional and political papers collections that document more than 150 years of West Virginia state and national history and represent U.S. congressional service from 1861 to the present.