Celebrating 50 Years of Star Trek: The Jay Chattaway Papers at the WVRHC

On September 7, 2016, fans across the world celebrated the 50th anniversary of the influential sci-fi television series, Star Trek.  Several staff members of the West Virginia & Regional History Center happen to be devoted admirers of the show (i.e., Trekkies) and we appreciate any connection between Star Trek and our work.  Recently, Curator Stewart Plein blogged about the newly acquired Star Trek miniature book that is part of the Center’s Rare Book Collection.  The miniature is definitely fascinating, but it is not the only Star Trek material at the West Virginia & Regional History Center.

The Jay Chattaway Papers (A&M 3895) also have a home at the WVRHC.  Chattaway is an Emmy winning television and film composer who is also an alum of WVU’s School of Music.  He is best known for his work on several Star Trek series including Star Trek: the Next Generation, Deep Space Nine, Voyager, and Enterprise.  Working with the franchise for 18 years, Chattaway composed for over 200 episodes.

In this short video, Jay Chattaway describes winning an Emmy and talks about his experiences at WVU.

The Chattaway collection contains production materials related to music composed by Chattaway for these series, including scripts, sketches, scores, cue sheets, breakdowns of spotting notes, spotting notes, and other material. 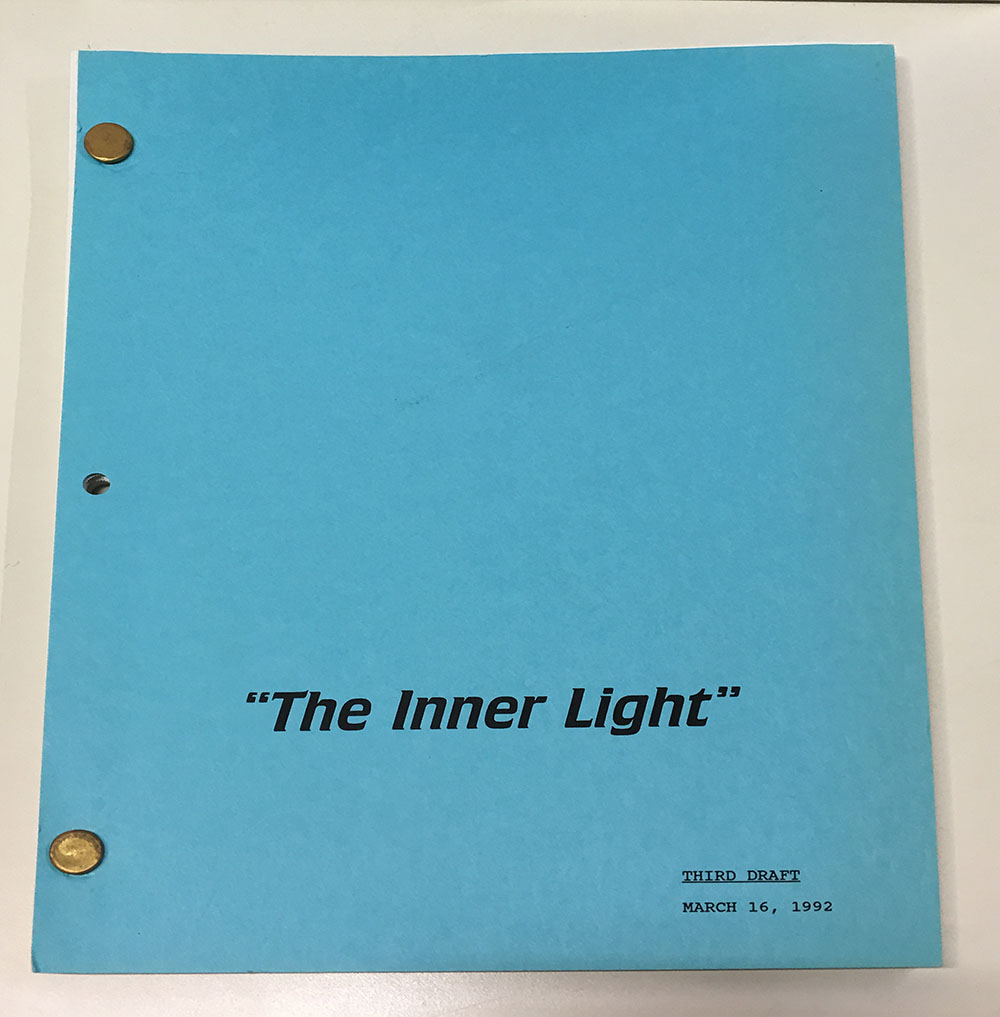 The script for “The Inner Light.”

Perhaps Chattaway’s best known piece is the simple penny whistle solo from the Next Generation episode, “The Inner Light.”  In this episode, Captain Picard lives an entire lifetime in just twenty minutes while under the control of an alien probe.  Widely considered to be one of the best Next Generation episodes, the Picard’s solo on the penny whistle is also highly regarded and known to many fans. 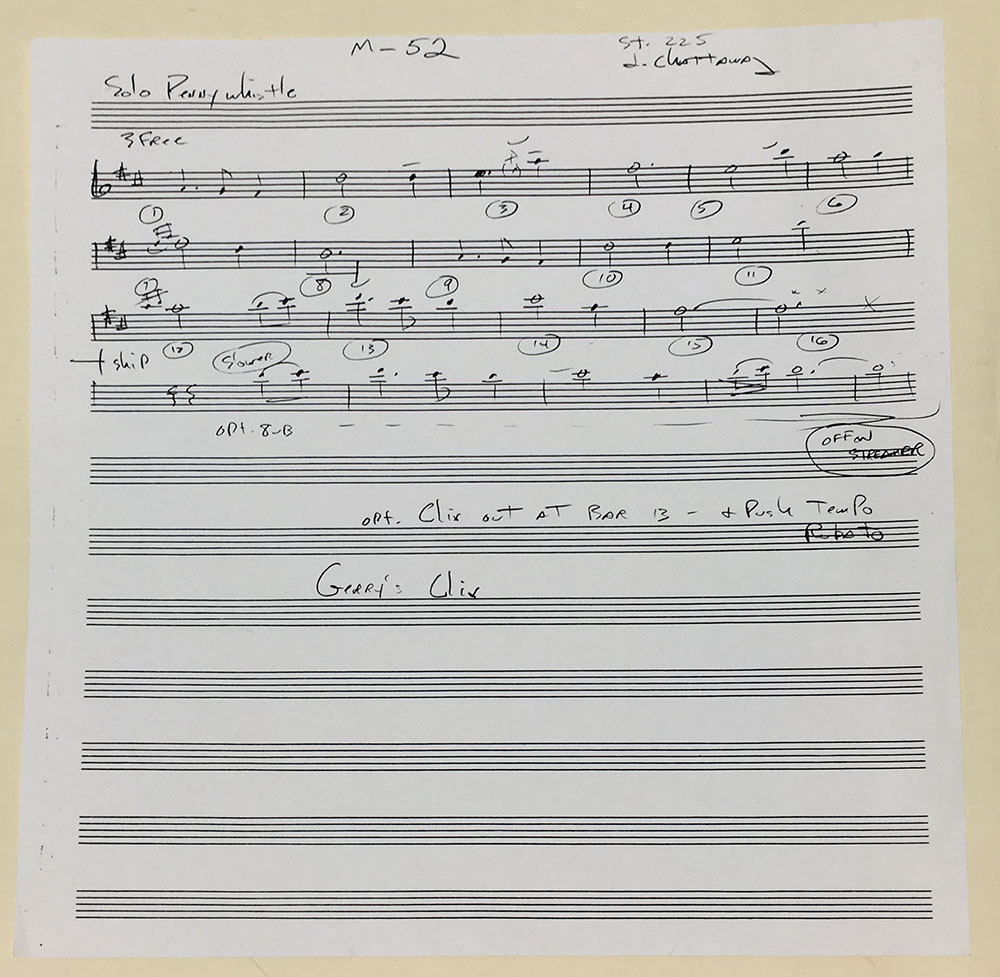 The score for the final penny whistle solo in “The Inner Light.”

The final scene of “The Inner Light” – Picard plays the penny whistle solo shown in the score above.

For Star Trek fans, the Chattaway Papers are a tangible piece of the show that they love, but the materials are also useful for academic research.  A graduate student from North Carolina has recently used the scores and sketches in comparative research on music for television. 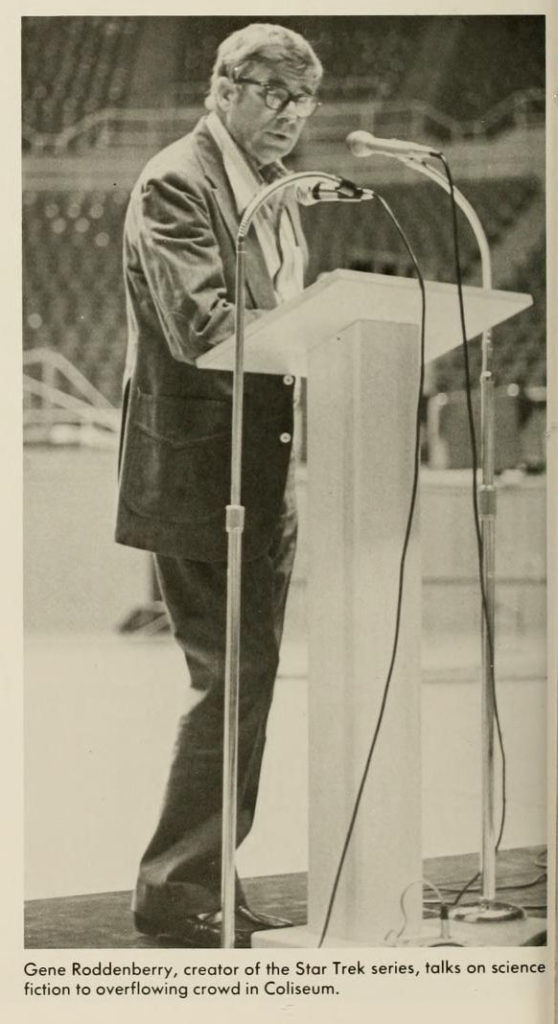 This image of Star Trek Creator Gene Roddenberry was featured in the 1975 Monticola.   Roddenberry visited as part of a lecture series.  The event at the Coliseum was standing room only!

With a revived movie franchise and a new television drama coming soon, Star Trek fans have much to look forward to.  We are honored to have a part of the franchise history at the WVRHC.