Early scientific journals were the private notebooks of scientists. Luxurious replicas of two notebooks by 15th Century Italian artist, mathematician, inventor and writer Leonardo da Vinci are available to examine in the WVU Libraries Rare Book Room. Leonardo wrote in Italian and using mirrored writing, writing backwards from right to left and illustrating with drawings. The notebooks contain his observations and brainstorming on multiple subjects in text, diagrams, and illustrations.

The Codice Leicester and Codice del Volo in their protective boxes: 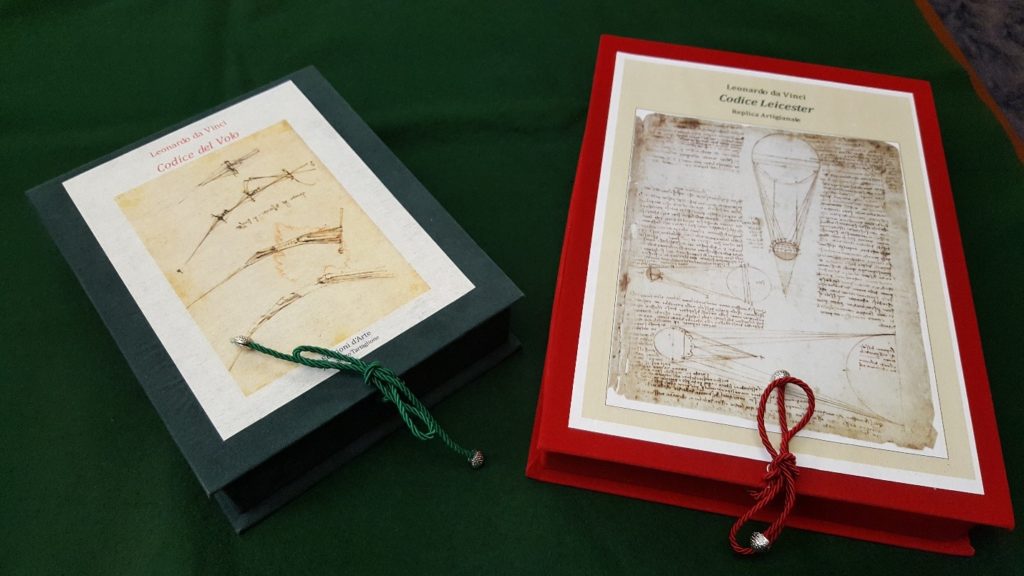 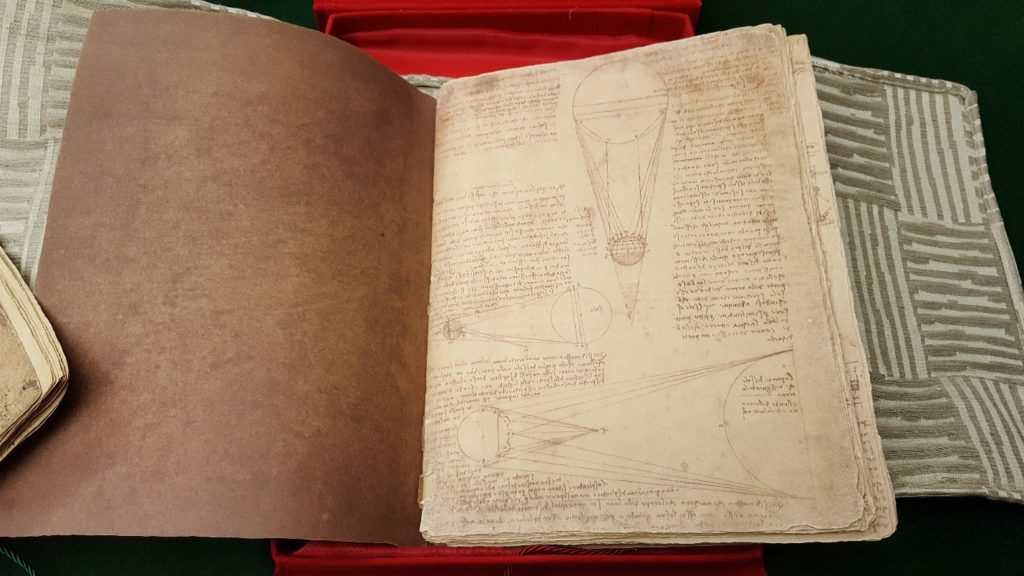 In the Codice Leicester Leonardo’s brilliant mind brainstorms through many topics. A description of the content from an exhibit of the original at the Pope Gallery in Raleigh, NC reads:

“The central theme of the work is water, but this quickly expands into astronomy (because he believed that the moon’s surface was covered in water), light and shade, and mechanics, as he investigates aspects of impetus, percussion, and wave action in the movement of water. Along the way Leonardo makes observations on such diverse subjects as why the sky appears blue, the journey of a bubble rising through water, why fossilized seashells are found on mountaintops, and the nature of celestial light.”

His explorations “laid the groundwork for the airplane, helicopter, and automobile, as well as the military tank, firefighter’s ladder and construction crane” (Feinberg).

A second notebook, his Codice del Volo (1505) translates to dynamics of flight of birds and contains Leonardo’s illustrations for what resembles an early hand-glider or a dragon prosthetic from the Dreamworks film How to Train Your Dragon (2010). 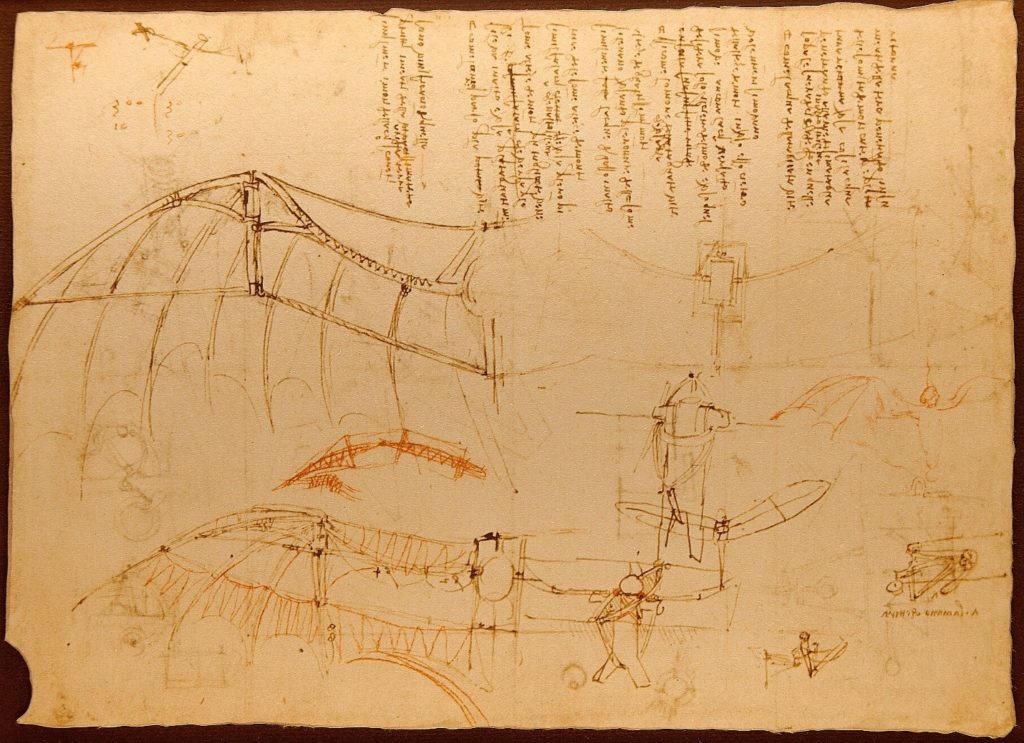 Another page from the Codice del Volo shows his mind working in the drawing of a leaf overlaid on the text: 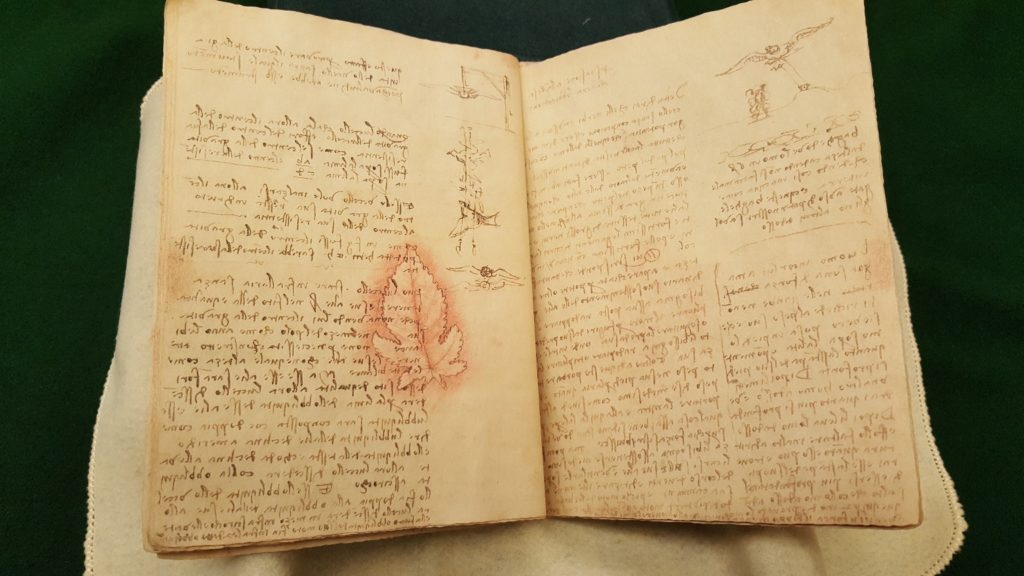 Although mirror writing, “writing in the reverse direction to what is normal in a particular language and in which the individual letters are also reversed” (Canzano), can occur with brain damage and other brain disorders, it is also observed in healthy and notably outstanding people. Along with Leonardo, Alice in Wonderland author Lewis Carroll was observed to use mirror writing. “Individuals may be unaware of their own facility for mirror writing, and may have difficulty in reading it” (Schott). Scientists have studied Leonardo’s handwriting along with considering his sinistrality (left-handedness) as variables to propose that his language skills were localized in the “more unusual right hemisphere” of his brain. 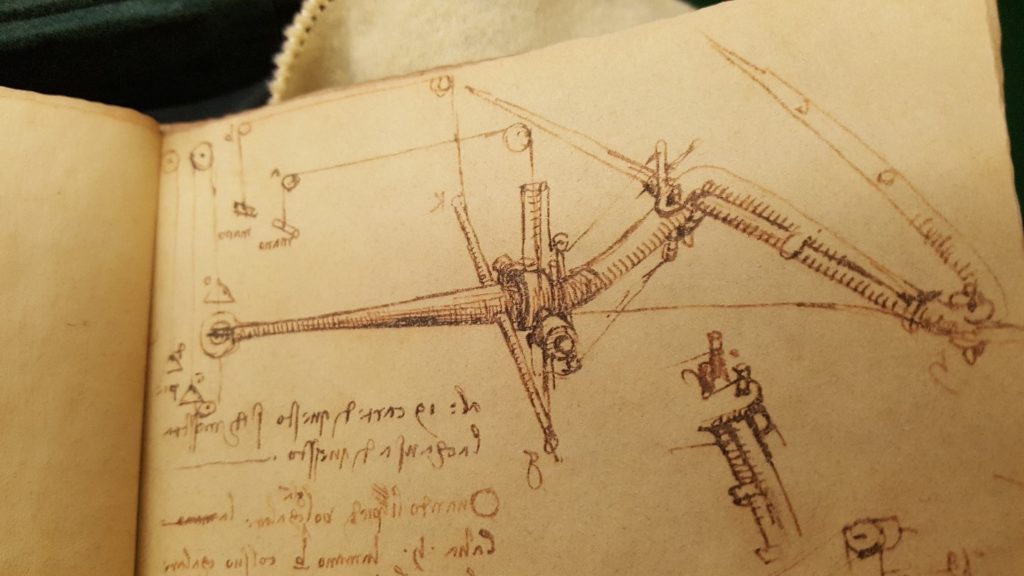 The original Codice Leicester was purchased by Bill Gates for 30 million dollars, the highest priced book in history. Gates traditionally lent the work for exhibit once per year. WVU’s beautiful reproduction is available to examine by any individual or group that makes an appointment. The edition was produced by Smith & Press, a publisher specializing in luxurious reproductions of historical works such as The Nuremburg Chronicle. An original Nuremburg Chronicle is one WVU’s Rare Book Room treasures.

Many of Leonardo’s notebooks are available in the library collection, including standard editions of facsimiles that can be checked out.

You can see the Leonardo notebook facsimiles and other books in the Rare Book Collection by contacting the West Virginia and Regional History Center to make an appointment.

To learn more, this six-minute video made by a young American student provides an excellent concise summary of Leonardo da Vinci and his notebooks.