To help commemorate the 150th anniversary of the founding of West Virginia University, a historical photography exhibit featuring holdings of the West Virginia and Regional History Center is showing at the Erickson Alumni Center.

In addition to photographs, the History Center also possesses scrapbooks, letters, and other material related to the history of WVU, including what is known in the archival profession as “ephemera,” or material intended to perform a function of limited duration, such as announcements, invitations, programs, tickets, schedules, etc.  The website of the Ephemera Society of America provides an informative listing of examples on their website.  Ephemera from the History Center’s collections will be presented here to further celebrate WVU’s 150 years of service.

Mountaineer Football figures prominently in our ephemera holdings, including these antique game tickets from the 1895 and 1900 seasons: 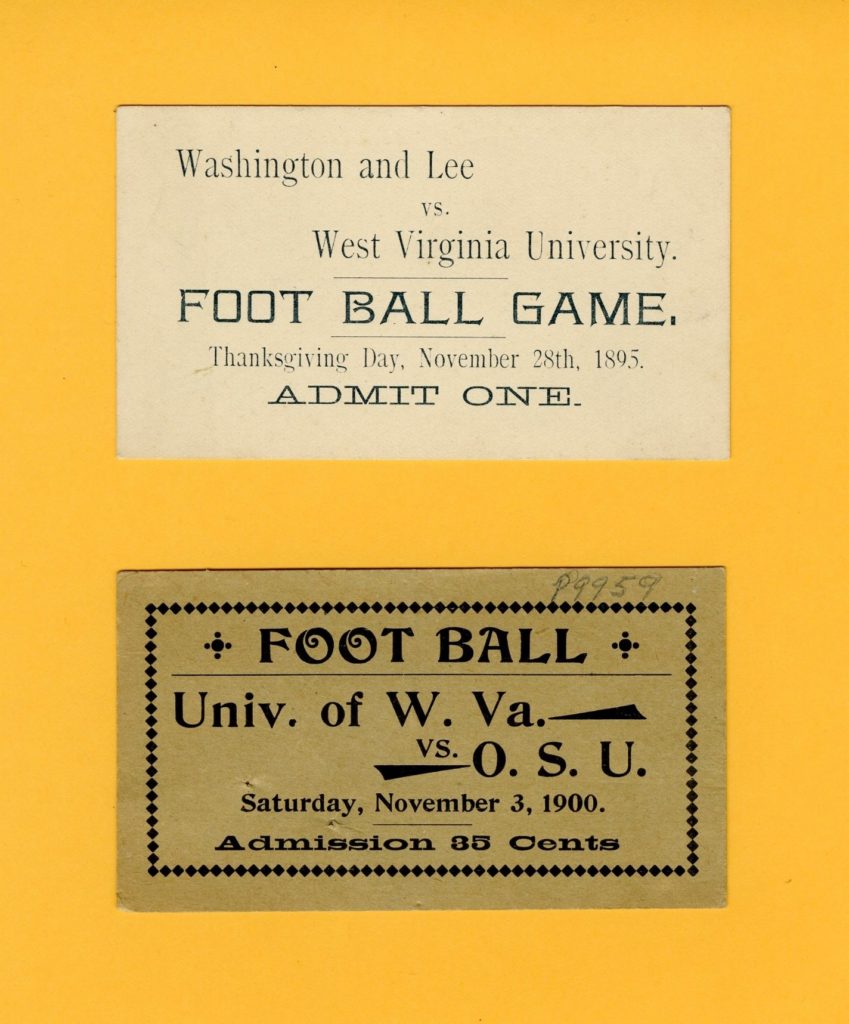 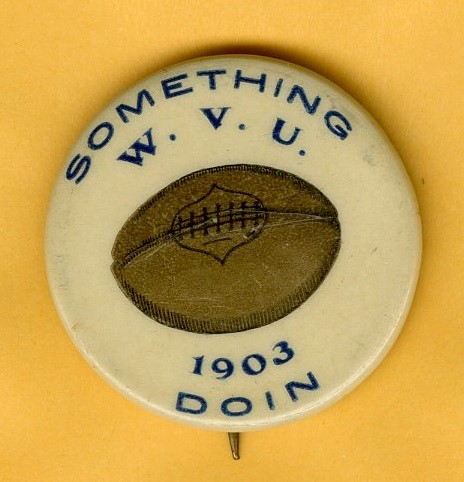 The booster badge on exhibit from 1903 shows the pride of Mountaineer fans when their team, under head coach Harry E. Trout, achieved a 7-1 season, including their first victory over early rival Washington and Jefferson College. 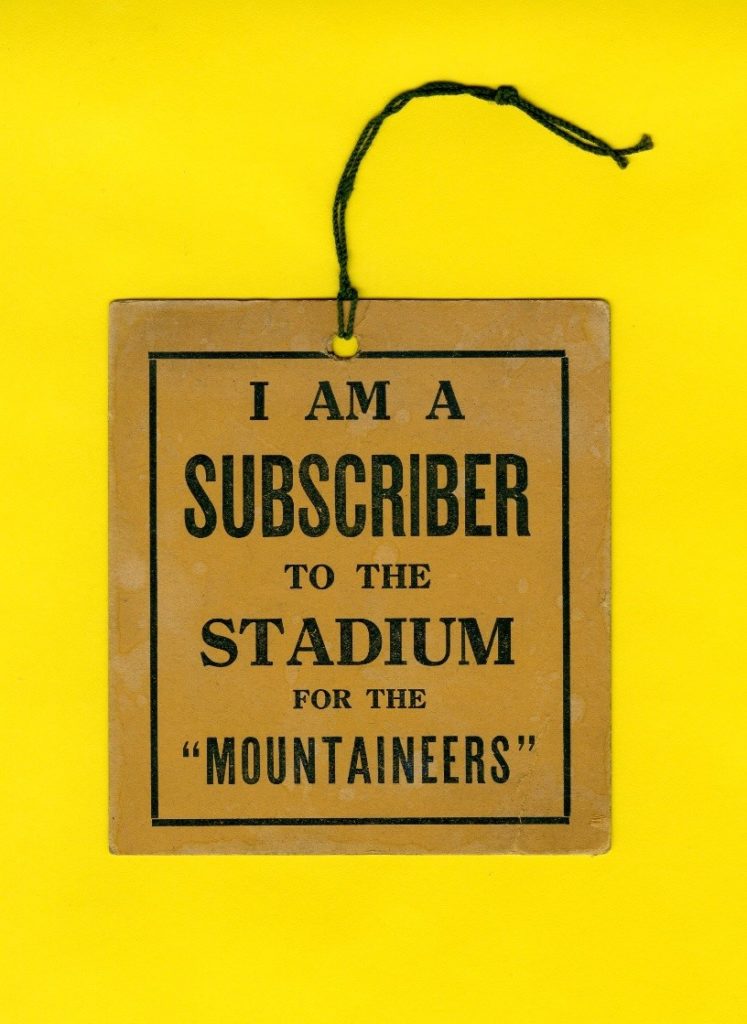 Booster card for construction of the old Mountaineer Stadium below Woodburn Hall, 1924.

A common type of ephemera item in the archives of colleges and universities is the dance card, and there are many in the collection of the History Center, including this early one from 1890, which lists items such as the “Cheerful” Polka and “Clarissa” Quadrille: 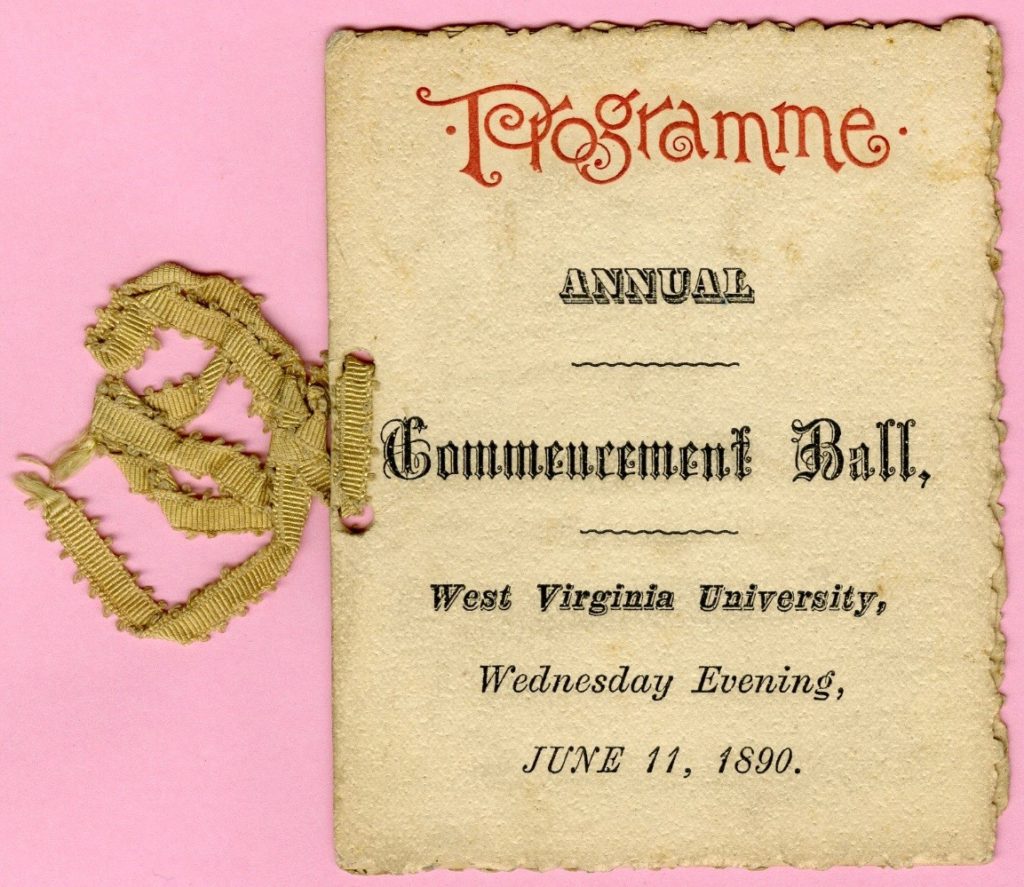 This 1890 social event was even covered by a major state newspaper, the Wheeling Intelligencer: 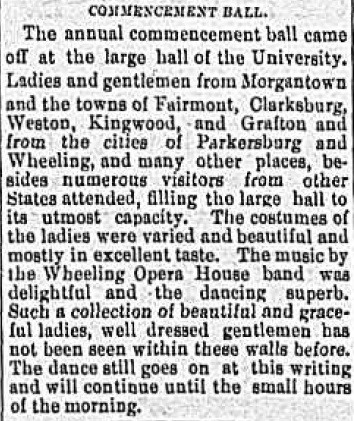 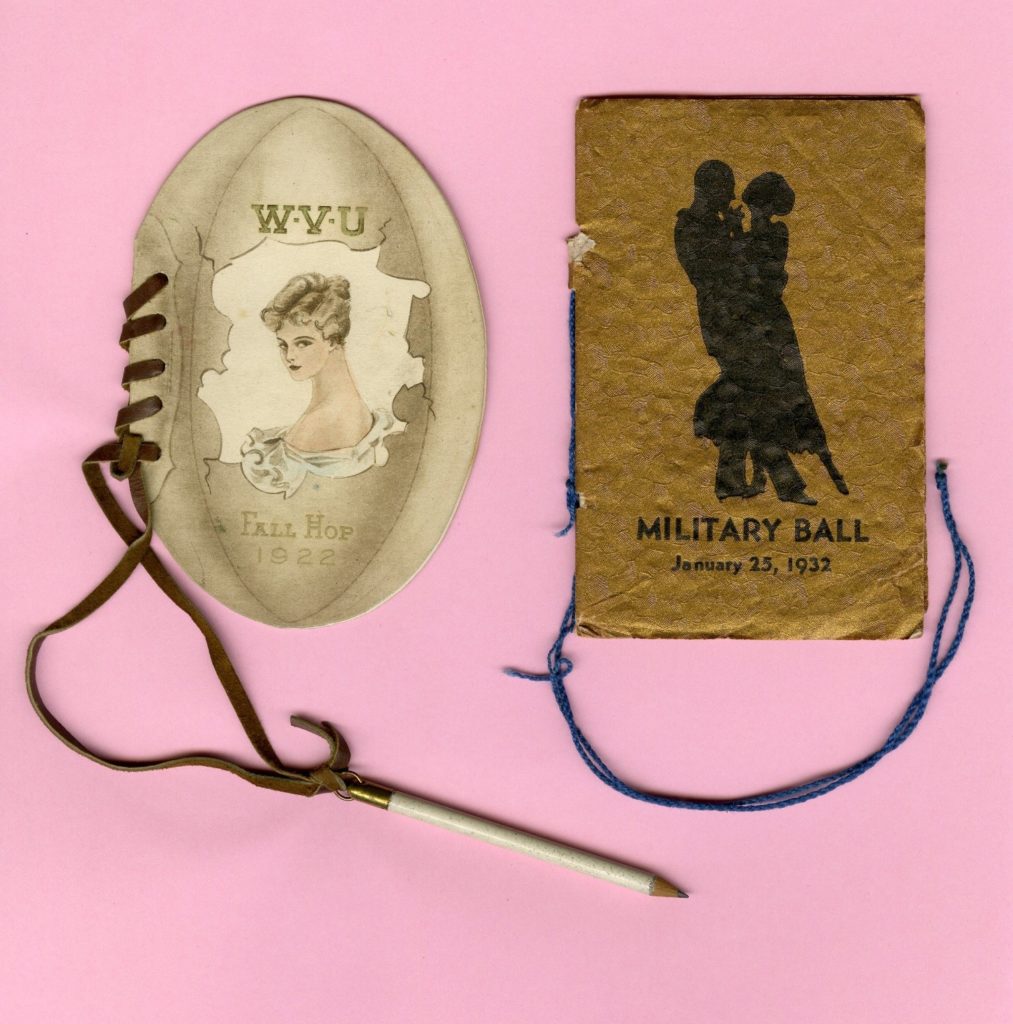 Particularly remarkable in the early days of WVU is how elaborately ornamented commencement announcements were, including these examples from 1875 and 1890: 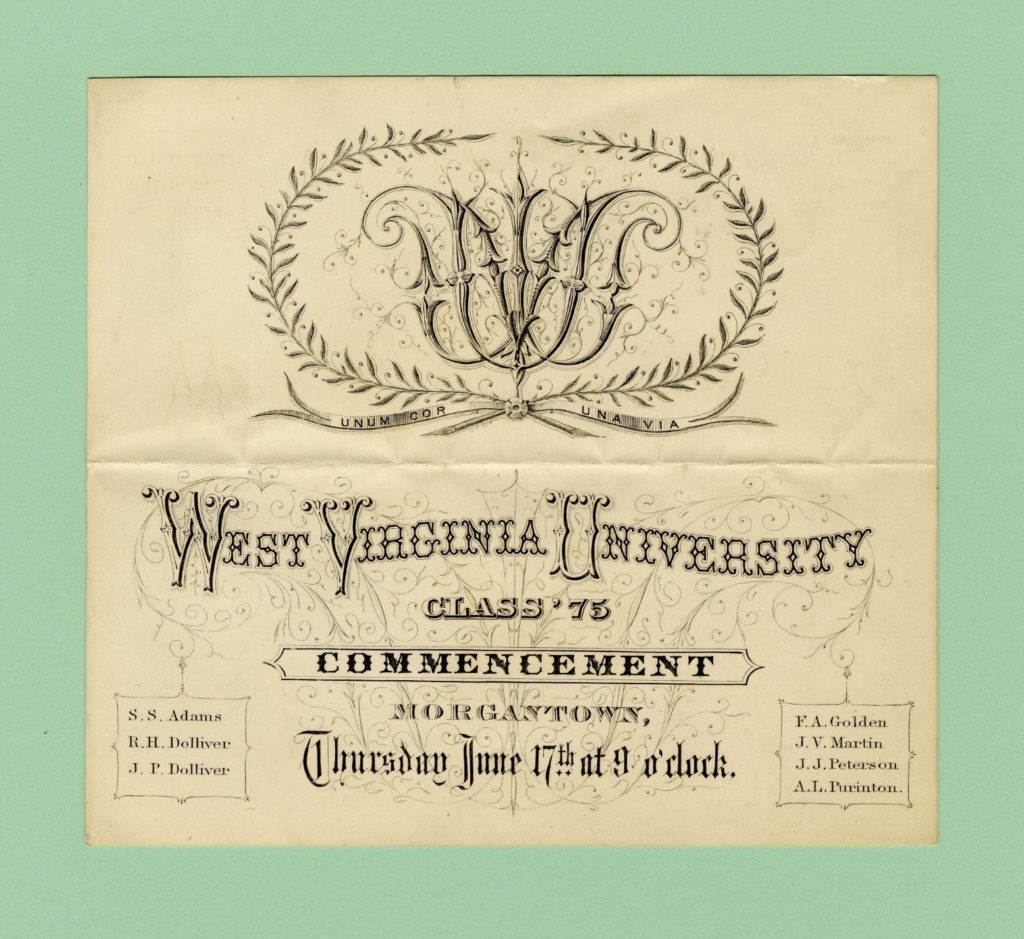 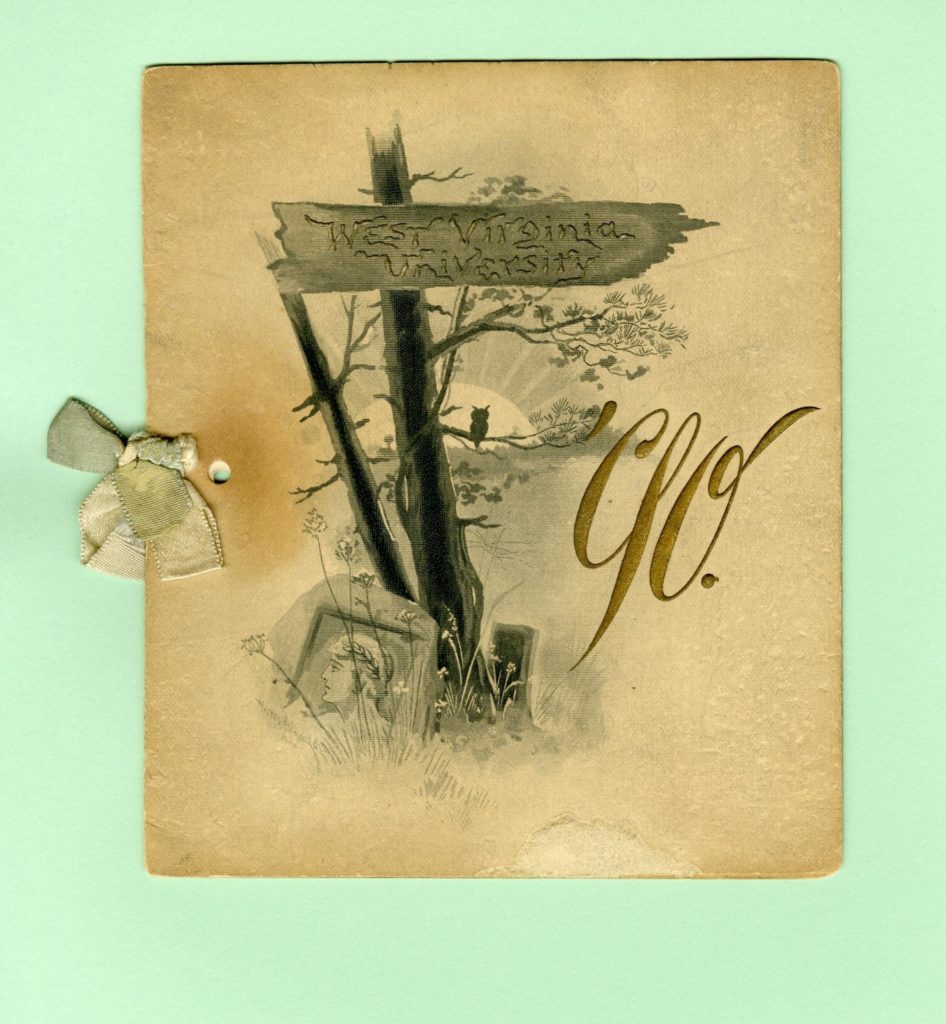 If this exhibit was of interest to you, I recommend checking out the WVU historical photography exhibit at the Alumni Center for a more immersive experience in WVU history.

Sources Consulted:  Collections at the West Virginia and Regional History Center; Wikipedia for article regarding coach Harry Trout; and Chronicling America for news clipping regarding the commencement ball of 1890.