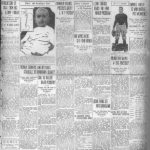 The West Virginia University Libraries’ West Virginia & Regional History Center has received a $210,000 grant from the National Endowment for the Humanities to continue digitizing newspapers published in West Virginia from 1836 to 1922.

The award is the Libraries’ fourth NEH grant as part of the National Digital Newspaper Program. The collaboration between the NEH and the Library of Congress enlists libraries and institutions from around the country to create a digital database of historical United States newspapers.

“We are honored that the NEH recognizes the tremendous value of the historical newspapers archived in the WVRHC,” WVRHC Director John Cuthbert said. “We are thrilled to make more of these resources accessible to the world.

The Chronicling America website provides access to more than 12 million newspaper pages from 1789 to 1924. So far, the WVRHC has contributed 300,000 pages from 39 historic West Virginia newspapers.

The WVRHC holds the most comprehensive collection of West Virginia newspapers, including more than 50,000 reels of microfilm. The collection is the Center’s most frequently consulted resource.

“Newspapers are possibly the most significant single resource for studying the history of civilization since newspaper publishing began. They are a daily chronicle of what is happening in society,” Cuthbert said.

WVRHC Curator Stewart Plein said the grant will enable the Center to digitize 100,000 more newspaper pages. They will focus on a period of significant change with the opening of coalfields and the influx of African-Americans who migrated to West Virginia for jobs, and the expansion of the railroad and the corresponding birth of Huntington as a city developed to serve the exportation of coal.

“African-Americans in Huntington developed and established a self-supporting community within the city that drew on the African American quest for identity, the need for education, the desire to own property, supportive kinship relationships and steady employment,” Plein said.

With the initial $266,000 grant in 2011, the WVRHC began it efforts by focusing on the Wheeling Intelligencer, which they identified as the most significant newspaper of the antebellum and early statehood period. Along with being the only daily newspaper being published in western Virginia at the start of the Civil War, it held anti-slavery and pro-Union stances, and supported the statehood movement.

Over the next six years, the WVRHC received grants of $135,000 in 2013 and $155,000 in 2015 and expanded its scope to include papers from around the state. These additions bring reporting on both sides of the Civil War conflict and pivotal issues and events such as the growing antebellum conflict between eastern and western Virginia, John Brown’s Raid, West Virginia’s statehood movement and establishment, West Virginia’s 1872 Constitution, Reconstruction, and the United States’ Centennial.