As library collections become increasingly digital, West Virginia University Libraries seeks to engage our users and community in our spaces in new ways. One avenue is the Art in the Libraries program, which brings art and collaborative exhibitions into the library buildings to spark discussions and inspire new ideas.

“Having art and exhibits in these publicly used spaces presents a unique opportunity for exhibitor and library guest,” said Sally Deskins, exhibit coordinator for WVU Libraries. “The exhibitor’s work is in a neutral space, a space which preserves and protects new ideas and perspectives, and a space where some who wouldn’t normally seek out art and exhibits, will go.”

Art in the Libraries programming spans the Downtown Campus, Evansdale and Health Sciences libraries. The committee welcomes ideas for collaborative and engaging programs and submissions for exhibition proposals on an ongoing basis.

This spring, a number of new initiatives and exhibits will exemplify the Libraries’ moving forward with the vision of reaching across community and campus with creative projects.

The newly created WVU Faculty/Staff Exhibition Award will highlight the art and scholarship of WVU faculty and staff. The Art in the Libraries committee invites current faculty and staff to submit ideas for an exhibit to visually showcase their scholarship in new and experimental ways, providing a visual evolution of their work, visualizing their research and influences, or answering a research question. One awardee will receive $1,000 as professional development funds and an exhibition including promotion and public programming. The deadline is February 28. More information is available at exhibits.lib.wvu.edu.

The spring calendar is packed with exhibits and events: 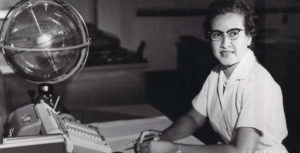 This traveling exhibit on loan from the Hampton History Museum explores the history and personalities of the women featured in Hidden Figures, WVU’s current Campus Read. The exhibit will be on display during January in the Downtown Campus Library Atrium and will move to the second floor of Evansdale Library from Feb. 1-28 and to the Erickson Alumni Center Nutting Gallery March 1-April 28.

In 1935, five women came to Langley to form a computer pool to process all of the data coming in from wind tunnel and flight tests. It began as an experiment but became something much bigger as readers of the book learned. By 1942, the human computers had become essential to operations. Two of the three pioneers featured in the book—Dorothy Vaughan and Katherine Johnson had connections to Morgantown.  Vaughan grew up in Morgantown and attended Wilberforce University in 1925. WVU did not admit African Americans then. Johnson became the first African American woman to attend graduate school at WVU in 1939.

CCA Professor of Photography Michael Sherwin celebrates ten years of teaching the Jackson Hole Photography workshop in an exhibition featuring numerous print and electronic images taken by Sherwin and his students. The exhibit runs through June 2018. Professor Sherwin will present with some of his students on February 15 at 4 p.m. 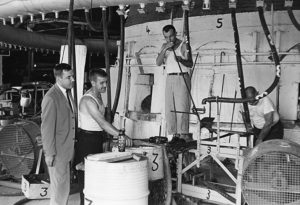 Glassblowing to Community Building is a collaborative exhibit inspired by a proposal from WVU Professor Jenny Boulware’s Local History Research Methodology class in the Department of History. This exhibit provides a brief overview of the Sunnyside neighborhood through photography. Five themes are featured including the industrial era, culture and society, student life, WVU football and the neighborhood we see today.  This exhibit is a collaboration between WVU Libraries, WVU’s Summer Undergraduate Research Experience and the Department of History and with support from the West Virginia and Regional History Center. Photographs will be on display from January through May.

A native of Rupert, W.Va., Max Hayslette has enjoyed a diverse and successful career in the field of art that has spanned nearly seven decades. Included in this display are 18 paintings that show two sides of Max Hayslette; the romantic landscape painter, and the abstract expressionist. While the two styles may seem disparate, for Hayslette they are essentially the same, both resulting from the same intellectual process. Max Hayslette’s generous gift of these paintings to the West Virginia Regional History Center and WVU students, faculty and staff makes this exhibit possible.

West Virginia-born writer Julia Davis Adams began her career as a reporter for The Associated Press in New York City, authored two dozen books, and spearheaded the adoption service of the Children’s Aid Society. Along with being a successful author and philanthropist, she traveled to Russia in 1957. Photographs capturing her trip are archived in the West Virginia and Regional History center. This exhibit displays fourteen paintings inspired by Adams’ trip to Russia and created by West Virginia University advanced painting students of College of Creative Arts Professor Naijun Zhang. They will be displayed through April.

WVU Libraries has invited the WVU Press to present rotating exhibits of their newly released book covers around the 2nd floor of the Downtown Campus Library. WVU Press is only university press and largest publisher of any kind in the state of West Virginia, publishing books and journals by authors from around the world with emphasis on Appalachian studies, history, higher education, the social sciences and interdisciplinary books about energy, environment and resources.

The Rare Books Collection, located on the sixth level of the Downtown Campus Library, contains old and rare books from 1370 to present day. The collection spans areas of literature, history, religion, philosophy, and natural history, reflecting the personal interests of donors who have given their own collections.  This exhibit takes a look at a smaller yet nonetheless unique collection of artists’ books, works of art in book form, all made by hand.  This exhibit includes works by local and regional artists including books created by College of Creative Arts Professor of Graphic Design Eve Faulkes, the late Professor Emeritus Cliff Harvey, photographer Steve Lawson, former WVU Books Arts professor and master typographer Rich Hopkins and others.

The QUESTION is a project designed to inspire inquiry and respectful discussion about big ideas. WVU Libraries is collaborating with THE QUESTION to bring relevant interactive elements to the Art in the Libraries exhibitions, and to a rotating, interactive QUESTION Station outside of Eliza’s at the Downtown Campus Library, and one at the Evansdale Campus Library.

Conversations with Curators, February 13 at 4 p.m., with Stewart Plein, Rare Books Curator, in conjunction with her display cases exhibit around books from the Harlem Renaissance, DCL Lobby

Elaine McMillion Sheldon is a Peabody award-winning documentary filmmaker based in West Virginia. Her work explores universal stories of identity, roots, survival and resilience. Sheldon is the director of “Heroin(e)” a Netflix Original Documentary short that follows three women fighting the opioid crisis in Huntington, West Virginia. In 2013, she released “Hollow,” an interactive documentary that examines the future of rural America through the eyes and voices of West Virginians. “Hollow” received a Peabody and Emmy nomination as well as 3rd Prize in the World Press Photo Multimedia Awards, and it was featured in an exhibit at the WVU Downtown Campus Library 2015-2016. With A Knowing Intimacy, Sheldon reflects on how LA Times described her work with a “knowing intimacy,” and this shared quality among her and the work of West Virginia based photographers Rebecca Kiger, Meg Elizabeth Ward and Lisa Elmaleh. “The things that are left unsaid inform the work in a huge way,” said Sheldon. “Whether that’s our relationship with others, nature, or ourselves. The knowledge we have, that is not often shared on the surface, is the undercurrent that makes our work just that, ours.” The photographs will be on view through April 13 in room 1020. Sheldon’s film “Heroin(e)” will be shown in the Downtown Campus Library on March 8 at 6:30 p.m., followed by a panel discussion with the artists about documenting the lives of women, in celebration of Women’s History Month.

West Virginia based poet Maggie Anderson is the author of five books of poems, including her latest Dear All (2017), and has made outstanding contributions to the preservation of Appalachian culture through her writing. Join us for a reading by Anderson followed by a discussion about the role of poetry in contemporary society.

In conjunction with Looking at Appalachia: Selected Images from 2014-2016, on display at the Downtown Campus Library, the Arts in the Libraries committee is curating a localized exhibit, Looking at Morgantown, to be on view April-August. Looking at Morgantown will include images specific to Monongalia County and the people, places and events that represent the area to the photographer.

To keep up to date, offer ideas, or get a tour visit exhibits.lib.wvu.edu or contact WVU Libraries Exhibits Coordinator Sally Deskins, sbdeskins@mail.wvu.edu.