Snapshots of WVU in the 1960s, Part 1, The Computer Center

Not long ago the History Center received a collection of archival photographs from University Relations that contains images documenting people, activities, and events at West Virginia University from the 1960s to more recent times.  This blog will focus on photos that show the beginning of computing services at WVU.

According to the 1979 guide “Computing at WVU,” computer processing at WVU began in 1958 when the College of Agriculture acquired an electro-mechanical calculator.  But “actual computer use in the modern sense” began in 1960 when an IBM 605 was installed in Stewart Hall, a card programmed electronic calculator.

In March 1963 WVU submitted “A Proposal for Support of a Computer Center” to the National Science Foundation, and on September 1 the first director of the Center was appointed, officially launching the WVU Computer Center.  In 1964 the Center’s IBM 1620 systems were replaced by an IBM 1401 and IBM 7040, a configuration that lasted until 1969. 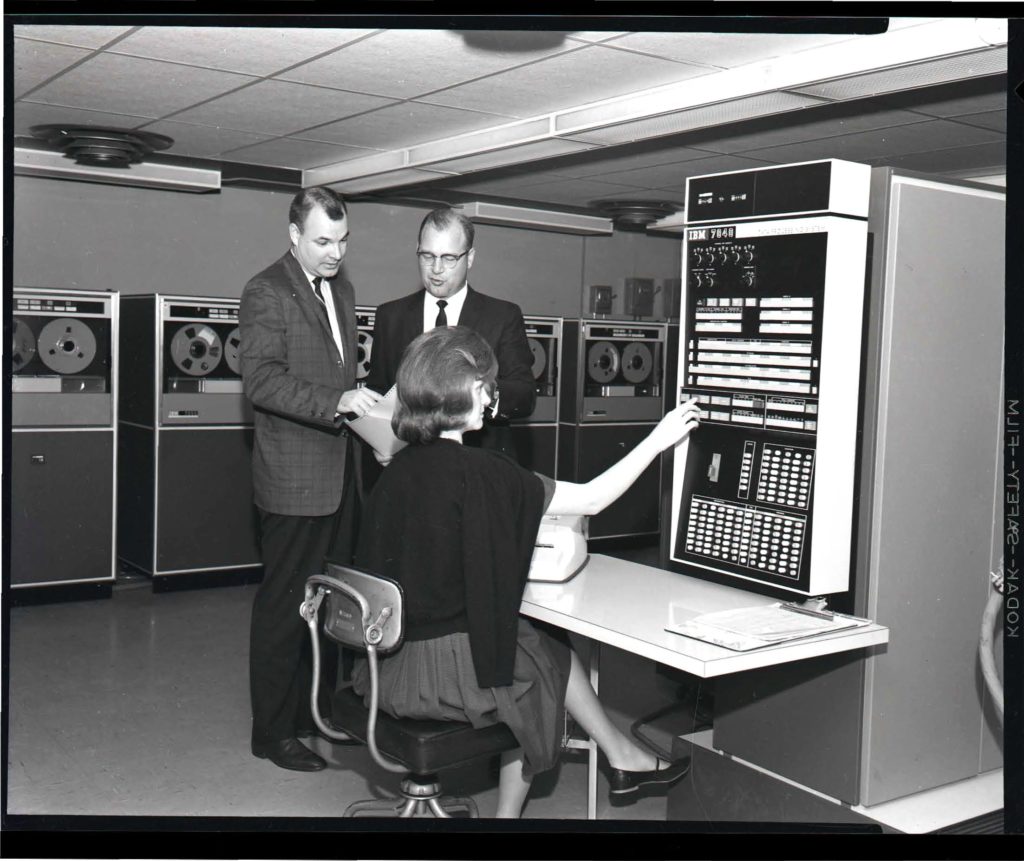 This photo shows what is essentially the beginnings of computing services at West Virginia University in September 1964.  Here we see the control panel of an IBM 7040 in operation, a system that was apparently popular at universities due to its reasonable price.  The identities of the people in the photograph are unknown.  If anybody in the campus community can identify them, please share that information with us so we can enhance our cataloging and preserve the historical record.  (Photograph from A&M 5188, West Virginia University, News Service, negative file 00045.) 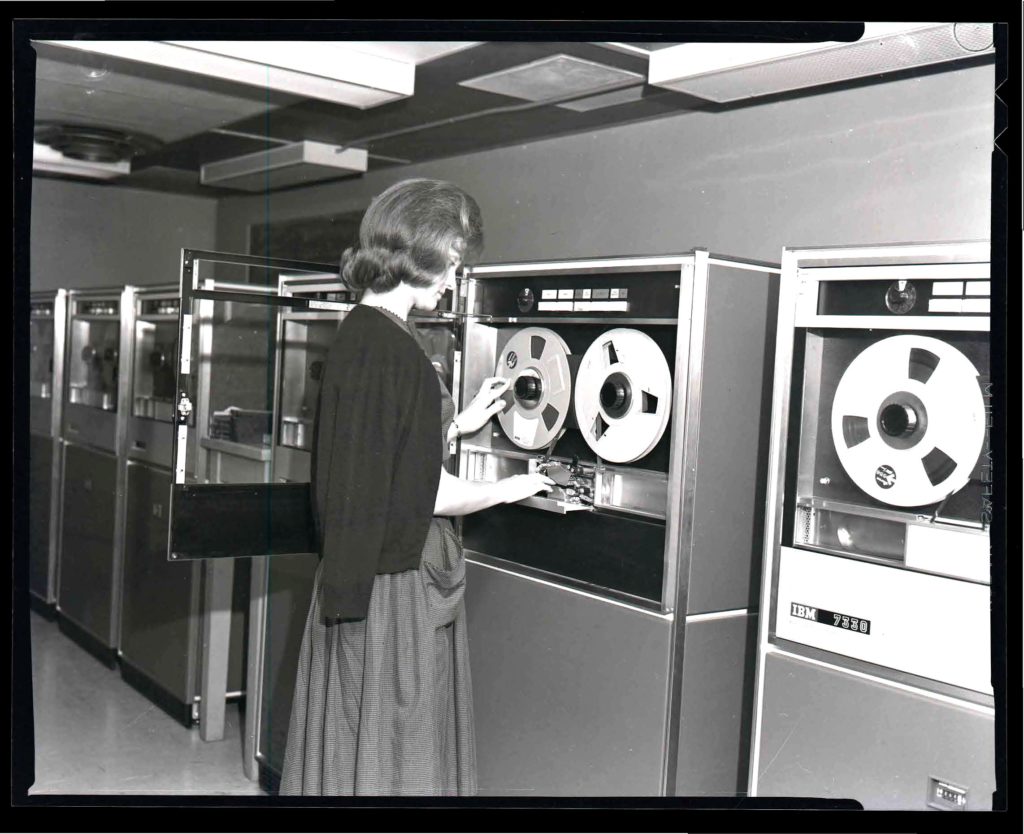 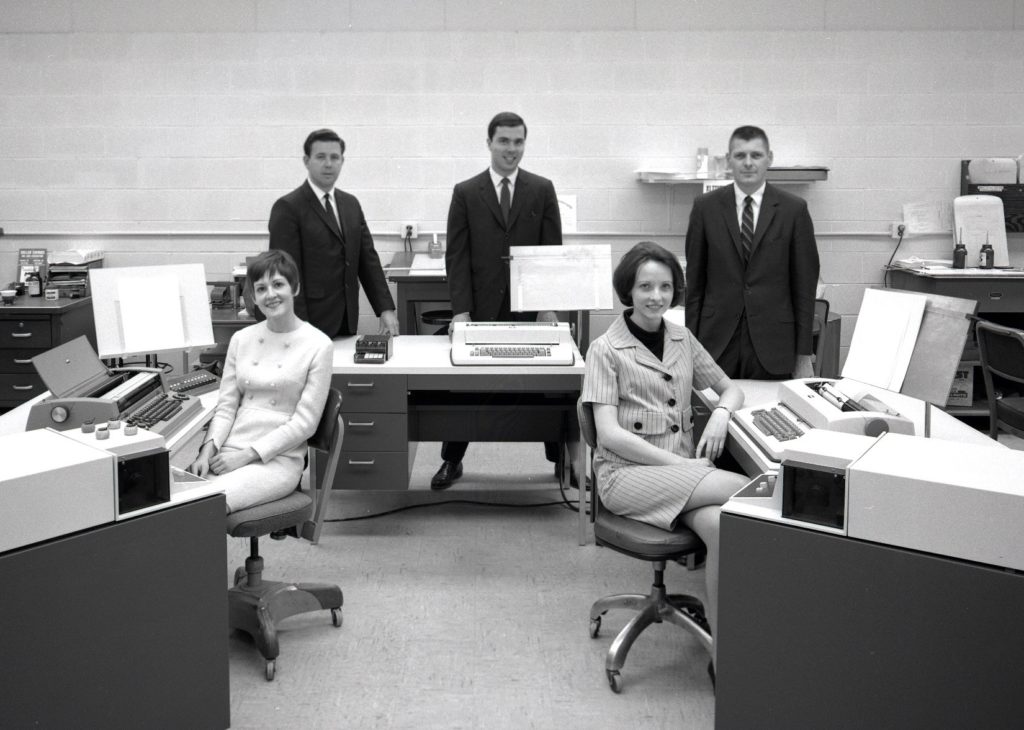 This photograph was shot in May 1968 to commemorate the installation of equipment for a “printing composing room.”  The individuals are unidentified.  (Photograph from A&M 5188, West Virginia University, News Service, negative file 00884.) 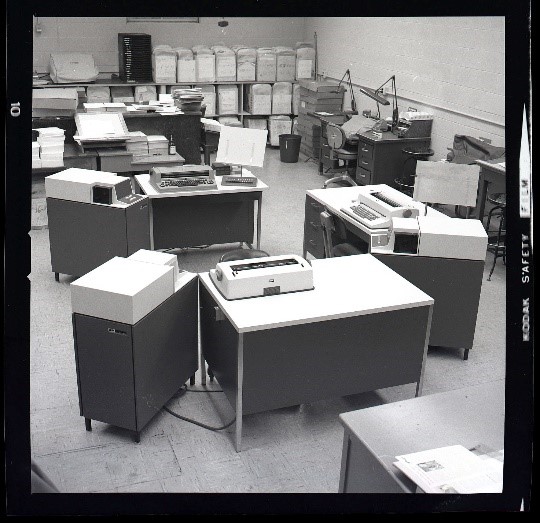 This image provides an overview of the configuration of the “printing composing room” in May 1968.  (Photograph from A&M 5188, West Virginia University, News Service, negative file 00885.)

In 1969 WVU Computing Services moved up to an IBM 360, which included 512K bytes of “high speed core storage.”  The 360 was a marketing success, since it was a family of mainframe systems that allowed users to migrate from small to large without having to reprogram, or replace peripheral devices.  Sold between 1965 and 1978, this type of system established a new paradigm in computing that facilitated future migration, as of course happened at WVU and other institutions as computer technology evolved. 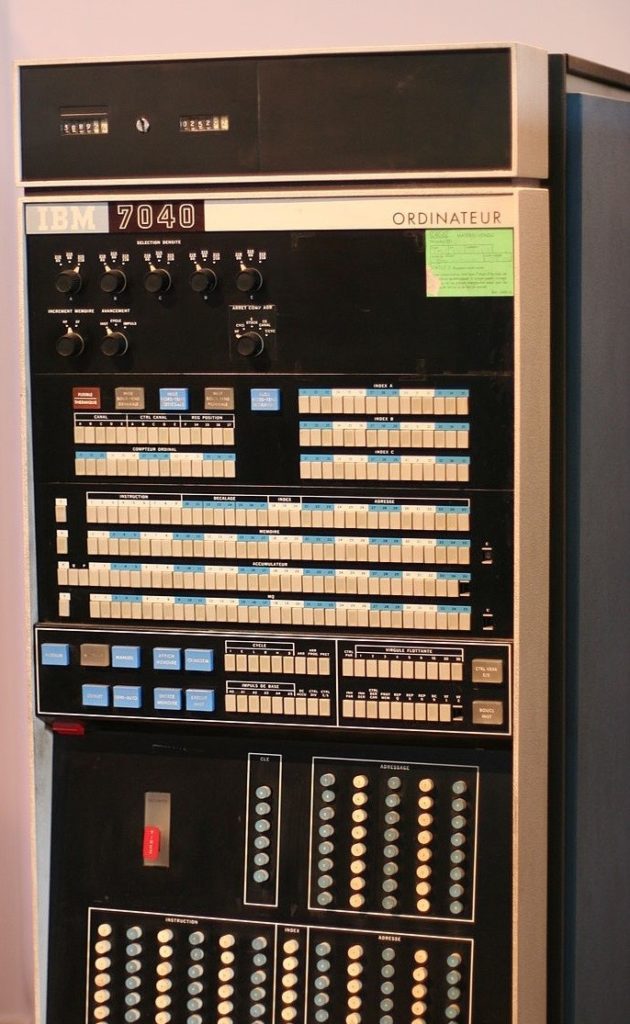 Control panel, in color, of the IBM 7040.
(Photograph from Wikipedia.)