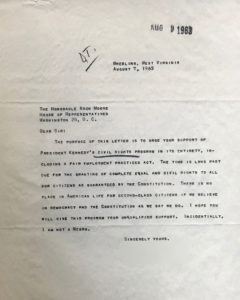 Constituent correspondence in both paper and digital formats can play an important role as Congress considers legislation and can be found in archives across the country. This letter is an example of materials preserved in the WVRHC.

Since the late 1970s, constituent correspondence has moved from paper to digital formats, and archives across the country now receive correspondence as data exports. WVU Libraries has developed an innovative open-source system that could make access to the data possible.

The LYRASIS grant will support a feasibility study that will assess the WVU Libraries’ open-source system and engage the congressional archives community to develop a roadmap for creating a cooperative, data sharing infrastructure.

“We are honored that LYRASIS selected this project,” said Danielle Emerling, West Virginia & Regional History Center assistant curator and the grant’s principal investigator. “Constituent data sets have great potential for numerous research inquiries, analysis, and visualizations, and we’re excited to be one step closer to making the data available to researchers.”

Constituent correspondence with Congress provides unique opportunities to explore the perspectives of everyday Americans about issues affecting their lives. The data offers a look at public opinion in any given state or district and enables evaluations of the influence of public opinion on elected officials. It vividly illustrates the representative function of an office, particularly to underrepresented constituent groups whose voices are often absent from the historical record.

The WVRHC holds constituent correspondence data sets in the collections of Senator John D. (Jay) Rockefeller IV and Congressman Nick Joe Rahall II. Through the grant, WVU Libraries will collaborate with congressional archives professionals at the University of Delaware, Drake University, the University of Montana, the University of Nevada Reno, the Richard B. Russell Library for Political Research and Studies at the University of Georgia, and the United States Senate Historical Office. Additionally, members of the Association of the Centers for the Study of Congress and the Society of American Archivists’ Congressional Papers Section will participate.

LYRASIS, one of the nation’s largest non-profit member organizations serving archives, libraries, and museums, awards the Catalyst Fund to foster innovation among members and knowledge communities worldwide. This year, six projects were chosen by participants in the LYRASIS Leaders Circle and $155,000 will be awarded.