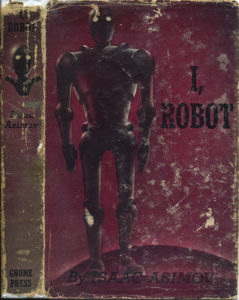 This first edition of “I, Robot” is preserved in the Libraries’ Isaac Asimov Collection.

Before lighting a jack-o-lantern or donning a Halloween costume, plan to attend West Virginia University Libraries’ Isaac Asimov exhibit and lecture on October 31 from 2-3:30 p.m. in the Downtown Campus Library Atrium.

“An Afternoon with Asimov” will provide a glimpse into the Libraries’ extensive Isaac Asimov Collection and insight into the prolific science fiction author’s body of work. Andy Duncan, a Frostburg State University English professor, will open the event with a talk titled “The New Futurians.”

“Asimov was one of the original Futurians of the 1930s and 1940s, who insisted that science fiction was a vehicle for politics, a means of changing the world for the better. A fringe opinion then, the Futurian ideal today is central to the genre, as the 2018 Hugo ceremony demonstrates,” Duncan said. “Where this leaves Asimov and his reputation in the 21st century is a puzzle his positronic robots might have appreciated.”

Asimov (1920-1992) is widely considered one of the greatest science fiction writers of the twentieth-century. Readers crowned him “The Great Explainer” because he made complicated subjects easy to understand.

Probably best known for the science fiction classic “I, Robot,” which introduced the “Three Laws of Robotics,” and his “Foundation” trilogy, Asimov penned or edited more than 500 books and produced, designed and narrated an array of science games, videos, slideshows, artworks, sound recordings and more.

The Libraries’ Rare Book Room, located in the West Virginia and Regional History Center, preserves one of the most complete collections of Asimov’s work in existence, numbering well over 1,000 items, including games, wall charts, audio and video recordings and related memorabilia.

“I am very proud that WVU is home to one of the world’s largest collections of Asimov’s materials, thanks to the generosity of Larry Shaver and Carlos Patterson,” said Jay Cole, senior advisor to WVU President E. Gordon Gee. “The collection inspired me to teach an honors course on Asimov’s science fiction and then write a guest editorial that appeared in Asimov’s Science Fiction Magazine about that course. I hope this event will draw even more attention to our Asimov collection and its value as a teaching resource.”

The exhibit will showcase several Asimov first editions, sci-fi artwork from the 1950s, an LP of William Shatner, Star Trek’s original Captain James T. Kirk, reading one of his stories and other interesting items.

In his presentation, Duncan will bring the perspective of a teacher and also an accomplished writer. His short fiction has won a Nebula Award, a Theodore Sturgeon Memorial Award and three World Fantasy Awards. His third collection, “An Agent of Utopia,” will be published by Small Beer Press in November.

He is on the board of directors of the Science Fiction and Fantasy Writers of America. In summer 2019, he will be on the faculty of Clarion at UC-San Diego, his fourth time teaching that famed speculative-fiction workshop.

Duncan tweets under the handle @beluthahatchie and lives with his wife, Sydney, a professor English at FSU, in western Maryland.