Celebrating Shakespeare and the First Folio

O, how this spring of love resembleth
The uncertain glory of an April day,
Which now shows all the beauty of the sun,
And by and by a cloud takes all away.

This quote from Shakespeare’s play “The Two Gentlemen of Verona,” (Act I, Scene 3, lines 85-88), describes just what the poet T.S. Eliot was thinking when he described April as “the cruelest month.”  That may be true, but for lovers of Shakespeare, April is the month of his birth, and also his death.  Though the dates of Shakespeare’s birth and death cannot be established with any certainty, April 23 is considered the likely date for both events.  The only extant record that comes close to recording his birth date is a baptismal notice for April 26, 1564.  His passing is believed to have taken place on April 23, 1616.  It is entirely possible that the same date applies to both life events.

These lines are from his most famous work, the collected plays, titled Mr. William Shakespeare’s Comedies, Histories, & Tragedies, published seven years after his death in 1623.  Known colloquially as the first folio, it is considered to be the most important work ever published in the English language. 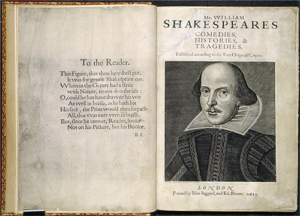 The preface, “To the Reader,” appears in the format of a poem written by Ben Jonson, a colleague of Shakespeare, and a well-known playwright, whose plays were the first to be printed “in folio.”  What does printing “in folio” actually mean?  The word “folio” simply refers to the size of the paper used.  A folio is printed on a large size paper.  This was very uncommon for the publication of plays, which were usually printed in a smaller size, called a quarto.  Jonson’s collected plays were the first to be printed “in folio,” and this had a huge influence on the publication of Shakespeare’s plays in the same size. 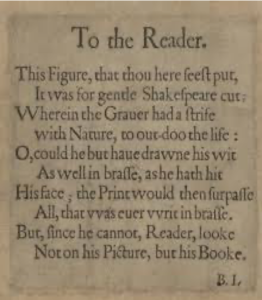 This figure, that thou here sees put,
It was for gentle Shakespeare cut;
Wherein the graver had a strife
With nature, to outdo the life:
O, could he have but drawn his wit
As well in brass, as he has hit
His face, the print would then surpass
All, that was ever written in brass.
But, since he cannot, Reader look
Not on his picture, but his book.

We can see that the text of this preface, above, looks very different than today’s English.  The English language is in transition at this time.  Spelling and letterforms have yet to be standardized.  We see things here that we don’t recognize, such the “long s,” which looks like an “f” without the crossbar, the interchangeable use of letters “u” and “v,” and the ligature of the letters “ct,” to reinforce the sound they make when spoken.  These lines, the modern translation is on the right, have an important purpose, they describe the portrait of Shakespeare on the title page.  It is considered to be the only portrait of Shakespeare created during his lifetime.  It is an engraving by the artist, Martin Droeshout, who was known as a “graver,” taken from the word “engraver.”  The engraving is cut onto brass which was used for printing.  Since Shakespeare had been dead seven years, and many people did not know him, Jonson’s message and the portrait is important.  Yes, the portrait is good, but it can’t capture his wit, move on, read the book!

Shakespeare wrote his plays specifically for the King’s Men, a group of actors who performed exclusively at the Globe Theater.  Not only did he write the plays they performed but he acted in them as well.  It was this group of actors that brought the collected plays to the printers, William Jaggard and his son Isaac, to be published.  Without them, we would not know eighteen of Shakespeare’s plays, including my favorite, Macbeth. The Tempest, Twelfth Night, Measure for Measure, and Julius Caesar, among others, would be lost.  All of these plays would remain unknown to us without this book. 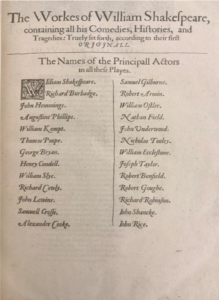 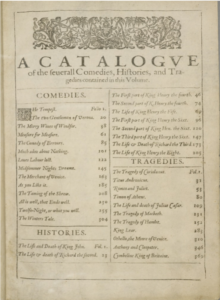 The names of all the actors that appeared in the King’s Men is printed on the page on the left.  Shakespeare himself gets top billing.  John Hemmings and Henry Condell are the actors who led the charge to publish Shakespeare’s collected plays.  They are also responsible for organizing the plays under the categories of histories, comedies, and tragedies, as shown on the catalogue or contents page on the right.

This is the book that made Shakespeare what he is to us today.  West Virginia University’s West Virginia and Regional History Center rare books collections owns all four of Shakespeare’s folios, thanks the generous gift of Arthur Dayton’s Shakespeare collection, given by his wife, Ruth, in 1951.  Dayton, a WVU alumnus, was a passionate collector whose goal was to acquire all four of Shakespeare’s folios. These books are among the most prized in the rare books collection.  The folios are regularly made available to students and faculty for use in classes in the rare book room and these are some of the facts I share with students when they visit the rare book room.  Thanks to Mr. Dayton’s gift, Shakespeare’s folios have educated generations of students at WVU and will continue to do so for future generations. 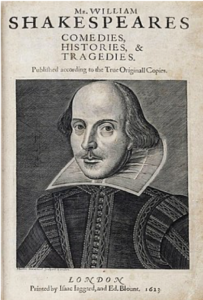 If you’d like to learn more about Shakespeare and the first folio, I highly recommend The Making of Shakespeare’s First Folio, by Emma Smith.  Smith’s book is written in a manner that informs scholars and interested readers alike.