Discovering World War I at the History Center, Part 1: The John A. Thorn Collection

A century has passed since the participation of the United States in the First World War in 1917-1918, and of course West Virginians volunteered, like so many other Americans, after declaration of war on April 6, 1917.  A recent acquisition of the History Center, including letters and photographs, details the war odyssey of West Virginian John Thorn of the 462nd Aero Squadron.

There were numerous squadrons in the Air Service of the United States Army, and in addition to combat, they also performed duties of training, ground support, and construction.  The 462nd was a construction squadron in which John Thorn served as a master electrician.  The letters in the recently acquired John Thorn collection, A&M 4254, show him training in Texas in August of 1917, traveling through England in October, and finally serving in France in the month of November to build barracks, shops, and hangars at the Third Aviation Instruction Center.  Located in Issoudun, the Center was the largest airbase in the world at that time, encompassing 50 square miles of multiple airfields and facilities.  United States airmen were trained here prior to their deployment for aerial combat on the Western Front, including fighter pilots like Eddie Rickenbacker, Frank Luke, and others. 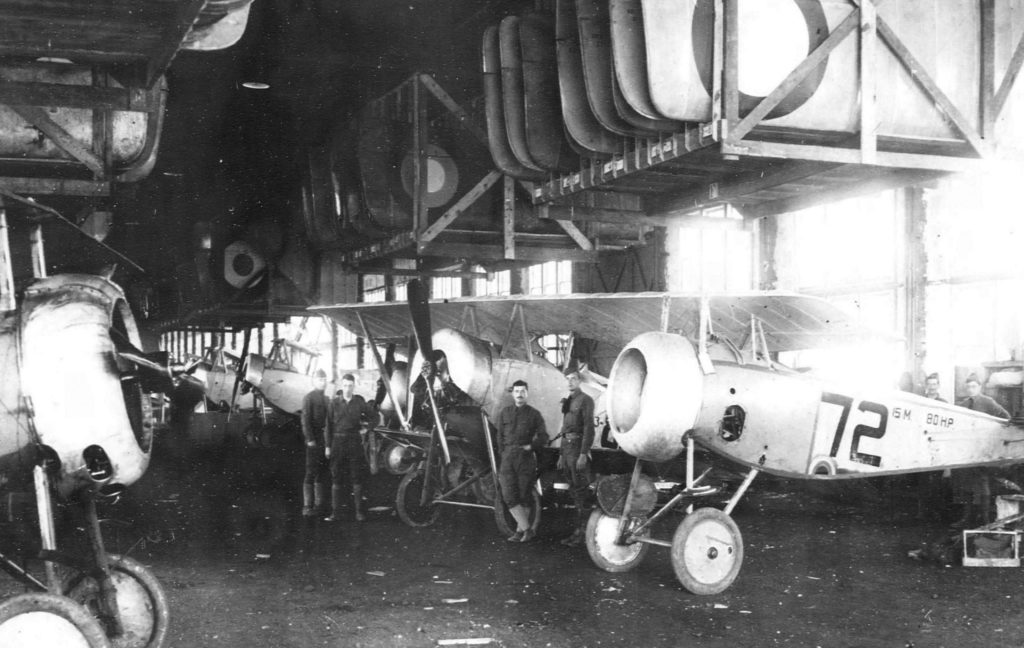 Thorn’s letters during the war were censored so they mention little regarding the conflict and the specific activities of his unit at the Center and elsewhere.  Censorship immediately after the war, however, was apparently less severe as evidenced by the content of the letters.  And since surviving photographs in the collection mostly or entirely document the post-war era, this blog will focus on his experiences during allied occupation of the Rhineland after the armistice. 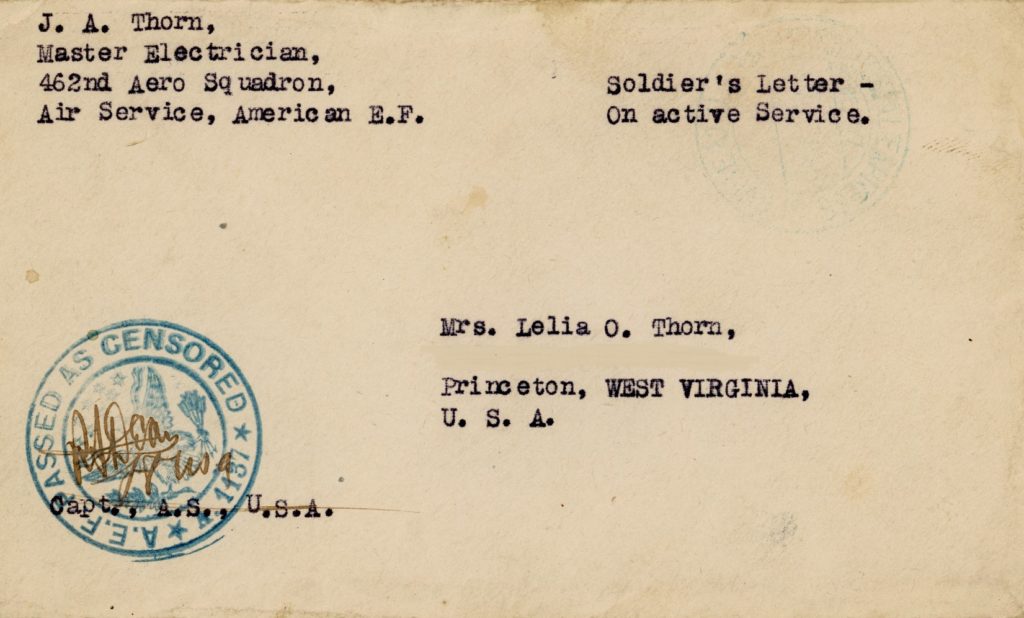 After the war the 462nd was initially assigned to occupy the city of Trier on the Moselle River, but soon moved to Koblenz in the American occupation zone.

In a letter to his mother of 5 December 1918, Thorn reports on how the civilians of Trier were treating the soldiers:

“The civilians have certainly treated us royally since we came.  We are billeted in some of the finest homes in the city, and the people are eager to make every sacrifice and do everything possible for our comfort and convenience.  I am sleeping in a room with a private family, and such fixtures and finishing I have never seen the equal to.  Electric lights, baths, running water, and a big feather bed all to myself that I almost get lost in at night.  We can’t understand why the people seem so friendly to us, but it has France beaten in every respect for hospitality.  We are all on our guard, however, and the last thing I do before going to bed is to place my loaded pistol under my pillow, as do the other boys.  Don’t think we will be here more than two or three weeks longer.”  (Letter from A&M 4254, West Virginia and Regional History Center.)

Thorn’s photographs of some of the German civilians he was acquainted with seem to corroborate the observations of his letter, like this one of local children: 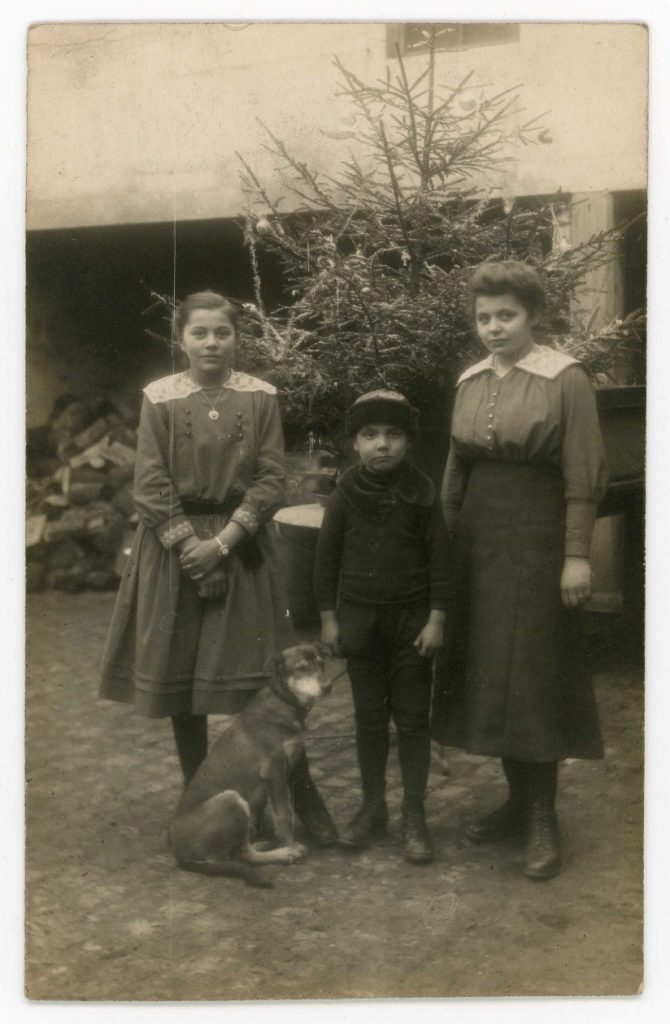 “Treves [Trier], Germany — Dec. 25/18 — Three children of the old man who owns the building in which our office & hqrs. are located”.
(Photograph from A&M 4254, West Virginia and Regional History Center.)

These same three children, without their pet dog, joined some of the soldiers of the 462nd for a group portrait during the holiday season: 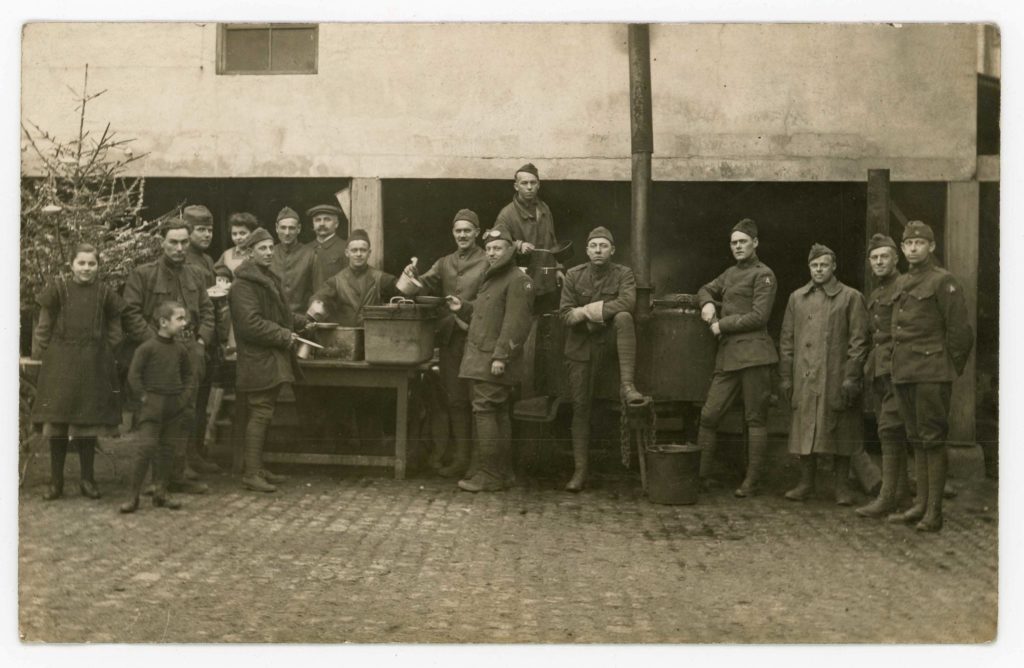 The civilian home serving as unit headquarters, noted on the back of the picture of the three children, was also the subject of one of Thorn’s photographs, although someone else was holding the camera: 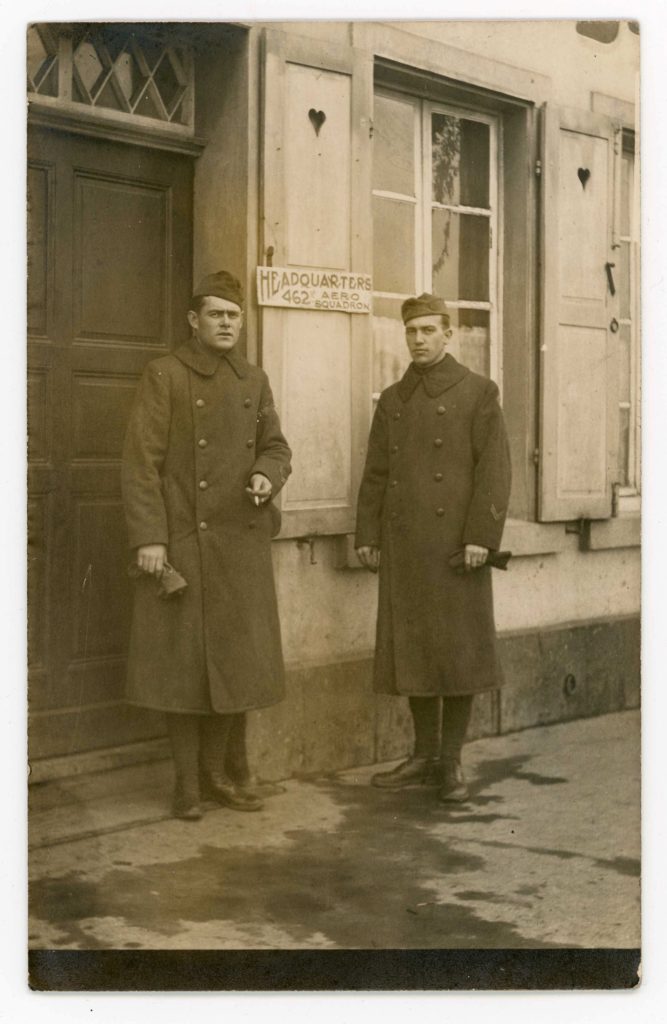 In this photograph, John Thorn is on the right.
“Treves — Germany — Taken in front of our Hqrs., just before starting to the city, Dec. 30/18 — The other fellow is our Top Sergeant”.
(Photograph from A&M 4254, West Virginia and Regional History Center.)

This inscription on the back of the headquarters photo suggests his intention to sightsee, as mentioned in his letter of 5 December:

“This [is] one of the most picturesque cities I have ever seen.  It is the oldest city in Germany, and before the war had a population of 200,000.  The population now is only about 55,000.  I haven’t had time to do much sight-seeing but there are old ruins about the city which date back to the time of Christ.  Many of the buildings and bridges now in use were built by the Romans.  The city’s chief products are steel, pianos and glassware.”  (Letter from A&M 4254, West Virginia and Regional History Center.)

The same letter also refers to the effects of the worldwide 1918 flu pandemic back home:

“It’s very sad about all the deaths in town recently, and I do hope you will manage to escape the epidemic of influenza.  So many of my Welch friends have died that I can scarcely realize it, and am sure the place will not seem the same when l go back.”  (Letter from A&M 4254, West Virginia and Regional History Center.) 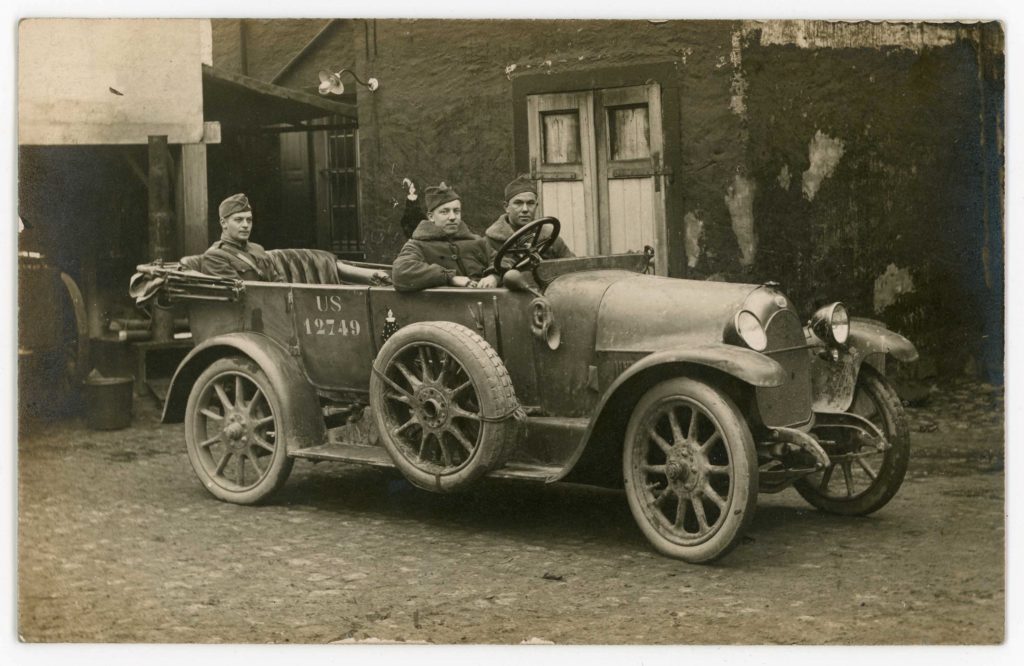 “Capt. Cobb, our commanding officer, his chauffeur and one of his assistants.
— Dec. 26/18 — Treves, Germany.”
(Photograph from A&M 4254, West Virginia and Regional History Center.)

Finally, the letter of 5 December also included an enclosure, an extract from “General Orders Number 29” issued after the armistice on 21 November 1918:

4. 462nd Aero Construction Squadron, during the advance of our troops in the St. Mihiel and Argonne-Meuse offensives, constructed five airdromes on the retaken territory with such alacrity as to enable our flying squadrons to carry on operations without delay. 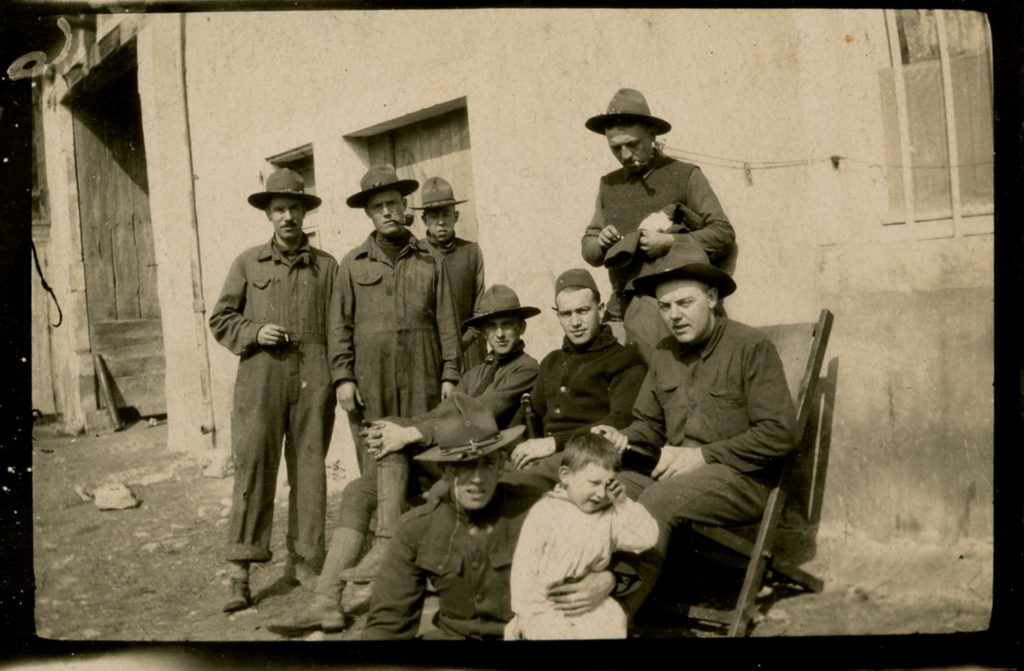 “Some of our comrades in front of a French billet [with] our ‘adopted’ orphan.
The bottle in my lap is empty — we used it to feed a pet pig.”
John Thorn is wearing a brimless hat, undated.
(Photograph from A&M 4254, West Virginia and Regional History Center.)

3 Responses to 'Discovering World War I at the History Center, Part 1: The John A. Thorn Collection'