One of the treasures at the Libraries’ History Center is a collection of original World War I propaganda posters, mostly American, acquired in the 1960s.  Their eloquence in communicating a message through text, composition, and coloration is testimony both to the urgency of their purpose, to convince Americans to support the war, and to the more limited channels of communication available at that time, since print media was a primary means of communication.  Television and the internet had yet to be invented, and radio was only in its infancy.  For example, one of the earliest radio stations, KDKA in Pittsburgh, began broadcasting in 1916.  It is in this context that it becomes comprehensible to us today why the method of distributing posters to the American public was a focus of the federal government’s efforts to advance its agenda, one of garnering public support for involvement in an European war.

In 1917 the public information committee of the U.S. government formed a Division of Pictorial Publicity to be headed by George Creel, who in turn asked Charles Dana Gibson, one of the most famous American illustrators of the period, to join in his efforts.  As president of the Society of Illustrators, Gibson was able to enlist the assistance of the most successful and talented graphic artists of the era.  Since the names of these artists were incorporated into the designs of the posters, one can easily discover the profusion of talent harnessed by the public information committee to deliver the government’s message.  The posters in our collection, consequently, not only resonate historical themes, but also bear witness to an artistic legacy of American illustrators.  Some of the notable artists represented in our collection include Arthur William Brown, Howard Chandler Christy, Neysa McMein, and Edward Penfield. 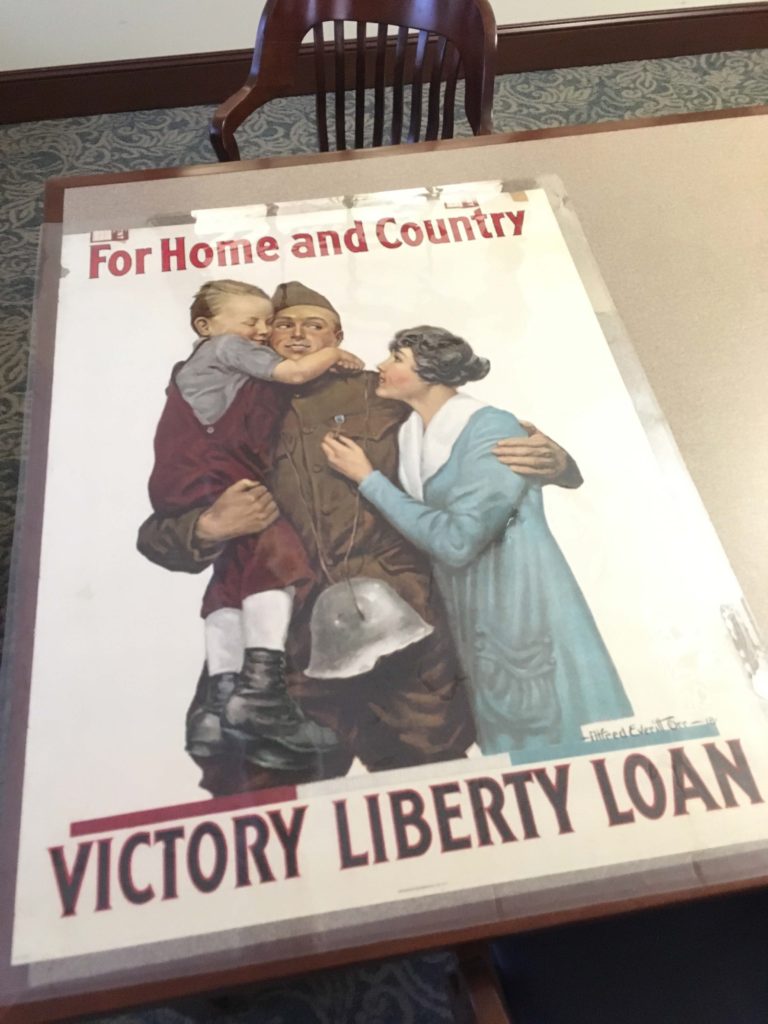 In addition to their pictorial design, the large physical size of World War I propaganda posters was in itself a significant contributing element to their effectiveness in gaining the attention of a viewer, and possibly their support for a cause.  To help convey the scale of these artifacts, the photograph above juxtaposes one of our posters with a table and chair in our manuscripts reference room.  As can be seen, the poster occupies virtually the entire width of the table!

This blog will focus on nine posters regarding themes of the Liberty Bond, Victory Liberty Loan, United War Work Campaign, and recruitment for the Woman’s Land Army.

After declaring war on Germany on 6 April 1917, the United States government initiated bond drives to literally invest the American public into the allied war effort.  Known as “Liberty Bonds,” these securities were issued four times in the period 1917-1918 with yields of around three to four percent each.  The History Center’s collection includes a striking exemplar of a Liberty Bond poster: 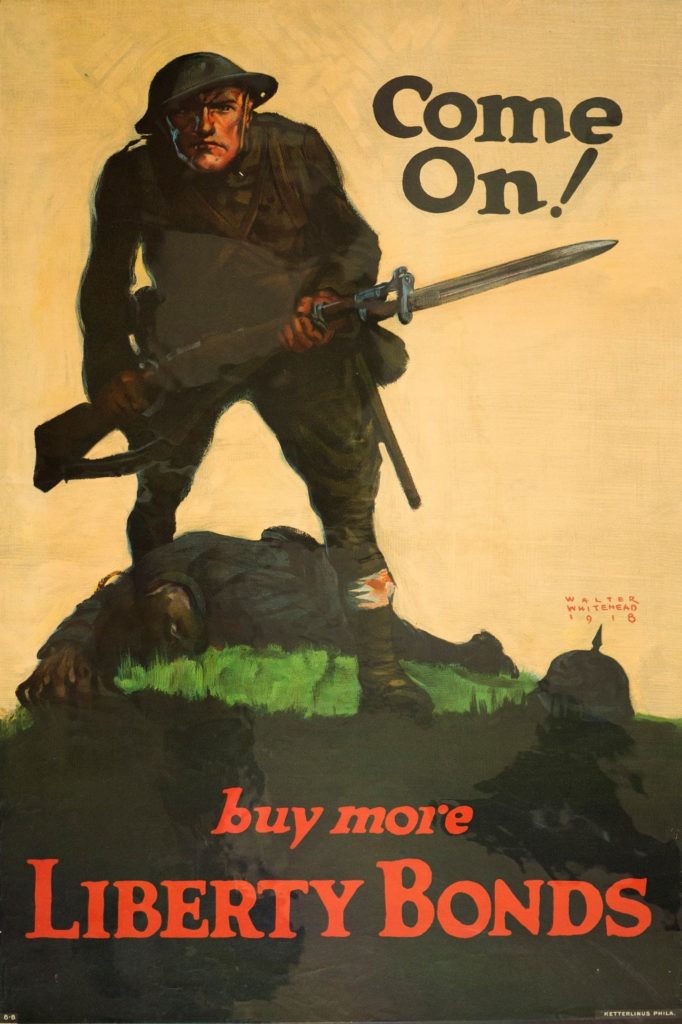 A fifth bond, issued in April 1919 after the allied victory in November 1918, was known as the “Victory Liberty Loan.”  They yielded 4.75 percent after four years.  In addition to the “For Home and Country” poster pictured above, our collection includes other posters for this bond campaign: 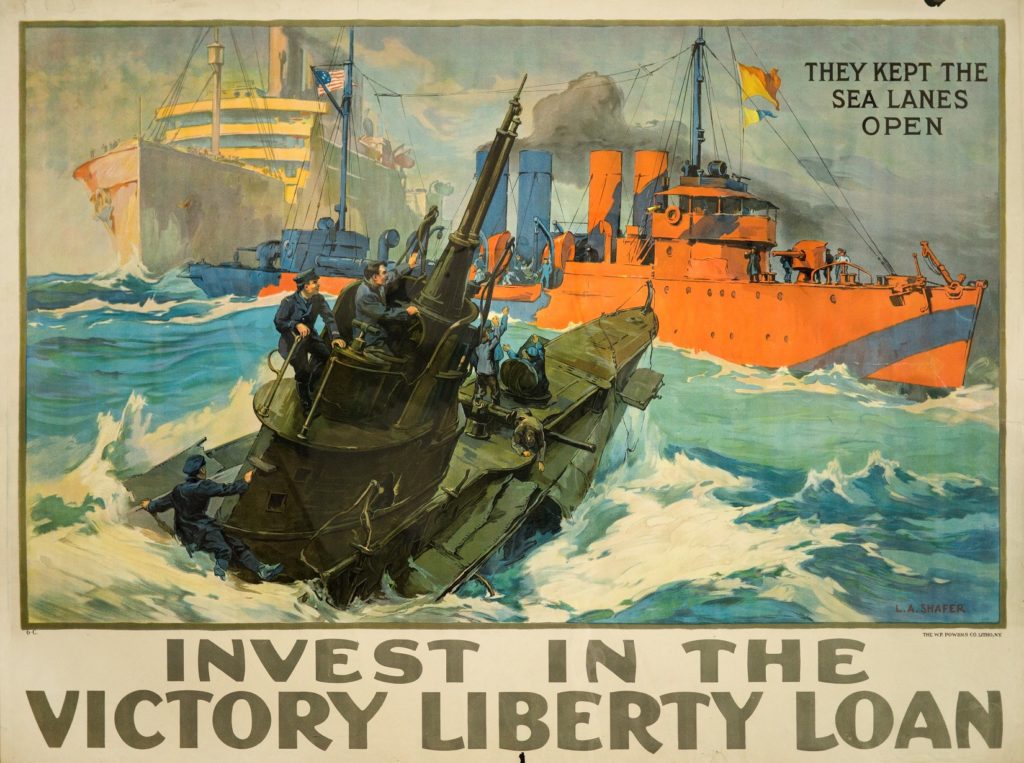 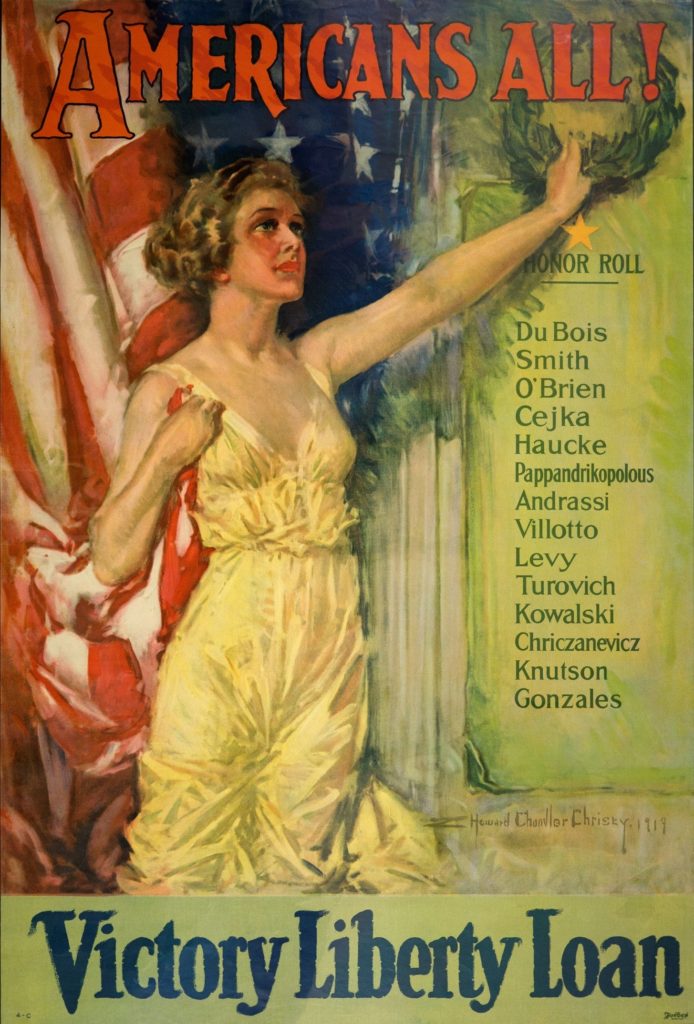 In addition to the “Liberty Bond” campaign to support the military effort, there was also a “United War Work Campaign” to support non-military services through organizations that boosted the morale of troops, including the American Library Association, Jewish Welfare Board, Knights of Columbus, the Salvation Army, War Camp Community Service, Young Men’s Christian Association (YMCA), and Young Women’s Christian Association (YWCA).    Initiated by US President Woodrow Wilson for the period of 11-18 November 1918, this campaign aspired to raise $170,000,000 to sustain support of these services in the immediate post-war period.  The services provided by the YMCA alone, for example, included operation of 26 R&R centers that accommodated 1.9 million American officers and men, maintenance of 4000 “huts” for recreation and religious services, mobilization of 1470 entertainers to perform for the troops, and operation of 1500 canteens and post exchanges within military guidelines, among other amenities.

The “United War Work Campaign,” like the other fund raising campaigns documented here, was advocated to the public through posters.  Our collection at the History Center includes several examples of these: 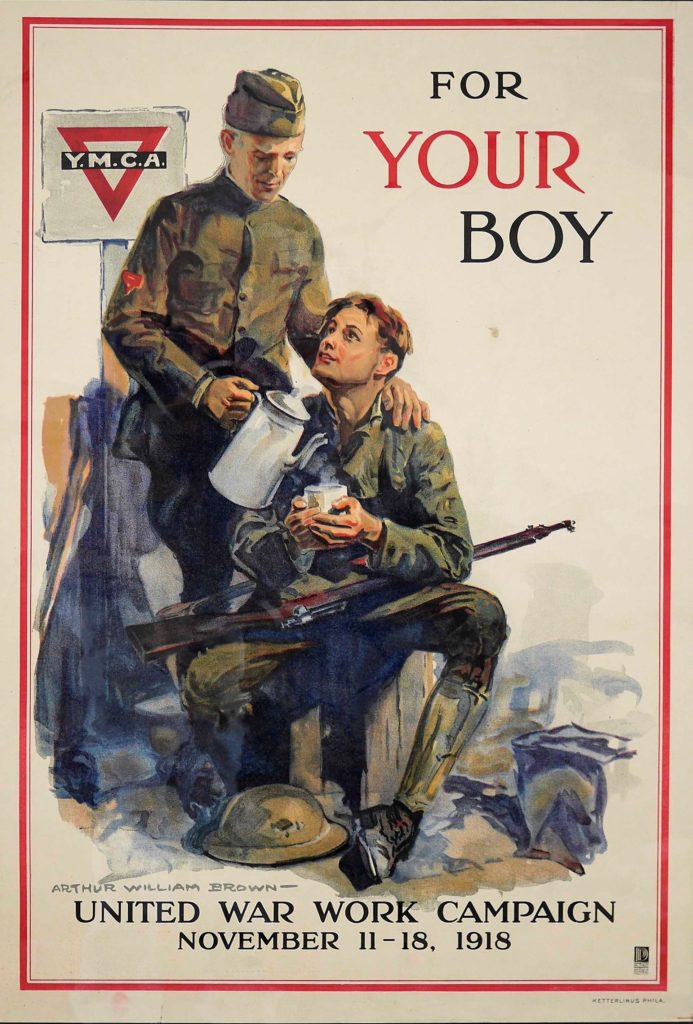 Poster for United War Work Campaign
“For Your Boy” by Arthur William Brown, 20 in. x 30 in.
(Poster from collection A&M 1957, World War I Posters) 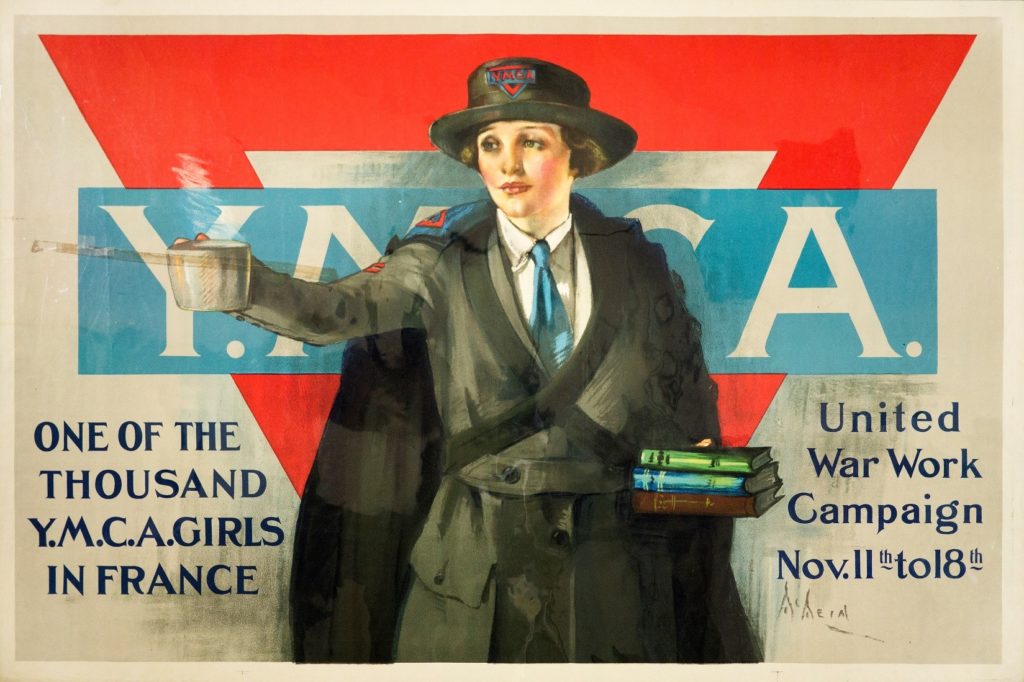 Poster for United War Work Campaign
“One of the Thousand Y.M.C.A. Girls in France”
by Neysa McMein, 28 in. x 42 in.
(Poster from collection A&M 1957, World War I Posters) 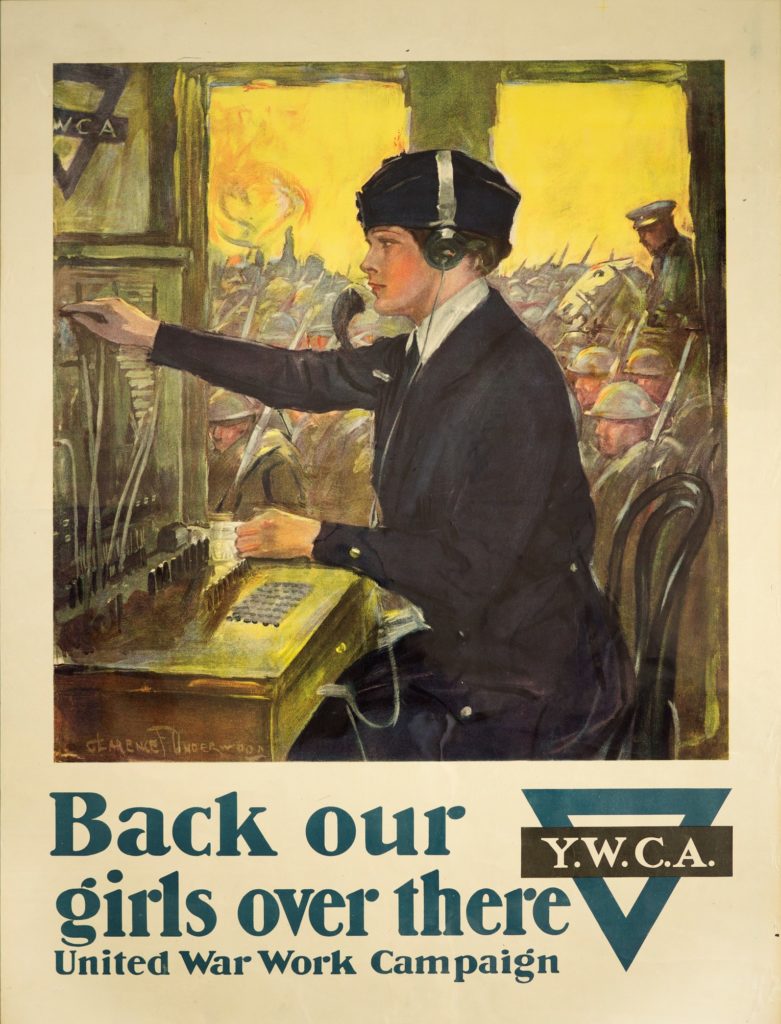 Poster for United War Work Campaign
“Back Our Girls Over There” by Clarence Underwood, 21 in. x 28 in.
(Poster from collection A&M 1957, World War I Posters) 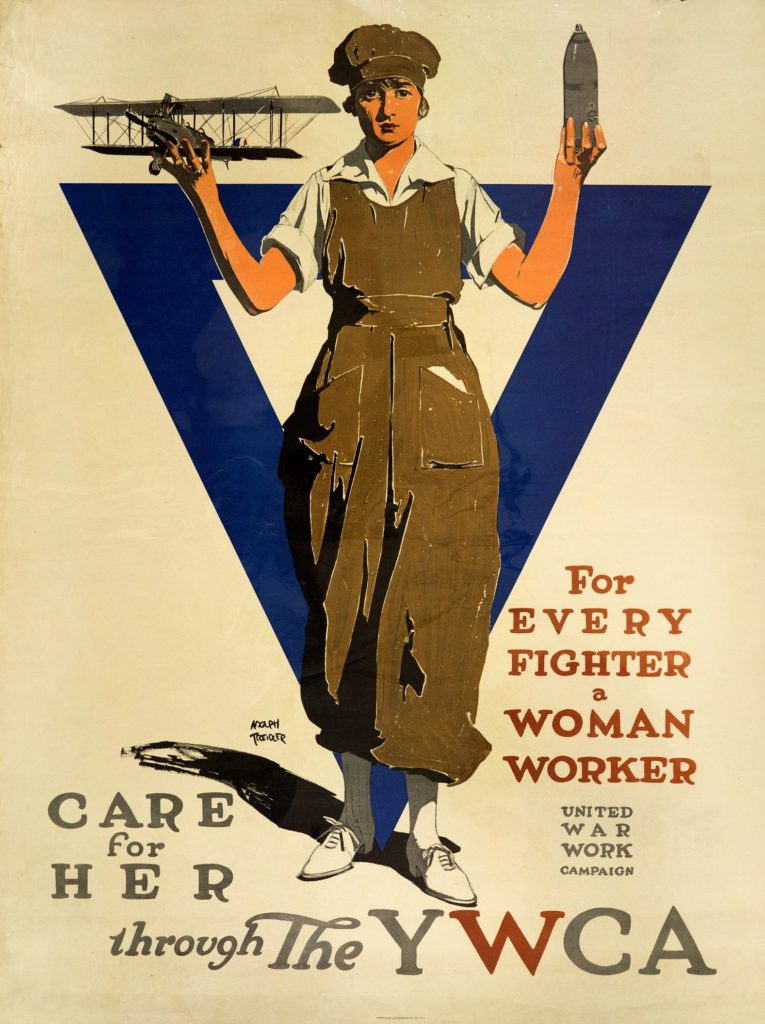 Poster for United War Work Campaign
“For Every Fighter a Woman Worker” by Adolph Treidler, 30 in. x 40 in.
(Poster from collection A&M 1957, World War I Posters)

Another organized effort that emerged from World War I, the “Woman’s Land Army of America,” is represented by a recruitment poster in the collection: 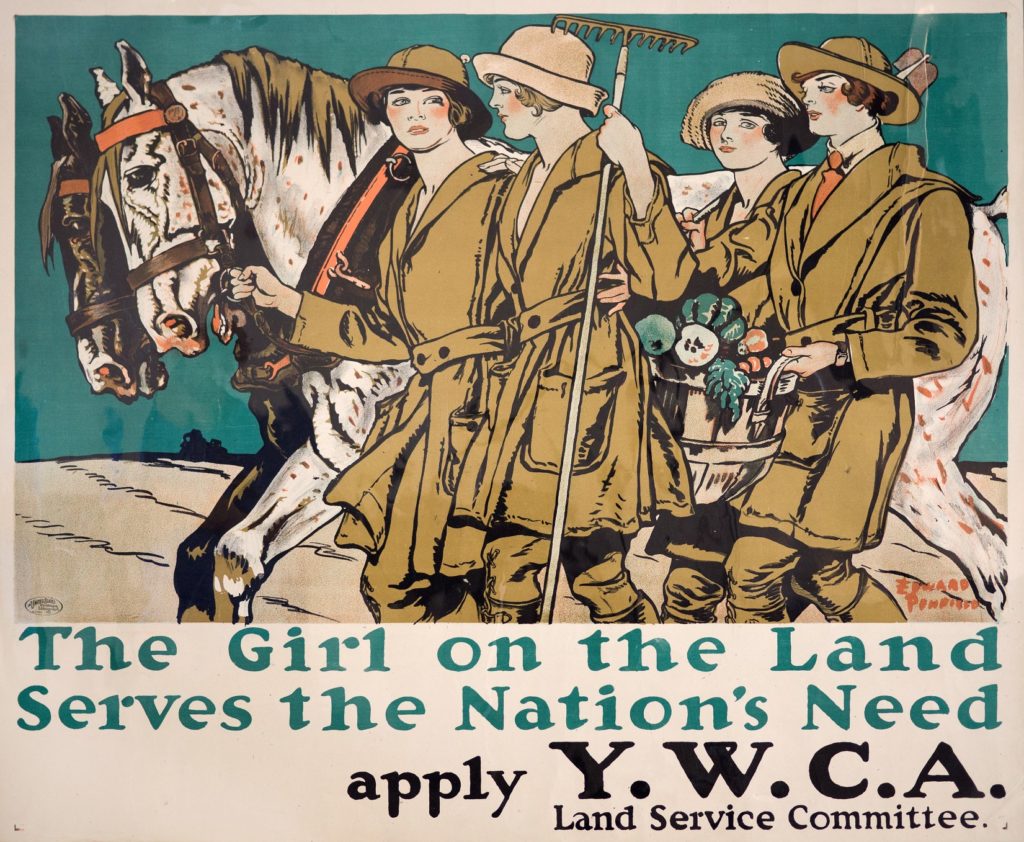 Poster for Woman’s Land Army of America
“The Girl on the Land Serves the Nation’s Need” by Edward Penfield, 25 in. x 30 in.
(Poster from collection A&M 1957, World War I Posters)

Taking over farm work from men serving in the war, this “Land Army” comprised 20,000 women from towns and cities organized by a consortium of women’s organizations, including gardening clubs, suffrage societies, and the YWCA, among others.

This blog provides a large sample of the “World War I Posters” collection at the History Center.  We are pleased to be able to share these artifacts to commemorate the centennial of America’s participation in World War I.

This blog is part of a continuing series commemorating the First World War.  See also:

Smithsonian.com articles:
The Posters That Sold World War I to the American Public, 2014
Before Rosie the Riveter, Farmerettes Went to Work, 2009

Worldwar1.com article:
The History of the YMCA in World War I, 1997