Today I’d like to look at mock foods.  The Oxford Encyclopedia of Food and Drink in America defines “mock foods” in a number of different ways[1].  A mock food can be a dish made with the substitution of a primary ingredient, a food that tastes like another, a dish that looks like another, an economical alternative, a dish with less of a key ingredient, or a dish made with vegetarian alternatives.  Mock foods can trace their roots back to the medieval period, where expert chefs would manipulate the appearance of a dish to impress or entertain eaters.  In one way or another, mock foods have persisted since the medieval period.

Curious about the presence of mock dishes in West Virginia, we turned to the collections at the West Virginia and Regional History Center.  Seven cookbooks sampled by Jessica yielded a dozen different recipes for mock cherry pie, mock apple pie, mock duck, mock oysters, and mock turtle soup.  The presence of mock dishes in these cookbooks indicates their popularity in the region, as most of the cookbooks she sampled were those with recipes submitted by community members.  Mock dishes likely appealed to cooks in West Virginia in the early 1900s who were tasked with creating familiar dishes using the resources at hand.  Resourceful cooks turned to mock dishes because the usual ingredients were either too hard to obtain or expensive.  With West Virginia’s rugged terrain, isolation often forced cooks to creatively bake with what they could get and what they could afford, not just during times of particular hardship such as war or economic downtimes. Mock foods seem like a great COVID-19 pandemic blog suject because they have a bit of a “what can I make with pantry staples without having to mask up and go to the store” vibe.

The mock food item I want to focus on today is mock apple pie.  Mock apple pie has a long history. Thanks to the Food Timeline website’s entry on mock apple pie, I found a recipe for “cracker pie” from the February 14, 1857 issue of the Saturday Evening Post: “CRACKER PIE—As apples are very scarce in many sections of the country, I think the housewife will find the following recipe for making an apple pie out of crackers, very acceptable. For a common sized baking plate, take four of the square or six of the round crackers, a teacupfull of sugar, and a teaspoonfull of tartaric acid; break the crackers into a pint of water, add the sugar and acid and finish as an apple pie.”[2]

Potentially the most well known version of mock apple pie was introduced to Americans by Nabisco in the 1930s, as a way to use their Ritz crackers when apples were perhaps out of season or too expensive. The “Mock Foods” entry in the Oxford Encyclopedia of Food and Drink in America confirms that the Ritz recipe “evolved from mid-nineteenth-century imitation apple pies and mock mince pies, which were made with soda crackers [a.k.a. saltines], sugar, and spices. Crackers have a history of approximating apple pie in both texture and taste.”

That last sentence is where things get contentious.  When I explained to my husband that I would be making this pie and asking him to taste test it, he expressed skepticism at the idea that mock apple pie could taste similar to apple pie, or even be something worth eating.  When I suggested that apple pie doesn’t really taste like apples, and that crackers and spices could come close to the same taste, he expressed mock dismay that I didn’t remember how the apple pies that he makes actually taste like apples.

A Book of Favorite Recipes Compiled by Bruceton Mills Community, 1965, includes two recipes for mock apple pie, both made with Ritz crackers, on pages 44-45. Since the second recipe includes attribution, cinnamon, and a baking time, I decided to try that one. I’ve copied both below in case someone wants to give the first one a try.

Boil together for 2 minutes. Pour this over Ritz crackers and boil 1 minute but do not stir. Put in double crust pie.

Combine sugar, water, and cream of tartar and boil 5 minutes. Add to sugar mixture Ritz crackers, crumbled and cinnamon. Cook 2 minutes longer. Bake in a two crust pie at 425 degrees for 20 to 30 minutes. Serve with whipped cream or cream and sugar if desired.  Filling for 2 pies. [emphasis added]

For anyone else who uses this recipe, I recommend seriously considering your pie plate size versus your filling amount. I used a 9 inch pie plate that was about 2 inches deep, and I made half the recipe, which should have been enough for one pie. The pie filling didn’t fill up the pie as much as I would have liked, leading me to wonder if pie plates were smaller in 1965.

The three people who tasted the pie for me all agreed it turned out better than expected.  The general feeling was that if someone gave you a slice after dinner and you ate it quickly, you wouldn’t question that it was apple pie. The biggest critique is the lack of chunks that would add to the real-apple feeling. I wonder if bakers could overcome this lack of chunks by using a more substantial cracker, or not crumbling the crackers before baking. Overall, I decided this mock apple pie was a satisfying substitution.

If anyone is interested in exploring mock foods at home, there are a few recipes to get you started in one of our digitized texts, Souvenir cook book compiled from the best recipes of members of the Woman’s Club of Harper’s Ferry District, 1915, 1920, which is part of the History Center’s Printed Ephemera Collection. These include mock duck, mock oysters, and mock cherry pie. If you make a mock dish, or if you have any great mock food recommendations, let us know!

The Tradition of Italian Easter Bread

Every year as Easter approaches, if you are lucky, you might catch the scent of baking bread and fragrant anise wafting in the air in my hometown of Clarksburg, West Virginia.  Easter bread, sweet and flavored with anise seed, is a holiday ritual in the Italian-American community here.  With roots stretching back to Calabria, making Easter bread is a foodways tradition that now thrives in North Central West Virginia.

END_OF_DOCUMENT_TOKEN_TO_BE_REPLACED

After my blog post about Shoofly Pie, controversially credited as the WV state dessert on some websites, I’ve been on the lookout for a dessert that would better suit the title of “West Virginia state dessert.”  It has proven to be a real challenge.  My most recent search turned up new ideas (summed up nicely in this WV Gazette Mail article) from hot dogs/mad dogs (tasty pastries that are actually filled with cream) to peanut butter oat cookies (which I love, knowing them from my non-WV childhood as chocolate oatmeal no bake cookies and other less pleasing names).  I kept digging through the internet, seeing apples and molasses pop up a couple of times as quintessential ingredients.  Then, I stumbled on Appalachian Apple Stack Cake.

END_OF_DOCUMENT_TOKEN_TO_BE_REPLACED

In West Virginia, spring brings a selection of new and fresh foods.  Ramps and morels each have a season, as do strawberries and my subject today: rhubarb. 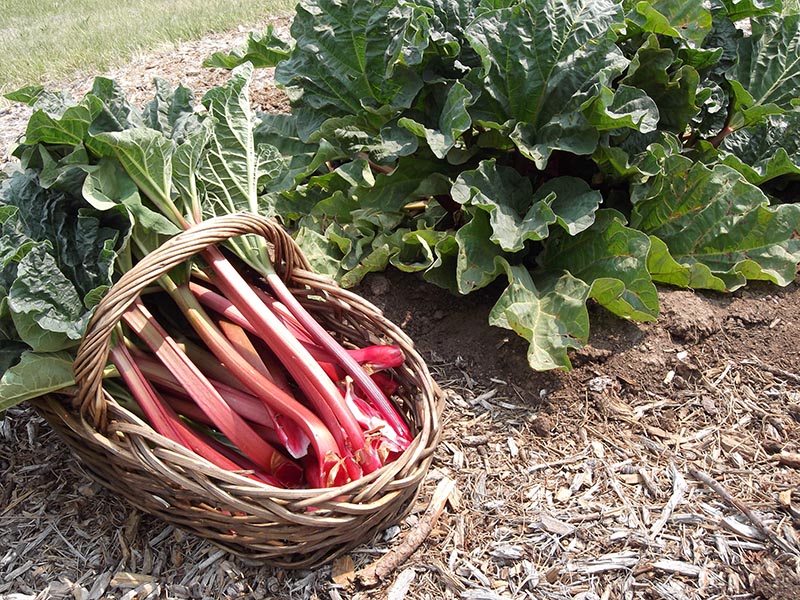 Rhubarb, also called pie plant, is known for its tart flavor. It is considered a vegetable and looks quite a bit like red celery.  But most people prepare it as they would a fruit.  Because of the tartness, it is often sweetened and used in desserts.  Only the stalks can be eaten.  The leaves are poisonous and should not be ingested.  END_OF_DOCUMENT_TOKEN_TO_BE_REPLACED

Fun fact of the day: apple trees are a member of the rose family, and are not native to North America—they spread from Asia through Europe and colonists brought them to this continent in the 1600s. 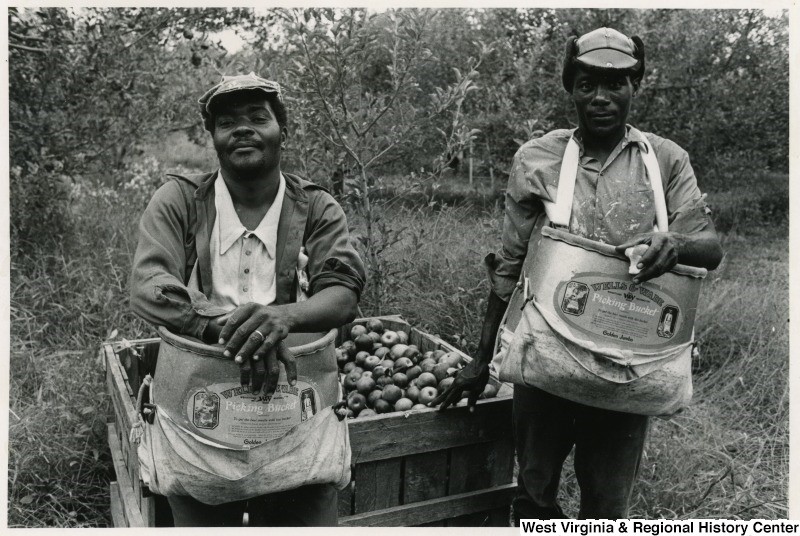 There were once 1000 to 1600 varieties of apples grown in the southern and central Appalachian region, which is pretty astounding considering that they aren’t native and that Wikipedia tells us there are over 7500 cultivars of apple.  As of 2011, one study suggested there were still over 600 distinct varieties grown in the region.  At least two of these cultivars are special West Virginia contributions. END_OF_DOCUMENT_TOKEN_TO_BE_REPLACED

I was not born in West Virginia, and as a non-native, sometimes I make mistakes.  One recent mistake was believing the internet when it told me that shoofly pie is West Virginia’s state dessert.  I thought that would be a good idea for a blog post, maybe comparing a few shoofly pie recipes and commenting on its history in relation to West Virginia.  Then, I learned that there is a wet-bottom and dry-bottom version of this pie—which was more popular in West Virginia, I wondered? So I started asking my coworkers, and learned one very important thing: almost none of the people in my department had shoofly pie before.  I resolved to make one, but I still needed to learn more about West Virginia desserts, and about shoofly pie.  END_OF_DOCUMENT_TOKEN_TO_BE_REPLACED

I wanted to write another blog post combining two things I love, food and history, and my fellow blogger Lori recommended a recently published book that has exactly what I’ve been looking for.  Serving Up History: Savor the Flavors of Early West Virginia Cookery 1776-1860 was written by Martha and Richard Hartley, who researched part of the book here at the WVRHC.  (We are ordering the book for our collection, so check the shelves soon!)  The cookbook is a companion to their earlier book, The Frontier Table: A Treatise & Source Book on Western Virginia Foodways History 1776-1860, and contains over 100 historical recipes with modern translations.  It also has “Cook’s Notes” that contain useful tips or recipe variations, and “Historic Insights” to help modern readers understand the original recipes.  Out of all the fantastic recipes it contains, I chose to make Hasty Pudding, Lemon Pudding, and A.P.s.  END_OF_DOCUMENT_TOKEN_TO_BE_REPLACED

I was searching for a fun old recipe to test for this week’s blog post, and I stumbled on a surprising amount of food history.  To start this story, we’ll have to begin with scrapbooks.  END_OF_DOCUMENT_TOKEN_TO_BE_REPLACED

One of my favorite summertime activities is berry picking.  Every year beginning around July 4 there is an abundance of blackberries on the hill behind my house.  The thickets and brambles line an old well road.  For a few weeks, I spend my free time gathering the berries, then making jams, cobblers and pies.  I look forward to the season every year.  Picking blackberries brings back good memories and makes me feel like a young kid again.  END_OF_DOCUMENT_TOKEN_TO_BE_REPLACED

The WV & Regional History Center is truly filled with treasures – one of my favorites happens to be the Lucy Washington Cookbook, A&M 3212.  Lucy Washington’s grandfather was a nephew of President George Washington.  She lived in Jefferson County, West Virginia, where many Washington family members held land and built homes.  In 1840, Lucy married John Packett.  Their home, Locust Hill, was located near Charles Town.   END_OF_DOCUMENT_TOKEN_TO_BE_REPLACED

Recipes from the Archives

The winter season has long been associated with holidays, friends, family, and food.  For this week’s blog post, we bring you four recipes from the 1800s that show us how Appalachian people from that time would have made popular holiday dishes of today:  pound cake, fruit cake, corn meal rusk (a kind of corn bread eaten for breakfast), and mince pie.

END_OF_DOCUMENT_TOKEN_TO_BE_REPLACED

Tags: Recipe
Posted in West Virginia Collection | Comments Off on Recipes from the Archives